Macbeth Finally Realizes That The Witches And Apparitions

An analysis of Macbeth’s relationship with the other characters in William Shakespeare’s “Macbeth”.

The Macbeth character in Macbeth by William Shakespeare can be played many ways. Macbeth’s relationship with other characters in the play and Aristotle’s theory of a tragedy are ways in which Macbeth is shown as a tragic hero. At the very beginning of the play, Macbeth and Banquo are returning to Scotland from a fierce battle between the Norwegians and the Scottish. They have just won the war for Duncan.

Don't use plagiarized sources. Get your custom essay on
“ Macbeth Finally Realizes That The Witches And Apparitions ”
Get custom paper
NEW! smart matching with writer

Here, Macbeth is interested in what the witches have to say, but he does not really believe them. A few minutes later, Ross enters. He tells Macbeth that the thane of Cawdor is in line for death and that Duncan has named Macbeth the new thane of Cawdor. Now, Macbeth is absolutely shocked. The witches prophecy has come true! He can not believe it! But now Macbeth has a lot more on his mind; the third prophecy about becoming the King. Macbeth knows that if something were to happen to Duncan, Malcolm and Donalbain, Duncan’s sons, would be the rightful heirs to the throne.

How can Macbeth be King when he is nowhere near the next in line to the throne? Another requirement for a tragic hero is that he must have a tragic flaw. Macbeth’s tragic flaw is that of ambition; Macbeth’s ambition will cause him to decline. At this point, Lady Macbeth knows all about the witches prophecies. She really wants to be Queen of Scotland so she encourages Macbeth to do what he has to do to get rid of Duncan. Lady Macbeth is putting an enormous amount of influence on Macbeth. He thinks that Duncan is a great King and he considers Duncan to be a good friend. Finally Macbeth gives in to Lady Macbeth and decides that he will kill Duncan while he is visiting Macbeth’s castle that same night. That night, Macbeth kills Duncan. However, afterwards, Macbeth is feeling very sorry for himself. He can not believe what he has just done. His ambition has caused him to kill a good friend and even worse, the King! Here, Macbeth is going crazy. He is so crazy right now that he brought the daggers he used to kill Duncan with him to his room. Lady Macbeth screams at him to go back to return the daggers but he says “I’ll go no more; I am afraid to think what I have done; Look on ‘t again I dare not.” (A 2, S 2, 51). This is where Lady Macbeth takes control and tells him that “…a little water clears us of this deed.” (A 2, S 2, 67). After a while, Macbeth becomes content with what he has done especially after Malcolm and Donalbain leave Scotland for fear of their lives. Now, the third prophecy has come true; Macbeth is King of Scotland! Now, all Macbeth cares about is his throne. He does not care if he loses his life, if he loses his wife, however if he lost his throne, he would be devastated. This is why he will do absolutely anything to keep the throne, and this is why he ultimately will hire murderers to kill Banquo and will kill Macduff’s family himself. Banquo and Macduff are the only characters in the play that are suspicious of Macbeth. Macbeth knows this so he decides that they need to be killed. Macbeth also wants Banquo and his son dead because of the witches prophecy that Banquo’s sons will become Kings. He hires three murderers to kill Banquo and his son Fleance. They kill Banquo but Fleance escapes. Macbeth is outraged when he hears this. He says: Then comes my fit again; I had else been perfect, Whole as the marble, founded as the rock, As broad and general as the casing air. But now I am cabined, cribbed, confined, bound in To saucy doubts and fears. But Banquo’s safe? (A 3, S 4, 21) To add to Macbeth’s outrage, he begins to see things at a banquet. He sees the ghost of Banquo. No one else in the room sees Banquo and Macbeth thinks that they are messing with his mind. Macbeth says “Which of you have done this?” and “Thou canst not say I did it; never shake thy gory locks at me.” (A 3, S 4, 48). Macbeth becomes ever more outraged and he starts to yell and scream at everyone in the room. Lady Macbeth senses that something is definitely wrong and she asks everyone to leave immediately. Macbeth’s decline is clearly evident now. Macbeth is shown as a hubris character. He thought nothing of killing Duncan nor of Banquo. He was not afraid of the consequences of his actions although he knew very well what they would be. This is another part of Aristotle’s theory. Next, the witches come to see Macbeth again. They tell him three apparitions. They say to beware Macduff, beware that which is not born of woman, and beware of Birnam woods coming towards him. Macbeth laughs this off. He is not afraid of Macduff, he does not think that anyone can be not born of woman, and he thinks there is no way the woods can get up and move towards him. Macbeth thinks he has it made; that nothing can take his crown away from him now. This is another example of hubris in the character of Macbeth. The once forgotten great warrior Macbeth is shown once again at the end of the play when Macduff challenges Macbeth to a fight. At first Macbeth says he will not fight, so Macduff says “Then yield thee, coward…” (A 5, S 8, 23). Macbeth answers “I will not yield…” (A 5, S 8, 28). Macbeth finally realizes what he has done and how the witches prophecies and apparitions have all come true, but he will not just give up like a coward. He will fight like the great warrior he once was. He will fight to his death! According to Aristotle’s theory, in order for a character to be a tragic hero, the character must not be a saint nor a villain, he should have some virtues, have a tragic flaw, and have hubris. Macbeth meets all of these requirements, and can therefore be called a tragic hero.

Macbeth Finally Realizes That The Witches And Apparitions. (2020, Jun 02). Retrieved from http://studymoose.com/macbeth-4-3-new-essay 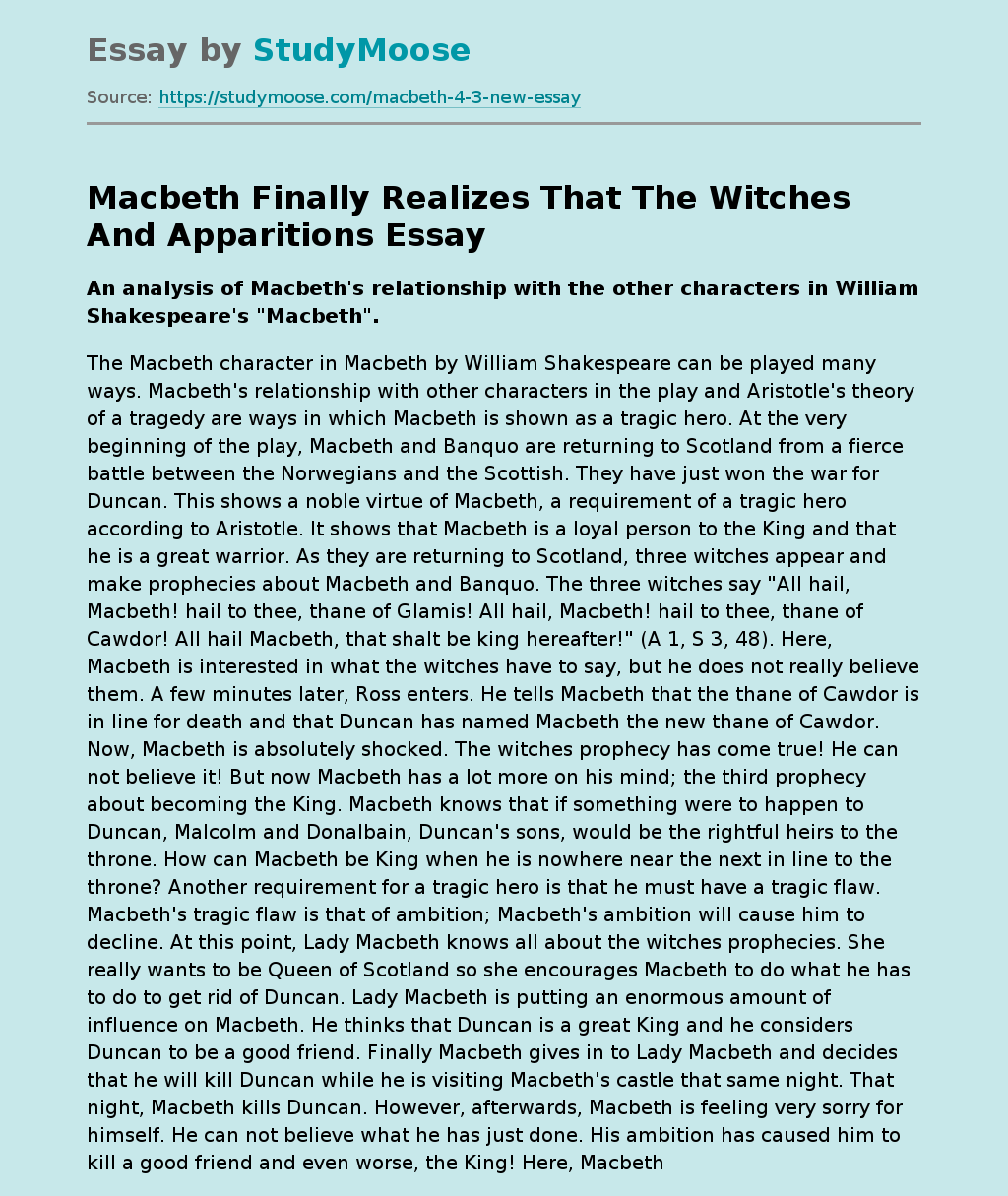