What is the dramatic function and importance of the weird sisters in Act 1 of Macbeth?

The weird sisters in Macbeth serve several functions in the play. This is an essay, which will examine each of these functions in detail and compare to see which is most important and why it is the most important. My essay will start off with the general over look of the witches in the first Act and their overall characters in the play. In the next paragraph I will look at how the witches provide an exciting and interesting opening, which sets the scene for the rest of the play to build on.

Don't use plagiarized sources. Get your custom essay on
“ What is the dramatic function and importance of the weird sisters in Act 1 of Macbeth? ”
Get custom paper
NEW! smart matching with writer

After I have explained that I will move on how the witches affect the whole story line and help Macbeth and his wife in the path, which they choose to take in the play. My last paragraph will be the conclusion, which is where I will round everything up and finally end my essay.

The first thing noticed about the witches is that in all scenes in which they partake there is a roll of thunder when they enter.

There is always a misty fog around them it seems and the way the talk matches the eerie settings and weather they appear in.

The witches always talk in equivocal ways; they will speak together finishing off each other’s sentences and talking in unison. The witches speak to otherwise unmentioned familiars. In theatre these are often two cats and a toad. In this essay reading it you must remember that Shakespeare probably included witches because the audience would have been far more superstitious, also the king at the time was James the first who was very interested of things of this nature.

He also hated the Scottish, which is perhaps why Shakespeare set Macbeth in Scotland. That is how ever wandering off the subject of the witches. Even though the whole play has a certain degree of rhyme in it the witches the degree is stepped up another level. They speak in chants and riddles; almost always what the witches will connect with another part of the play. Here are some examples of this; in the first scene of the first act all that is said relates to another part of the drama such as when the witches say “When the

Hurly-burly’s done, When the battle’s lost and won” relating to the battle being fought by Macbeth and Macdonwald, they also talk about when the will meet next they mention here that they plan or at least know they are going to meet Macbeth there. The reactions of Macbeth and Banqou are very different this is because of the personalities so the witches show us more into two of the main characters personalities which gives the witches another reason that the witches have a large dramatic function in the first act, Macbeth’s reaction helps us see into Macbeth’s character.

Through Macbeth’s reaction we see that he is ambitious we see he is obviously superstitious and believes these witches speak the truth. He does not know if the news is good or bad but feels it is true and he may have to do something to make it happen. In the same scene but after the witches have gone Macbeth is already speaking aside to himself already thinking about killing the king.

One of the many reasons that the witches have such a big part in the play is their exciting eerie appearance in the opening scene. Shakespeare opens with thunder. This weather sets the mood of the play even without the witches. Next in the scene we have the witches planning when they are next to meet we here them talking about Macbeth which holds the mind as the main character is mentioned for the first time.

The witches talk about chaos and evil and things that are not all what they seem, this is one of the major themes in Macbeth, Macbeth’s wife tells him to “look like the innocent flower, But be the serpent underneath.” Also the second batch of predictions the witches give Macbeth prophecies, which seem to work his way when actually they are just telling him of his downfall. So the real point of the witches being in the first scene is that they set the keynote of the drama and If the audience poem is listening very carefully let slip a few things which are going to happen and set out the main feelings of the play.

Now one may say that Macbeth would not have killed Duncan and his best friend Banqou, if the witches had not interfered. So maybe he would have not killed the king at that time in his life but his ambition and power hunger would eat way at him in time and he would eventually try to take the throne. Others would disagree saying the witches were only telling him what he wanted to hear to feed his ambition so in fact they were not seeing into the future they were just manipulating his thoughts and his actions. This what I personally believe also but I think the witches could see into the future but I do think Macbeth would not of committed his treasonous acts if the witches had not played with his mind in the way they did. The witches do not answer any of Macbeth’s questions directly.

They give only the information they know will twist him and corrupt his heart. Although Lady Macbeth never meets the witches they affect her greatly for when she receives the letter from Macbeth she immediately comes up with the same idea of killing the king the idea has arisen in my mind that the idea was put there by a spell or some kind of magic. But the thing with Shakespeare Is that all different theatre, drama and film companies will relay the different aspects of the play in different ways as it is when you read Shakespeare each different person realise different things.

Whether these are the ideas Shakespeare had himself or not, there are still many things you can read into in this book like all his others. Lady Macbeth is sometimes called the fourth witch for the way she speaks, also because it is she who helps Macbeth carry out the murder when he hesitates, and helps him plan all of his deeds. The witches are what in all make the story line which is why they play such a big part in the play overall.

In conclusion I think the witches are possibly the most important characters in this play except for Macbeth himself for they almost dictate to him what he does. They also create an exciting, gripping introduction to the play that still sets the scene and mood for the rest of the play. Also because there characters are more obscure than the others in this play they create a higher level of interest for audience. I think the factor of the Witches dictating the story is the witches’ biggest dramatic function however exciting the opening scene it is only a short passage in the whole book and the other factor affects the whole of the play, the witches bind the story together so therefore they have a very large function in this play.

What is the dramatic function and importance of the weird sisters in Act 1 of Macbeth?. (2017, Oct 20). Retrieved from https://studymoose.com/what-is-the-dramatic-function-and-importance-of-the-weird-sisters-in-act-1-of-macbeth-essay 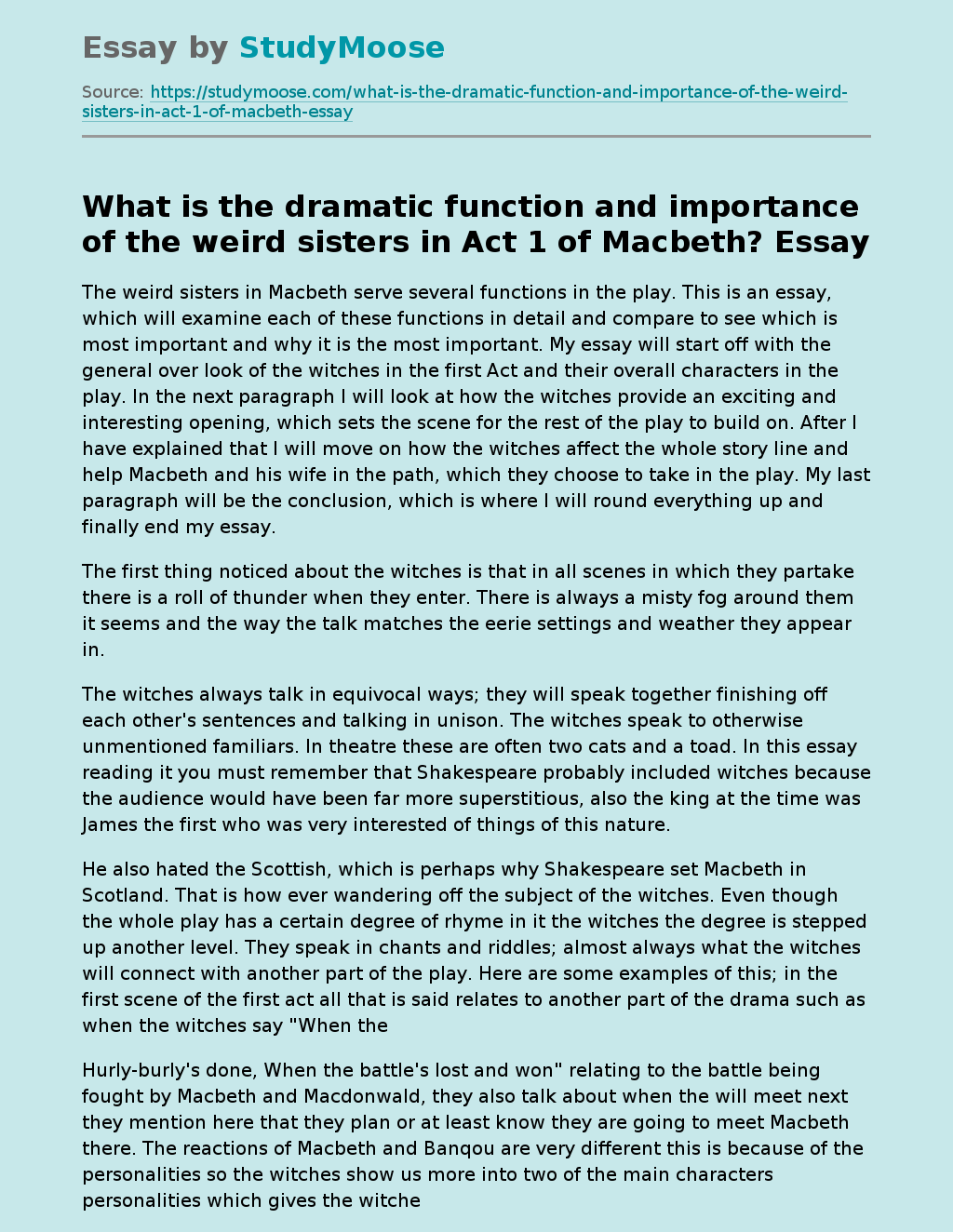