Why Are the Witches so Important in Macbeth?

In order to judge why the witches are so important in the play ‘Macbeth’ ,by William Shakespeare, we need to consider many aspects. Aspects such as the witches’ part in the play; the language used both by the witches and others who describe them; the actions of the witches throughout the play ; the setting that Shakespeare chooses and the effect that the witches have on other characters, and not forgetting society at the time, all have to be considered . The way that the directors have chosen to present them also plays an important part in the play as here we have characters who are very different, unique and rather bizarre!

This is a play about Macbeth, initially a good and noble man… and his downfall.

It is a play which encompasses tragedy, murder, cunning, guile, betrayal, madness, ambition, revenge, guilt, history, prophecy and the supernatural . We also need to remember that this is also a play set in times (the early 1600s) which were very different to nowadays, set in times which were not technologically advanced and set in times when beliefs were quite different .

These were times when people believed in witches!

In Shakespeare’s time, people often blamed disasters and misfortunes on witches and witchcraft. Witchcraft means the use of magical powers and the supernatural to control happenings. Because people could not explain odd happenings in any other way , they would blame witchcraft. When Shakespeare wrote this play, the king of England was King James 1. It is said that he was very afraid of witchcraft, so much so that he made a law in parliament stating :’Death to anyone practising witchcraft’.

Many people also believed that witches were the devil’s helpers and thus Witch Hunts became very popular at this time. It is apt, therefore, that the play begins with the introduction of the witches, through which Shakespeare shows evil as a supernatural force.

By beginning the play in this way, the scene is set for a play full of evil. The audience can be in no doubt that this is a play about pure evil fighting the forces of good. The dark mood (‘A desert place’.’Thunder and lightning’.) is set as soon as the play begins and the witches show their powers:

‘When shall we three meet again?
In thunder, lightning or in rain?’

This highlights the fact that the witches are not afraid of the weather, even though society at the time might have been. Storms are quite normal for us nowadays yet for people at that time, thunder and lightning might have been quite terrifying if they didn’t understand it. In addition to this, the witches think that they can control the weather, along with controlling Macbeth, whom they plan to meet in order to lure him to his downfall. Chanting in rhyming couplets, the witches add to the tension when they continue in the same style :

‘Fair is foul and foul is fair’
Hover through the fog and filthy air.’

Emphasising the fact the things are not like they really seem, these witchy women leave us in no doubt that Macbeth is in for a struggle and the use of the word ’filthy’ is a stark reminder of this. Added to this, the witches seem to chant in riddles, another clever ploy by Shakespeare to keep the audience intrigued by what is happening…and to portray them differently from the other characters in the play. Act 1 Scene 1 also introduces us to the main character of the play, Macbeth. Although we know nothing about him at this point, we can guess what will happen to him…as the witches seem to have this all mapped out! Their quest continues.

We next meet the witches in Act 1 Scene 3. Macbeth and Banquo are returning from battle and meet the witches, who predict that Macbeth will become King. It is interesting to note that when Macbeth enters, he reiterates similar words to the witches’ earlier words:

Could it be that Macbeth might be, in some way, in league with the witches and therefore, evil? Or maybe this is a first ‘hint’ that Macbeth is on his way to becoming like them. Banquo, meanwhile, remarks on their appearance:

This presents a very good picture of the weird sisters, emphasising to the audience that witches were ugly, nasty creatures. The audience of the time would be happy to hear this! However, Macbeth, even though he has been promised good things, seems afraid. He appears to be most disturbed by the witches’ presence. Yet, soon after this, Macbeth is given the news that he is indeed now Thane of Cawdor! Banquo is more cautious. He, too, is suspicious of the witches and brands them as, ‘Instruments of darkness’:

‘And oftentimes to win us to our harm,
The instruments of darkness tell us truths,
Win us with honest trifles to betray’s
In deepest confidence.’

Banquo is sensibly advising that Macbeth be cautious, the forces of evil can deceive! Macbeth , however, is in turmoil and this is where he speaks his soliloquy directly to the audience, which gives the audience some idea of his innermost thoughts.

‘This supernatural soliciting, cannot be ill, cannot be good… If ill why hath it given me the earnest of success……if good…’

Macbeth is posing the questions that if the witches were evil then why have good things happened? And why, even if the good has happened, does his body react in such a violent way? Macbeth is completely puzzled. Are the witches on his side or not? Yet more terrifying is the mention of the word ‘murder’ in his speech.

‘My thought whose murder yet is but fantastical…’

Here is a word (cleverly) not mentioned by the witches, and yet the seed that has been planted in Macbeth’s mind is now firmly planted in the audience’s, as well!! And so murder becomes the order of the day! Murder, because Macbeth is ambitious.

Macbeth is ambitious, but not as ambitious as his wife, Lady Macbeth. Her lust for power and her powers of persuasion, eventually lead Macbeth to kill King Duncan. Macbeth, a man who once knew the difference between right and wrong, has became tempted to do the most dirty deed. Following Lady Macbeth’s accusations about Macbeth lacking courage, he goes against his better judgement. The witches’ predictions seem to be coming true!

Furthermore, when time has passed and Macbeth is now king, Banquo becomes the next victim. Banquo is a man who has remained loyal to Macbeth until the end ,yet Macbeth is afraid of Banquo. Banquo is clever and wise and because his children will be future kings, Macbeth decides that he has to murder Banquo, in order to prevent this from occuring. He sees Banquo as his enemy and enemies have to be disposed of. Yet Banquo was the one to warn Macbeth about the real enemies. It seems as if the witches have continued to weave their web of destruction . Macbeth,who is now more powerful yet more disturbed than ever, decides to visit them .It is important to note that he finds them, they do not visit him.

A ‘fiery cauldron’ awaits him and the witches are obviously expecting him:

‘By the pricking of my thumbs,
Something wicked this way comes ‘

They liken Macbeth to themselves, evil, as they continue to mix and stir their confusion of gruel and chant their magical spells. The weather is as it was at the start of the play. The dark scene is repeated and emphasised . But Macbeth, at first, seems more at ease with them, simply wanting to know what the future will bring for him. They come forth with yet more prophecies, which they know will destroy him completely. An apparition appears before Macbeth, in the form of a head, wearing armour, (Macbeth mistakenly interprets this as Macduff).A second apparition, is that of a bloodied child:

‘Nobody born of woman will harm Macbeth’

Macbeth misinterprets this. Yet, unbeknown to Macbeth, Macduff was untimely ripped from his mother’s womb. The third apparition is of a child, crowned, with a tree in his hand. This is Malcolm,who eventually becomes king. Macbeth is afraid of children because he fears what they might grow into. The witches then give him a glimpse of ‘the future’. Macbeth is shocked to realise that his crown is only a temporary one as the witches show him that the many future kings are Banquo’s descendents, not his. Macbeth curses them for their trickery. The witches mock him and then disappear ,leaving him to wallow in his own despair. Because of his incorrect interpretations of the apparitions, Macbeth continues his savagery by having Lady Macduff and her children murdered, which in turn prompts Macduff to kill Macbeth.

As Macbeth’s head is put on a pole, the audience realises that this was the first of the apparitions and that the second and third have also come true. The witches are once more proven right…their prophecies have come true Their power and influence over Macbeth, once a man of code and honour, has been immense. If they can have this power over a man such as Macbeth, then what sort of power would they have over the ordinary man of the 1600s ? It is so important to remember the time in which this play was set and the beliefs at the time. Witchcraft does exist nowadays be it in a different form and not with the same power to shock. In the 1600s, witchcraft and the devil went hand in hand. A witch’s role was different to that of a witch nowadays .

Therefore, the role of the witches is of utmost importance to the play, Macbeth, We can ask, did the witches really exist? Or did they simply exist in his head, as voices? It seems quite odd that, if they did exist, then Macbeth was always able to find them!! But their beards, weird potions and strange rhymed chanting (the most famous being ‘bubble bubble toil and trouble’) all add to the character of these weird symbols of the supernatural. Whether Macbeth was the victim of such evil influences as these i.e. the witches messing with his mind, or whether the evil was already in him and just needed ‘egging on’, one thing is certain: without the witches in this play there would be no confrontation between the forces of good and evil, which is the key theme throughout the play. I enjoyed the play a great deal but I was left wondering what it might have been like watching it on stage in the 1600s, amidst an audience who would have had a fascination with the supernatural.

Why Are the Witches so Important in Macbeth?. (2016, Oct 10). Retrieved from http://studymoose.com/why-are-the-witches-so-important-in-macbeth-essay 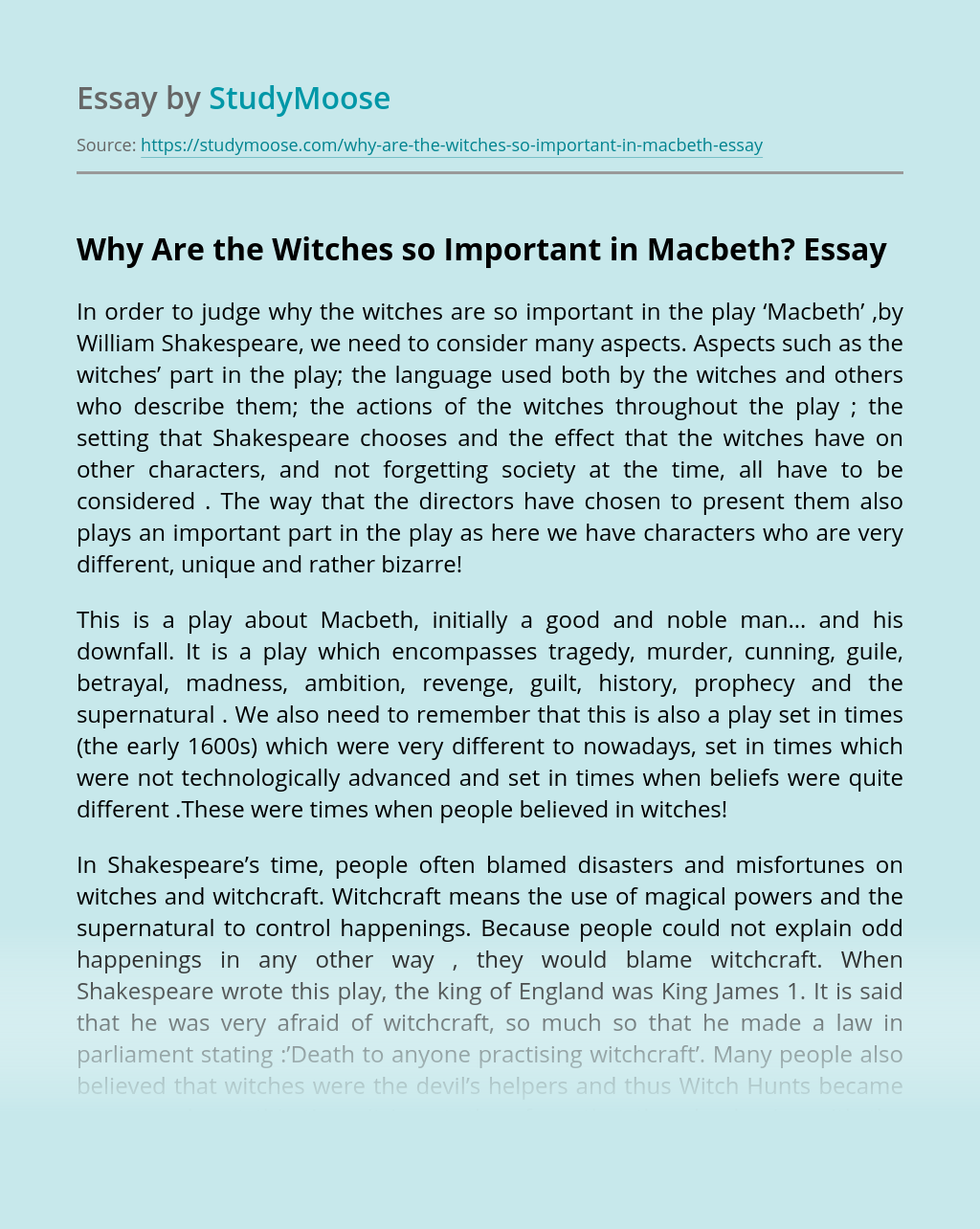 Don’t waste time
Get a verified expert to help you with Why Are the Witches so Important in Macbeth?
Hire verified expert
$35.80 for a 2-page paper
Stay Safe, Stay Original