Apply or Explain vs Comply or Else

The King II code only applied to certain entities and followed a rule-based based approach hence “Comply or Else” or mandatory corporate governance. “Comply or Else” refers to the companies obligation to abide by corporate governance standards. These standards are written into law and regulations and have to be obeyed. Failure to obey these standards and regulations may/will result into sanctions such as fines for the corporations, imprisonment of executive manager/director and prevention from listing or trading on the stock exchange.

Don't use plagiarized sources.
Get Your Custom Essay on Apply or Explain vs Comply or Else Just from $13,9/Page

The King III applies to all entities whether it be public, private sectors or non-profit sectors and regardless to the form of the establishment example a private company. This code, unlike its predecessor, is principle-based rather than rule-based in other words voluntary corporate governance. Hence “Apply or Explain”. Advise and explanation is the theme in “Apply or Explain” – corporate governance standards are recommendations on principles and practices rather than strict rules, that companies are advised to act accordingly to.

Thus companies are allowed to use own discretion on whether to apply to the recommended principles and practices however it is expected of each company to explain why it chose not to comply in for example annual reports. In order for this approach to be effective companies must have regular reports and for its stakeholders to critically scrutinise these reports for relevance and accuracy.

To conclude this section of the question, I would say that there has been in increase in the emphasis on philosophical premises from King II to King III. All companies have now been included and the theoretical part of the philosophies are being emphasised. Philosophies are only theories and cannot always be applied as rules can be applied. King III gives corporations the freedom to choose which principle and practice will suit their company the best and apply but only with a good explanation for it.

Apply or Explain vs Comply or Else. (2016, Dec 28). Retrieved from https://studymoose.com/apply-or-explain-vs-comply-or-else-essay 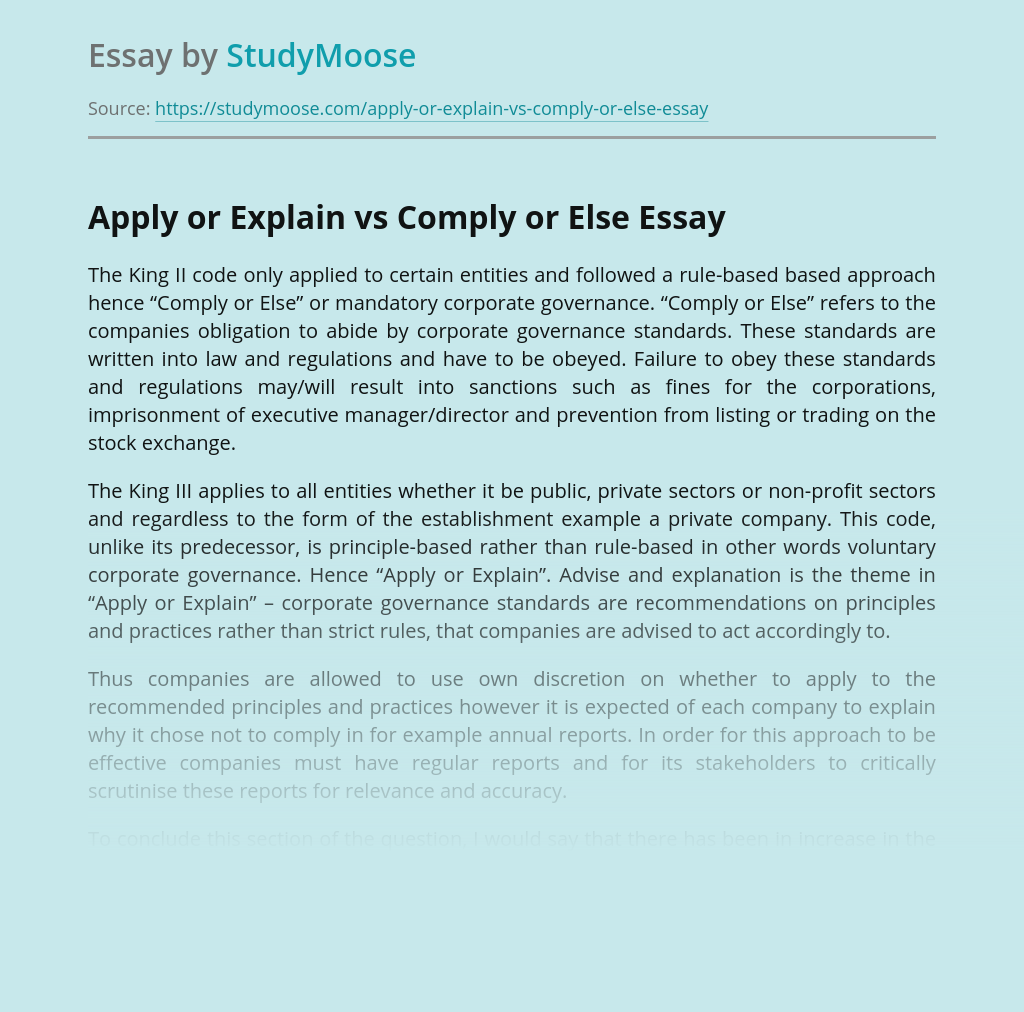 The Searchers (1956, John Ford) explores themes of family, community, and morality on the edge of the uncivilized Western frontier. The story takes place several years after the end of the Civil War in a remote region of Texas, where the Comanche are a constant and mortal threat to the few settlers on the thinly...

Business forecasting is the process of studying historical performance for the purpose of using the knowledge gained to project future business conditions so that decisions can be made today that will aid in the achievement of established goals. Forecasting plays a crucial role in today’s uncertain global marketplace. Forecasting is traditionally either qualitative or quantitative,...

View sample
Get Essay
The things I carry

As usually every day of my life I must carry something in my wallet in somewhere of my bag, they might be some utensils, as an eraser, books, etc. But among the most important things I carry with me are those things, which I keep a great respect, or some things that their value have...

I was told in my earlier years that a teacher is one who imparts knowledge. If that definition is accurate, then all of us as human beings qualify as teachers. In fact, we all impart knowledge at one point or another in our lives. However, a professional teacher is one who is trained and assigned...

In this chapter on Crisis in Family, the death of one’s child, parent, or suicide of a close family member can cause a devastating crisis within a marriage. Mothers and fathers relate to death in different ways, which causes conflict within the marriage. Depending on the circumstances of the death, one spouse may accuse the...