The telephone call by Dorothy Parker

The first thing we should mention analyzing this story is historical and cultural context. Speaking of historical context we should presuppose that it’s the very beginning of the 20th century, the USA. I would like to say a few words about the author and the story I’m going to analyze further.

The text under analysis is the short story “The telephone call” belonging to the pen of Dorothy Parker, an American poet, short story writer, critic and satirist, best known for her wit, wisecracks, and eye for 20th-century urban foibles.

Turn in your highest-quality paper
Get a qualified writer to help you with
“ The telephone call by Dorothy Parker ”
Get high-quality paper
NEW! AI matching with writer

The author is the master of psychological analysis. Her works are marked by a deep penetration into the soul of man. What can be valued most in the author’s works is her brilliant vivid style, refined treatment of characters, deep insight into human nature and powers of psychological analysis. Parker rose to acclaim, both for her literary output in such venues as The New Yorker and as a founding member of the Algonquin Round Table.

Following the breakup of the circle, Parker traveled to Hollywood to pursue screenwriting. Her successes there, including two Academy Award nominations, were curtailed as her involvement in left-wing politics led to a place on the Hollywood blacklist. Dismissive of her own talents, she deplored her reputation as a “wisecracker”. Nevertheless, her literary output and reputation for her sharp wit have endured.

In this story the author provided the best portrait of human nature, a woman’s heart. The author manages to boost the reader’s undivided attention from start to finish.

The story opens with the main character’s thoughts about her beloved who promised to call her, but never did. As the story unfolds and the action develops, the reader obtains further information about the characters. The story reaches its climax giving us the new “stage” of her thinking. Now the problem is stated, but there’s no resolution. It’s an open ending story.

Speaking of the title, we can claim that it’s rather plain and obscure, though partly understandable. After reading the story we understand the gist of it, the real meaning of the title implied. The protagonist is expecting a phone call from her beloved, but even when the story ends, she doesn’t receive it. However, in her very heart of hearts, she keeps on hoping he will call her.

Predicting the development of the plot, I would say that, perhaps, there’s going to be a telephone call after which things suddenly change.

I would characterize the style of the story as elevated, subjective, emphatic and informal. The functional style here would be fiction style, I would say. I would define the genre of the story as love, psychological with elements of melodrama, suspense and stream-of-consciousness. The form of the story could be defined as inner represented speech (or a monolog).

It’s the 1st person narration. The narrator is the author himself and she tends to be rather subjective. She seems to live through everything that she describes in the story.

The setting doesn’t tell us much about the time of the events described in the story. The location is the protagonist’s apartment. Perhaps, it’s the very beginning of the 20th century, the USA. The setting is hidden and thus leaves a lot of details up to the reader’s imagination.

Characterizing the plot, we should mention that there’s no prologue. The story starts with an exposition. It gives us more information and helps us understand some basics of the story. Then we pass over to the narrative hook which takes the whole paragraph starting with the words “This is the last time I look…” – and adds complications to the story. Our next point is the rising actions which follow the course of events further finally reaching the false climax/epiphany (“I wish he were dead”). It is followed by the falling actions. Then, I would say there’s no actual resolution, it’s an open ending story. There would be no epilogue. The author combines direct and indirect methods.

There are two characters in the story – the protagonist and her beloved (who’s only mentioned by her). Both of them can be defined as flat and dynamic-static characters. The protagonist herself represents a stereotype. The protagonist may be depicted by such adjectives as incapable of prolonged effort, blunt, impatient, irrational, weak-willed, capricious, ordinary, self-willed, etc. Her beloved (we may only try to guess) – as ambitious, arrogant, deceitful, insincere, etc.

The conflict in this story can be characterized as internal. It takes place within the protagonist as she’s struggling with herself throughout the whole story.

The theme of the story deals with the nature of humanity. The subject can be, perhaps, formulated as “Love brings not only joy and happiness, but also suffering and pain”. But to minimize the negative feelings we should try to get distracted somehow. And try to take things easy.

There aren’t many symbols here, but I would distinguish a few. Firstly, it’s the telephone call in the title of the story. It symbolizes the centre of the protagonist’s life, her only wish. However, there aren’t any telephone calls in the story. Then there’s the telephone itself. The protagonist personifies it and speaks to it. It can give her what she wants, but it doesn’t. It’s like a capricious divinity or maybe some idol. The protagonist counts to five hundred (that may be correlated with the beating of her heart which beats rather fast and shows us her agitation).

Among the stylistic devices which can be found in this story I would distinguish phonetical, lexical and syntactical ones. Phonetical: alliteration: “please, please, please”; “twenty, twenty-five, thirty, thirty-five…” consonance: “I’ll pull your filthy roots out of the wall”. Lexical: epithet: “filthy roots”, “smug black face”

The general atmosphere can be characterized as emotional, tense, dramatic, pathetic.

The telephone call by Dorothy Parker. (2016, Mar 31). Retrieved from https://studymoose.com/the-telephone-call-by-dorothy-parker-essay 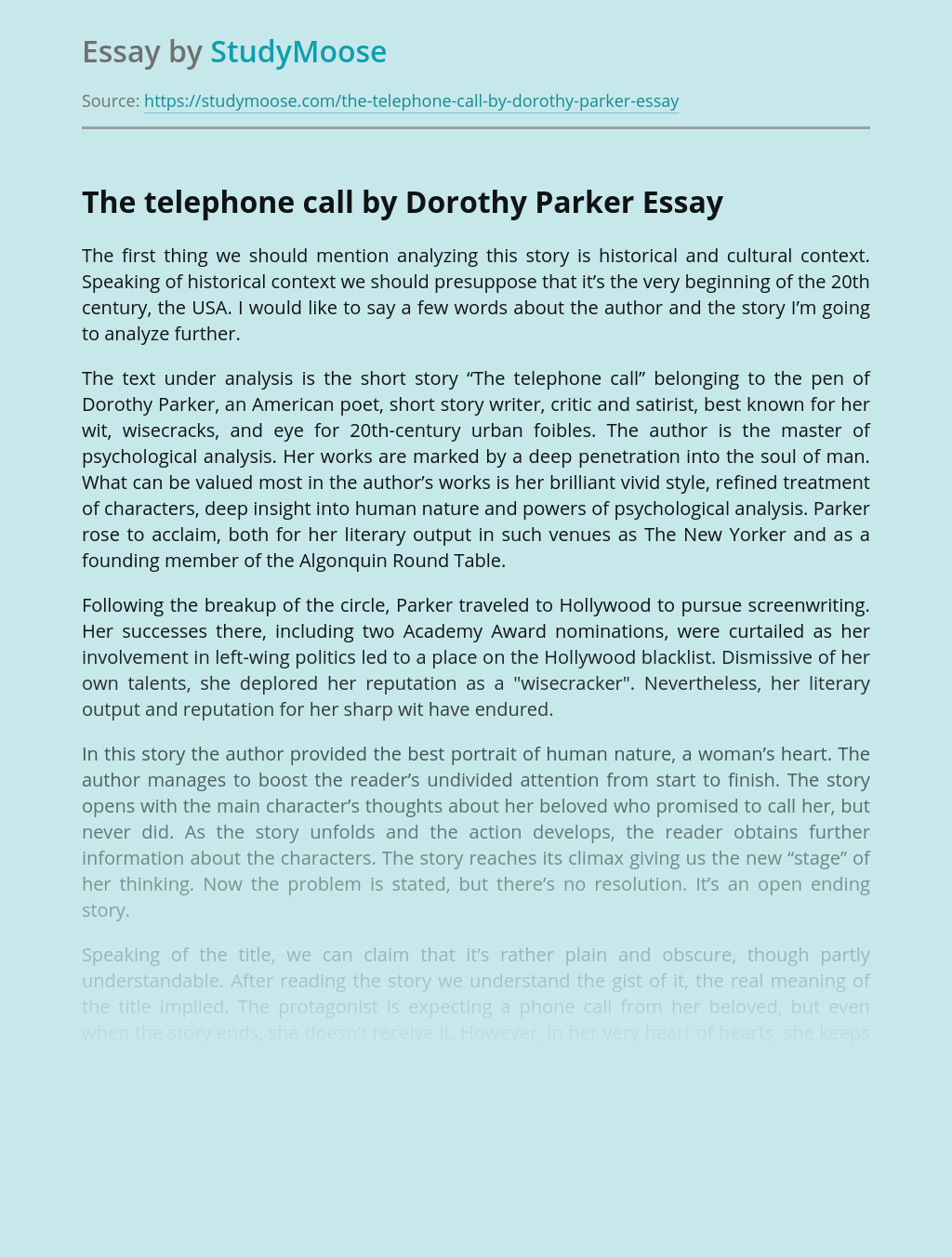 Turn in your highest-quality paper
Get a qualified writer to help you with
“ The telephone call by Dorothy Parker ”
Get high-quality paper
Helping students since 2015
Stay Safe, Stay Original