William Faulkner explains why the story is not about him, but his details about a lonely poor woman named Miss Emily is very unpredictable. Miss Emily is unable to grip the idea of death and suffers from denial. After the death of her father, the people from the town expected her to be in a state of grief but she is not. Instead, she proceeds to say that her father is very well with her and alive. William Faulkner’s idea of grieving is clear in this story because he shows his audience that it is better to accept death than to ignore it through the accounts of Miss Emily’s journey.

Don’t waste time
Get a verified writer to help you with A Rose for Emily: a Themes of Death and Change
Hire verified writer
$35.80 for a 2-page paper

To begin with, one can analyze “A Rose for Emily” by examining the hidden message found in the story. The hidden message that William Faulkner tried to convey in his story was the themes of death and change. For example, Emily told them that her father was not dead. Miss Emily tried to defy death by holding on to her father’s corpse and treating it as if he were still living and how fearful she was of change. She later killed Homer to ensure that he would never leave her.

Miss Emily continually tried to prevent any sort of change through death or other means from occurring in her town. She was so frightened of change that she wouldn’t allow the city to put numbers on her house for mail.

The next step to analyzing “A Rose for Emily” is to examine race found through anthropology. The South was once known for its extreme prejudice and racism. William Faulkner’s attempts to convey this racism is made clear in “A Rose for Emily”. Mr. Faulkner explains the roles of women in the South and how they were seen through the eyes of men. When Miss Emily Grierson died the whole town went to her funeral. The men out of respectful affection for a fallen monument and the women mostly out of curiosity.

In conclusion, there are many aspects that were incorporated into “A Rose for Emily”. William Faulkner was able to create a story involving many ideas about society and how it functioned in a specific time period in the South. To further examine “A Rose for Emily”, one can use the reader response criticism and analyze the aspects of the hidden message found within the story, race found through anthropology, and gender found through anthropology. “A Rose for Emily” is an important element in literature due to examination of the effects of change created in the olden South.

A Rose for Emily: a Themes of Death and Change. (2016, Nov 14). Retrieved from http://studymoose.com/a-rose-for-emily-a-themes-of-death-and-change-essay 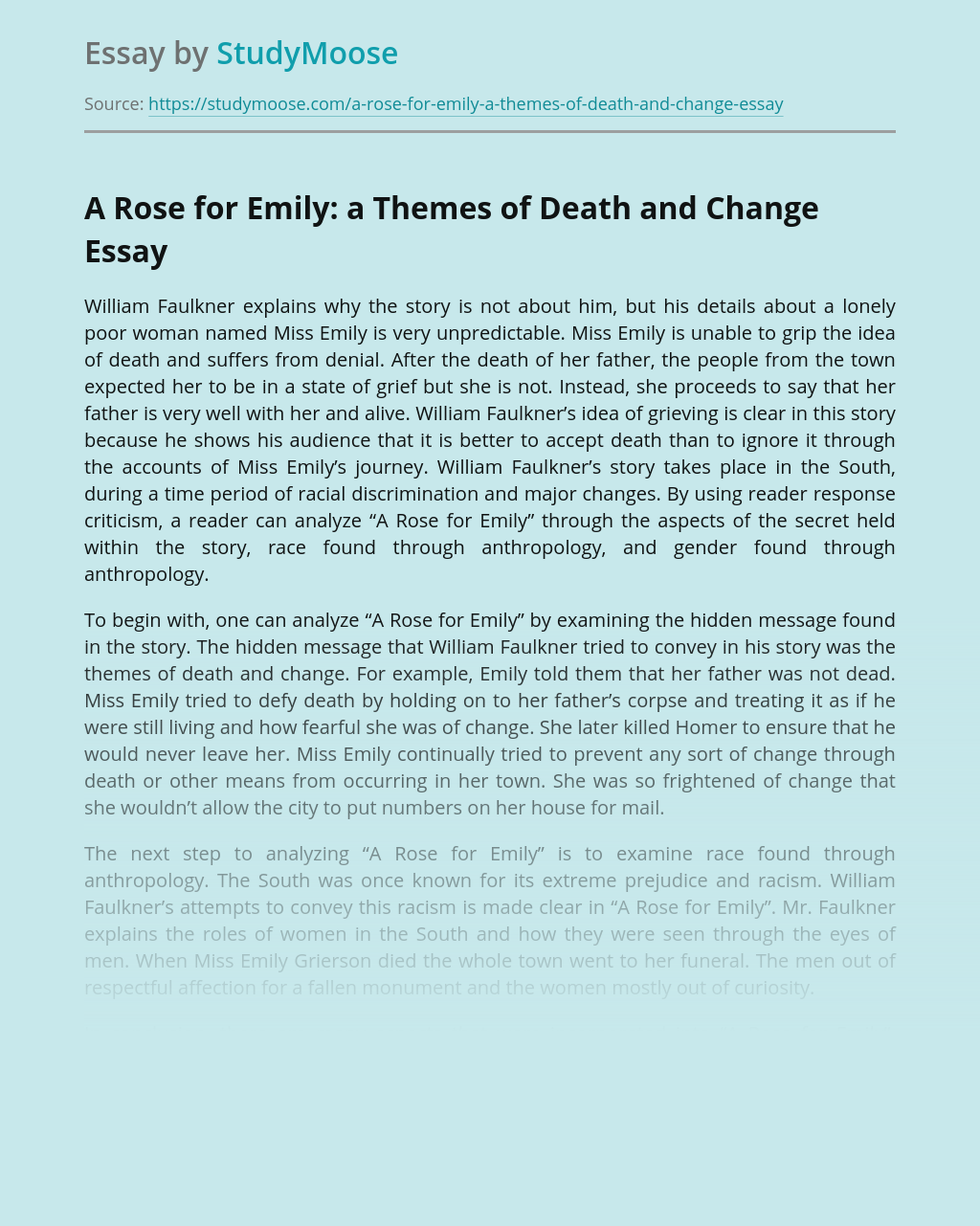 Don’t waste time
Get a verified writer to help you with A Rose for Emily: a Themes of Death and Change
Hire verified writer
$35.80 for a 2-page paper
Stay Safe, Stay Original