The Message in My Papa's Waltz, a Poem by Theodore Roethke

Authors of poetry use elements variety elements of poetry to help readers in better understanding the central idea of their work. These elements include meter, rhyme scheme, personification, and various other components related to poetry. Some authors of poetry will not tell their readers the true meaning or message of their literary work verbatim, as they only rely on the poetry components. This is seen in Theodore Roethke’s, “My Papa’s Waltz”, as the overall message of the poem can only be truly understood once one breaks down the poem.

Don't use plagiarized sources. Get your custom essay on
“ The Message in My Papa’s Waltz, a Poem by Theodore Roethke ”
Get custom paper
NEW! smart matching with writer

Form, diction, and simile in “My Papa’s Waltz”, are the most important elements in the poem as it conveys the importance of the poem. The form of the poem brings important relevance to understanding Roethke’s work. Segments that make up the class of the poem include the type of poem, rhyme scheme, and meter. This poem can be classified as a Modernist poem, as the poem is an open, regular form that does not change.

However, what makes this poem slightly different from most modern poems is its ABABCDCD slant rhyme scheme, rather than the typical free verse. The rhyme can be seen throughout the poem, for example the first stanza states:

The whiskey on your breath

Could make a small boy dizzy;

Roethke made every other line rhyme within the four lined stanzas, which can also be classified as a quatrain. The form and meter of this literary work is considered an iambic trimeter, due to the stress and unstressed syllables alternating with every two lines having three beats.

These elements make this literary work more than a poem, but an actual waltz itself. A waltz is a smooth dance performed by a pair who turn rhythmically in 34 time. The author incorporates the slant rhyme into the poem intentionally as seen in the second stanza, “We romped until the pans / My mother’s countenance (5, 6) to shows that the father is having drunken missteps as he partakes in the dance with his son. Also, the change in syllables that occurs in one line of the poem, “At every step you missed” (11), represents how offbeat the father and son are during the dance. With this, it can be implied that with the rhyme, meter, and syllable patterns ties in with the one of the overall themes of the poem, family. This particular elementsignifies that within the author’s smooth relationship with his father, they are able to create wonderful memories even though it can be imperfect at times.

This interpretation gives the poem a tone of hope, desire, and admiration that both people involved have for each other. Classification of this poem serves significance to the theme. The word choice or diction also serves an important service within the poem in relation to its message. Diction is the choice of words used in a literary work that can be either formal or informal. Roethke uses a combination of both formal and informal word choices in his poem, with the phrase “Such waltzing was not easy” (4) consisting of vocabulary of a child not being very sophisticated, however there is a slight shift in word choice when the author states, “My mother’s countenance”(8), uses an advance word, countenance in describing the mothers frown.Both examples of the word choice Roethke uses have a significant meaning to the short poem. The informal diction puts readers into the perspective of the young boy’s mind, as there is a variety of more knowledgeable ways to describe such an elegant dance; however most young children have not developed such a broad vocabulary.

The formal diction serves as a shift in the poem, as the word countenance is one commonly used to describe one’s facial expression. This particular shift and diction in the poem can imply the relationship and views the boy has of his mother. It is somewhat hinted due to the word choice that the mother tolerates the waltz even though she disapproves of the event greatly; however she is helpless to the situation. This is brings an interest into the particular role the mother plays within the household, as mothers are generally seen as the nurturing one, however this poem displays the clear opposite. A sub element of diction is connotation, the suggestion of a word apart from what is literally meant. Words such as whiskey, romped, and batteredhas a negative tone in nature. One may suggest that when the father participates in a drunken domestic violence due to the original connotation of the words, however, the following words serves a positive purpose in the poem.

According to a literary criticism essay on Adaptive and Maladaptive literature, the connotation of the words “Express the ambivalence and anxiety of an adult, narrating from a child’s view point, who is simply not certain how he felt, or should have felt, about his father (Fuhrman and Turpin). Diction is a significant element used in the poem. Roethke’s uses an extended metaphor in this poem, which is essential to the overall idea of the poem. An extended metaphor is a comparison of two different subjects implicitly that is complex and stretches long section of a literary work. In this case, the entire poem is an extended metaphor. Within the metaphor are a tenor and a vehicle. The tenor is the subject in comparison to vehicle which completes the metaphor. The waltz dance itself is the tenor, as it is the subject in comparison of the relationship between the father and son, the vehicle that completes the metaphor.

With the waltz being a close, intimate dance where one person is the dominator of the dance while the other follows the steps of the leader acts as an abstract idea of love that is compared to the love the boy has for his father, who is the dominator of their relationship and the dance. Within the first stanza of the poem, the narrator explains that “Such waltzing was not easy” (5). Due to the dance being a metaphor throughout the entirety of the poem, it can also be implied that the relationship between the father and son is not an easy one at all, as the father imposes many imperfections. The waltz itself consists of the pair dancing in a circle, which the father and son pair do participate in. This represents that their life consists of going around in circles, which can have many ups and downs when one is enduring the event. Even though the scene of the waltz is not a picture perfect setting, the young boy still has a great admiration of his father.

In the last stanza of the poem, “Then waltzed me off to bed / Still clinging to your shirt” (15-16) shows the deep emotional connections the boy has towards his father. The young boy is unwilling to let go of his father but literally and figuratively. The child suggests that once he wants to hold on to the dear relationship he has with his father for as long as he possibly can, because once he lets go, the inevitable may happen. According to two literary scholars, the extended metaphor “is a metaphor for the adult poet clinging to the indistinct memory of his father (Fuhrman and Turpin). The extended metaphor is essential to the poem. Theodore Roethke uses the poetry elements form, diction, and extended metaphor in his poem, “My Papa’s Waltz. The combinations of the elements help bring importance to the poem that one may not distinguish firsthand. The elements also further convey Roethke’s purpose and underlying themes within the short read. The use of these poetry elements plays an essential role in this poem.

The Message in My Papa's Waltz, a Poem by Theodore Roethke. (2021, Sep 27). Retrieved from https://studymoose.com/the-message-in-my-papa-s-waltz-a-poem-by-theodore-roethke-essay 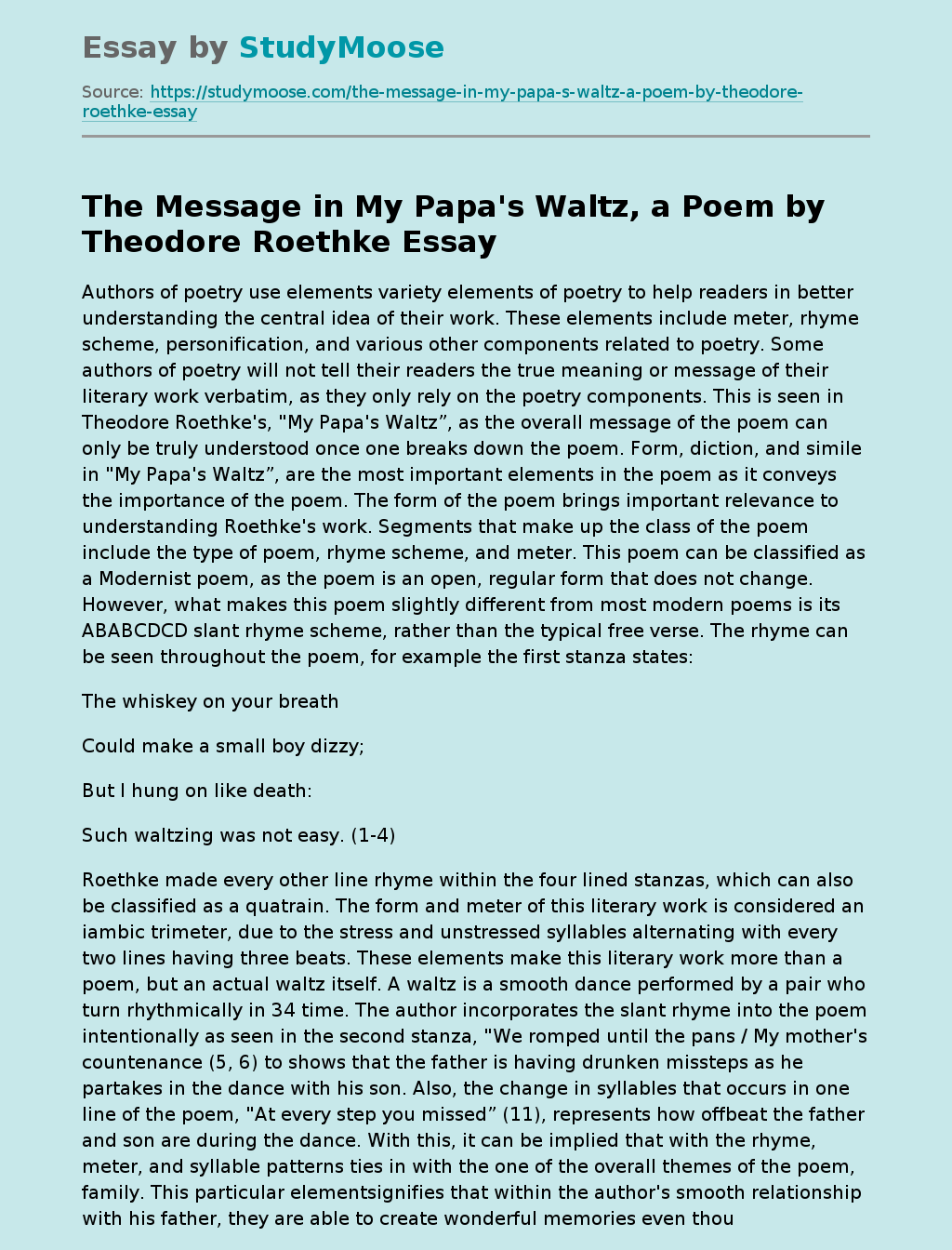