The Family Relationship In My Papa's Waltz

Just as every family is different, the dynamics inside of each family’s relationship are different. The way in which a family can feel and the way in which a family can express emotion varies. While the complications demonstrated inside of Theodore Roethke’s “My Papa’s Waltz” may differ from the nature of our own experiences, there’s no denying that every family presents its own unique dynamics.

Theodore Roethke was born in 1908 to a family of German migrants. His family had moved to Saginaw, Michigan where they owned and operated a successful greenhouse business.

Don't use plagiarized sources. Get your custom essay on
“ The Family Relationship In My Papa’s Waltz ”
Get custom paper
NEW! smart matching with writer

Roethke recalled his home as a wonderful place for a child to grow up in and around’ (“Theodore Roethke.’ Encyclopedia of World Biography). His home life, especially the relationship with his father, and the greenhouse, where he spent a lot of his time, were very influential to his later writings.

Roethke’s father, Otto, was known as a hardworking man, as he ran the largest greenhouse in the state with his brother, Charlie Roethke.

Proficient in: Importance Of Family Relationships

Otto was also known “as a stern, short-tempered man…” (Ettari, Gary. “Roethke, Theodore.”) and an “authoritarian” (Paoli, Dennis. ‘Roethke, Theodore.’). Roethke still admired and loved his father although he had somewhat of a convoluted relationship with him. He worked hard for the approval of his father, as any boy would in the early 1900s. But Otto “held extremely high expectations that were not always possible for his son to achieve” (‘My Papa’s Waltz.’ Poetry for Students). Sadly, when Roethke was only 14 his father passed away.

He was left without a father during his teenage years, which is a very impressionable time. “Roethke was never able to fully reconcile his feelings before his father’s death” (‘My Papa’s Waltz.’ Poetry for Students) and it would continue to impact him for the rest of his life.

After his father’s death, Roethke finished high school and went off to college. He had no interest in carrying on in his father’s footsteps. Roethke attended the University of Michigan where he received his bachelor’s. After graduation, his” family pressured him to attend law school” (Ettari, Gary. “Roethke, Theodore.”). He had no interest in law and dropped out to get his master’s at Harvard University. Roethke started writing at an early age and always had a talent for it. Due to the great depression, he could no longer afford to continue his education and went on to teach. Roethke taught at 5 different universities during his career. During his teaching career, he was mentored by other colleagues and poets. He wrote all his poetry during this time. In 1941, he received national recognition after the publication of one of his poetry volumes “Open House.” He also received numerous awards during his careers like the Pulitzer Prize and Fulbright award. “Roethke’s work was characterized by a playful humor, intense introspection, and the quest for spiritual self-realization” (Boswell, Marshall, and Carl Rollyson. “Roethke, Theodore.”). He was still able to keep these recognitions through the years despite battling his own mental illness during his time as a writer.

Unfortunately, Roethke had also become an alcoholic like his father and he dealt with manic depression that leads to hospitalizations and a series of mental breakdowns throughout his adult life. Roethke had developed “a reputation as a hard-drinking tough guy” (Boswell, Marshall, and Carl Rollyson. “Roethke, Theodore.”). He dealt with a lot of mental issues regarding his father. Furthermore, Roethke’s uncle, who Otto ran the greenhouse business, also suffered from depression before committing suicide in 1923. Critics claim they could see the “madness and despair in his poetry” (‘Roethke, Theodore.’ Chambers Biographical Dictionary) as the years progressed and his condition seemed to worsen.

A lot of the angst Roethke had can be seen in one of his poems, “My Papa’s Waltz.” ‘My Papa’s Waltz,’ is “one of the most anthologized and recognizable poems” (Schaub, Joseph. ‘My Papa’s Waltz’) written by Roethke. It was written 20 years after his father’s death. In this poem Roethke is the speaker and he’s addressing his father back when Roethke was a child. The poem is about Roethke’s memories of the intricate relationship he had with his father. He loved his father, but Roethke “doubted” his father’s love for him (Horvath, Brooke. ‘My Papa’s Waltz.’) “Roethke worked hard to create a poem that held these very different attitudes in a complex tension” (Horvath, B. (2001). My Papa’s Waltz.). Roethke’s use of imagery, rhythm, metaphors, and wording allows the reader to better understand his internal struggles.

The first and second stanza in “My Papa’s Waltz” is the most important in setting up Roethke’s relationship with his family. In the first line of this poem, Roethke immediately introduces his father by his alcoholism. He uses the imagery in the first line of the “whiskey on your breath” (book) to illustrate exactly how much his father drinks. He also uses the imagery of “hung on like death” in the third line to mention that he is a little apprehensive of his father’s actions. The use of the word death could also be symbolic of his father’s impending early death and that he “greatly fears the consequences of letting go” (‘My Papa’s Waltz.’ Poetry for Students). The word “dizzy” in the second line however, describes Roethke’s innocence as a child. The use of dizzy is the light-hearted and silly way a child would view the smell of his father’s drinking problem. Roethke uses a lot of contradictory words, which is the first indication their relationship was a mix of emotions. In the fourth line, Roethke uses the metaphor “such waltzing was not easy” to compare this dance to their daily interactions. As if to say, despite the waltz being such a basic dance, it is not so simple between you and me.

The second stanza illustrates how different his relationships are with his parents. In the 5th and 6th line, the usage of the word “romped” (book) and the imagery of “slid from the kitchen shelf” suggests how Roethke and his father could play and rough-house together. However, the introduction of his mother changes the atmosphere of their family dynamic. Roethke had a way of “interweaving” (‘My Papa’s Waltz.’ Poetry for Students) “disparate emotions and moods” (‘My Papa’s Waltz.’ Poetry for Students). The usage of the word “mother” over mom or momma, is a little more distant compared to his use of “papa.” He was always wanting his father’s approval and “never ceased to admire despite their often troubled relationship” (Horvath, Brooke. ‘My Papa’s Waltz.’). He never appeared to have the same respect for his mother. The word “countenance” and the imagery of “could not unfrown itself” is a way to say his mother was displeased with Roethke and his father’s relationship or potentially just a way of acknowledging his mother’s unhappiness with her husband’s drinking. The rhythm in this stanza remains unchanged and seems to be the same as his mothers’ attitude.

The third stanza goes on to recognize how much of a hardworking man Roethke’s father was and to also emphasize how unsteady their relationship really was at the time. Roethke shows that he and his father could be close in the 9th line when he states, “the hand that held my wrist” (book). His father took the time to guide Roethke through their dance or rather their relationship. Conversely, Roethke used the imagery of “every step you missed” (book) in the 11th line to point out his father is flawed. “The father-son relationship should have been smooth and easy but in reality was awkward and stumbling” (‘My Papa’s Waltz.’ Poetry for Students). Regardless, Roethke used the imagery of “my right ear scraped the buckle” (book) to allow the reader the understand how he would hold on to his father despite his father having the tendency to be erratic, whether it be mentally or physically. Roethke had a way of excusing his father’s behavior because he was a hard-working man. He uses the word “battered’ in the 10th line to describe his father’s hands, which suggests the physical toll it has taken on his father to run his own business.

In the fourth stanza, Roethke uses the word “beat” to reiterate the roughness of his father. The imagery of “caked hard by dirt” pays tribute to the years of hard manual labor his father has endured. The imagery of “Waltzed me off to bed” implies their nightly bedtime routine. Again uses the word “waltz” as an effortless task. Roethke’s fond memory of his father taking him to bed. The metaphor of “still clinging to your shirt” to compare him never wanting to let go of his father, even if it is in his memories. That last stanza is also the punch in this poem. Roethke has a way of saying, no matter what you’ve done or what we have gone through, I still love you and I never want to let go of you.

The Family Relationship In My Papa's Waltz. (2021, Apr 12). Retrieved from https://studymoose.com/the-family-relationship-in-my-papa-s-waltz-essay 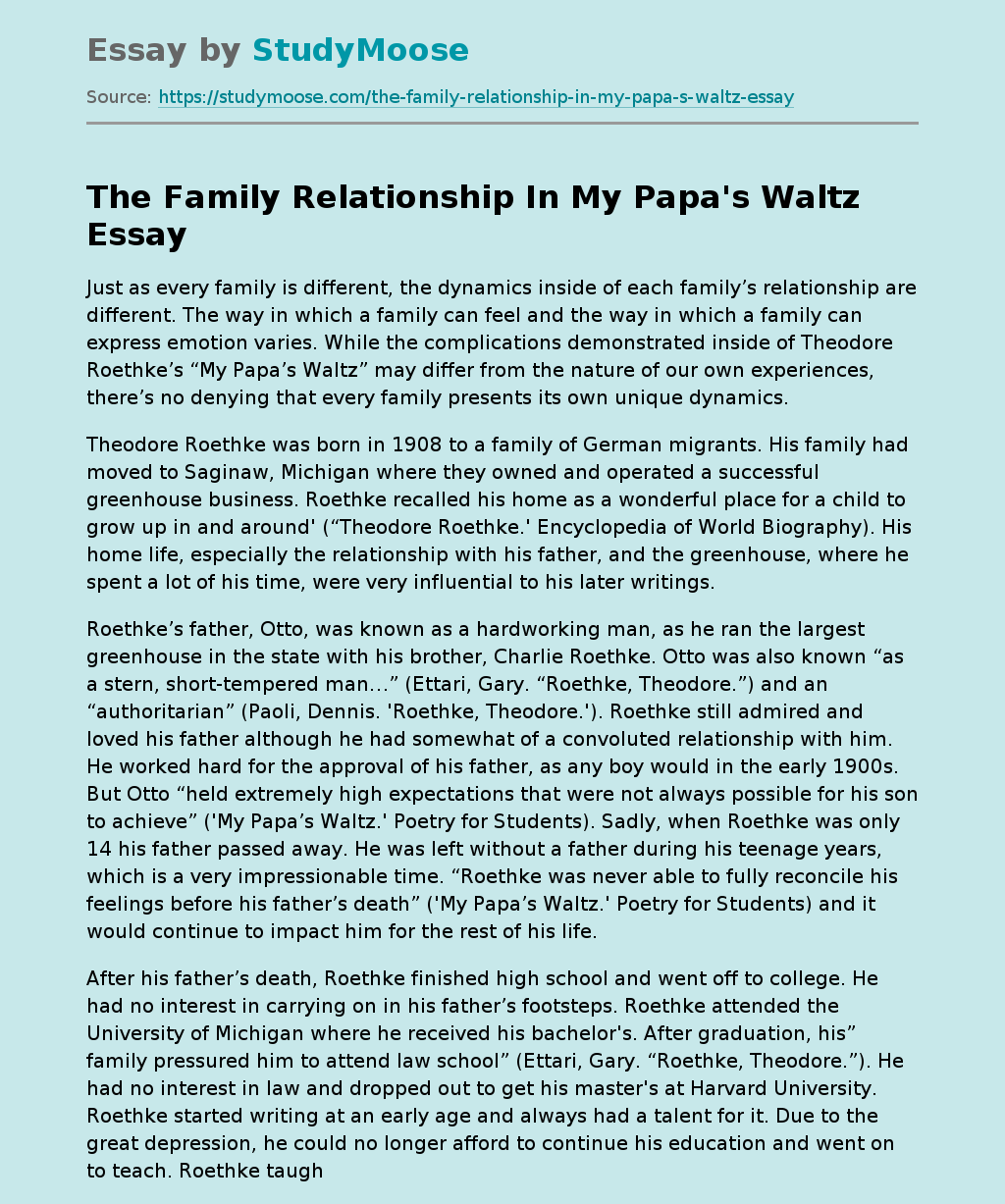