Sometimes expectations are too big to satisfy, even though you try your very best. It would be wrong to raise expectations to a level that cannot be met. You are scared that you might disappoint the people you have closest. Therefore you try to hide yourself and your insufficiency. This is just one of the things Cara deals with in the story, Ernie Breaks, written by Genevieve Scott. The short story is told through the eyes of Cara. Cara has just finished fourth grade, and her mother wants to reward her for that.

Therefore she brings Cara and Caras brother Jed to a pet store. Here they decide to buy a turtle, which Jed and Cara have to share. They call the turtle Ernie. One day when Cara comes home from school, Jed is maltreating Ernie. This makes Cara very sad and she wants to show her mother what Jed had done and show that Ernies tank is very messy. She ends up loosing Ernie, as he falls to the ground and dies.

Proficient in: My Relationship With My Family

The characters get described in an indirect way, where the reader has to draw conclusions from the way the characters act and how Cara explains them from her point of view. An example of that is where Jed is described: “He goes in there with his friend Toby everyday after school to play records and ignore me. This means that Jed also doesn’t help me with my math homework like Mom made him promise, so I am terrified that I’ll fail or get moved into retard room”1.

This is a good example of the indirect characterization, as this quote shows us that Jed is a brother, who does not worry very much about his sister. Firstly, he ignores her and secondly, he does not help Cara with her math, even though he promised. In addition you can see that Cara is very bad at math and needs help to get better. Throughout the short story Cara gets seen very considerate, especially around Ernie: “[…], if I say anything though, I’m afraid I’ll start to cry”2.

The fact that she nearly starts to cry, because Jed and his friend, Toby, are teasing Ernie, means that you get the impression that Cara is a very considerate and emotional person, especially when something happens to Ernie. This can have something to do with that she feels safe around Ernie. Furthermore Cara looks very much up to her elder brother Jed. This can be seen where Cara had got in trouble for painting on the girl from her class’ shirt: “He’ll at least think its cool that I got in trouble”.3 The fact that Cara thinks that getting in trouble is not so bad, because her brother will think she is cool, shows us that Cara looks very much up to her brother. As well she uses the same words as Jed: “[…] get moved into the retard room”. In the beginning of the story we get told that “Retard room” is a word that Jed uses.

Therefore we are informed that Cara uses the same words as Jed. The main theme in this short story is family relationship and about expectations, you have defined for each other. Observing the behavior of the characters, it can be seen that the main theme, family relationship, comes to expression through the characters in the way that the expectations they have for each other gets broken and they try to hide their insufficiency. This can be seen in all three characters. In the start Cara tells us about her mother and how she is trying to stop smoking with help from Quit4life, but in secret buys cigarettes from a pharmacist called Ernie Sherman: […] Ernie Sherman, the pharmacist where Mom buys her cigarettes because she won’t run into anyone from Quit4life”4. Here it is obvious that either herself or the people from Quit4life expect her to stop smoking. Still, she does it secretly and in that way she tries to avoid losing face. She does that to hide her incompetence.

The same behaviour is visible in Cara. She is expected to take care of Ernie, but ends up killing him by dropping him on the floor: “I jump backwards like Valerie Calorie and Ernie flips up off my palm and crashes off the edge of the tank and onto the floor”.5 Afterwards, she pretends having accomplished the expectations that is set for her by not telling her mother the truth about what happened. The short story also explains the expectations for Jed. He is – as well as Cara – supposed to take care of Ernie, but ends up maltreating him to play cool in front of his friend: “Jed is holding Ernie over the turntable. He puts him down shell-first and then puts his index finger on his belly.”6 Genevieve Scott uses in this short story symbols. The turtle in this short story symbolises Cara and what she has experienced, where she has to lock herself in a shell. An example of that is where she has to have a math test, and she does not know how to do it and draws a picture of Ernie instead.

Besides, she does not want to show Valerie her results: “I take Valerie Calorie’s from her, but I don’t give her mine.”7 Here you can see that she is embarrassed and therefore she wants to lock herself in a shell to protect her. Moreover she hits back against the people who do something bad to her like Ernie does when he experiences something bad: “I grab the black magic marker from inside my desk and swipe it across her yellow sweater”8. Here you can see that she does not put up with people making fun of her in the same way Ernie does not put of with being maltreated. Therefore there can be drawn parallels between Ernie and Cara.

At the end where Ernie dies, something dies inside of Cara as well: “I don’t understand why we have to learn about broken numbers. If something is broken, it’s wrecked and useless anyway. If it’s not your fault that it’s broken, you usually don’t need to care about it”9. If you interpret this quote, you can see that Ernie’s shell symbolises the shell Cara has to protect herself with. When Ernie’s shell breaks, Caras shell breaks as well, and as Cara says,” when something is broken, it’s wrecked and useless”.

So we can therefore conclude that when Ernies shell breaks and he dies, Cara feels wrecked and useless. Overall we can conclude that Genevieve Scott really has been capable of telling a story with focus on family relationship with the short story “Ernie Breaks”. Genevieve Scott has throughout the story used a first person narrator, writing from Caras point of view. This has made it easy for us as reader to understand what Cara thinks. The story is furthermore in possession of an indirect characterization, and we learn about the characters through their actions. 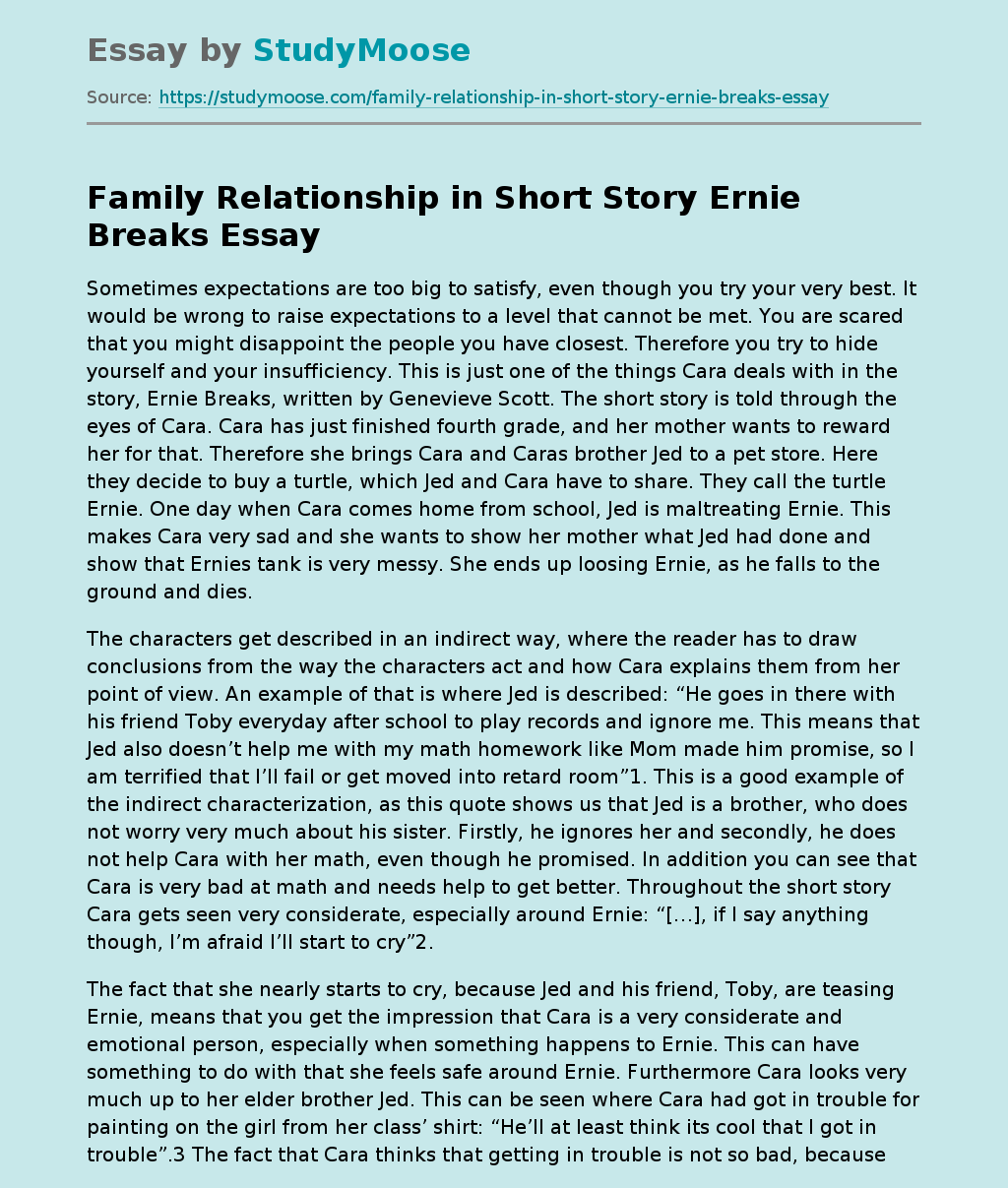