The Effect of Poor Family Relationship

Don't use plagiarized sources. Get your custom essay on
“ The Effect of Poor Family Relationship ”
Get custom paper
NEW! smart matching with writer

But when they start fighting to resolve their conflicts in front of the children, it leads to a negative impact on kids.

Quarrels between parents can cause detrimental effects on children’s emotional and overall health and their relationships with others later in life. Children become physically and emotionally upset when they see their parents fight. They become scared, may cringe, cower or hide. Some start crying while others may become badly scared. Children, who are brought up in houses where parents quarrel very often, cannot recover from the memories of their parents fighting with each other.

The long-term effects of yelling include poor self image and esteem, lack of self control, impulsiveness, anger and temperament issues, lack of patience, and mental childhood issues.

There are parents who don’t physically brawl with each other or consider their relationship abusive, rather fight a “cold war”, keeping mum and not speaking to each other. They feel that their children are unable to notice and recognize their fight. But they don’t realize how much of an effect it has on their children. While they can easily see how the extreme circumstances in other people’s homes could traumatize children, they fail to see that their own seemingly unapparent arguments may be impacting their own children. When the child or adolescent is depressed, it not only negatively affects them, but it also can have a dramatic negative impact on their family, their parents, their grandparents, their siblings, and also on their friends. People become extremely worried about them. They don’t know how to help them. So not only does the child who’s depressed feel helpless, but also those who love and care about the child may feel helpless.

They may be so concerned about them in terms of whether or not they’re actually going to try to end their life. They may not know how to help them stay more engaged with their peers or with their schoolwork. Mounting evidence in social science journals demonstrates that the devastating physical, emotional, and financial effects that divorce is having on these children will last well into adulthood and affect future generations. Children whose parents have divorced are increasingly the victims of abuse. They exhibit more health, behavioral, and emotional problems, are involved more frequently in and drug abuse, and have higher rates of suicide.

In conclusion, when a family is built on love, respect and devotion, they will always find a way to be close – if not in body, then in spirit. Once you have decided to live together, then no questions of separation may arise, even in the opinions. No one can be considered in a perfect relationship, how happy the couple is, as happiness in a relationship is just the happiness of the situations created by the partners. No relationship, as a whole, is destined to be jovial and satisfying. There can be moments of happiness and moments of struggles.

The Effect of Poor Family Relationship. (2017, Jan 26). Retrieved from https://studymoose.com/the-effect-of-poor-family-relationship-essay 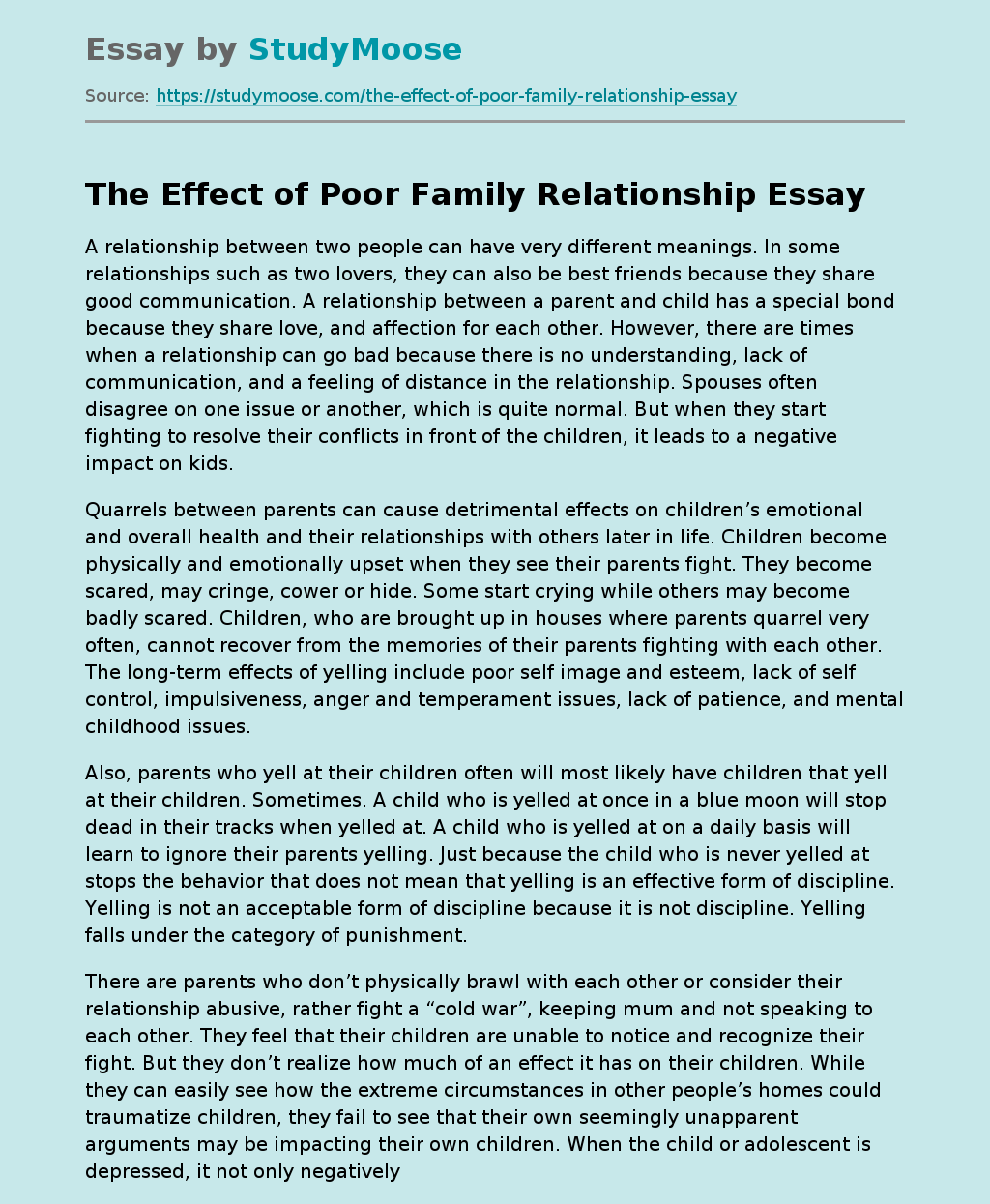