1) What is your assessment of Papa John’s differentiation strategy? On what bases does the company differentiate?

There are a number of bases on which Papa John’s differentiates itself, many of which are interrelated. First and foremost is Papa John’s offering of a higher-quality pizza, which not only allows them to differentiate on the basis of a product feature (i.e. the high quality ingredients used in the pizza), but, even more importantly, on the basis of reputation. While most other pizza chains have their sights set on more of a cost-leader/low-price strategy, and make an less genuine statement of quality, Papa John’s entire organizational culture is focused squarely upon the pursuit of “better ingredients, better pizza”.

This commitment has in turn endeared it to customer base, and has resulted in a long string of high customer satisfaction ratings. Papa John’s early adoption of online and mobile ordering technologies allowed it to differentiate itself on the bases of both timing of introduction and distribution channels.

Papa John’s was in fact the very first pizza chain to offer both internet- and text-based ordering, and it was able to generate tremendous revenues as a first-mover in these then-untapped channels. Being that Papa John’s is a part of the larger fast food industry, and consumers seek out fast food in large part on the basis of its convenience, the value of such a distribution system obviously lies in how easily accessible it made Papa John’s products.

2) Is Papa John’s strategy sustainable? What is your assessment based on a VRIO analysis?

Obviously the most sustainable base of Papa John’s differentiation strategy is its reputation as a producer of high-quality pizzas. Such has been earned through years of commitment to the goal of producing a “perfect pizza”, which is an outgrowth of a strong organizational culture and well-communicated vision. The relationship between Papa John’s and its dedicated customer base is socially complex, and these customers could not be taken away overnight by a rival who suddenly began using better ingredients. However, the underpinning of this reputation – the product feature of high quality ingredients – is not nearly as sustainable, as it is not too costly for Papa John’s rivals of comparable size to ultimately imitate. In fact, Domino’s and Pizza Hut have demonstrated a shift towards higher-quality ingredients in recent years, and so this point of differentiation is no longer as rare as it once was. However, it will take many more years of making pizzas of similarly high quality for either to actually cement the same reputation as Papa John’s, and reputation does remain a very sustainable base of differentiation.

However, it is worth considering at which price point the value of this reputation begins to diminish, given the nature of the product category itself. Papa John’s is, after all, a fast food pizza chain, and price does play a significant role in the fast food market. Obviously, part of the value of having a differentiated product is the ability to command premium prices for it, and to easily pass increased costs on to a customer base which is relatively price-insensitive. However, the question here is what price ceiling exists on fast food pizza, regardless of its quality. Papa John’s may have a reputation for the highest-quality fast food pizza, and loyal customers may be willing to pay more for this high-quality fast food pizza than a lower-quality fast food pizza, but the price disparity between the two is unlikely to be anywhere near as great as that between, say, a car made by Rolls Royce and one made by Hyundai. Papa John’s may be able to charge a premium, but it must still exist within what is an essentially narrow price range acceptable for fast food. Should Papa John’s prices exceed this reasonable range – perhaps in the event that they cannot continue staving off ingredient cost volatility as well as they have to this point – then even their most loyal customers will turn to other brands or substitute foods of higher quality which warrant a higher price.

The essential point is that price still does play a significant role in Papa John’s reputation – sure they make high-quality pizza, and sure it costs a little more than Domino’s, but that price premium is commensurate with its greater quality, and it strikes the right balance between affordability and quality. However, the value this reputation provides in allowing for higher prices – while it does exist, and thus leads one to conclude that reputation is a source of sustained competitive advantage – does indeed have its constraints. It creates value, but only until reaching a price ceiling which is lower for this product category than for premium products in most other product categories. Regarding Papa John’s other, interrelated bases of differentiation – timing of introduction and distribution channels – it is evident that these were merely temporary sources of competitive advantage along a base which has given way to competitive parity. Every other pizza chain (and pretty much every restaurant, chain or independent) now offers online and/or mobile ordering, and thus Papa John’s offering of increased convenience is no longer rare. Furthermore, Papa John’s has not been the first to market with any further similar innovations in the years to follow, and its base of differentiation as a pioneer of clever innovations is in many ways currently dormant. This is perhaps owed to a shift in organizational focus away being the first-to-market with novel propositions as Papa John’s looks increasingly to extending the business they have already perfected to foreign markets.

3) What do you recommend Papa John’s do to achieve its growth goals?

Papa John’s has encountered challenges in its attempt to balance its focus on producing a higher-quality pizza with expanding its product mix enough to keep up with competitors who offer broader product mixes. Papa John’s does not want to stretch its focus and resources too thin, and consequently dilute the quality of its pizza by shifting attention away from it. However, many of Papa John’s competitors, namely market leaders Domino’s and Pizza Hut, have broadened their product mixes to include items such as pasta dishes, and Papa John’s has in turn been pressured into adopting similar additions to their menu. Because all of these pizza chains have begun matching each other with regard to product mixes, adding menu items is acting more as a base of competitive parity than competitive advantage.

However, in expanding its product mix through co-branding strategies, Papa John’s can forge a far more sustainable base of differentiation. Papa John’s has already partnered with Nestle in adding additional dessert items, and such is a strategy they should continue to pursue aggressively, not merely with Nestle but with many other companies. Obviously Papa John’s can free up its resources and attention in partnering with another company to develop and produce menu items for it, and it can focus more on maintaining its high level of pizza quality. More importantly, if Papa John’s could enter into exclusive deals with these other brands and companies, and in turn be the only one in the industry to offer products by a given brand of high repute (and even possibly a product made exclusively by that brand for Papa John’s), then its competitors will have much more trouble attempting to match the combined brand equity of Papa John’s and its partners. In terms of more of a corporate-level strategy, Papa John’s should consider integrating backward into the production of its high quality ingredients. Obviously it has already done this to some extent with BIBP Commodities, Inc. in combatting cheese price volatility, but they should consider going a step further in actually producing cheese and other ingredients themselves. They would be much better poised to insure a steady stream of consistently-priced ingredients in handling production themselves to some extent, and they would also be able to directly maintain the quality of its ingredients.

It has already been stated that the product feature of high-quality ingredients is not very sustainable, and that other pizza chains are already moving to match the quality of Papa John’s ingredients. However, should Papa John’s lock in a supply of high quality ingredients at affordable prices whilst others are still encountering significant price volatility, then it will be more costly for Papa John’s competitors to imitate its pizza quality. Additionally, Papa John’s could act as supplier of ingredients to other restaurants (excepting of course its competitors), just as it originally expanded into the printing industry to produce its own print advertisements, but now also provides printing services to other companies. Expanding into the production of ingredients it already uses so heavily and, by nature of its expertise in producing high-quality pizzas, of which it already as a strong understanding makes greater sense than creating a Hispanic restaurant as is suggested in the text, being this such is a specific category of food with which Papa John’s has no prior experience. In entering a restaurant category so dissimilar, Papa John’s will have to spread its attention thin – far thinner than in expanding its product mix – and, in turn, will likely be distracted from its heretofore steadfast pursuit of “better pizza”, setting in motion an eventual loss of its hardfought reputation. As stated, Papa John’s reputation is its strongest point of differentiation, and, regardless of whatever move it makes next, it must maintain its high level of brand equity. 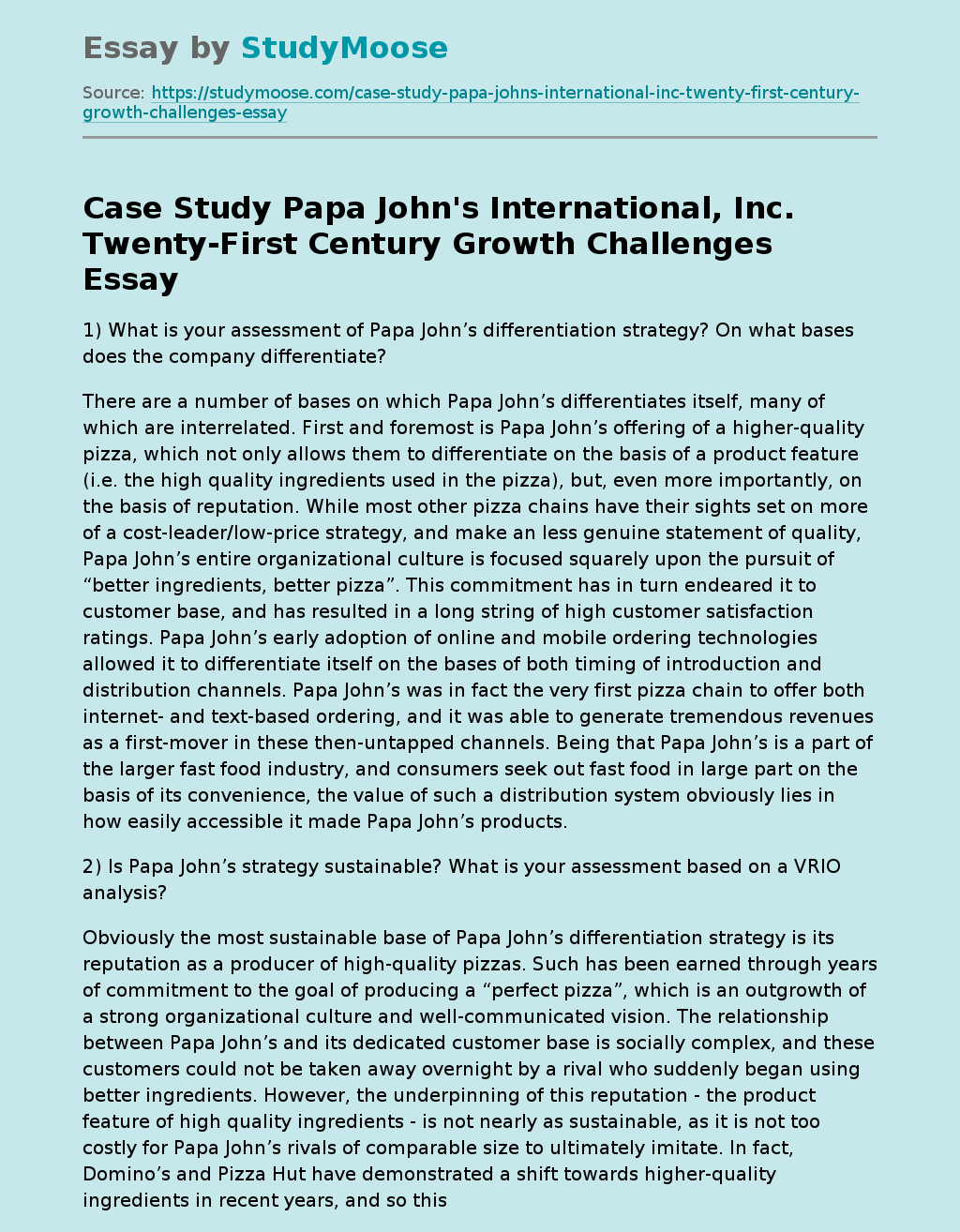