Review of Living in Sin, My Papa's Waltz, and The Ruined Maid

The poem “Living in Sin” by Adrienne Rich is about a woman who is unhappy with her marriage. She struggles to imagine her dream of a perfect marriage over the reality of being unhappy with her husband. She seemed to expect something better than that of the situation she’s in. According to an analysis by Write Work, the woman’s life in the poem was sad and boring (WriterWork). This was implied using the past tense, which signs her dream marriage, versus present tense, which speaks of the reality that she’s never really happy about it (WriteWork).

Don't use plagiarized sources. Get your custom essay on
“ Review of Living in Sin, My Papa’s Waltz, and The Ruined Maid ”
Get custom paper
NEW! smart matching with writer

The poem is really intended for women. This would be a very nice piece of advice for women who plan to get into that fairy tale relationship, but never knew unexpected circumstances which may happen. Even in best relationships, things aren’t always as easy as everyone wants it to be. It is not every day you can expect long stem roses.

“Living in Sin” is a free verse poem. The short lines in it showed the hopeless and dreary mood of the piece (WriteWork). According to the analysis of Write Work, Imagery and meaningful languages were used to describe the unhappy life of the woman (WriteWork). The author also used personification, specifically when the words “beetle eyes” were used. The poem was written in a very proper way. It is not difficult to understand unlike most poems. “Living in Sin” seemed to be pretty straight forward about what it is really trying to imply.

The analysis showed that the poem portrayed the unhappy life of the woman in four meaningful illustrations (WriteWork). First, the woman pictured a fairy tale marriage opposite to what she has. The next picture was the image of a romantic dinner that really never happened. The third was a husband who never bothers to care for his wife. The last was the image of the woman’s fantasy over the reality that she’ll be waking up another morning to start it all over again (WriteWork). The intent of the author of showing the life being married to someone you don’t really love was very much clear.

“My Papa’s Waltz” by Theodore Roethke is about a father and son relationship. It is something that shows how a boy willingly spends time dancing with his father. According to Kerry Michael Wood, the poem has been viewed as a lovely image of a father dancing around with his son (Kerry Michael Wood). The poem was believed to be inspired by Theodore Roethke’s father. The author was very much affected about the death of his father when he was at the age of 15 (Kerry Michael Wood). The poem merely described the sweet moments of a son enjoying the company of his father. It is much of remembering memories of his parent.

Every one who had cherished times with their father can actually relate to the poem. “My Papa’s Waltz” may be a good source of inspiration and realization not only to sons, but all children to value the moments with their parents. This will definitely inspire children to learn to appreciate their moms and dads. Life’s too short to have regrets at the end.

“The Ruined Maid” by Thomas Hardy is about a conversation of two women who have been together in work. According to the analysis of Liz Allen, the woman, who spoke first, met the other girl named Amelia and was surprised about how Amelia looks since they last saw each other (Liz Allen). Amelia then speaks of that she has been ruined which means she became a prostitute. The poem showed extreme differences between the two women and portrayed the past and present life of the “ruined maid” (Liz Allen).

The author intended the poem for much mature audience. The poem relays an underlying message that not everything which is good outside will be good inside. Everyone has his/her own dark days in their lives. Amelia may look better in her dress and accessories, but deep in side her is a woman full of fears and regrets. The poem pictured Amelia as the change; a change that had been done through wrong means. “The Ruined Maid” could be a determination to urge the value of women in the society. This could also be a warning that prostitution may still exist and eradicate the rights of women.

The poem “The Ruined Maid” is written in a form of a dialogue (Liz Allen). The poem is consisted of six stanzas with four lines each. According to Liz Allen’s analysis, in the first three lines the first woman speaks and in the fourth line Amelia replies to her (Liz Allen). The name “Amelia” means ‘effort’ or ‘work’. She may have made good efforts in her job (Liz Allen). The first woman shortens it to “melia” which actually means ‘rival’ or ‘ambition’, since Amelia is striving to belong herself to the higher class society (Liz Allen).

Allusion was used in the line ‘bright feathers three’, and metaphor was used in the phrase ‘being ruined’, which means she had become a prostitute. According to Allen’s analysis, the author used several poetic devices in the speech of the first woman (Liz Allen). Such phrases are: ‘digging potatoes’ and spudding up docks’. These had given emphasis through the use of alliteration. The poem follows a rhyme scheme of AABB. The analysis stated that the rhymes on the third and fourth lines are just the same throughout the poem (Liz Allen).

The three poems differ very much in form, styles and approach. The “Living in Sin” by Adrienne Rich intends to show the life of being married to someone you don’t really love. It was created in a free verse form with dreary tone or mood. “My Papa’s Waltz” by Theodore Roethke opposite to “Living in Sin”, was made with a joyful mood following a rhyme scheme which gave it a more upbeat tone.

Contrary to the two poems, the “The Ruined Maid” by Thomas Hardy was written in a manner of combining a rhyme scheme with a melancholy tone. “The Living in Sin” gives more emphasis on the happiness of a woman should have in a marriage, while “My Papa’s Waltz” implies the importance of parents in children’s lives. Then “The Ruined Maid” gives a more intricate understanding of women’s rights in the society. These three poems speak of messages which may not be as definite as readers can read it once, but as deep as how they can understand it.

Review of Living in Sin, My Papa's Waltz, and The Ruined Maid. (2016, Dec 01). Retrieved from https://studymoose.com/review-of-living-in-sin-my-papas-waltz-and-the-ruined-maid-essay 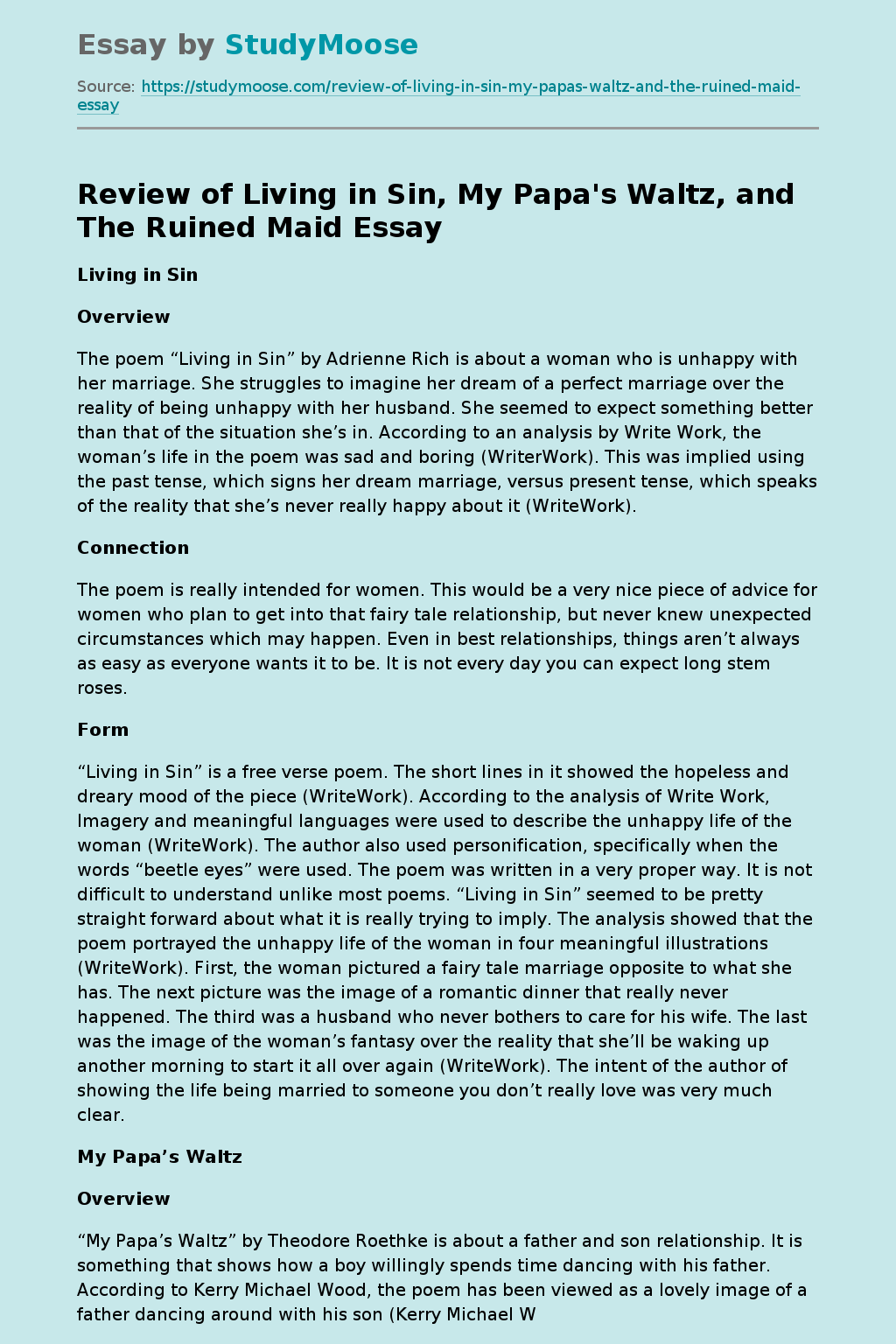