A poem My Papa’s Waltz by Theodore Roethke

“My Papa’s Waltz” by Theodore Roethke, is an intriguing poem about a memory of a boy and his father waltzing around the house. The ambiguity in this poem can lead to two very different interpretations. It can be seen as a child terrorized by an abusive father or a child having a playful romp with his father before bedtime. In this poem, Roethke uses metaphors, similes, imagery, and structure to make a strong impression on the reader. In the beginning, the speaker shows that he might not be having as much fun with the waltz as he would have thought.

Don't use plagiarized sources. Get your custom essay on
“ A poem My Papa’s Waltz by Theodore Roethke ”
Get custom paper
NEW! smart matching with writer

“But I hung on like death: / Such waltzing was not easy.” (line 4). Since the boy must hang on “like death”, it shows that the waltz is not just “not easy”. This line is also an example of a simile. The boy is hanging onto his father so hard that he is as inescapable as death. If the waltz in the poem is thought of as an extended metaphor for the relationship between the boy and his father, the son could be writing that his entire relationship with his father wasn’t easy.

As the poem goes on, the waltz gradually gets more and more difficult as well as his relationship with his father. In the third stanza, the father keeps missing steps and scratches the boy in the process. This could also be a metaphor for all of the mistakes that the father has made in real life which could hurt the boy in nonphysical ways as well.

By using imagery in this poem, Roethke helps the reader to connect with the boy. One use of imagery in the poem is when the boy and the father “romp” around the kitchen. The word romp means to play roughly or energetically. The reader can see here that not only tha “My Papa’s Waltz” has a simple rhyme scheme of ABAB.

Although the rhyme scheme helps with the flow of the poem, there are many slant rhymes that disrupt the flow as well. For example the word “dizzy” sounds very similar to “easy” but they are not perfect rhymes. Roethke also writes this poem in an iambic trimeter. Similar to the iambic pentameter which has a classic five beats per line, each line in the poem consists of three beats. Not only is the poem about a waltz, but it is becoming one as well since there are three beats in a waltz. This contributes to how a person reads the poem as well as the tone of the poem.

A poem My Papa’s Waltz by Theodore Roethke. (2016, Sep 07). Retrieved from https://studymoose.com/a-poem-my-papas-waltz-by-theodore-roethke-essay 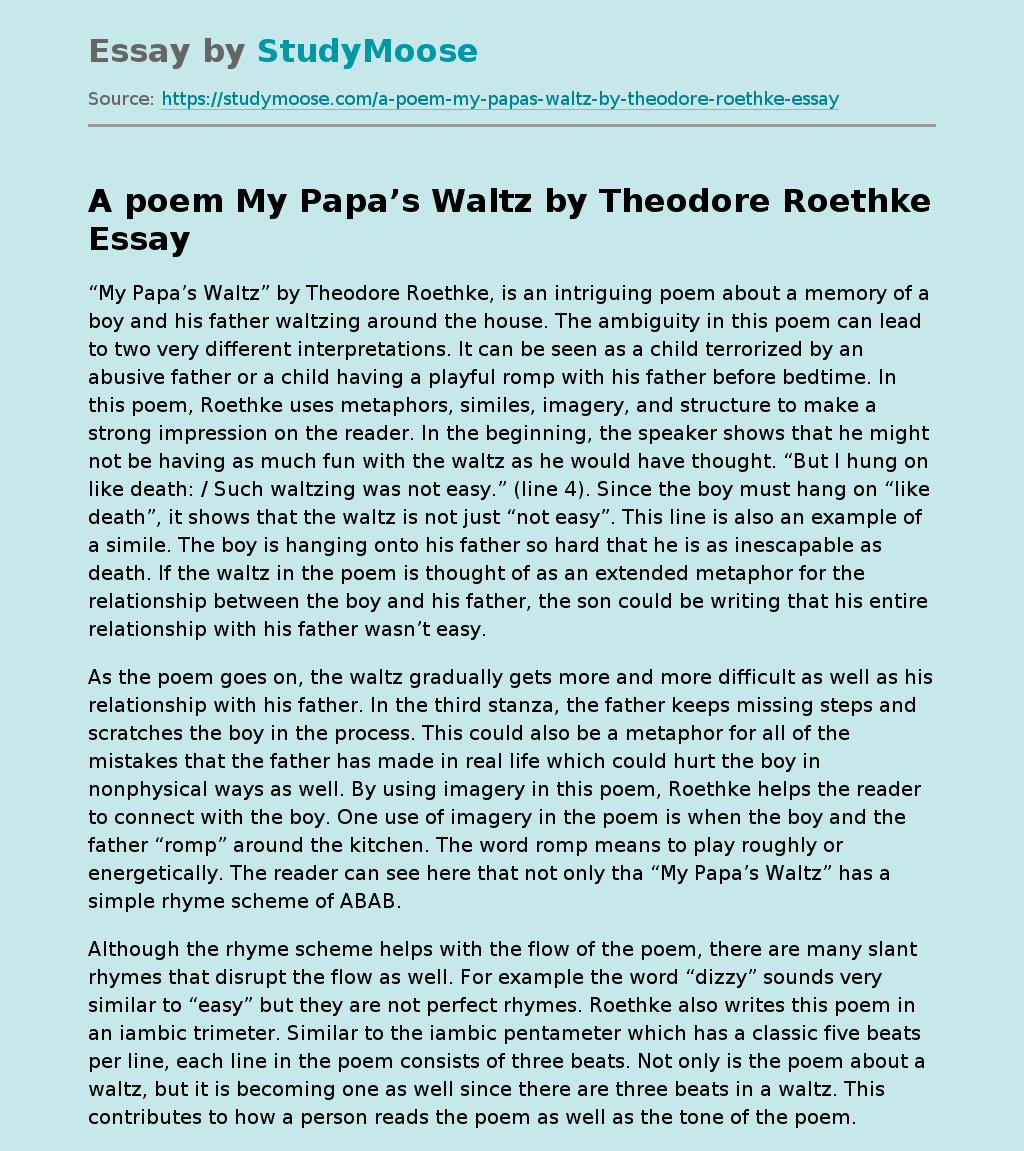