A Commentary on the Geranium by Theodore Roethke

The poem “The Geranium” by Theodore Roethke tells the story of a bachelor, formerly a party animal, now a lonely, aging man, through a sustained metaphor which uses the speaker’s geranium as a symbol for the disregard of his own health. The plant is never well, nor is he, due to the speaker being as inconsiderate to the geranium as he is to himself. With imagery, alliteration, and symbolism, much is learned about the speaker through a simple geranium to which he is intrinsically intertwined.

Don't use plagiarized sources. Get your custom essay on
“ A Commentary on the Geranium by Theodore Roethke ”
Get custom paper
NEW! smart matching with writer

We can see right from the beginning with lines such as “limp and bedraggled . . . / . . . like a sick poodle / Or a wizened aster in late September,” (2-4) that our speaker does not think very highly of himself nor his geranium. The descriptors give a pathetic, aging feel; the comparison to a “wizened aster” is particularly potent. It suggest that like the flower, the speaker is no longer “in bloom”, so-to-speak. That his colour has faded, and he is past his prime.

The themes of aging and entering a new life stage come up again in line 6: “For a new routine –”. The caesura brings the reader to a halt; its sudden and final nature is reminiscent of an ending. The words in the line itself indicate a new beginning, which creates an interesting effect. This line could be representative of the end of the speaker’s youth and bachelorhood, as well as the beginning of a new point in his life. The act of taking the geranium out to the trash could also be symbolic of changing life stages; placing it by the trash could be representative of the end of one cycle, and bringing it back could represent starting anew.

In following with the idea of starting anew, our speaker shows plans of lifestyle change; he plans to change for the better and agrees that “Sustenance seemed sensible” (8) The alliteration here evokes a childlike, somewhat self-deprecating feel, as though the speaker is chiding himself for not remembering something that seemed so simple. The fact that the speaker managed to forget this in the first place could also indicate that he has let his health go in the past, which is further evidenced near the end of the stanza, where the speaker talks about living “. . . on gin, bobbie pins, half-smoked cigars, dead beer” (10) as well as the consequences of such irresponsible actions; he talks of being “shriveled” and “dried out”. It’s clear both the speaker and his plant have suffered from such a way of living. It also seems to reveal the careless and somewhat incompetent nature of the speaker. After all, if you can’t even take care of a plant, how can you take care of yourself?

In the next stanza we get another glance into our speaker’s former life. He talks of “ . . .dumb dames shrieking half the night” (16) as well as more mention of alcohol. The pieces of the speaker’s past we have received thus far can be put together to form the image of a reckless bachelor who gives no thought of tomorrow. With the current events of the poem, we can see how this lifestyle doesn’t do much for our speaker now that tomorrow is here. In this stanza we also get to hear the narrator describe himself directly for the first time, but he still ties himself to the plant, showcasing how heavily interconnected he and the geranium are. The speaker says that they are both “seedy”, which is a rather interesting play on words due to the fact that it means sordid or shabby, or could be used in the context of plant seeds. The term acknowledges both the similarities and differences between the speaker and the geranium.

In the third stanza and final two lines, the speaker’s maid tosses the geranium in the trash which angers him so much he fires her. The actions of the maid would obviously hurt our speaker, seeing as the miserable, wilted geranium was his only friend. There is also the possibility that it was the cause of the actions of the maid that really wounded the narrator; that is was the fact that the maid saw something so analogous to himself as useless trash that drove him into enough of a rage to sack his maid. Thus the poem ends with the speaker no better off than he was in the beginning; perhaps even worse, now that the maid has brought to light how worthless the speaker’s life really is.

Even though plants and people are seen as self-sufficient organisms, “The Geranium” highlights that in order to truly blossom, care, compassion and companionship from another are required. Theodore Roethke’s use of dreary, aged language and bland settings create a desolate atmosphere which provides the framework for the tale of a man who seems to have disregarded this until it was too late.

A Commentary on the Geranium by Theodore Roethke. (2016, Dec 25). Retrieved from https://studymoose.com/a-commentary-on-the-geranium-by-theodore-roethke-essay 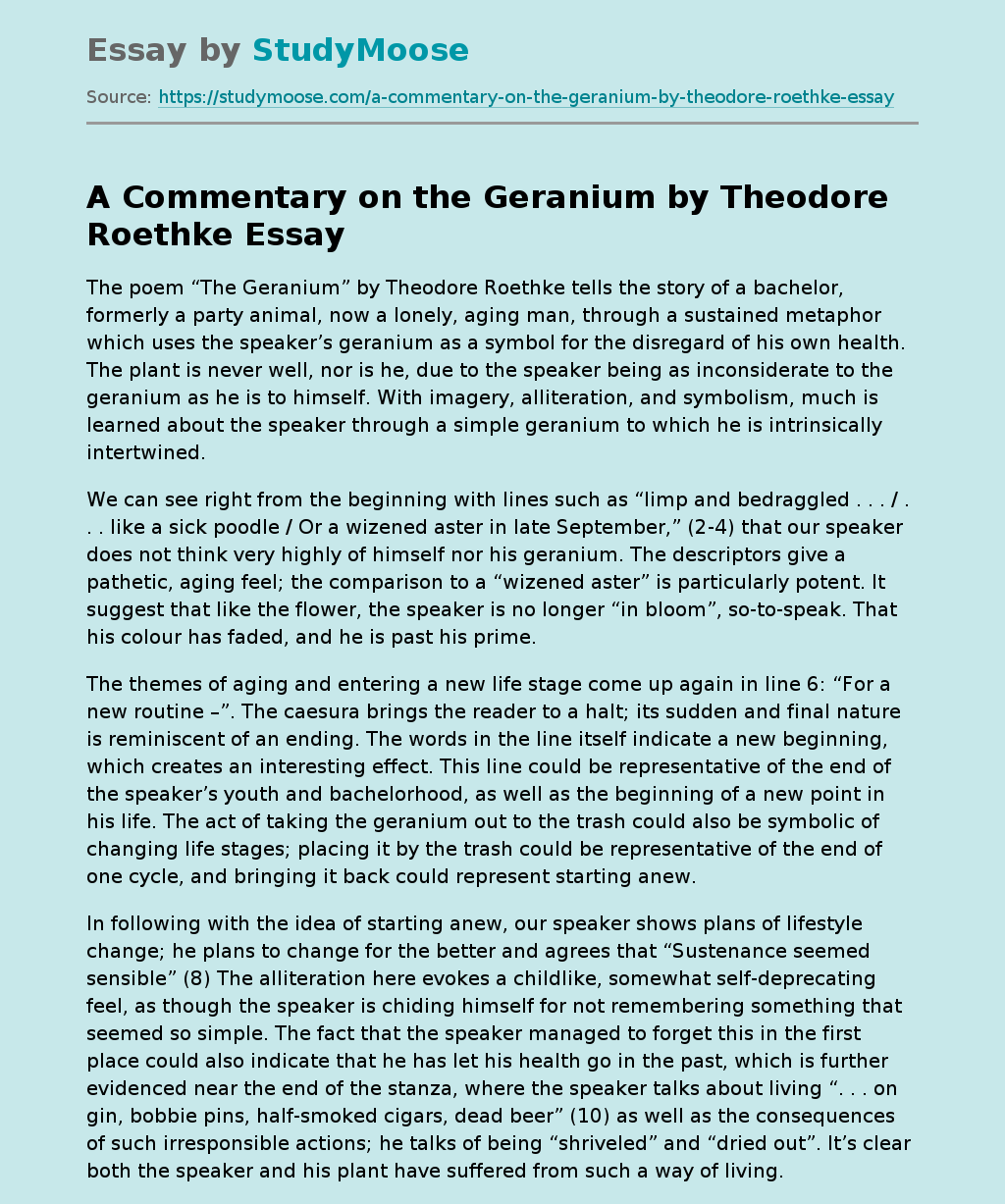