The poems "My Papa's Waltz"/"Grape Sherbet"

Memories are not real. Although we try to cling to memories, they will never be revived. Both the themes in My Papas Waltz by Theodore Roethke, and Grape Sherbet by Rita Dove, share a similar idea along with the tone. However the poems are differ greatly in structural aspects. The theme of a poem creates the general moral or idea, poems may have themes with deeper meaning than that of the surface of the poem.

The themes are similar in the aspect that they both are reflections of the past.

Don't use plagiarized sources. Get your custom essay on
“ The poems “My Papa’s Waltz”/”Grape Sherbet” ”
Get custom paper
NEW! smart matching with writer

Grape Sherbet demonstrates a form of this feeling of a memory when it begins by stating the day, Memorial. This is a clear indication of reminiscence because of the purpose of the holiday. The poem My Papas Waltz also has a theme closely related theme. Although the reader may be skeptical and even concerned about the speakers father, it is revealed to us that the event was enjoyable and memorable. The speaker clings to the memory of the father and the times that he was with the speaker.

The themes in both poems are comparable with similar points dealing with theme. Part of the theme is affected by the tone of poems.

The poems have an enthusiastic tone. They both emit a rather happy mood throughout the poem. The subtle hints of joy are shown during flashbacks in Grape Sherbet. The speaker obviously showed great contentment as a child and clearly enjoyed the presence of her father. In My Papas Waltz the speaker cherished the moments that the father was home.

They romped through the house which shows the playfulness they displayed together. The tones in both poems reflect the happy feelings the speakers get with their fathers. The tone is also affected by the structure of the poems.

Structure can show a refinement in upbringing or possibly help define the tone. The past to present movements in Grape Sherbet show the flashbacks or memories. However the poem My Papas Waltz uses a defined structure without use of flashbacks. These similarities and differences add to the uniqueness of the poems and show the universal experiences of losing someone close.

Both poems show an attachment to the father after the loss of him. The themes in the poems have similar ideas, and the tone also uses a similar mood in both poems. However the structure in the poems differ in some ways. These poems are both excellent examples of memories.

The poems "My Papa's Waltz"/"Grape Sherbet". (2016, Jul 04). Retrieved from https://studymoose.com/the-poems-my-papas-waltzgrape-sherbet-essay 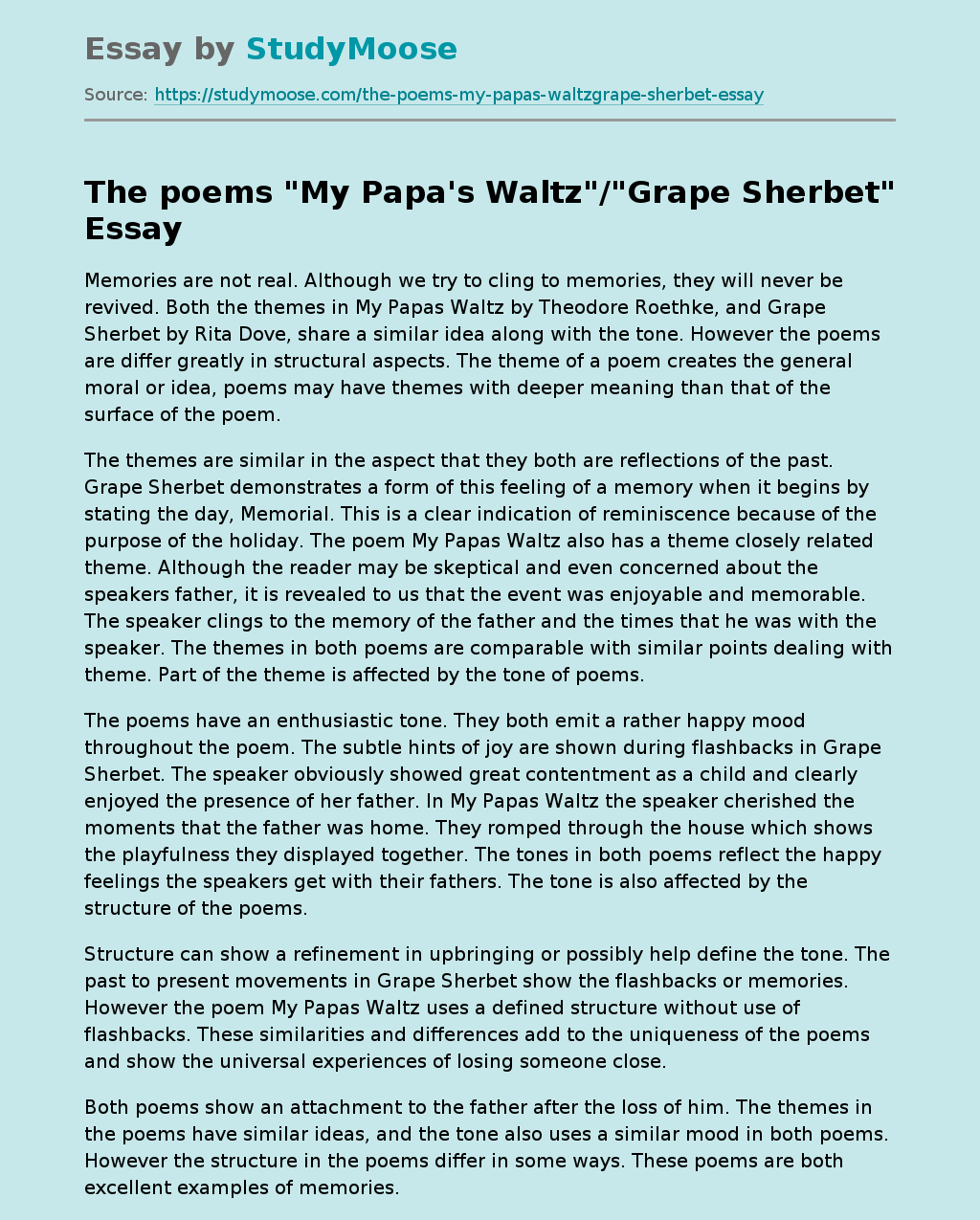