Poetry Essay on The Cord, My Life, and Bike Ride With Older Boys

In the three poems My Life by Joe Wenderoth, Bike Ride With Older Boys by Laura Kasischke and The Cord by Leanne O’Sullivan the theme of adolescence is developed through the language techniques these writers have used. A different idea of adolescence is represented in each poem which explains the troubles we can have through adolescence such as the problems we have to face and accept, decision making and how mothers are so protective of their children growing up.

These ideas are shown through the language techniques of both metaphors and extended metaphors, punctuation, personification, and alliteration.

Don't use plagiarized sources. Get your custom essay on
“ Poetry Essay on The Cord, My Life, and Bike Ride With Older Boys ”
Get custom paper
NEW! smart matching with writer

The poem My Life by Joe Wenderoth explores how we have to face problems and accept them during adolescence. My Life is about a boy finding an animal in his room and raising it up by himself only to find out later that it can quite easily kill him and it eventually will. The animal is explained through the extended metaphor “

I called the animal My Life” this is telling the reader that the animal is himself, it is his inner self.

“my Lief is an animal, it is alive and has a mind of it’s own, uncontrollable, which lies within himself. he tries to tame it, which you cannot do to a wild animal, controlling the animal and change his fate until he realises that it will kill him and nothing will change that. the use of alliteration of “i stopped singing it to sleep explains how he has given up on taming it, little by little.

He is trying to use rhythm front he alliteration to make it soothing as though the writer has given up on the animal but it is slowly pulling away and accepting the truth of “My Life”.

A Metaphor of “I no longer make My Life do tricks” is used. This quote is the writer completely letting go of My Life and accepting the truth, we all live to die. “My Life” was his inner which is would kill him in the end no matter how much he cared or tamed it because we are born to die and nothing can change that. This metaphor explains the writers acceptance, at the beginning he was so hopeful and excited of the animal making it do do tricks but this quote near the end explains the development of the idea throughout the poem how he just lets go and accepts the idea.

During Adolescence we are often faced with many problems and life lessons and whether we want to or not, we have to accept them because the outcome won’t change we will have to and learn to adapt to them. Decision making is a big part of adolescence, we have to start making decisions that we may or may not regret later, the poem Bike Ride With older Boys By Laura Kasischke explains and develops this idea.

This poem is about a 13 year old girl who makes the decision not to meet up with two older boys at the stop and go, later regretting this decision as a bored housewife. She questions her decision and whether it could have turned out to be a highlight or the biggest mistake of her life, this is supported with the use of punctuation and a metaphor in the quote “I have been given a little gift-“.

The hyphen used at the end of the line represents a pause, letting us and herself think, is it really a little Gift? She plays over the idea of whether its a good idea to accept the “gift” comparing the pro’s and con’s of the situation. The quote “knowing the girl i was…” again uses punctuation expressing how naive the girl is. Kasischlke uses the ellipsis to support this and representing a pause as she plays over the idea of whether she should go on the bike ride or not. What would that make her as a person though, because she doesn’t usually do things like this but does that mean it’s a bad thing? It could be the most exciting thing that ever happens in her life.. or it could be the worst.

The writer describes to herself what could happen, what it would be like as though she is tricking herself into going as nothing bad would actually happen but there is still a small part of her knowing that it could all go wrong. Punctuation in the quote “Two cute and older boys pedalling beside me – respectful and awe” show this to the reader. The hyphen is explains a pause in which she acts as though she is unsure of the boys, if they really will only go for a bike ride and that they’ll treat her well.

Her decision was initially was not to go but looking back on it nothing bad could have actually happened, could it? She regrets her decision of not going on the bike ride even though she is unsure of what actually would have happened. During adolescence we make decisions which we think is the right choice at the time, our opinions and outlook on the decisions we make may change over time but we can’t change them. That is just all about growing up. Parents, Mothers especially, are highly protective of their children growing up, giving their children enough space for them to go out while still keeping them close being able to pull them towards them when they’re in trouble.

The Cord by Leanne O’Sullivan explores this idea throughout the poem. The poem is about a daughter on the phone constantly to her friends in her room while her Mother sits in another room not complaining as she doesn’t mind because her daughter is safe at home. The extended metaphor of “The Cord” is present throughout the poem. “The Cord” is suggested as being an umbilical cord, the connection between a Mother and child through the development of the child. The umbilical cord gives everything a child needs for growth and gets rid of anything unneeded, the phone cord acts as like this in the poem.

The mother is giving her daughter everything she wants, space, conversation, as a person in adolescence wants while she still keeps her daughter close and safe at home, “My Mother never complained about the phone bill” shows how you can’t put a price on your child’s safety. She(Mother) will feed her daughter whatever she wants to keep her daughter safe at home away from any trouble. A metaphor of “Perhaps that’s the only way she thought she could reach me, sending me to the underworld”, shows the daughters understanding of her mother’s doing.

That her Mother is giving her a taste of the deep, dark, lost souls world so she can see what it is like and enjoy it without losing herself to the underworld completely, turning rebellious. Personification of “watching the cord stretch it’s muscle away from her” reflects upon the extended metaphor of the umbilical cord. This quote is explaining the daughter creating as much space between herself and her mother as she is able to but the connection between them is still there as the cord can only go so far before it is torn. The Mother has given her space and left her alone until she is called upon by her daughter for some help.

During adolescence we just want space and freedom although parents, especially Mothers, can be highly protective giving us what we want while still giving us room to grow up and become ourselves. This idea was developed throughout this text to show the theme of adolescence through language techniques. In conclusion, the theme of adolescence was presented in all three poems of My Life by Joe Wenderoth, Bike Ride With Older Boys by Laura Kasischke and The Cord by Leanne O’Sullivan through the use of language techniques enforcing different ideas of adolescence.

These ideas included problems we have to face and accept, decision making, and how Mothers especially can be so protective of their children growing up. Language techniques used included both metaphors and extended metaphors, punctuation, personification, and alliteration. Adolescence was developed throughout these texts as the ideas in each poem presented a different part of adolescence which helps us understand this more easily.

Poetry Essay on The Cord, My Life, and Bike Ride With Older Boys. (2016, May 19). Retrieved from https://studymoose.com/poetry-essay-on-the-cord-my-life-and-bike-ride-with-older-boys-essay 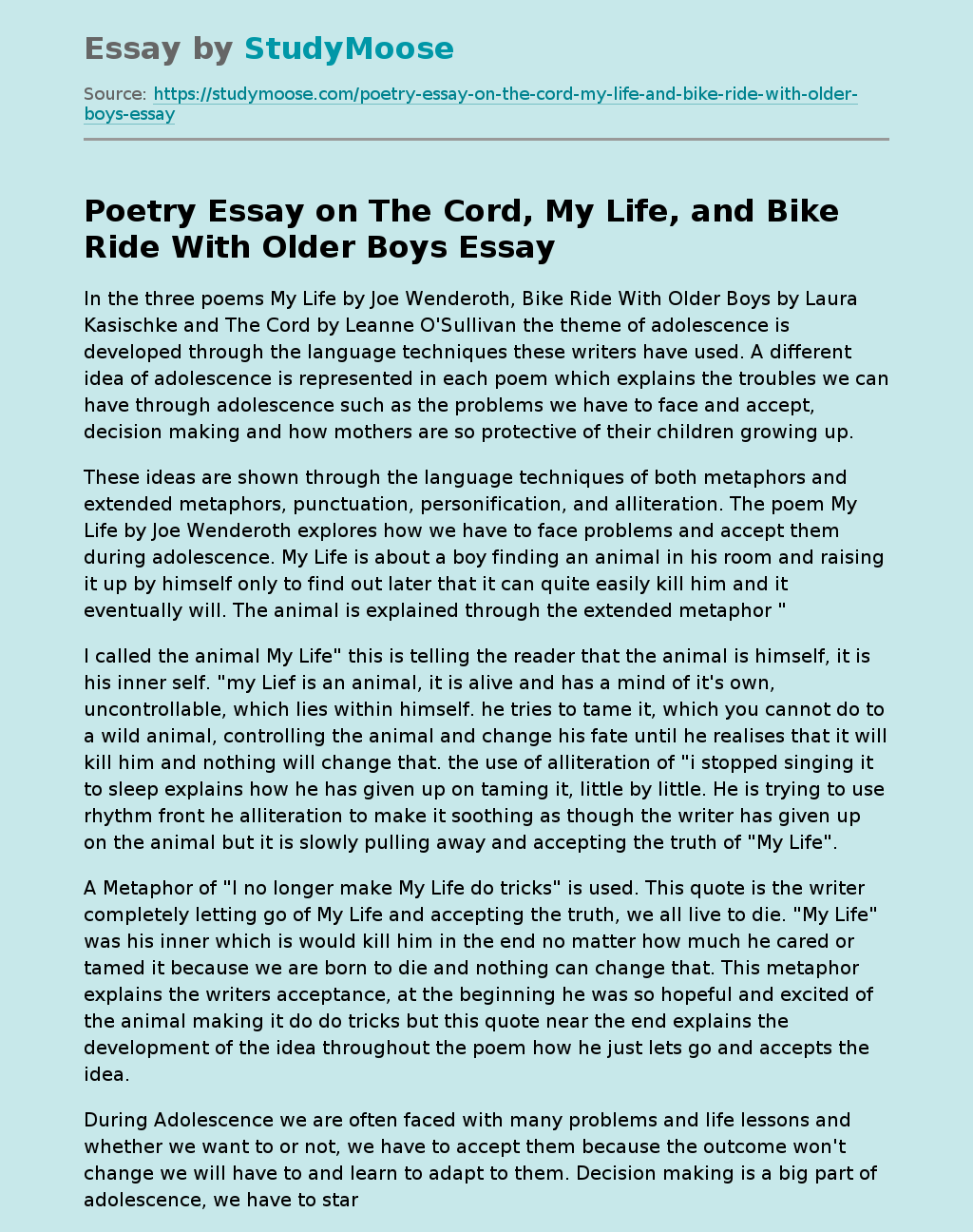