We can define principle as a dogma or doctrine, which supports our investigations and thus can be used in practice. It has been invented by humans, who like to put things into order. Xenophanes, Socrates and Plato were the ones who enquired after the meaning of principles and analyzed them thoroughly. However, the Greeks believed that principles have long existed before mankind, since they emerged beyond human reason and have always been a part of the Cosmos. Principles therefore, determine all existing things (the nonliving as well) and play a crucial part in life.

Don't use plagiarized sources. Get your custom essay on
“ Inner Self ”
Get custom paper
NEW! smart matching with writer

Principles can be either regarded as laws such as e.g.

The Law of Archimedes, but most of principles are not determined by science. Morality is a set of laws artificially created by men to retain order. However, we have never agreed to obey these laws. I would like to devote this essay to the meaning of morality, for this is the only set of principles that can be discussed upon.

Morality is a rather general notion, but basically it requires the presence of human kind, whilst other principles can exist independently. The meaning of morality changes constantly, depending on the culture that you were brought up in and history.

For instance, in Poland nobody would stand up against a pack of Wszechpolska Mlodziez persecuting an African. If it were happening in the U. S, either these people would go to jail or be beaten up by a black gang. Conformism has the advantages that it does not demand anything from you.

Most of Poles are either conformists or cowards, too frightened to even call the police. Morality demands some effort which is why people find it rather uncomfortable. Should we help an elderly lady, even though we gain nothing by doing so? The only person that takes advantage of our deed is the lady, but sooner or later she will forget about the event.

Why should we let a pregnant woman sit down in the bus? Neither of the sides really gains anything. It is merely an act of pragmatism, so that the probability of miscarriage decreases. Many say that morality tells us to let the woman sit down, but it can just as well have nothing to do with morality. Why should we care whether the woman will miscarry or not? It is not our business and it does not affect us in the slightest way. On one hand, it might not be our business, but on the other hand it is not pleasant to look at a woman bleeding on the floor and screaming her head off.

It is therefore a better solution to resign from the luxury of sitting instead of provoking a situation of potential miscarriage. Hobbes has been greatly intrigued with the meaning of morality and law. According to him, there was no such thing as morality-people used to kill each other like animals, without guilt. However, at some stage they became tired with the constant struggle for survival and decided to maintain a ruler, who will dominate all people and thus prevent them from further fighting.

It meant of course, that to some degree they had to give up their freedom for the sake of being ruled, but it meant a safer and more comfortable life. As we know, the story is fiction, but at least it tries to describe the importance of law and morality. According to me, this explanation is valid to the extent that it is more comfortable to act in a moral way if it prevents us from being abused by others, but in practice nobody cares whether we act morally or not, providing we do not break the law.

We should remember though, that law is not morality and in many cases it has nothing to do with it. However, it is applicable for the benefit of keeping order and in that respect it is highly recommended in a law conducted society. Kant tried to explain morality as an inner law, present in all people, regardless of our nation and identity. The moral law usually comes with feelings, either of gratitude, relief or guilt. If I give 2 zlotys to a beggar I meet every day, I should feel a sense of fulfillment. If I apologize to a friend I haven’t spoken for three months-I should feel relief.

All these common situations that take place in our life evoke certain feelings which can be caused by our morality. Gratitude has no particular use, but if we were to function without it, this would signify that we live in a determined world, where we can neither blame nor show appreciation towards others. Morality helps us in building relationships with people and it is a feature present only in human beings. It is, therefore related to the soul rather than the body. To conclude, it appears that morality is a non substantial feature, present in all humans.

Many philosophers tried to explain the reason for morality and even though neither has found a perfectly valid argument for and against morality, it must be somehow present in all of us. Quoting a bluesman: “You can’t live with it-you can’t live without it. “- fully shows what a peculiar thing morality is. Despite this quotation, I believe that morality as a principle of our life is valuable and useful. It may not always seem useful from the practical point of view, but from the perspective of our “soul” or our “Inner Self”, it may provide us with peace and positive energy. 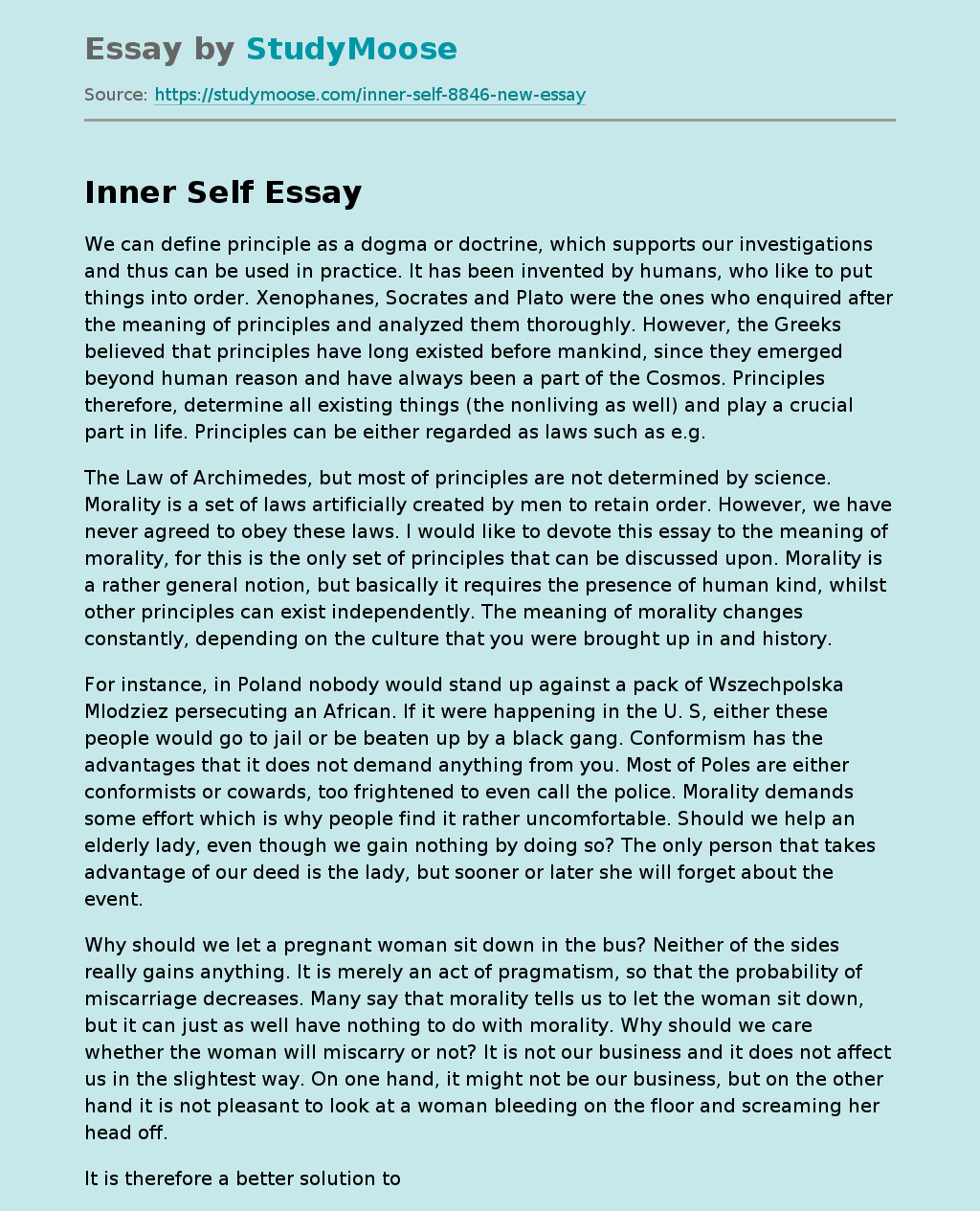