Nature and Purpose of Administrative law

Administrative law is the law that determines the organization’s powers and duties of administrative officers.

This view was held by court in cases of Ridge v Baldwin2 and Breen v Amalgamate Engineering Union.3 Administrative law is the law relating to public administration. It is concerned with the legal forms and constitutional status of public authorities; with their powers and duties and with the procedures followed in exercising them; with their legal relationship with one another, with the public and their employees; which seek, in varied ways, to control their activities.4 Administrative law determines the organizations powers and duties of administrative officers. It is the law relating to administration of government.

Administrative Law may therefore be treated as a branch of constitutional law since it flows directly from the constitution principles of the rule of law and the sovereignty of parliament and it does much to determine the separation of powers between the state and citizens. Administrative law refers generally to the laws and legal principles governing the creation, administration and regulation of government agencies at the federal, state, and local levels. It is essentially “the powers granted to administrative agencies, the substantive rules that such agencies make, and the legal relationship between such agencies, other government bodies, and the public at large.”5 The difference between constitutional law and administrative law is that constitutional law covers the national legislative powers, topics , functions of government hierarchy and status of courts of law, limits of personal liberty and rights of individuals, law of citizenship and status of aliens, status of national institutions such as Universities, Army, Police and Prisons whereas administrative law covers the legal framework of government, administrative functions, judicial control that is courts must ensure that there is rule of law, discretionary power, natural justice (equity), remedies and liabilities, legislative and adjudicative procedures.

Administrative Law is more concerned with: Wrongful acts such as errors of law and fact, using power for wrong purposes, irrelevant and relevant considerations in decision making as well as issues to do with acting in bad faith. Failing to act i.e. fettering discretion, consideration of irrelevant things, delegation which is unauthorized and failure to act. Procedural impropriety under statute – breach of Natural Justice that is the rule against bias – “nemo judex in causa sua”, financial bias and other bias and uncertainly in the test of bias such as the right to a fair hearing: “audi alteram parten” judicial, quasi- judicial and administrative functions.

The audi alteram partem rule seeks to promote objective and informed decisions. Thus it is important that it be observed prior to the decision.6 The rule would normally apply before an administrative organ performs its act7 The audi alteram parten rule is initially regarded to be applicable only in those cases where it could be said that administrative action in question violated the rights of the individual. The rule entails four principles. Firstly, a party to an administrative enquiry must be afforded an opportunity to state his or her case before a decision is reached, if such a decision is likely to affect his or her rights or legitimate expectations. Secondly, prejudicial facts must be communicated to the person who may be affected by the administrative decision, in order to enable him or her to rebut such facts.

Thirdly, the rule also stipulates that the administrative tribunal which has taken the decision must give reasons for its decision. Fourthly, the rule entails that the administrative organ exercising the discretion must be impartial. As a general rule it may be said that the principles of natural justice apply whenever an administrative act is quasi-judicial. An administrative act may be said to be quasi-judicial if it affects the rights and liberties of an individual. The Zambian classical case is Kang’ombe v Attorney -General8 the dismissal was said to be based on allegations not brought to the attention of the applicant so that he could exculpate himself. The question of dismissing him from the teaching service was referred to the Teaching Service Commission under Regulations 37 and 38 of the Teaching Service Commission Regulations. The matter was referred by the Secretary General to the government to the President with a recommendation to him to discharge the applicant from the teaching service.

The Court of appeal on an appeal by the Attorney General from the decision of the High Court upholding the Commissions decisions, held that the latter had no power to review its own decision and that since the President had under the relevant constitutional provision power to intervene only when the matter in question was still under consideration by the Commission, he had no power to act in this case. It can clearly be seen that the audi alteram partum rule was violated.

It should be noted that the rule of audi alteram partum may be applied less vigorous in quasi judicial proceedings like disciplinary proceedings as was the case in Kang’ombe v Attorney General while in administrative functions the rule may be relaxed. The justification of a hearing requirement can be seen in the case of Cooper v Wansworth Board of Works.9 Bayles J held that the plaintiff should have been given a hearing before the board exercised their powers even though there was no express statutory requirement that they do so.

Constitutional Law is an allocator of power. The constitution notably allocates power to the three arms of government these being the Executive, Legislature and the Judiciary. Constitutional law is a power map, while administrative law regulates the execise power allocated to the sub organ of the state or to an institution within the state, such institution to be a subject of administrative law must perform a public function. In the Supreme Court of Zambia a political party was said to be a club which performed private functions and could not be a subject of administrative law remedies but private law and that the action ought to have commenced by a general writ.10 Under constitutional challenges the courts are normally concerned with the conduct that violates the constitution. This action can be brought up by way of a petition under Article 28 of the constitution of Zambia and the Civil Rights rules contained in Statutory Instruments No. 156 of 1969.

The constitutional doctrine clearly stipulates that one branch is in principle not permitted to encroach on the domain or exercise the powers of another branch. If the Executive exceeds the powers allocated to it under the constitution it will be said that the Executive acted unconstitutionally. The legislature’s sovereignty to legislate means it should legislate within the law and not outside it an act which deprives a citizen of an existing right is impugnable. In reality there is no strict division of powers. The National Assembly usurped adjudicatory power allocated to the Judiciary just as they made a law contrary to the constitution in the case of Thomas Mumba v the People11 in which the case was referred to the High Court by the subordinate court for determination, the applicant was being tried in the lower Court for an offence under the Corrupt Practices Act.

Under section 53(1) of the Act, it was a requirement that if the accused elected to say something in defence, he had to say it on oath only. This clearly excluded the option to make an unsworn statement. The defence submitted that the provisions of section 53(1) of the Act contravened article 20(7) of the Constitution. The Court held in that case that an accused person in a criminal trial cannot be compelled to give evidence on oath if he elects to make an unsworn statement. Consequently, the Court declared that the said section 53(1) of the Corrupt Practices Act was unconstitutional and therefore null and void and that it should be severed from the Act.

In Attorney General and Another v Lewanika and 4 others12 the Supreme Court which falls under the judiciary validated the expulsion of members of the Movement for Multi-Party Democracy the party on which they were elected to Parliament. The Speaker used Article 72 (c) when declaring the seats vacant. The Article however did not provide what happens to a Member of Parliament who resigns from a political party and does not join any political party. The Supreme Court added the words vice versa in order to validate the Speakers action. This in itself amounted to judicial legislation and was indeed unconstitutional because the Judiciary usurped powers of Parliament to Legislate.

When an institution subordinate to any of the three arms of government be it the Executive arm of government where we have Ministers and Permanent Secretary, National Assembly- the Speaker and Clerks when acting administratively, the Judicial service Commission Chaired by the Chief Justice and Administrator when acting administratively act contrary to statute , statutory instrument or regulatory conferring powers on them the aggrieved may proceed by way of judicial review or may lay a complaint to the Ombudsman also known as Investigator General on grounds that the administrative Official acted illegally, unreasonable and that procedure was not followed when so acting.

Such actions can be commenced in administrative Law by way of Judicial Review as should have been the case in Sondashi v Brigadier General Miyanda who was sued in his capacity as Secretary General of the Movement for Multi- Party Democracy. It should however be noted that Administrative law is concerned with the performance of public officials on basis that they are executing their duties in accordance with the Statute, Statutory Instruments, Regulations or By-Laws and not private matters as it was in the Sondashi Case. If the delegated power is legislative or judicial in nature, the general rule in administrative law is that such powers must be exercised by the specific person identified in the legislation.

Judicial review of an act by an administrator is limited to determining whether delegates exercised their powers within the strict parameters as set out by the law that conferred the power and duties to act. These are essentially characterized as jurisdictional questions and therefore involve determination of whether the impugned act is ultra vires. Therefore, courts may intervene if they conclude any of the following jurisdictional problems were involved in the impugned act: • Substantive ultra vires (the act was not authorized by the legislation); • The delegate exercised discretion for an improper purpose, with malice or bad faith, or with reference to irrelevant considerations; • The delegate failed to consider relevant matters;

In reviewing the legality of an impugned act, if a court determines that the act was ultra vires, it has the following remedies available: declarations; injunctions; damages; statutory appeals to a court or another administrative body; or prerogative remedies these being certiorari, prohibition, mandamus, habeas corpus and quo warranto.

Nature and Purpose of Administrative law. (2016, Aug 28). Retrieved from http://studymoose.com/administrative-law-2-essay 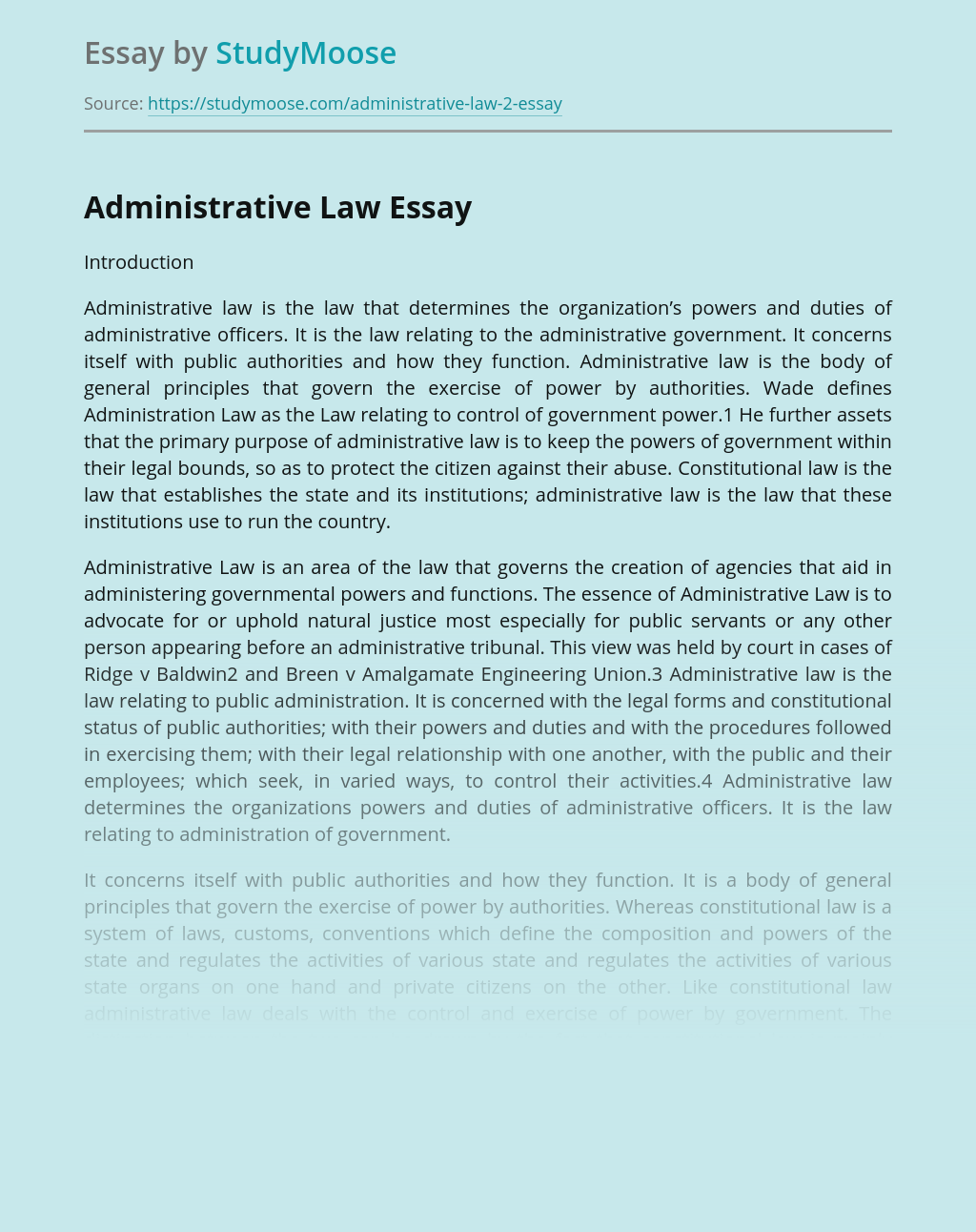 Don’t waste time
Get a verified writer to help you with Nature and Purpose of Administrative law
Hire verified writer
$35.80 for a 2-page paper
Stay Safe, Stay Original