While, as for the reception of English law in the Malay states, RJ Wilkinson said : ‘There can be no doubt that Moslem Law would have ended by becoming the law of Malaya had not British law stepped in to check it’. Before the British intervention into Malay states, Malays were governed by Malay adat law and for the non-Malays, they were governed by personal laws or if they were British subjects, English law. These laws continued to apply, subject to modifications made by specific legislation, until the formal reception of the English law.

Don't use plagiarized sources. Get your custom essay on
“ Position of English law in the Malay States and its effect to the local law ”
Get custom paper
NEW! smart matching with writer

British started to intervene into Malay states using series of concluded treaties with Malay Rulers, in return for British protection against external attack, agreed to accept British advisers whose advice had to be sought and acted upon in all matters except those concerning Islam and Malay custom. It can be seen that through the so-called Residential System, British imposed indirect rule over the Malay states.

The formation of the Federated Malay States (FMS) showed that the Malay Rulers seems started to accept the British intervention into Malay states.

Reception of English law into FMS can be divided into informal and formal reception. English law was introduced informally through the Residential System in two ways. Firstly, through the Enactment, on the advice of the British administrators, a number of specific legislation modeled on Indian Legislation which, in turn, was based on the English law. Secondly, through the decisions of the courts established by the British administrators. The higher rank of the judiciary were mostly filled by English or English-trained judges who naturally turned into English law whenever they were unable to find any local law to apply to new situations, particularly of a commercial character, caused by the very fact of British influences.

For instance, in the case of Government of Perak v Adam (1914), where it is a tort case, involving unlawful obstruction of land belonging to Plaintiff. Woodward JC said: ‘In dealing with cases of torts, this court has always turn for guidance, as a fundamental principle, to English decisions..’ The Judge should have applied Perak law instead of English law. The same goes to in the case of Motor Emporium v Arumugam. It is a case on execution of judgment through prohibition order. Terrel CJ said: ‘The courts of the FMS have on many occasions acted on equitable principles, not because English rules of equity apply but because such rules happen to conform to the principles of natural justice’.

As the Malay states were not British territories, English law could not be imposed through the Common law principle of reception. Malay states were independent and protected states and the Malay Rulers were sovereign. It can be proved in the case of Duff Development Ltd v Government of Kelantan in which the issue was whether the state of Kelantan was a sovereign state and therefore, enjoyed immunity from execution of its property. It has been held that Privy Council acknowledged Kelantan as a sovereign state. Another example is in the case of Pahang Consolidated Co. Ltd. v The State of Pahang (1933) where the same principle applied as the suit against the Defendant could not be maintained because Pahang was one of a sovereign state.

British introduced English law through legislation enacted by Malay states themselves. The omnibus introduction of English law took place in the FMS only in 1937, through the Civil Law Enactment passed by FMS Federal Council. Section 2(1) of the Civil Law Enactment 1937 provides that the application of Common law and Equity in FMS as the same like which were enforced in England subject to such qualifications as local circumstances render necessary. Whereas, the Unfederated Malay States (UMS) received the English law formally when the FMS Enactment was extended to them by the Civil Law (Extension) Ordinance 1951.

In conclusion, English common law was introduced in Straits Settlements by Charter of Justice while the Malay states, English law was not received formally in the FMS until 1937 and UMS until 1951, but it had been received long before those dates, informally and indirectly.

Position of English law in the Malay States and its effect to the local law. (2016, Mar 27). Retrieved from https://studymoose.com/position-of-english-law-in-the-malay-states-and-its-effect-to-the-local-law-essay 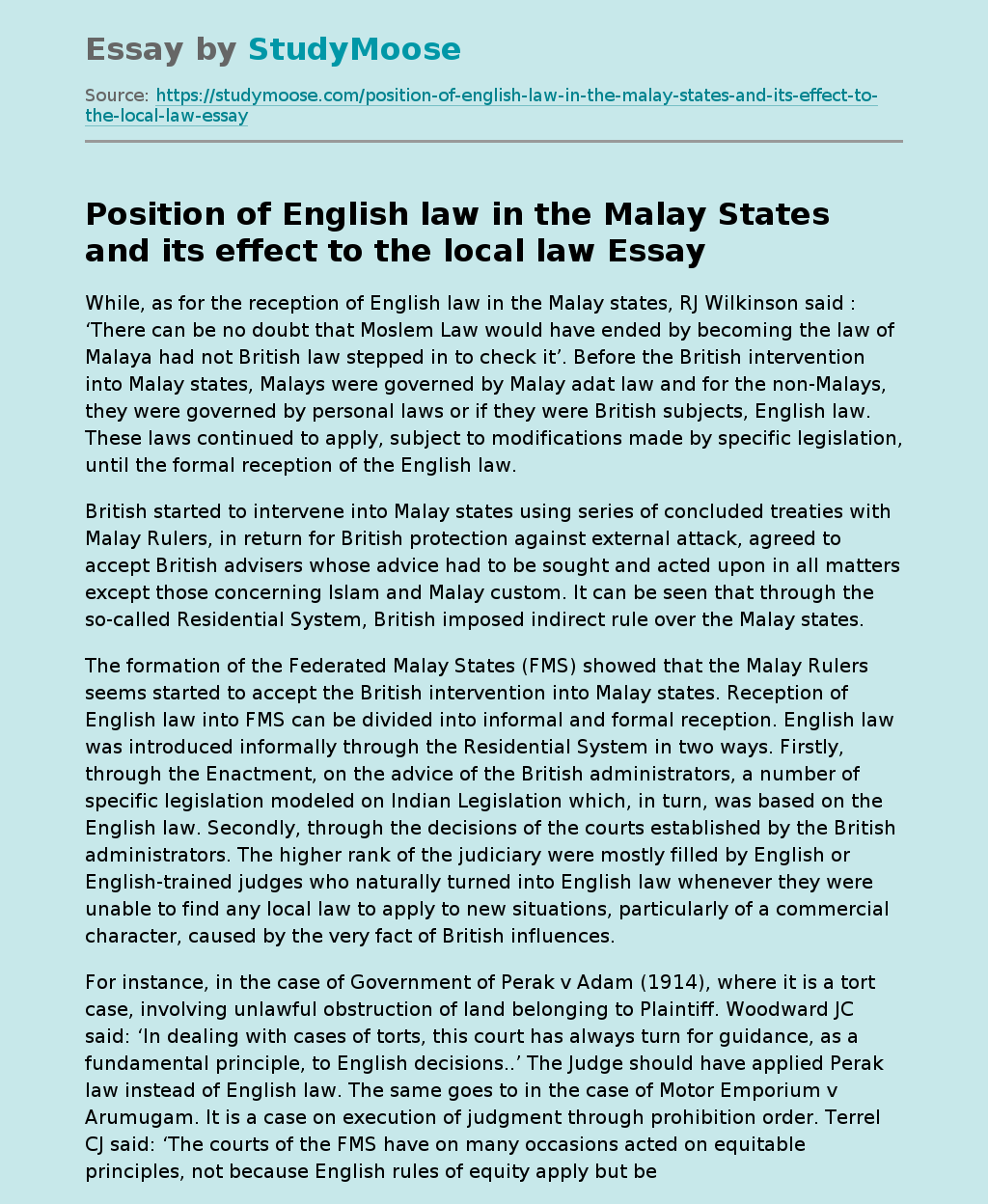