From the very beginning, society has seen women as inheriting the character flaw of Eve’s original sin. Most people see women as lustful beings because of how Eve tempted Adam in the garden of Eden, meaning they were more susceptible to the Devil. Men target the females because of their views and the roles they play in a male dominated society. Men have a more opinionated view of a woman’s duties. The Crucible portrays women as the very definition of sexual desire, open to demonic command and beneath the common beggar, with little or no reputation attached to their name.

Don't use plagiarized sources. Get your custom essay on
“ The Portrayal of Women and Their Position in Society in Miller’s the Crucible ”
Get custom paper
NEW! smart matching with writer

Society mistreated most women in Salem 1692. Being a female means she is automatically open to abuse by men and even other women who saw themselves as being above you. When men such as Reverend Parris needed to feel in control, they’d make unnecessary threats such as “I’ll show you a great doin’ on your arse one of these days”, threats as this are unwarranted for and were used just to regain the much needed authority (Miller 21).

Another example of men dominating women would be when Mary Warren says, “Mr Proctor! I am eighteen and a woman, however single!” but she has enough guts to stand up for herself (Miller 60). As if it isn’t enough to be abused by men, women such as Abigail add to it by calling good women such as Elizabeth, bitter, cold, and sniveling (Miller 12). Many men even believe they have the right to beat obedience into women.

An example of physical abuse to women is when Proctor yells, “ I’ll whip you if you dare leave this house again” (Miller 55). The maidens are to be quiet and submissive to her husband, in other words his personal slave.

The women in the late 1600’s are to follow a very strict moral and religious role. Their tasks were to take care of the home, the children and tend to their husbands every whim. From the very beginning of the play, there seems to be hidden sexual tension. Men believed, young women were compelled to destroy righteous and dutiful men through erotic means (Alter 60). Puritans believed that Satan assaulted the body through sexual transgressions. The men took the offense of dancing in the woods so seriously because at that age young women were very tempting to the men’s sexual appeal. The mens’ reaction actually seems understandable seeing as John Proctor reacts in the way they are trying to avoid. John Proctor allowed himself to be open to his sexual desires and admits it when he says, “She thinks to dance with me on my wife’s grave! And well she might! For I thought of her softly, God help me, I lusted”(Miller 110 ).

Abigail can successfully manipulate many of the characters especially men because of her beauty which causes them not to see the lies that she speaks. Abigail is definitely one of the few women who test their legitimacy as authentic definitions of sexual desire (Alter 60). Women were apparently the only ones the devil could easily convert, at least in the men’s’ eyes. The fact that the young women are claiming to be part of the devil to save their lives only gave the men more reason to believe they were actually involved with him. Most people view women as the weaker of the two sexes. In the eyes of the Puritan society they lacked the physical body to fight off the demonic attacks of Satan. Men such as Reverend Parris must definitely think even less of women since he disagrees about the devil being in his own home and how there are people beneath him in town.

Reverend Parris is a man who preaches fire and brimstone sermons and he believes if you live like him then you’ll make it to heaven. Even Though Parris believed he was a top notch Puritan, he still questioned himself when he said, “Why would he choose my house to strike? We have all manner of licentious people in the village!” (Miller 41). Parris believed he is better than the rest and above all else when he makes this statement, while his own daughter was sick, instead of worrying about her well-being he rants on about how her sickness compromises his character. Names seem to hold a very great importance. The hysterical environment of Salem causes persecution of calumny became a common fear of a good, respectable name to be tarnished. Parris even asks about Abigail’s reputation when he says, “Your name in the town-it is entirely white is it not?”(Miller 12). Abigail defends her name to a tee and even goes as far as accusing others and staying in the spotlight so she is absolved from partaking in witchcraft herself.

In life it’s said that your reputation precedes you, even after death it is what you are remembered by. “ Where she walks the crowd will part like the sea for Israel”, Abigails name is taken to a whole other level when she starts labeling the witches (Miller 53). Elizabeth is another character who knows the importance of a good name and when she is asked whether John cheated she protected him and denied the allegations (Schlueter 113). By the time the trials have been started, there is not much left to hold on to besides family and reputations. John Proctor and Rebecca both are people, “willing to lay down their lives if need be to preserve their dignity” (Schlueter 115). To hold onto something even more than life shows great courage.

The tyrant in every situation must fear something in the people he oppresses which is why he feels the need to have authority over them. In this case the tyrants would be the men and their fear of women seems overwhelming. The Puritans strict belief in demons and witchcraft is part of the reason it was so easy to believe the lies told by the girls. If you were not with them in believing you were against them. The ignorance of the people in the 1690’s regarding these things is what gives Abigail so much power and part of what leads to their downfall. The Crucible proves that in the end hard work and a good name will not exempt you from being accused of witchery.

The Portrayal of Women and Their Position in Society in Miller’s the Crucible. (2016, Mar 26). Retrieved from https://studymoose.com/the-portrayal-of-women-and-their-position-in-society-in-millers-the-crucible-essay 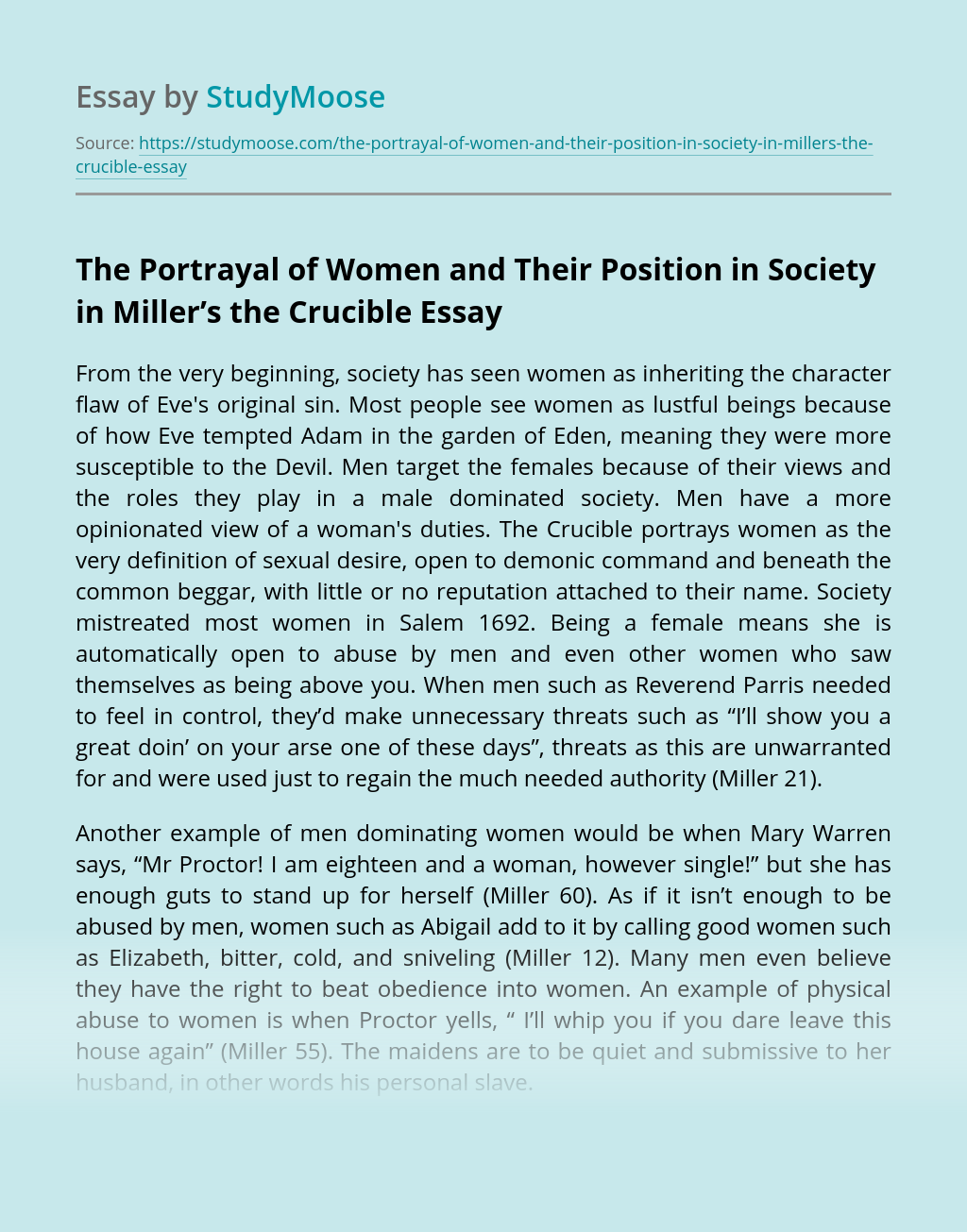