Position of Women in Victorian Society

In ‘Sesames and Lilies’, what is John Ruskin saying about the position of women in Victorian society. How would you compare and contrast your findings about Ruskin to your reading of Victorian literature so far? In addition to being a Victorian gothic novel, Bram Stoker’s Dracula mirrors the gender and sexual anxieties as well as the cultural fears of the late nineteenth century. Conflicting gender roles present in the novel include the fear of male penetration and the extreme male bonding, the mothering instinct and the New Woman, and the logical versus the hysterical male.

Don't use plagiarized sources. Get your custom essay on
“ Position of Women in Victorian Society ”
Get custom paper
NEW! smart matching with writer

Mina and her friend Lucy Westenra are the women of Dracula upon whom the men protect the ideals of Victorian womanhood. Upon meeting Mina, Van Helsing is inspired to say that she has “given me hope…that there are good women left to make life happy – good women, whose lives and whose truths may make good lesson for the children that are to be. ” Mina is surpassed to use her mothering instinct to guide the men, Mina states as she confronts Arthur that “We women have something of the mother in us that makes us rise above the smaller matters when the mother spirit is invoked”.

John Ruskin writes of women’s influence in ‘sesame and lilies’ that “it is a guiding, not a determining function”. We see this represented in Dracula because, like Lucy, Mina is susceptible to Dracula’s corruption and it is the good brave men of the novel who set out to save her.

Furthermore in desiring Mina Dracula is doubly evil because he attempts to defile the designated mother figurer of the novel. The entrance of the feminist, sexuality independent New Woman into Victorian society indicates the changing roles of women, and the theme of the New Woman plays throughout Dracula.

When referred to directly in Dracula Stoker also describes her, tongue-in-cheek, through the mouth of Mina, “I believe that we should have shocked the ‘New Women’ with our appetites” and “Some of the New Women writers will some day start an idea that a man and woman should be allowed to see each other asleep before proposing or accepting. But I suppose the New Woman won’t condescend in future to accept; she will do the proposing herself”. These remarks reflect the assumption of the day rather than Stoker’s opposition to the New Woman. However, given the fact hat there are no real New Women in Dracula, Stoker can hardly be considered a supporter of the feministic movement. Although Mina is a lot certainly closer than her flighty friend Lucy to being a New Woman, Mina is not a doctor or a professor or a journalist, but an “assistant schoolmistress”, an accepted occupation for women of the period. Additionally, while she is clearly intelligent, she not only learns but masters’ short hand and typewriting, she states vey early on in the novel that her intent is that “when we are married, I shall be able to be useful to Jonathan”.

Not only is Mina described as “sweet-faced”, “dainty looking” and a “pearl among women”, but Van Helsing gushes to Jonathan that “she is one of Gods women, fashioned by His own hand to show us men and women that there is a heaven where we can enter, and that its light can be seen here on earth. So pure, so sweet, so noble, so little egoistic – and that, let me tell you, is much in this age, so skeptical and selfish”. Stoker reminds us of the fact that Mina belongs in the category of ‘angle’ as opposed to ‘devil’.

Ruskin writes of the importance of men going outside of the sheltered domestic sphere and returning to the home and to the family to be refreshed: “This is the true nature of the home – it is the place of Peace; the shelter; not only from all injury, but from all terror, doubt, and division”. That Dr. Seward’s home is a madhouse is the perfect setting for a gothic horror novel. The asylum is where the characters base themselves, and it represents the safe place in which desire can be controllable and reason prevails. However, Mina is not safe in this home, a further example of how Dracula embeds conflicting gender roles.

Terror in the form of Dracula not only penetrates the peace of Lucy’s mother’s home, then the asylum; it also penetrates the women. Ruskin wrote, “by her office, and place, she is protected from all danger and temptation. The man on the other hand, in his rough work in open word, must encounter all peril and trial; – to him, therefore, he must be wounded or subdued, often misled and always hardened”. The men of Dracula do go out into the dangerous world to fight evil, but the way in which they attempt to protect Mina at her home in the asylum leaves a lot to be anticipated.

Mina becomes pale and fatigued, and to the audience this is an obvious sign of Dracula’s influence. The men, however, do not catch on to this and their protection of her is so incompetent it is almost as if they open the door to Mina’s bedroom for Dracula. In addition to attacking the women, there is also an undercurrent of fear that Dracula may penetrate the men as well. He is at his most threatening when he declares of Jonathan: “This man belongs to me! ” this exclamation does have homoerotic overtones, and is important in its implication of power and control, as well as its reflection of the gender controversy of the nineteenth century.

Another example of gr=ender role anxiety is that Dracula illustrates discord with respect to the Victorian assumption that men are rational and women are emotional. The conversation notion is most clearly represented in Van Helsing ‘s praise of Mina: She has a man’s brain…and a women’s heart”. However, a twist occurs with respect to the characters that are directly described as being overcome with “hysterics”, being a term that derives from the Latin word for uterus and was therefore naturally associated with women. The issue of gender roles is raised again in the later stages of the novel.

The men cannot seem to figure out whether of not they should allow Mina to help them pursue Dracula in the dangerous outside world. They are initially happy for her help, then say that their work is manly work, then they don’t want her help because of her suspected telepathic link with Dracula, and, finally they regret not letting her in on their hunting and bring her back into the fold. Mina goes along with their Victorian logic, though not without some difficulty; “their minds are made up, and, though it was a bitter pill for me to swallow, I could say nothing, save to accept their chivalrous care of me”.

However, she does eventually express her annoyance, although in a gentile way, when she confronted Van Helsing “It seemed funny to hear you order me about, as if I were a bad child! ” Finally, Van Helsing, the most vocal of all the men regarding Mina’s exclusion from their many work, states, “Our dear madam Mina is once again our teacher”. If you look at the novel’s characters in terms of a family unit, their home is an asylum, three of the brothers have proposed to the same woman, Lucy, who later dies despite their male bonding attempts, and Mina is then corrupted by the primal fear, Dracula, who is the combination of all that is evil.

Position of Women in Victorian Society. (2020, Jun 02). Retrieved from http://studymoose.com/position-of-women-in-victorian-society-essay 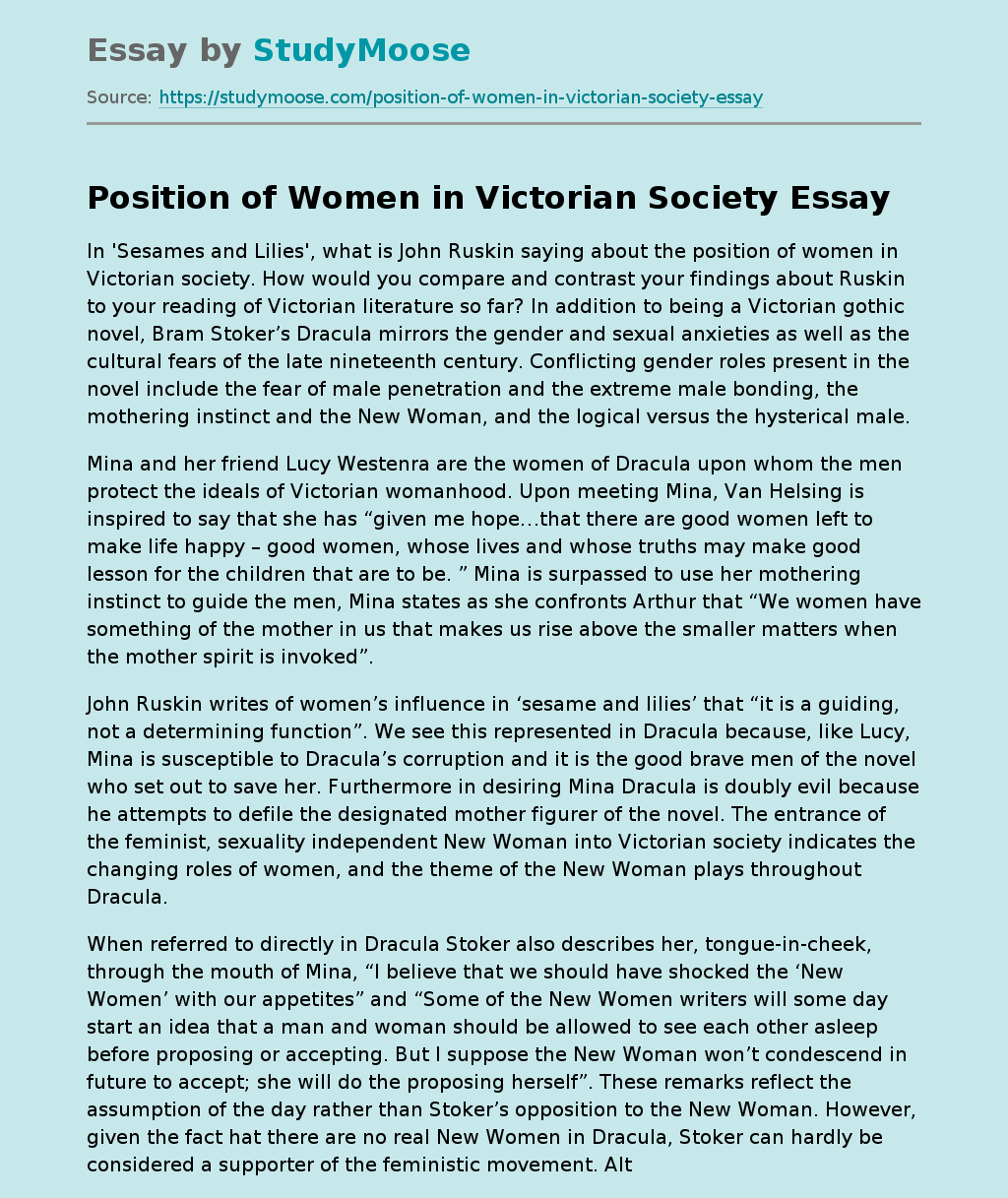