Our position in society with respect to people

Human relation is a thread which connects one human being with another. Such relations help us identify our position in society with respect to people around us. These relations provide ways to expose the hidden anthropological factor in all humans. Our appearances whether physical or emotional are often deceptive as they do not necessarily reflect true intentions. Studying human relations involves understanding the subconscious human thinking that influences our motivations (Henderson 17). The following essay deals with the importance of inter human relations on human growth and success.

Don't use plagiarized sources. Get your custom essay on
“ Our position in society with respect to people ”
Get custom paper
NEW! smart matching with writer

Keywords: social, interaction, people, relation, existence, communication, failure, understanding, business, knowledge, motive The evolution of human being from an unthinkable ape to a thinkable animal is a noteworthy phenomenon. We have learned, demonstrated and understood that man is a social animal. Several qualities which are dormant in him come to surface when man is exposed to similar creatures and situations which stimulate his brain cells. Communication capabilities and successful interaction with one another has made him share ideas and commodities for fulfilling his requirements since ancient times.

Human existence is itself a struggle against our environmental conditions. To gain all that can be gained, to achieve all that can be achieved and to conquer all that can be conquered is the motto of human living today. Demand for success in every deed has become an inseparable aspect of human efforts. Man has tremendous potential to carve path for himself and achieve phenomenal success. We have known great people such as Edison, Newton, Einstein and many more who have stood rooted against all odds and such is their success that their names are at the tip of our tongue.

It should be noted that although individual survival is possible but growth and success are fairly dependent upon establishing and maintaining human relations. For instance let us consider the case of a businessman trying to market a product to boost his company sales. Substantial improvement in productivity can be viewed with apt co-operation from people in various departments such as those concerned with product delivery, packaging, costing, advertising and ultimately the customer. A splendid combination of co-operation from everyone involved needs remarkable communication and a good understanding amongst participants.

A failure in this will always have quantifiable repercussions on the businessman’s attempts to run his company. One also has to understand that entire chain of activities needs a wise action plan and wishful involvement of people. “It is a known fact that businesses become more effective as their employees become better adjusted emotionally” (Henderson 16). Maintaining an excellent rapport by keeping healthy human relations is significant for the success of every individual involved. As rightly suggested by Huczynski, human relations have the power and ability to firmly hold entire industrial society which was once considered a shaky fabric.

This was considered possible because of inherent human desire for intimacy and predictability in day to day activities (127). We also know that unity adds strength. Unity arrives from strong bonding amongst a group of people. These strong bonds can be maintained by keeping good human relations. Maintaining good human relations facilitates co-operation and increases our power even as an individual. A good ensures support during adversities. Personal growth carries different meaning to different people. Few may find substantial growth and happiness in group work whereas some others may find it easier to tread their paths alone.

Success and personal growth do not come on their own accord. They demand involvement, hard work, determination and perseverance. Success in certain field also requires knowledge of subjects from some other areas which are to be acquired with help from other people. This involvement from other people can only happen if a good quality of interpersonal relationship exists among them. Improper human relations create huge communication gap and dampen a person’s motivation and urge. What exactly is personal growth? Expanding our dimensions of knowledge and understanding without any involvement with others is nearly impossible.

A bad relation stems from selfish motives, insufficient understanding between people and it often leads to conflicts. Such conflicts cause mental instability and are a major reason for war. A person is said to grow when he/she grows not only physically but also psychologically and spiritually. Let us understand this with the analogy of plants. A plant cannot grow on its own. Through years it has developed relations with sun, soil, water, fertilizers, oxygen, other plants for pollination, etc which are all essential for its growth. Same is the case with humans.

The crux of entire discussion lies in attempting to focus on best possible human relations. A good human relation is very essential for individual growth and success. A good relation nurtures happiness, promises satisfaction and opens new horizons for success. As Butler-Bowdown writes about Covey; until one can understand others’ way of seeing, one cannot be truly successful. Personal growth isn’t always about doing something new but about doing something in new light and learning to see world with other’s eyes (93). An exemplary shift in human relations triggers personal achievements at a high level!

Our position in society with respect to people. (2016, Sep 24). Retrieved from https://studymoose.com/human-relations-4-essay 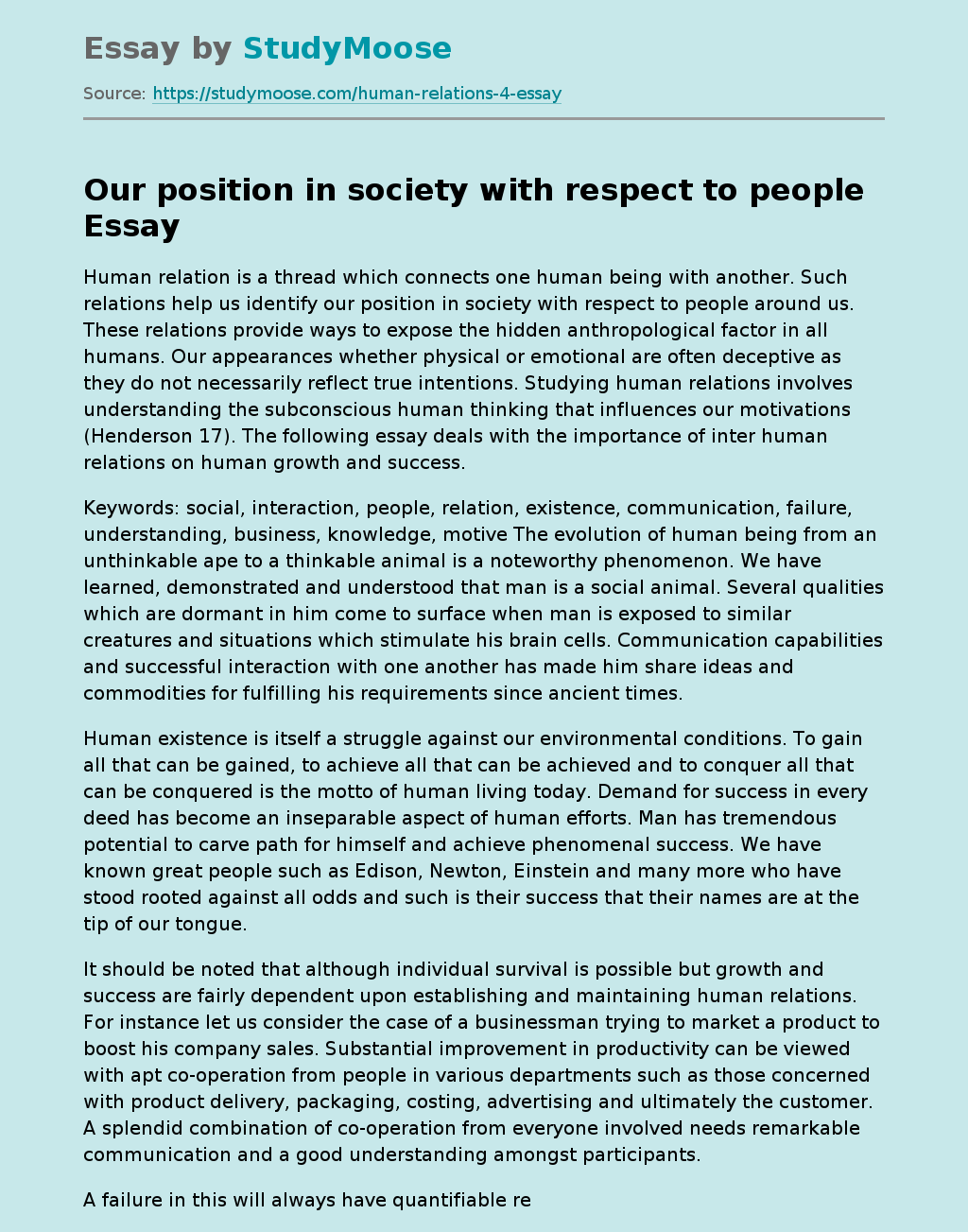