Determining the position of unknown element X in the Reactivity Series

To determine the position of Element X in the reactivity series

The reactivity series is the arrangement of elements according to their reactivity. The most reactive element is placed at the top and the least reactive at the bottom. The elements at the top can displace elements below them from their compounds

In the experiment, element X will either have elements more reactive or less reactive or both. Based on this, the position of the unknown element can be found out.

Don't use plagiarized sources.
Get Your Custom Essay on Determining the position of unknown element X in the Reactivity Series Just from $13,9/Page

In the experiment, the enthalpy (temperature) change will also show how reactive element X is.

For example if X is right above Zinc in the reactivity series i.e. element X is aluminium, then the temperature difference between reacting Al with CuSO4 will be more than reacting Al with ZnSO4 or FeSO4. This is because as the distance (number of elements in between between) the elements increases there is more difference in the reactivity level of the selected elements.

When ?E (?Energy) is +ve, the reaction taking place is endothermic and when ?E is -ve, the reaction will be exothermic. The reason behind the nature of ?H stated previously is the ?E (?Energy) of the reaction. Again; more the number of elements between the reactants (according to the Reactivity Series) the lower the value of ?E i.e. more exothermic the reaction is. This is due to the type of bonds present in various compounds. Taking the pervious example, a reaction between Zinc & a Copper compound will give a lower ?E than a reaction between Zinc & a Lead compound. Thus such reactions are more apparent.

The Metal Compound used to react with Element X

The metal compound used to react with Element X was varied as this variation of the metal will help us determine the position of element X.

Whether a reaction takes place or not

When different metal compounds are used, it is not necessary that a reaction takes place every time. The occurrence of a reaction depends on the metal present in the compound used.

?E depends on the compound used. In different compounds there are different types of bonds present and also every bond has a different energy level.

Volume of the Metal Compound taken

The volume of the metal compound taken must be kept constant as varying volumes can affect the final temperature.

The size of the strip of Element X must also be kept constant as varying lengths can again affect the final temperature.

1. Take a strip of Element X and cut it into 7 equal pieces

3. Put a thermometer into one test CuSO4 and measure the temperature

4. Now put a piece of Element X into the test tube and measure ?H

The strip of element X given to us was shiny, this indicates that element X is not very reactive. Reactive metals such as aluminium usually form a metal oxide layer on top of them thus losing their luster. When Element X was put in sulphate of potassium (which is a clear solution), the solution remained clear, and the piece of Element X also remained shiny; thus indicating no reaction. Element X behaved similarly for sulphates of Magnesium, Zinc & Iron.

A piece of Element X into PbNO3, after a lot of time, the solution started to become cloudy (white precipitate), indicating a reaction. In this reaction the ?H was +1ï¿½C.

In CuSO4, the piece of Element X was deposited with black precipitate all over. Also the solution becomes lighter blue as compared to the pure CuSO4(aq). It was a very slow process.

In AgNO3, the solution turned cloudy (black) immediately after suspending the piece of Element X.

If we observe the table below carefully, we notice that Element X did not react with K, Mg, Zn and Fe. But it reacted with Pb, Cu & Ag. This means that element X is Sn; because the reactivity series goes as follows: K, Na, Ca, Mg, Al, Zn, Fe, Sn, Pb, Cu, Ag, Au.

As I stated in my hypothesis, that the further apart the elements are (in the Reactivity Series) the lower the ?E is. This means that the reactions are more apparent (vigorous) and also more heat is produced in such reactions.

Determining the position of unknown element X in the Reactivity Series. (2017, Nov 17). Retrieved from https://studymoose.com/determining-the-position-of-unknown-element-x-in-the-reactivity-series-essay 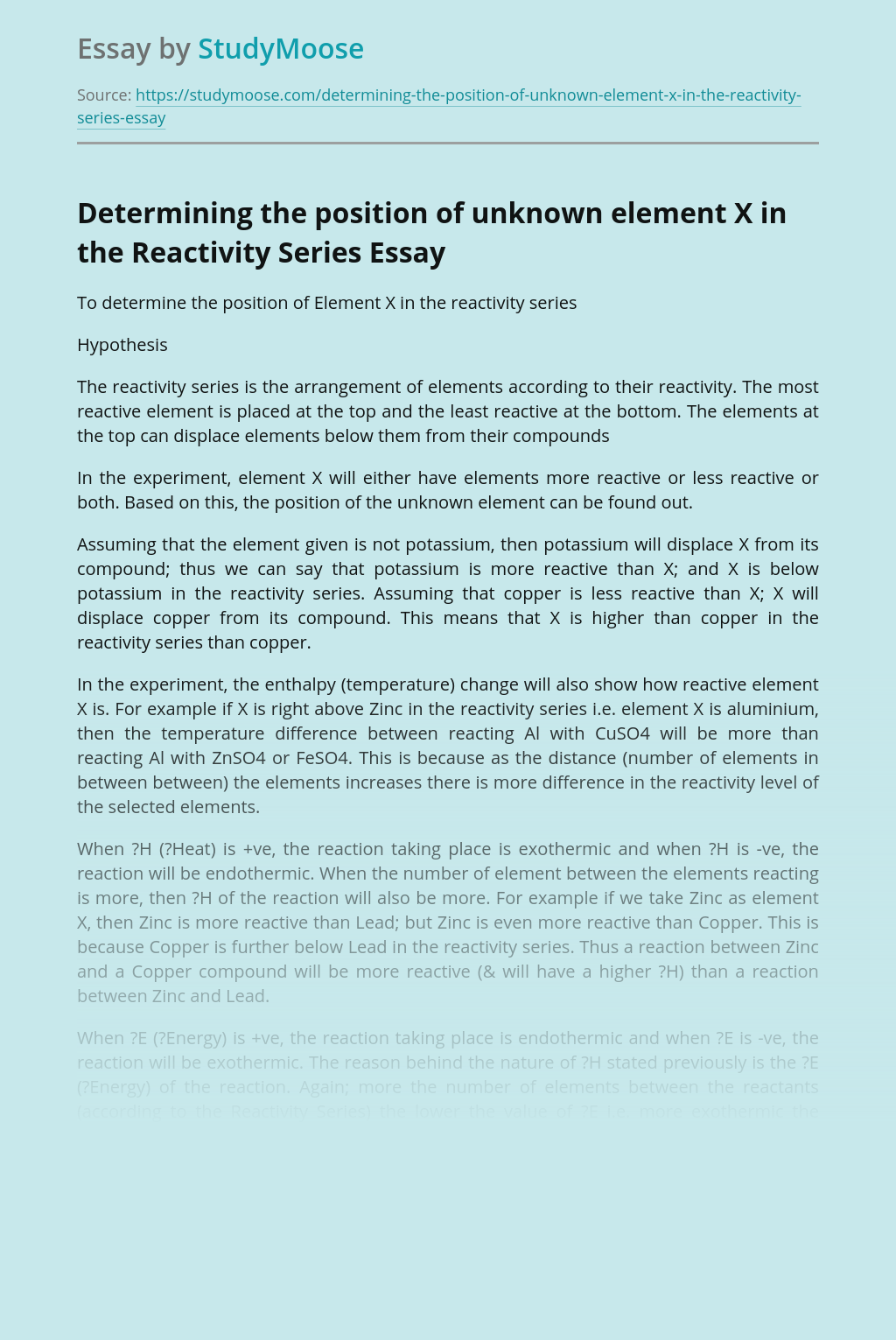 Compare and Contrast Luther and Calvin

Advantages and Disadvantages of Being an Actuary

Intro I. Great afternoon to Ms. Parimala and my fellow schoolmates. II. The subject of my discussion today is Benefits and drawbacks of Being an Actuary. What is an actuary? Experts in threat management Uses mathematical abilities to determine possibility and increase of future occasion Useful information to many markets III. The benefits of being...

Get Essay
Constitution vs Articles of Confederation

As one of the creators of the new Constitution of 1788, you are chosen to present its strengths as compared to the weaknesses of the Articles of Confederation. What areas of importance will you stress in attempting to get it passed unanimously? Give good well-reasoned arguments in a report of approximately 400 words. You will...

Whilst the layout of reports is often a personal or corporate matter, it is wise to follow a few simple rules. )The report should have a beginning, middle and end. b)It should be laid out in a manner that makes it easy to read (e. g. a title, sub headings, references to observation sheet where...

When one talks of hooking up, what comes to the mind is whether it is going to be kissing, heavy petting or something more in terms of sex and things that come before intercourse. College students are always in constant conversation about sexual triumphs. Students talk about having an awesome time with that beautiful girl...