Comedic element in the Importance of Being Earnest

Throughout the play, Oscar Wilde portrays several binary opposites using the characters and themes of the play, such as the town and country, class, age, gender and morals. However I don’t think that the binary opposites are the main source of comedy in the play.

The reason I find it comical is from the fact that the play is a comedy of manners as well as Wilde’s satirising of the Victorian morals. Wilde’s depiction of Victorian caricatures also creates amusement for the audience.

Don't use plagiarized sources. Get your custom essay on
“ Comedic element in the Importance of Being Earnest ”
Get custom paper
NEW! smart matching with writer

In the play, trivial things are regarded so seriously and the serious things in life are treated with sincere and studied triviality. This philosophy allows for a very comic scene at the end of Act II, as it ends with Jack and Algernon eating and arguing over muffins instead of chasing after their beloved ones who have found out the truth about them and seems like the marriage is off. So even though the binary oppositions in the Importance of Being Earnest provide comedy, I don’t believe that they are the key comedic element in the play. A binary opposition is portrayed with the theme of gender and the contrast between male and female.

The play is set during the Victorian era where men have greater influence than women. Usually men would make all the political decisions for the household and the women would be the mother and housewife. However, Wilde reverses gender roles by placing Lady Bracknell in a position of authority and power in the house.

And to add to this, he makes the male characters such as Jack and Algernon quite irresponsible. When Gwendolen is talking to Cecily about who she is, she talks about her father. “Outside the family circle, papa, I am glad to say, is entirely unknown. I think that is quite as it should be. The home seems to me to be the proper sphere for the man.”(Act II.266) Wilde uses Gwendolen to go against the traditional roles of men and women of the time by implying women can also be business people and work for the family instead of being just a housewife. Oscar Wilde also reverses the typical characteristic of women in relationships of the Victorian times by having Gwendolen and Cecily the controlling person in their relationship.

The man would usually court the woman but once again, this has been reversed by Wilde as the women (Gwendolen and Cecily) both chase after their loves. Gwendolen goes all the way to the country in secret which would be very surprising for a lady of high social class and technically speaking, Cecily created her own relationship with Ernest and Algernon just played along with it because it worked in his favour. You couldn’t help but laugh at the fact she even cancelled the engagement at one point simply to make it more exciting. But there are situations where the women act accordingly to traditional roles so that the play doesn’t change the Victorian ideals and also that the play works out to follow the traditional happy ending with weddings after overcoming the obstacles that was set out by all the circumstances and other characters. Another binary opposite is shown through class and society. The contrast is between the upper class and lower class.

Many of the play’s characters are from the high social class and are aristocrats like Algernon. Then there’s the lower class characters like Jack and the people of the manor and Lane who is Algernon’s servant. Nearly all the characters in the play lie to or deceit another character but they rarely show any regret about doing so. In fact, there is more regret when telling the truth after lying. When Jack is forced to explain everything after Gwendolen and Cecily become suspicious about Ernest existing, he answers; “Gwendolen – Cecily – it is very painful for me to be forced to speak the truth.

It is the first time in my life that I have ever been reduced to such a painful position, and I am really quite inexperienced in doing anything of the kind.”(Act II.348) This shows that Jack doesn’t consider honesty to be very important as lying about things makes it easier for him to live his life. The lower classes in Earnest are less pretentious and more humble in comparison to the upper class. A major contrast in class is shown through Gwendolen and Cecily when they sit down for tea. After some heated words, they believe the other is trying to steal their love and they show some hostility towards each other. This exchange takes place in Act II. (308-314) “Cecily: May I offer you some tea, Miss Fairfax?

Gwendolen: (With elaborate politeness) Thank you. (Aside) Detestable girl! But I require tea! Cecily: (Sweetly) Sugar?
Gwendolen: (Superciliously) No, thank you. Sugar is not fashionable any more. (Cecily looks angrily at her, takes up the tongs and puts four lumps of sugar into the cup.) Cecily: (Severely) Cake or bread and butter?

Gwendolen: (In a bored manner) Bread and butter, please. Cake is rarely seen at the best houses nowadays. Cecily: (Cuts a very large slice of cake, and puts it on the tray.) Hand that to Miss Fairfax.” Cecily takes advantage of Gwendolen’s obsession with fashion and appearance to others. To Gwendolen, these choices are important statements on one’s stylishness and reputation amongst peers and to people in society. Here, Cecily takes advantage of her lower birth to insult Gwendolen. Gwendolen is of a high social class and a luxurious upbringing compared to Cecily who lives in the country with Jack as her guardian and under the care of Miss Prism. When talking about Gwendolen and Cecily, these two characters are used for another binary opposite of the town and the country. “When one is in town, one amuses oneself. When one is in the country, one amuses others. It is excessively boring.” Firstly there’s Jack who is trying to get away from the boring life in the country and into the town to spend time with Gwendolen even though he is using Ernest Worthing as his name and living a double life unbeknownst to the people in the country as well as in town.

Then there’s Algernon who is trying to get away from the life in town as it has become routine and boring and he wants something different so he goes into the country. He uses the excuse that he has a sick friend called Bunbury on the verge of death. He himself calls this ‘bunburying’ and believes that Jack is doing the same thing. However, after finding out that Jack has a beautiful, young ward in the country, he goes out in to the country to try and get her to fall in love with him. This relates to the morals of the men of the Victorian times, which if was accurate according to the play, was wrong and deceit was used to get out and have some fun implying the hedonistic lifestyle people had back then. Although all these can cause humour and several comedic situations, in my opinion, binary opposites aren’t the key comedic element in the play. The main reason the play is funny is because the play is a comedy of manners. The utilisation of stock characters, such as Algernon representing the schemer, as he secretly notes down Jack’s country house address and visits Cecily.

By imitating and trying to marry into the aristocracy, Jack is a traitor to his own class, and is the hypocritical stock character. And Lady Blacknell as the interfering old parent who will not allow the marriage of Jack and Gwendolen because Jack has no parentage and Lady Bracknell ultimately becomes the obstacle that the two must overcome. All these provide lots of comic exchanges throughout the play allowing for a traditional rom-com finale. The structure of the play is also vital as it contributes to comedy as the plot consists of rapid twists in events, often precipitated by miscommunications. Ernest is really Jack. He lives two lives. He can’t marry without parents. Algy chases Cecily. Gwendolen chases Jack. There is no Ernest. The marriages are off and then back on. Lady Bracknell comes and marriages are off again.

Truth about Jack is revealed and he is actually Ernest. Everybody gets together with their love and marriages take place. Throughout all this, a lot of misunderstandings take place and lies come out in the open at the expense of the honour of others. Another counter argument that is a key reason to the success of comedy in Importance of Being Earnest is Wilde’s use of satire on the Victorian morals and his depiction of Victorian caricatures which creates amusement for the audience. The obvious example of this is Lady Bracknell even though she is the opposite of how a Victorian woman was. Summing everything up, Wilde’s use of binary oppositions contribute to quite a bit of the humour from the play but after considering everything, I conclude that it’s not the key comedic element in the play. The fact it is a comedy of manners and the satire of the upper class and Victorian morals, is the reason I found it funny.

Comedic element in the Importance of Being Earnest. (2017, Jan 22). Retrieved from https://studymoose.com/comedic-element-in-the-importance-of-being-earnest-essay 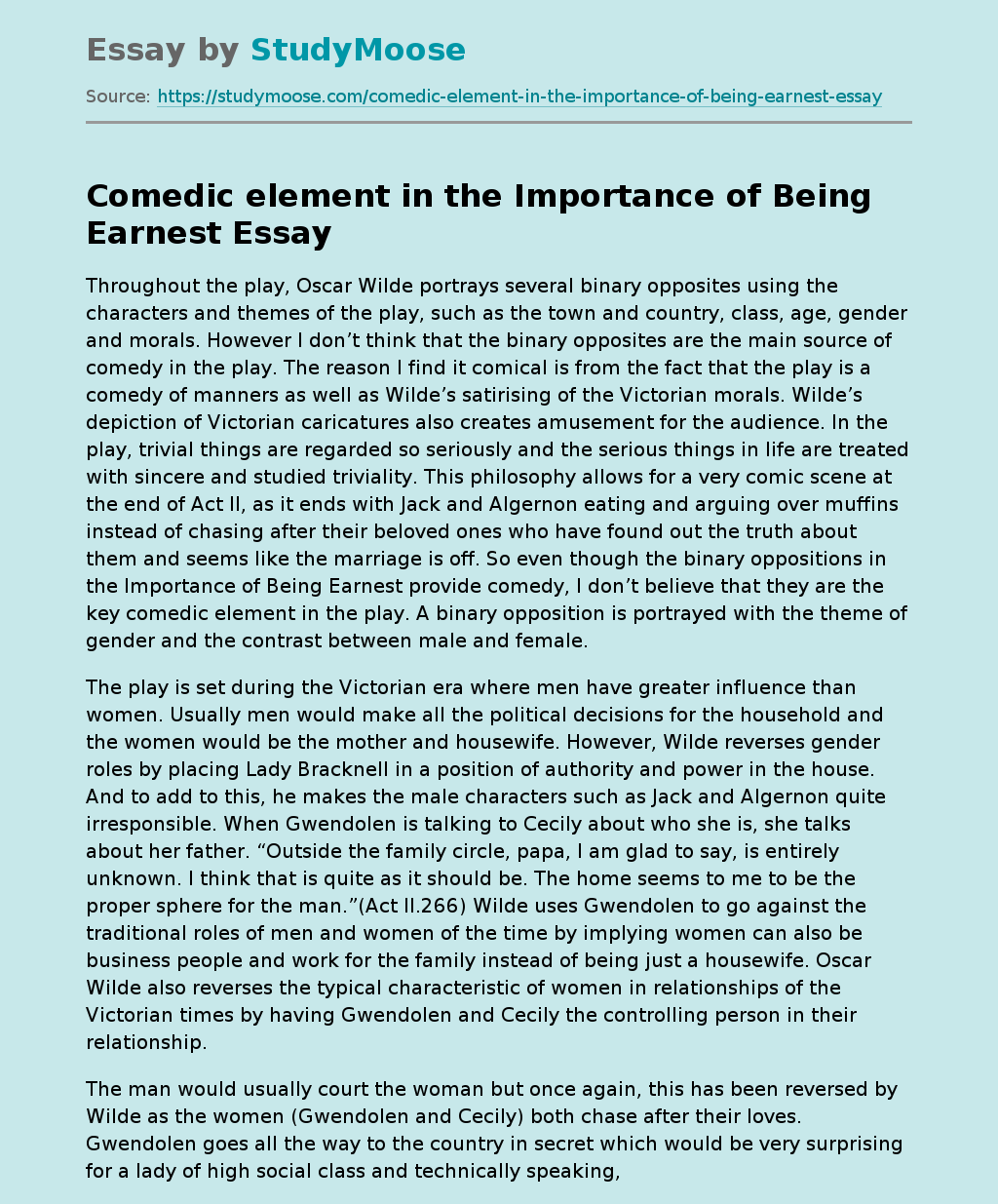