"Importance of Being Earnest" Victorian Values

The Importance of Being Earnest A Trivial Comedy for Serious People is regarded as one of the most popular works of Oscar Wilde not only because of the fact that his career came to a scandalous and tragic end following the weeks of play being published, but also the way he alluded the Victorian values in the play. The play was published at the end of the nineteenth century, also known as “Victorian Era”, named after the Queen Victoria’s reign at the time, during which there were contradictory issues within the social structure of the society.

Don't use plagiarized sources. Get your custom essay on
“ “Importance of Being Earnest” Victorian Values ”
Get custom paper
NEW! smart matching with writer

Since literature has always been a tool for reflecting one’s ideas, criticism or praises, it in holds the reflections and the impulses of the age it is written. The Importance of Being Earnest stands out both as a drama and a satire in which Wilde satirizes the Victorian society and its moral values that are going to be discussed in detail in the following sections.

However Victorian Era is known to be a serene and wealthy time, there were numerous issues that were the main concerns of most of the writers and poets of the time in their works. Those issues were mostly class distinction, institution of marriage, inequality between men and women, steep between wealthy and poor, religion, corrupted moral values and hypocrisy. The play includes all these issues in an absorbed way within the characters and their speeches. The name of the play “The Importance of Being Earnest” is also satirical in a way it implies the importance of earnestness at the time it was written.

In Victorian Era, “earnestness” was regarded as of the top ideal of the society, as a matter of fact, the society was so much engaged with the false ideals of earnestness that it could go over the top to gain this characteristic. The ideal of earnestness first started to reform the lower classes and it spread to the upper class later. The upper-class people tried so hard to become earnest that they increasingly became double dealer to live their life earnestly, that is to say, the play is all about being earnest and the title “The Importance of Being Earnest” literally reflects on what Victorian society valued at most. Furthermore, the title “Trivial Comedy for Serious People” reflects on the seriousness of the upper-class people who gave great importance to the responsibility, truthfulness and duty all of which are being mocked by the writer in a paradoxical way throughout the play. He puts the emphasis on the “triviality” of these important values taken very seriously by the upper-class society by cutting a ridiculous figure in the play.

Another background of the title is about the popularity of the name “Earnest” at the time which was regarded as a respected and well-liked name by the society that places the emphasis on the Victorian values as being formalist for judging people even with their names. Society fell so deeply in love with the idea of being earnest that men could cross any limit to become “earnest” and women to marry someone who is “earnest” of which the play’s themes is consisted. In the late nineteenth century, British people became so hypocritical so as to have earnest manners and live life earnestly that they were ready to pay any price for it such as compromising with anything, becoming dangerously arrogant and selfish which made them evils who wore down and corrupted the morals of the society. Throughout the play, Wilde elaborates these fake ideals and the corruption of the society for being earnest so conscientiously that he carries away the readers or the audience to the Victorian Era in England at the time and leaves the remarks of the play to them as an outer point of view. It is important to note the Victorian values in England at the time in order to understand and analyze the play in depth.

Although truthfulness, duty, responsibility and work ethic are regarded as the top moral values of Victorian era, years between 1837 and 1901, which corresponds to the time when the play was written and performed, involved so much more than those. Victorian era was a period of transformation for the British, including a number of economic and political changes and therewith, there were several different contradictory issues in the society which of those were the main points and subjects of numerous literary works, including The Importance of Being Earnest. Since the Victorian society and Victorian values are unique and have incomparable characteristics most of which are represented humorously and satirized sarcastically in the play, they will be discussed in different subsections.

Social class difference among people in Victorian era was one of the major matters. The social classes were consisted of the upper class, the middle or working class and the lower class all of which were defined and shaped according to the financial status, family background and occupation of the family. The main reason of this social class distinction was the Industrial Revolution which transformed England into a growing economical and political power in the world. Along with the industrialization, the mood of the country had started to change. An age which started with an optimism and confidence turned the atmosphere of the country into uncertain and serious one. The rules formed throughout the Victorian era had strong influence on individuals’ social standards driving them to behave in a socially acceptable way in public.

There was a huge gap among the social classes, “Between those who were sunk in poverty and those who were not” (Hadingham, O. (2019). David Cannadine, Victorious Century: The United Kingdom 1800–1906.p 112.) and this matter was not ignored by the writers of the time, as Oscar Wilde did not, on the contrary, it was the main theme of most of the literary works being brought to the light through mockery and satire. The play Importance of Being Earnest is a comedy of manners which aims at satirizing oddness among the members of middle and upper class in Victorian England. The oddness reveals itself within the behaviors and attitudes of these social classes which are quite pointless and absurd.

In the play, the social classes are presented in different ways one of which is the setting. The first stage direction in Act I “The room is luxuriously and artistically furnished.” depicts a wealthy high-class aristocratic house type. Also, in the beginning of Act II, the stage direction for the setting is described as follows “Garden at the Monor House. A flight of grey stone steps leads up to the house. The garden, an old-fashioned one, full of roses” This description helps the readers understand the setting in which a lower-class family live. Another way of presentation of the class distinction in the play is manners. The aristocracy in the play are flaunted with their superiority to the lower class. These characters are arrogant and they have pride. For instance, in Act I, Algernon says “I’m afraid Aunt Augusta won’t quite approve you being here… The way you flirt with Gwendolen is perfectly disgraceful. It’s almost as bad as Gwendolen flirts with you.” It means that Aunt Augusta (Lady Bracknell) as an upper-class lady always sees the lower classes “bad” and “disgraceful”. Moreover, Lady Bracknell’s inspection of Jack’s socioeconomic status reflects the Victorian world in which she was created. This character is a typical lady of Victorian society who focuses on personal benefits. Even though it is felt that she is a respected character, she is foolish, arrogant and class conscious. Other characters such as Gwendolen and Algernon also represent the upper-class society with their names and their appearances. Style and appearance have great importance for upper-class members and actions, manners, voice of tone are the best picture of their upper-class status all of which can be referred from the tea ceremony scene in Act II.

In the Victorian era, it was pretty important to marry someone within own class and get wealthy through marriage and so, marriage was seen as a careful selection process. So, marriage is significantly important in The Importance of Being Earnest both as the main virtue prompting the plot and as a subject for debate. It is possible to see a discussion about marriage throughout the play in different scenes. The first scene of the play starts with a dialogue between Algernon and his servant talking about marriage and from that dialogue, it is clear that love and marriage do not bound together and even more, as Algernon suggests, they go against each other. After the matter of marriage is introduced in that dialogue it becomes a recurring issue all over the play. Another question of the nature of marriage takes places within the dialogue between Algernon and Jack discussing the nature of marriage when they try to come to a conclusion about whether it is a pleasure or business and Lady Bracknell mentions about the issue by stating “An engagement should come to a young girl as a surprise, pleasant or unpleasant, as the case may be.” Also, the list of assumptions about the nature and the aim of the marriage she has when she has interviews with Jack reflects the conventional occupations of Victorian aristocracy which are social position, income and character. Indeed, it looks like she does not have respect for marriage institution because she tries to make Algernon date with Mary who is already married. To illustrate more about the spouse selection of the ladies, the scene where Gwendolen says to Jack “My ideal has always been to love someone of the name of Earnest.” adds up to that marriage was everything that matters for a woman in Victorian era and selection of the ideal husband of a woman depended on his superficial characteristics.

In the play, Wilde mocks the institution of marriage with the character Algernon by giving him a characteristic who has a negative mentality on marriage by saying “Divorces are made in heaven.” which claims that most of the married people in that time do not care about their marriages and most of those people are even capable of flirting with someone else while their spouses are sitting next to them.

"Importance of Being Earnest" Victorian Values. (2021, Mar 26). Retrieved from https://studymoose.com/importance-of-being-earnest-victorian-values-essay 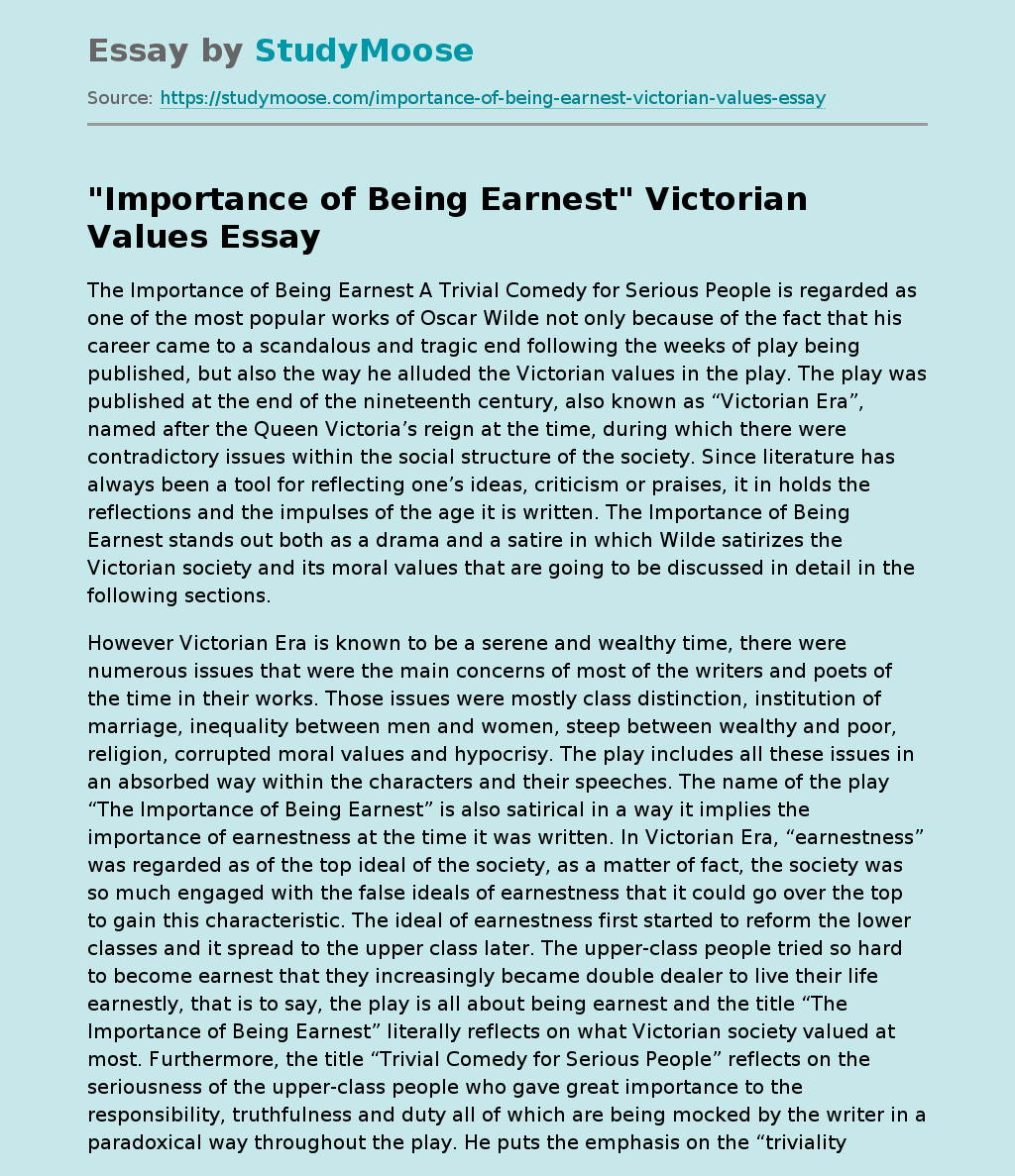