Thomas Stearns Eliot was a Modernist literary figure, part of a cultural movement which involved innovation and experimentation with art and literature as a reaction against industrialisation, war and the formality and optimism of the Victorian period. Eliot’s Preludes was written in England early in his poetic career – sometime around 1911. It encompasses many of the techniques and styles of modernist poetry by concerning the degradation of society, spirit (religion) and quality of life due to the thirst for status and urban expansion caused by the industrial revolution.

Eliot’s Preludes conveys the mundane and repetitive nature of our lives in the modern, urban world. It uses a variety of poetic techniques including imagery, sound patterning, form of the poem and the use of personae, to render these themes. The poem itself consists of four descriptions of urban life at different times of the day. Within this day the monotony and futility of human existence is highlighted. The first prelude describes the evening – ‘evening settles down.

The Prelude depicts a rainy, windswept evening that seems to have that dreary feel of the day’s end, especially with the imagery of strewn newspapers as leftover, unwanted rubbish. The monotonous rain beating down works together with the rhymes ‘passageways – days’, ‘wraps – scraps’ ‘lots -pots’, ‘stamps – lamps’ where the repetitive ‘s’ endings adds a sense of dullness and weariness to the prelude. “Smells of steaks in passageways’ evokes unpleasant images of back alleys filled with smells from unclean apartments and rotting garbage.

The alliteration provides the responder with an unpleasant hissing sound which further adds to the distasteful nature described.

Furthermore through the assertion of “Burnt out ends of smoky days,” Eliot illustrates that the fire, the sense of life in these people’s world, has gone out, and is left with only the dirty smoke to remind them of the possibilities life once held. The streets are full of “scraps,” the leaves are “withered,” and their lives are “vacant,” “lonely,” and “broken. Evidently, the imagery in the first prelude is very strong, and one gets the feeling of being in a cold, wet, dirty city at night, reflecting the lives of those who live there. Such connotations assert Eliot’s view of the modernist world, and thus illustrate his views of the associated context, that being an industrialized society of 1911.

The second prelude progresses to describe the wakening of the modern world to a man with an apparent hangover. “The morning comes to consciousness, Of faint smells of beer. In the prelude, Eliot presents the idea that the people of the city merely repeat their actions each day, as if their life revolves around nothing but routine, similar to a person who wakes up in the morning with a heavy head. Eliot refers to their actions as “masquerades that time resumes,” showing his opinion that everyone plays the part they are expected, to conform with society, and that such an action will never change. This illuminates Eliot’s idea that people have lost a sense of identity and individuality.

They are an entity, a mass, a storm of “muddy feet that press to early coffee-stands. ” The fact that Eliot refers to people as “hands” and “feet” further emphasises the concept that people in our modern day society are void of personality, leading dull monotonous lives, as an impersonal tone is employed. As such, one comes to see that Eliot conveys the message and his view of his context, that being; this ‘modern’ society through the consequences of modernization has become a mass of one, void of individualism and life.

The negative imagery is returned to the start of the third prelude which portrays the dark early hours of the morning. In this section of the poem the persona begins to use ‘you’ in an almost authoritative tone. “You” in such a context, depicts any one of the many ‘lifeless’ people living in this dystopian society. The “thousand sordid images” which “constitute” the watched person’s soul, are, presumably, the same types of images which have been previously related, images of grime and squalor.

However, “The light crept up between the shutters” symbolically allows a truth to creep through the dark monotony of life, and the “sparrows in the gutters” symbolise hope in destitution. The persona realises that the people go through their routine every day, without even realizing that there is in fact hope for change, and that they are missing out in life. The people are so entrenched in their everyday lives that they cannot step back and view their lives from the outside, as the person does. It understands something about them that they themselves do not.

In the last lines of the poem, the persona clasps “the yellow soles of feet in the palms of both soiled hands. ” Such a line is ironic in the sense that sole is a synonym of soul, and soiled can not only mean unclean but also corrupted. This is turn illustrates the notion that Eliot could not only be commenting on the lack of hygiene and bad living conditions in the city, but also on the sin and corruption prevalent in its society. As such one comes to see that Eliot views the society of that time as one that has been corrupted and degraded, however, conveys hope in its redemption.

The final Prelude, set in the afternoon, reveals Eliot’s belief that the spiritual elements of life remain distanced from those of everyday existence. The first three lines give reference to religion (namely Christianity) – ‘His soul stretched tight across the skies, That fade behind a city block, Or trampled by insistent feet. ‘ ‘His’ can be interpreted as Jesus or God who is looking over mankind from the heavens; however ‘he’ is obscured by their buildings or forgotten by the crowd, hurriedly conducting their day-to-day business.

Eliot continues to say that this soul is repelled by “eyes assured of certain certainties, the conscience of a blackened street impatient to assume the world. ” Such, expresses that god had been defeated by the miseries of this cold, dark city, and the people have become convinced of “certain certainties” concerning life and God. The blackened street refers to the people of the city, whose consciences are blackened, sinful, and devoid of a spirit. After such strong dialect however, the second stanza of the prelude, conveys a more positive tone, a hopeful one, contrary to the rest of the poem.

The shift to first person speech emphasises such a concept as a more personal tone is employed. ” I am moved by fancies that are curled, Around these images, and cling: The notion of some infinitely gentle, Infinitely suffering thing” The phrase “infinitely gentle, infinitely suffering thing’ seems to express a belief and desire for something more meaningful than the alienation and futility that the persona feels. Additionally, the terms; “curled” “cling” can be seen to allude to a newborn baby, symbolising a fresh start, that is, a chance to make things right.

However, the persona sharply turns away from this thought and gives a bitter, cynical laugh, declaring that life and the world around him is nothing more than like old women gathering broken pieces of driftwood for fire. ‘Wipe your hand across your mouth, and laugh; The worlds revolve like ancient women Gathering fuel in vacant lots. ‘ By wiping a hand across the mouth and laughing the persona could be doing so bitterly, due to the obvious way that society is slumping into depression rather than happiness.

The fact that the world is likened to the ancient women gathering fuel means that humans try to do so much for happiness by believing that seeking fame and fortune can bring it, but in reality, this quest is in vain (such as looking for something in an empty space) with mankind ending up probably just as satisfied as when he started. Preludes draws greatly from the styles and subjects characteristic of Modernism. The feelings of despair and of the dystopia within the poem (which is meant to reflect reality) are fairly typical of the period.

Eliot’s concern with the loss of religion and also the destruction of nature are clearly influenced by the ideals and standards of this genre. The Preludes are in fact not preludes to anything better at all, (irony in the title); they speak of how city-life and urban expansion will lead to destruction and spiritual chaos. It is mankind and his spirit who is suffering, but it is also he who is causing the world and all that is in it to suffer as well. 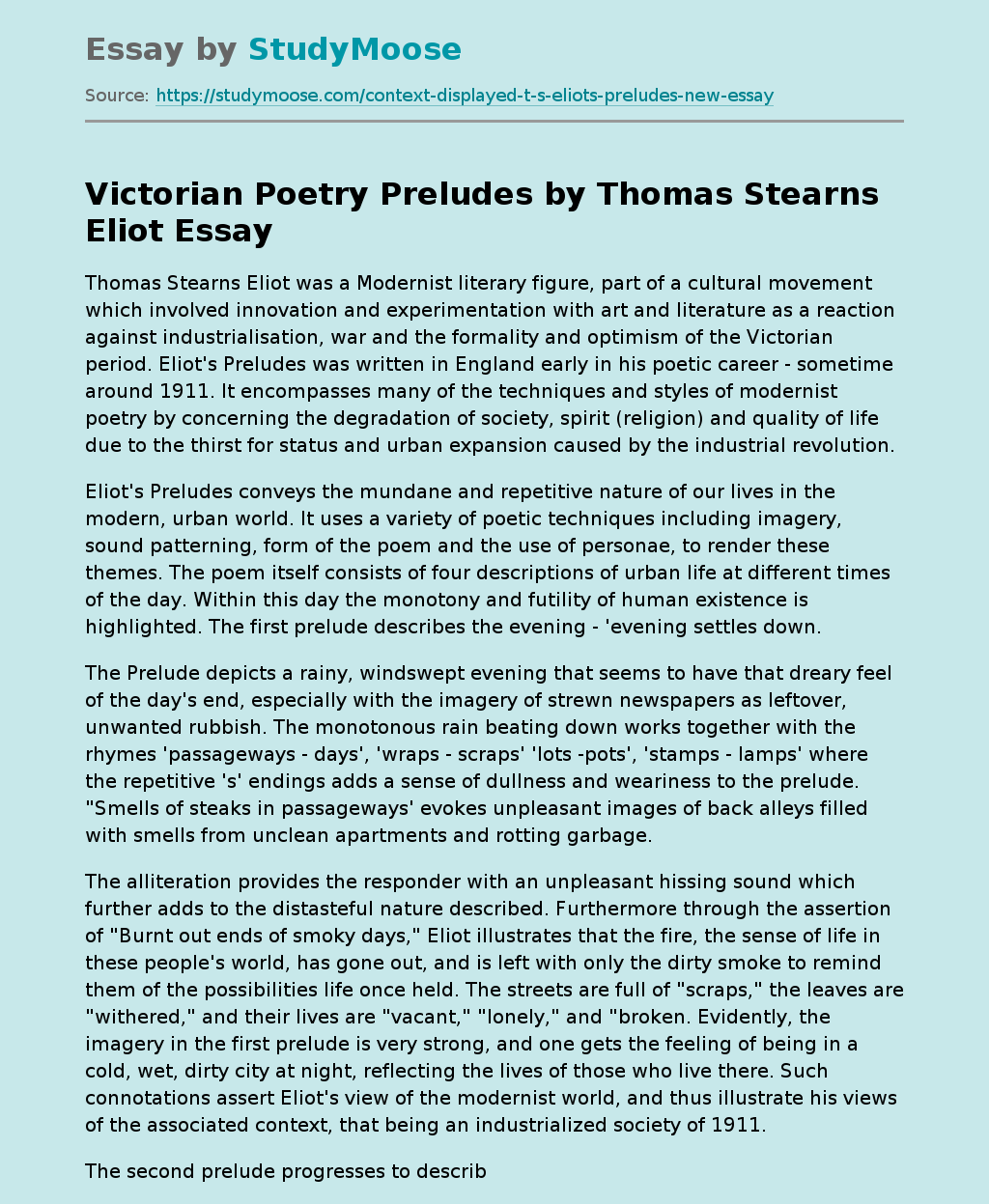