The complex nature of alienation in poem The Preludes Through

Don't use plagiarized sources. Get your custom essay on
“ The complex nature of alienation in poem The Preludes Through ”
Get custom paper
NEW! smart matching with writer

The image of “the smell of steaks in passageways”, symbolises the polluted and mundane environment that individuals are forced to endure. This effectively communicates how the modern urban landscape is doomed for misery and explains how the urban environment has become a fragmented world. The Preludes portrays the isolation that individuals experience in a harsh society. T.S Eliot describes his feeling of despair at the decline and dissolution of modern civilisation in order for the reader to understand the emptiness felt by individuals. In the poem, The Preludes, the reader can visualise how individuals in modern society are forced to go through a meaningless routine where there is a lack of humanity and moral values.

T.S Eliot’s poem The Preludes provides the reader with an image of the sordidness, futility and hopelessness in an urban landscape. T.S Eliot uses imagery throughout his poem to metaphorically explore the nature of life in urban society. T.S Eliot describes how the modern urban landscape is losing its direction and liveliness.

Descriptive images throughout the poem criticises the modern world. The decay and pollution on the streets: “On broken blinds and chimney-pots” is used as a metaphor to emphasis the loneliness and exhaustion that people in an urban environment are experiencing. T.S Eliot underscores how individuals are living harsh, meaningless lives, full of routine and boredom. The poem, The Preludes expresses society as a hopeless world where streets are lonely, shattered and exhausted. T.S Eliot confronts the reader by emphasising how individuals in modern society feel alienated and isolated as they are forced to go through a constant, meaningless routine that lacks vividness and uniqueness. The Preludes creates a sense individuals living in discomfort as they are unable to escape the emptiness, depression and despair that they feel living in a corrupt society. The stanza “The morning comes to consciousness” describes how individuals woke up not wanting to face the harsh reality of the world outside. The use of descriptive words such as “stale”, “muddy” and “dingy” evoke misery as they describe the urban environment as being filthy and disgusting.

T.S Eliot creates sordid images of the urban environment to show how individuals felt that their life was meaningless because each individual was just one of “a thousand furnished rooms”. T.S Eliot uses the term “masquerades” to depict false pretences and artificialities that individuals in an urban society engage into. Individuals are often concealing their true selves behind asks of deceit. The tone of The Preludes is scornful and sarcastic which allows the audience to understand the emptiness and isolation felt by individuals in a cruel environment. The third Prelude leads the reader into becoming more awareness of the suffering that individuals face in a harsh environment. The repetition of “you” and the shift to second person constructs the image of a shattered and desolate life. The stanza “The thousand sordid images of which your soul was constituted,” depicts how experiences in the urban landscape has haunted individuals and corrupted their souls. The woman in the third Prelude is one of many that “comes to consciousness”, each morning. The woman symbolises the insignificance of each individual in society as they are forced to continually adopt the “masquerade” and conform to expectations placed upon them.

The juxtaposition of “Sparrows in the gutter”, highlight how nature and innocent creatures are being destroyed and wasted away in the harsh, urban landscape. T.S Eliot reveals the vulnerability of individuals in society as many people are in pain and agony created by restlessness. The Preludes describes how individuals felt disconnected with their environment and others since the fragmented world has forced them to live in solitude. T.S Eliot personifies the street as “His soul stretched tight across the skies”. The “stretching” of the man’s soul suggests that individuals were being consumed by the environment. The Preludes has a recurring motif of souls being taken away which implies the corrupt nature of society. The sharpness of the statement “conscience of a blackened world” is extremely heartbreaking as it is notifies the reader about the fate of society. T.S Eliot mentions the lack of hope in society as individuals are blinded by the meaningless mechanic routine that they endure each day. Through his poem, T.S Eliot highlights how individuals are accepting the corruption and moral decay in society. By composing moods of despair and desperation throughout his poem, T.S Eliot illustrates the growing sense of alienation that has resulted from a life full of monotony and misery.

In conclusion, the poem, The Preludes, portrays the futility of human existence by depicting motifs of alienation, isolation and desolation. T.S Eliot critiques the superficiality and pretensions of the changing urban landscape. The disorderliness of the industrial city establishes the growing sense of alienation and isolation since the daily existence of individuals is synonymous with a living death. The Preludes reflects a sense of nothingness in the urban landscape, as T.S Eliot explores how modern society has depersonalised individuals as they are constantly struggling with everyday existence.

The complex nature of alienation in poem The Preludes Through. (2016, Apr 19). Retrieved from https://studymoose.com/the-complex-nature-of-alienation-in-poem-the-preludes-through-essay 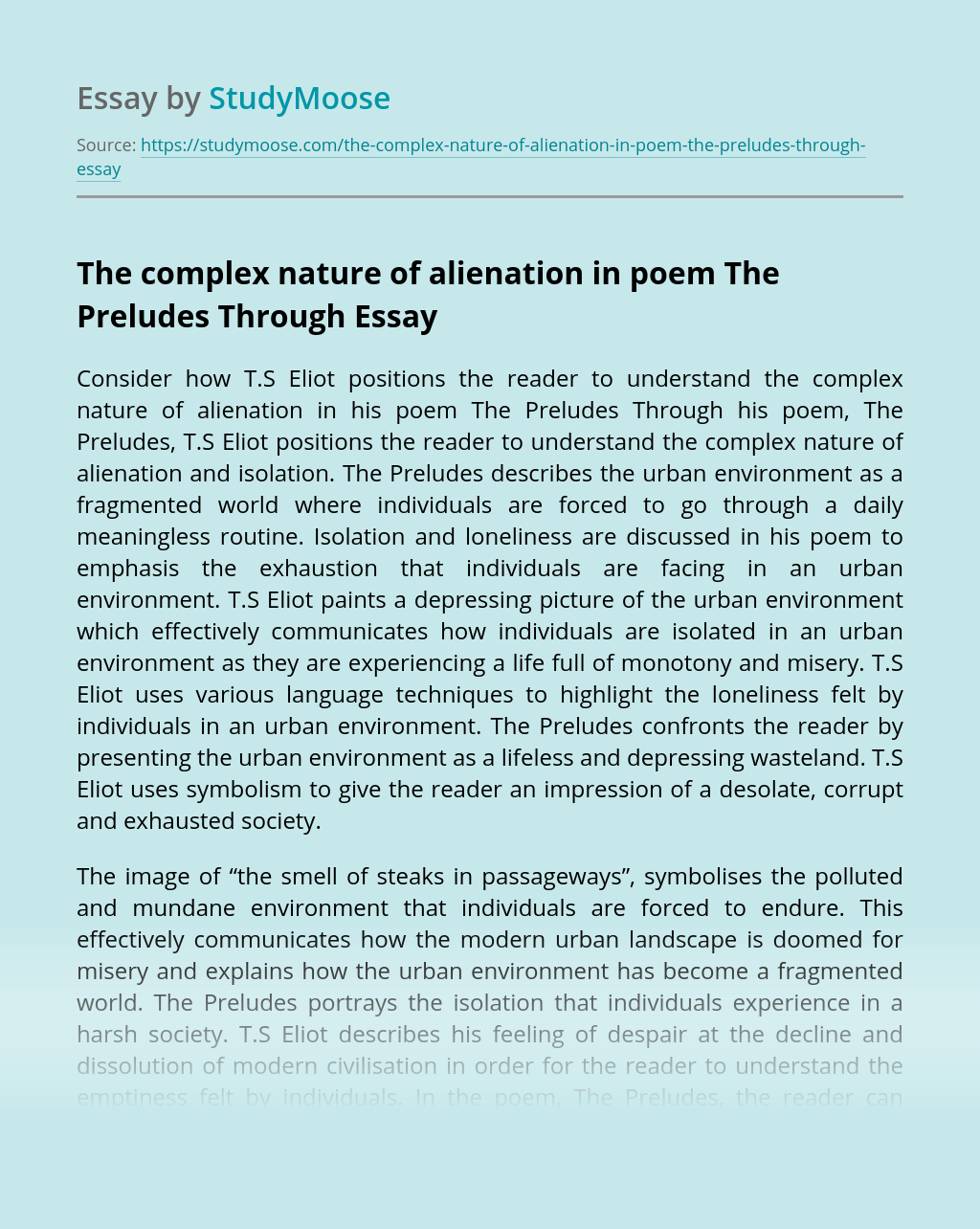