La fille aux cheveux de lin is the eighth piece in Book 1 of Debussy’s Preludes. It is a typical example of his impressionist composition style, impressionism in this case meaning a type of program music which aimed to evoke moods and impressions through tone colour and harmony. Impressionism also relies on allusion and suggestive understatement to convey its subtle meaning. La fille aux cheveux de lin is alluded to be in ternary form, with the opening theme from bars 1-3 making a reappearance in bars 28-32 with the rhythm augmented into crotchets in bar 31.

The return is not a direct repeat of the theme, but we are given enough of the original melody to be able to assume that it is a return. The way Debussy has alluded to the piece being in ternary is in itself, an “impression” of form. One of the features of Debussy’s Preludes is that the title to each work is written at the end of the piece, enabling the listener to form his own opinion to each piece before being influenced by the title Debussy chose to name it.

‘La fille aux cheveux de lin’ roughly translates to ‘The girl with the flaxen hair’, which is vague enough to allow each listener to create his own perception of the piece, while specific enough to evoke a particular mood. There are many new harmonic techniques Debussy used throughout his Impressionist works, some of which which are found in La fille aux cheveux de lin.

The opening theme, bars 1-3, is based on the pentatonic scale formed by the black keys of the piano.

All notes in the theme, save for the F in the third bar, are part of this scale. Debussy used many traditional major and minor chords in his pieces, but he used them in original, innovative ways that made them sound unfamiliar and fresh. He especially loved to use parallel movement in his chords, and an example of this is the parallel fourths found in bar 14 and bars 33-34, and the ascending parallel fourths in the right hand of bar 35.

The rhythm in this piece is very fluid, featuring gentle semiquaver movement and the use of ties to blur the sense of pulse. In bar 1 Debussy indicates the piece is to be played sans rigueur, which means ‘without rigidity’. The flexible rhythm of the melodic line of La fille aux cheveux de lin aids the listener’s understanding of the images behind the piece. Debussy has used many descriptive performance instructions in La fille aux cheveux de lin.

Achille-Claude Debussy (22 August 1862 – 25 March 1918) was a French composer who bridged the gap between the Romantic and early 20th Century styles. He was one of the pioneers of Impressionist composition. His music was a reaction against the over-emotional Romantic music of German composers. He was heavily inspired by Javanese music, and his works usually reflected his tumultuous personal life.

He experienced many failed relationships, both familial and romantic, and was often depressed and frustrated by the intellectual limitations of those around him. He began his career as a music teacher, but after winning the 1884 Prix de Rome, Debussy received a scholarship to the Academie des Beaux-Arts where he furthered his studies. Debussy’s themes are almost always fragmented and suggestive. “There will be just a whiff of melody, a tantalising suggestion of a tune, and then it will fade away into the shifting tonal colours and sinuous harmonic flow.”

He leaves much to the imagination through allusion and understatement, and exploring the subtle tone colours of the instruments he writes for. Debussy was one of the first 20th century composers to use non-traditional scales and reject conventional harmony by exploring the use of parallel chords and hinting at tonal centres rather than sticking with a definitive key. He was a truly innovative composer and his works assisted in new ideas that developed 20th century composition. 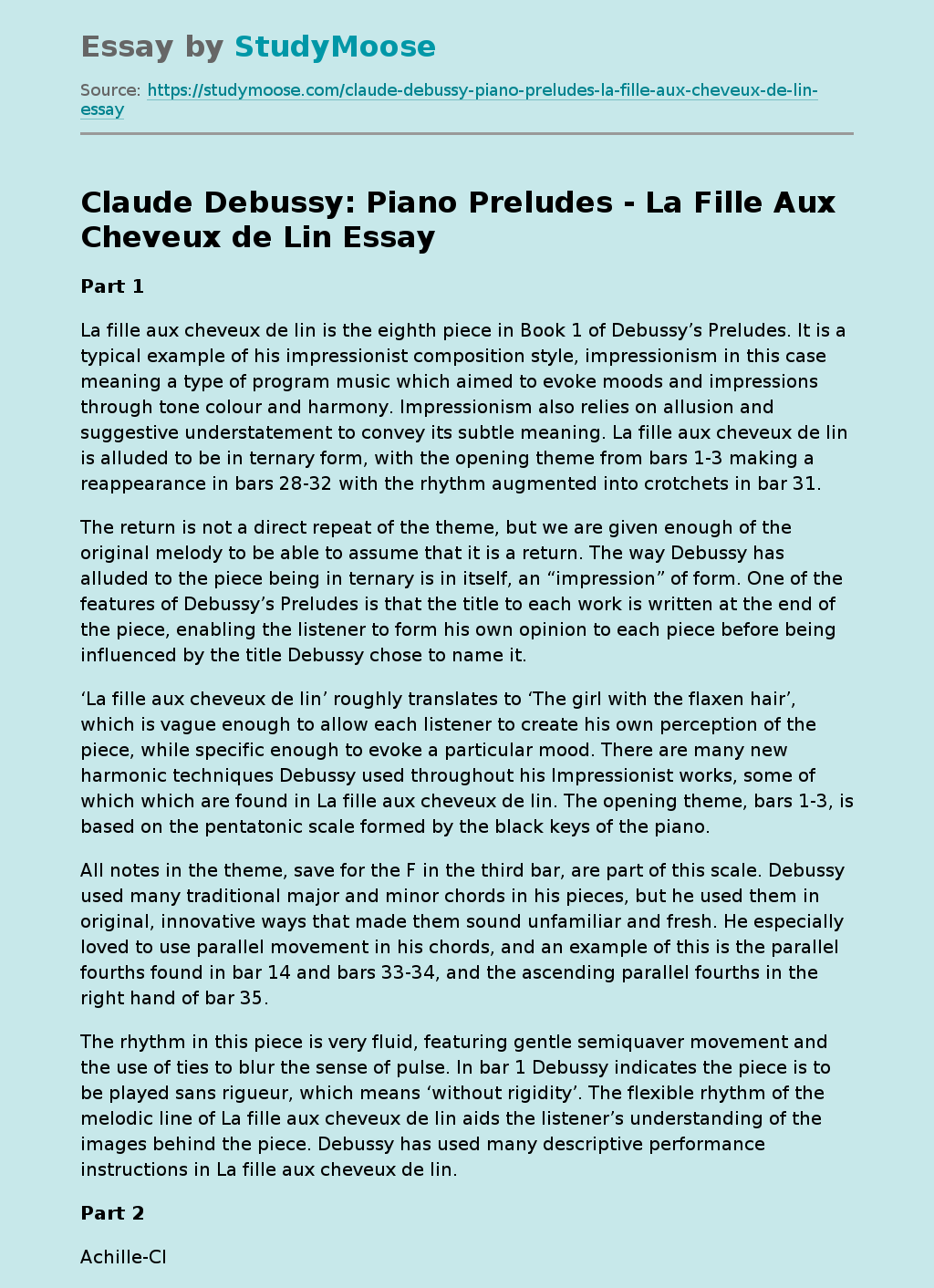