Debussy's Use of the Fibonacci Sequence in Music

Don't use plagiarized sources. Get your custom essay on
“ Debussy’s Use of the Fibonacci Sequence in Music ”
Get custom paper
NEW! smart matching with writer

It is however important to mention that as this is one of Debussy’s earlier works, the extent that the ratio and sequence are explored are not as elaborate as some of his later works.

I will explore the Harmonic analysis of the piece to create a better understanding of where and how structure is used by Debussy. Debussy was a perfectionist and would only give perfected scores to the printers, as such it is impossible to prove whether or not the use of the sequences were intended or not, however considering that some of his contemporaries in other arts were very much involved with the idea of the Golden Ratio it does seem plausible that it was intended.

The fact remains, though, that the use of the sequences and ratio are still evidently there and can be analysed; as this essay will show. The Fibonacci sequence is a system of numbers that equate to the two preceding numbers.

In terms of music it is difficult to define how this might fit into a musical sequence; in form it makes a bit more sense when associating the golden ratio. However, there is a means to obtain a musical sequence using Fibonacci’s sequence. If we consider that there are seven main tones (excluding sharps or flats) in a general scale, before any note is repeated, we are able to find a number to create an equation that relates to the Fibonacci sequence, namely 7. If we then take the first few numbers of the Fibonacci sequence; 1, 1, 2, 3, 5, 8, 13, 21, 34, 55, 89, etc. and put them into order with the numbers between, in 7 columns: 1

And so on as the lines repeat here after. If you look carefully you can notice that the rows are repeated, the middle having one change from a 5 to a 3. In relation to the score one can see this pattern appearing in segments all over the piece but the first row comes to light on the second page and is repeated in every bar:

In Db Major (the first bar) the notes that are circled are: D D E F A D B C, which in relation to the sequence represent the 1st 8 numbers: 1 1 2 3 5 1 6 7 In G Major (the second bar) the notes are: G G A B D G E F, which is the same sequence as before, only in that key. (see attached score page 2) In some of the other places that the sequence occurs it’s suggested rather than apparent as it does not fall in the main melody line but rather flows between parts and harmonies so that there is always this undertone of melodic structure. (See attached score, page 1)

According to Howat the “forms are clearly articulated to conventional terms”, yet it is still clear that some aspect of the Golden Ratio has been used as we can clearly see the use of numbers from the Fibonacci sequence: the first being 5 + 8 bars = 13 bars these are the 4th, 5th and 6th numbers of the sequence. 8 and 13 create 21 this is the next number shown and the 7th number of the sequence. 5 and 16 make 21 as 21 and 10 make 31, thus even if the numbers are not exactly the same as the Fibonacci sequence they still follow the formula where the two preceding numbers equate to the next number.

Also this sequence is repeated at the end with the return of the A section that the piece started with and on which this graph is based. Howat was not wrong in saying that the piece perhaps follows some conventions even though Debussy was against such. If we closely look at this piece we will see that it vaguely represents that of a sonata form. Firstly the Form of the piece is in ABA form, A being from bars 1 – 31, B from bars 32 – 46, A returns in bar 47 – 78. Preceding A however is a bridge like section in bars 1 – 5 and again in 47 – 54. In bars 6 – 17 there is an introduction of the material, an Exposition if you will like in that of Sonata form.

Bars 18- 23 show a slight development on the original A material. Bars 24 – 27, the sound thins out in terms of harmony and accompaniment and a new idea is introduced in another bridge like section going into section B. Bars 28 – 31 show a key change bridge extending on the previous bridge. Bars 32 – 46 shows A major as the new key and the time signature has changed as well. Although this new sections key is unrelated to the first it does show a development like section which is seen in Sonata form. Bars 47 – 54 bring back the original introduction only it’s slightly altered, before returning to in bars 55 – 78 which show the recapitulation. A Closer analysis follows.

This Nocturne shows influences from the Nocturne influences of the romantic era, the slow introduction before the main section, the contrasting middle section followed by a recap on the beginning to a climactic end. In conclusion, I would like to reinforce the concept of math in music. Music and math have always been associated not only because of the features of math in music but also because of the fact that they share the same side of the brain and music improves math skills and vice versa. The Fibonacci is a sequence that proves the Golden Ratio as a huge aspect of everything relating to math, in nature, in the human structure but also in music. The natural instinct of the human mind and ear in music is to create balance. So while bar numbers may not always make sense or have any balance according to visible numbers, it can still feel and sound balance because of the ratios used that create a balance according to the Golden Ratio. Debussy began to explore something that has not yet been explored in more depth and in this I hope to begin exploring it in much more detail in my own future.

Debussy's Use of the Fibonacci Sequence in Music. (2016, Apr 27). Retrieved from http://studymoose.com/debussys-use-of-the-fibonacci-sequence-in-music-essay 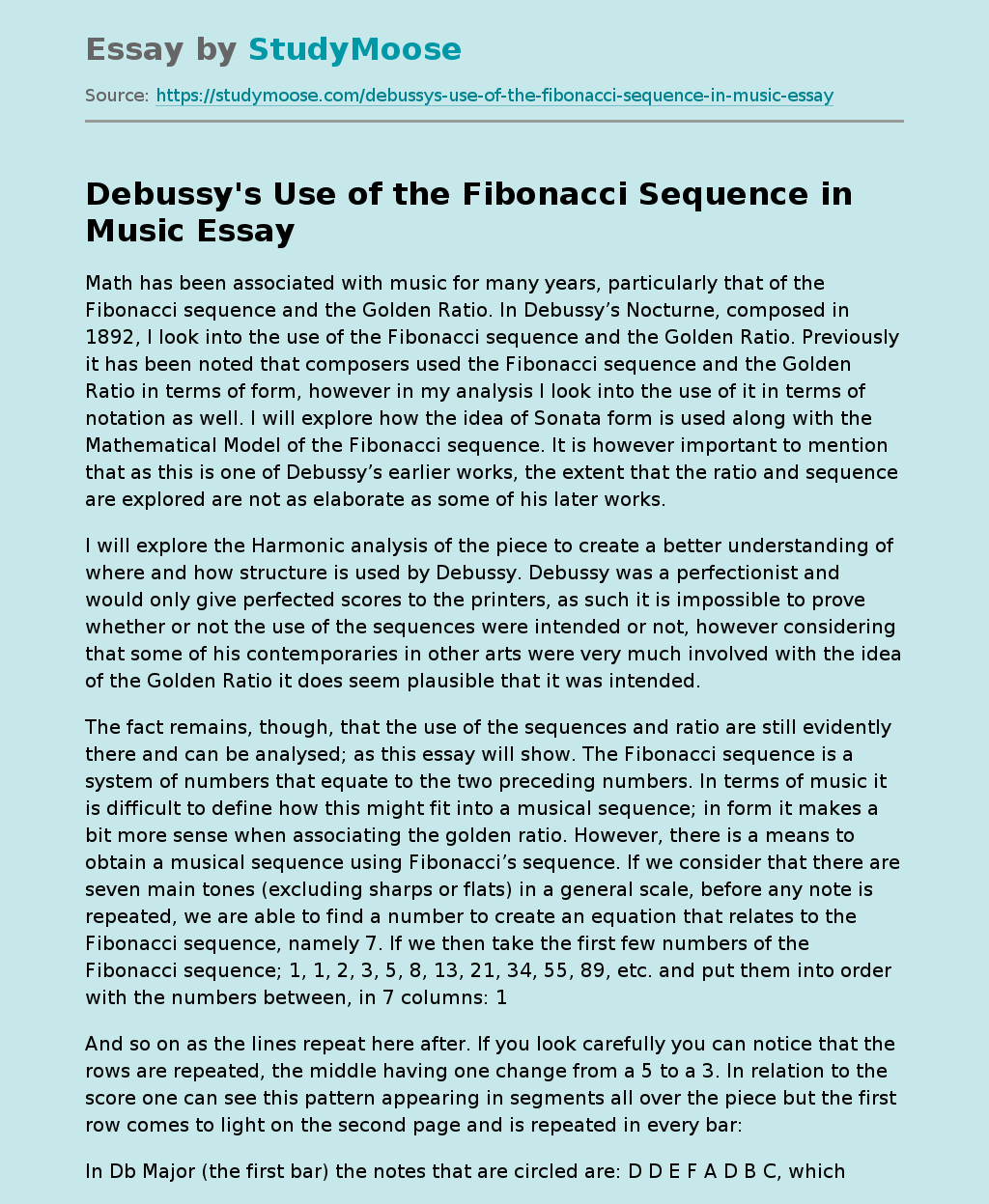