Willy Russell Create Mood and Atmosphere in the Summer Sequence

In the Summer Sequence Willy Russell’s three main protagonists are shown to grow up from the ages of 15 to 18, thus becoming adults throughout the song. This means that the sequence acts as a watershed in the respect that it marks a major turning point in the play. This is shown through the atmosphere that Russell creates, which goes from fairly positive, hopeful tone to a more cynical and desperate one over the duration of the sequence. Russell uses several techniques to create these atmospheres throughout.

Don't use plagiarized sources. Get your custom essay on
“ Willy Russell Create Mood and Atmosphere in the Summer Sequence ”
Get custom paper
NEW! smart matching with writer

In the opening of the Summer Sequence the atmosphere is clearly a happy one, which is shown by Russell by using words like “young, free and innocent” to describe the characters. In this section, the word “innocent” is used twice. This repetition emphasises their youth and their naivety. “You haven’t got a care”, suggests Russell is trying to create an image of the characters as being without concern, completely free of worry so it reinforces the absolute happiness of the characters.

Another adjective that occurs later in the song is “immortal” which at this stage of the play creates an atmosphere of excitement and spontaneity because the children can’t conceive of an end to their current lives. A technique that Russell uses starts to use here is imagery, “street’s turned to paradise”, the word “paradise” bring to mind an idea of secure and complete happiness, which is how he describes them in this verse. Another technique is personification, “radio’s singing dreams”, giving the radio the ability to do something that brings happiness or joy.

This line also works the first time the motif of dreams appears, one that recurs throughout the sequence.

The next notable part of the sequence is entirely stage directions, and shows the characters at a fairground. In this part of the sequence the most obvious technique is foreshadowing and motifs arising. In it, Linda is just ignored by the narrator, who is running the stall, when giving the gun to them, but the boys both insist Linda fires it, which is reminiscent of the beginning of the play when Linda takes the airgun from Mickey and beats him at firing at cans. Linda also used to control their social situations, “let’s throw some stones through them windows”. This scene is also very reliant on the gun motif that runs through the entire play which creates a darker and more sinister atmosphere, and that suggests a level of violence.

The fairground scene is also reflected in the musical choice, which is fairground-like music that plays to the tune of ‘Tell me it’s not true’, the song Mrs Johnstone sings at the very beginning of the play while her two sons lie dead on the stage. So, again this ties in with the audiences’ awareness of the boys’ tragic fate, thus, creating a foreshadowing atmosphere and suggests impending tragedy. This links with the gun motif, as together these themes create a sense of impending violence and death. The last line of this section of stage directions is “Linda is caught in the middle, the game freezes”. This creates a dark atmosphere as throughout the play Linda is always seen to be caught in between the two boys, but so far, it has never ended badly. In this instance, however, it foreshadows the fates of all three characters. The use of the word “game”, referring to a game of piggy-in-the-middle, could suggest that the context of the play when Linda gets caught up in her own happiness which eventually leads to the tragic fate of the twins. Overall, this section is of a darker tone than the last, but this atmosphere is created through the subtext, so the audience may not be fully aware of why they feel this way about the atmosphere. This is featured through the presence of the narrator, who throughout the play appears on stage to signify or prompt something negative to happen. He hands them the gun, and prompts the game of piggy-in-the-middle that Linda gets caught between.

The next section uses metaphors to create a dark, impending atmosphere, that is more openly sinister that the previous section. Russell refers to the characters are “Lambs in spring”, which suggests not only their innocence and naivety, but an inevitable fate, specifically one that is forced upon them, not of their own doing. This explicitly refers to the brothers’ fate in a way in which the last section didn’t, so the tone is far more marred by the eventuality of their deaths.

This date is also referenced when Russell extends the metaphor, “fate the later seasons bring”, which causes the audience to remember the scene at the very beginning of the play, preventing them from being drawn into the initial happiness of the three teenagers in this sequence. Again, it refers to Linda being caught in the middle of the pair, foreshadowing their final argument. It also refers to Linda paying a “price”, a theme that was initially shown in the song ‘Easy Terms’, sung by Mrs Johnstone, and in both cases foreshadows the price they’ll have to pay for their involvement in the twins’ lives. The music becomes far more serious and sinister, a repetitive tense note with no actual melody.

In the next section a recurring theme is shown with the references to time. This creates a sad, melancholic atmosphere, as the audience is aware of the character’s significant lack of time together, but the characters are not, so their happy unawareness and this dramatic irony is slightly poignant. Again, fate is reference by the narrator “care not for what’s at the end of the day”, again forcing the audience to remember the fate of the boys, this enhances the melancholy mood of the section. “What is to come, what might have been”, references both the eventualities of the play, whilst also suggesting they could have been happy, that it could have they could have been happier, depressing the mood even further. It is made poignant by the characters’ blissful ignorance, “life has no ending…Talk away the night”, which ties in with the earlier references of immorality.

Again, this dramatic irony, where the audience know that the boys’ lives do have endings that are fast approaching, almost makes the audience beg them to not waste their time talking “away the night”. “Share your last cigarette” also ties into the earlier scene where Mickey and Eddie share things, such as sweets and later cigarettes, they promise to share things in their blood brothers pact; but they cannot share Linda. Arguably the downfall of both brothers, meaning that this watershed’s atmosphere is wholly dark. In the next section it is all stage directions, but Russell uses foreshadowing and the use of the narrator’s presence to create a seemingly happy atmosphere that still foreshadows tragedy. In it, the trip are taking photos of each other at the beach. In the one between Eddie and Linda, Eddie down on one knee and demonstrating affections by kissing her hand. Throughout the play, Linda has shaped Eddie’s personality and actions, such as coercing him to throw rocks, and Eddie has appeared to like her from the very beginning and so this foreshadows the dynamics of their later relationship.

Mickey and Linda’s photo does the same, as Mickey “pulls a distorted face”, and Linda chastening him for it, which foreshadows Mickey’s later dependency on medication, and Linda’s efforts to help him get off them. This foreshadowing of tragic events, in a way that appears innocent creates an eerie, disconcerting atmosphere. As there are no words, it can’t openly reference what’s to come, but uses what the characters think is a harmless and happy moment. This is compounded by the musical choice, which is again ‘Tell me it’s not true’, as fairground music. Again, this foreshadows the final scene, creating a foreboding atmosphere without explicit reference as to why it appears that way. In this scene we see the characters taking pictures of them at the beach, these photos are memories of the last time the three of them are all truly happy. Therefore, the photographs signify the end of their childhood and innocence and dreams. This made clearer by the narrator being the one to take the photographs, thus being the one who signifies the end of their childhoods and lives.

The children literally become adults at the end of the beach scene in the Summer Sequence, as well as metaphorically. Because the narrator is a sinister figure throughout the play, and usually is there to prompt the occurrence of something tragic, it creates a sense of impending tragedy even more obvious in this scene. The picture that the narrator takes is of them all together, happy, so he not only brings their childhood to a close, but also their happiness and friendship. In a sense, he symbolises reality as he intrudes on their happiness, despite their ignorance and the audience’s desire for him not to do so. He also represents society as it is eventually social constraints of class and wealth that divide the two. This way the audience are forced to see the society that they are part of and this is the factor that brings the story to an end.

The fact that he appears to them as a friendly, even helpful, face increases the audience’s wariness of him and therefore the sinister nature of the scene. The overriding atmosphere of the scene is the last section is one of desperation and uncertainty. Russell uses metaphors such as “broken bottles in the sand” to symbolise a man-made impression on something naïve and happy, which symbolises the characters’ friendship and how it is affected by class. The motif of a dream is repeated, as is the theme of innocence. The references to dreams ties in with the song tell me it’s not true, which refers to dreams. The reference to innocence here again makes the trio seem devious to the fact that they will be subject to tragedy. 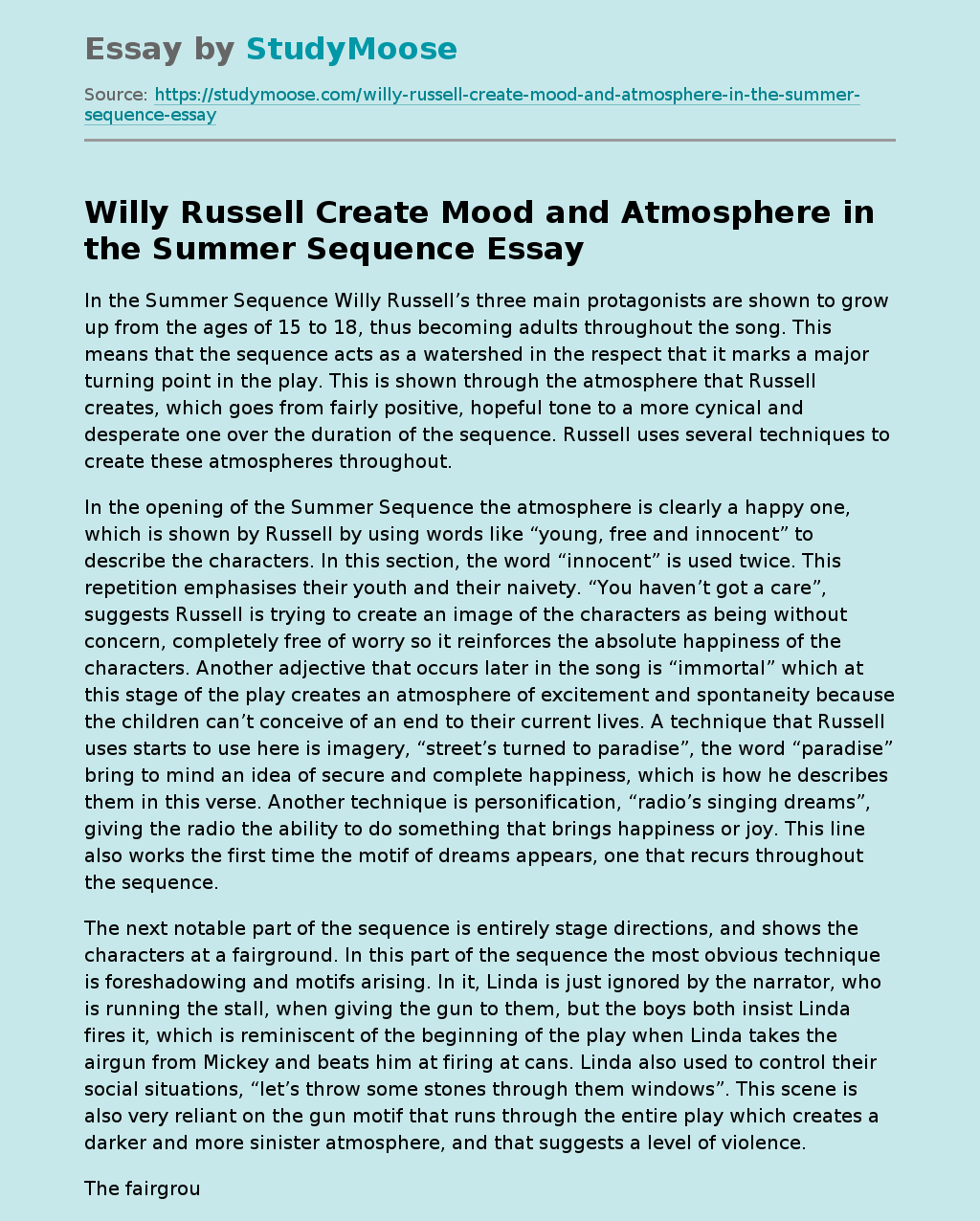