America has forever been the land of opportunities where anyone can achieve prosperity no matter their social class. Since its birth as a nation following the War of Independence, the American Dream has stood as a pillar of American values; freedom, democracy and equal opportunity. The play, Alexander Hamilton by Lin-Manuel Miranda, exemplifies the American Dream through the exploits of one of its own founding fathers. Hamilton, himself, came to America as a poor immigrant with no social rank, little education and even less money.

Don't use plagiarized sources. Get your custom essay on
“ Alexander Hamilton by Lin-Manuel Miranda ”
Get custom paper
NEW! smart matching with writer

Yet, it is his triumph against all odds, his story of remarkable perseverance and relentless vision that speaks to all Americans. Alexander Hamilton is not only a founding father of America, but in fact his story is America. It is through Hamilton’s determination, persistence, and boldness that he ultimately achieves success.

Hamilton exemplifies the American belief that no matter what your socio-economic background, a person can achieve success with hard work and determination.

For instance in the song “Alexander Hamilton”, Hamilton “got a lot farther by working a lot harder, by being a lot smarter”. He started to work for his mother’s landlord while also studying and planning for the future so he could rise up. Even though he is born into an impoverished family and eventually orphaned, Hamilton works hard to make ends meet and eventually makes his way to New York in search of a better future. Another example of determination is found in the song “Aaron Burr, Sir”. When Hamilton is talking to Aaron Burr, he “wanted to do what [Aaron Burr] did, graduate in two, then join the revolution”.

Hamilton is determined to finish school just as fast as Aaron Burr did. Again, in “My Shot”, Hamilton shows that he is “Tryin’ to reach my goal my power of speech” and promises, “there will be a revolution in this century”. He is fixated on the fact that he wanted to change America for the better. Burr gives Hamilton the advice to “Talk less [and] smile more” but Hamilton shows his determination to speak his mind and stand up for what is right.

Although determination is a major piece of the theme, perseverance is also a crucial part. When Hamilton was young, his mother passed away but he kept on going and lived with his cousin. When his cousin passed away, he “Left him with nothin’ but ruined pride” but “A voice saying “[Alexander] you gotta fend for yourself”” which gave him motivation and to move one . Another example of perseverance is when Hamilton is proposing his financial plan and Jefferson is trying to prove how “this financial plan is an outrageous demand” during “Cabinet Battle #1” but this did not stop Hamilton from giving up. He gave up spending time with his family to get this plan through. For six months, the debate raged on but soon Jefferson and Madison compromised and the plan became a huge success. Another instance of perseverance is the Hamilton- Reynolds affair. When Madison and Jefferson found out the affair and accused Hamilton of “engaging in speculation”, they told Hamilton that ” [they] could see the headline, your career is done”, and “Ya best g’wan run back where ya come from”. Hamilton did not decide to give up after this incident, instead he wrote “the Reynolds Pamphlet” exposing himself to the public. Although he publicly humiliated himself, he proved that he didn’t break the law and kept his position in the government.

Hamilton also took a very big risk when he published the Reynolds Pamphlet. Although he “was honest with [the government’s] money” and cleared his name, he couldn’t be the president anymore and he ruined the relationship he had with Eliza. Angelica decides to stand on her sister’s side and Eliza was heartbroken saying that “[Hamilton] forfeit all right to [her] heart”. Hamilton continued to be a part of the government but this time without the risk of people spreading rumors about him. Another example of risk-taking is during the war in Yorktown. Hamilton asks his army to “take the bullets out your gun” so that “[they couldn’t] let a stray gunshot give [them] away”. There could’ve been British armies scattered anywhere and by taking out the bullets out of the gun, there is not way to defend against them. But Hamilton took the risk and made sure that there couldn’t been anyway of the British finding out that they were attacking. This led to the victory of the war of Yorktown, which ended the Revolutionary War.

Humans are products of their environments, in other words, their lives depend on external factors that they cannot control such as environment, religion, and nationality. Alexander Hamilton is an example of a person who could overcome all external factors that would defeat a normal person. Of the many traits that Hamilton possessed, boldness, persistence and determination were what he came to be. Although the whole play is surrounding Hamilton, Lin-Manuel Miranda also showed similar characteristics by the choices he had made during the making of Hamilton. He started writing in the first place because he wanted to work in theater and as a Latino, the available roles were limited. Therefore the cast of Hamilton is made up of almost all non-white actors and actresses. The musical exemplifies the importance of racial representation for people of color who often find themselves excluded from historical narratives. Miranda also decided to utilize hip-hop to help younger audiences engage in the story of Hamilton. Hip-hop is not a conventional choice of music when making a Broadway show, but it proved to audiences who may be unfamiliar with the genre how hip hop can fuse American history with current politics. 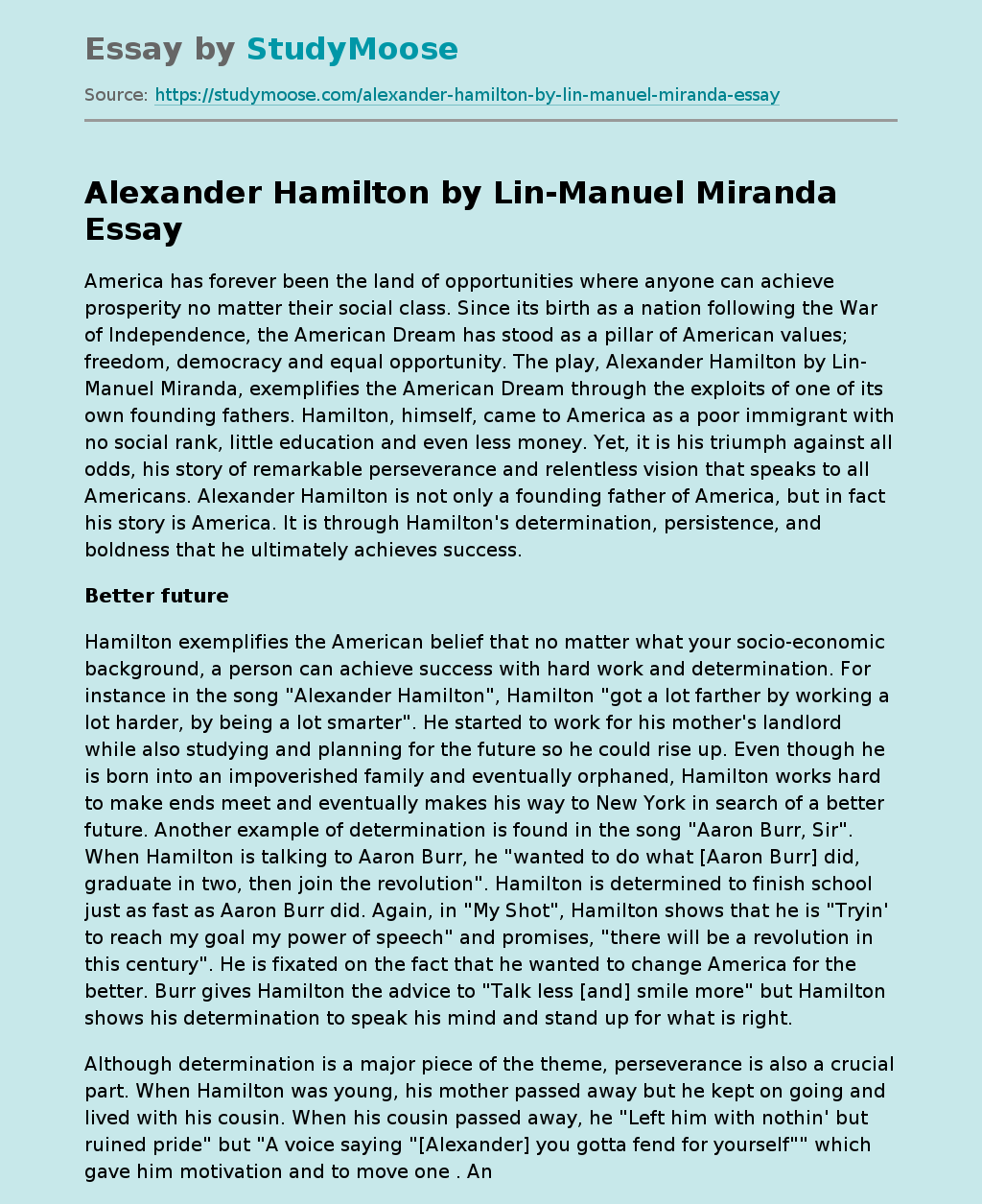