He was born in Barrio Naguilian in Bauang, La Union on June 17, 1911. He was the fourth child of Crisanto Arguilla and Margarita Estabillo, hard-working farmer folk who owned a small piece of land. Aside from being a farmer, his father was also a carpenter; his mother, on the other hand, was an occasional potter.

When he was seven years old, he enrolled in a school in the neighbouring Barrio Calumbaya, where he was taught the cartilla by Alfredo Abuan.

Don't use plagiarized sources. Get your custom essay on
“ Rice by Manuel E. Arguilla ”
Get custom paper
NEW! smart matching with writer

Later, he transferred to the public elementary school in Bauang, La Union and graduated in 1926.

Arguilla was a brilliant and active student. Aside from excelling in academics at the provincial high school in San Fernando, he edited as well the school’s official organ, the La Union Tab. A wide reader, he won in a vocabulary contest held in the school. He was a champion swimmer and an expert tango dancer, constantly winning in dance contests. He was known to have a “therapeutic” personality and was well-loved by everyone he knew; for he liked to listen to people tell him their stories.

Anything that interested him became an almost intrinsic part of him. It took him only three years to complete his secondary education, graduating as class salutatorian in high school.

In 1926, he entered the University of the Philippines. While studying, he worked as a writer and printing assistant at the Carmelo and Bauermann office. He became a member of the UP Writers Club, and eventually led it in the school year 1932-1933.

He also came to edit the Literary Apprentice. In 1933, he obtained the degree of Bachelor of Science in education. During the same period, he married Lydia Villanueva, another aspiring writer.

After graduating, he taught at the University of Manila while working at the Bureau of Public Welfare. The Arguillas’ home along M.H. Del Pilar in Manila became a sanctuary for friends and fellow writers, such as Estrella Alfon, Jose Garcia Villa, N.V.M. Gonzales and A.V.H. Hartendorp.

Arguilla did not remain a teacher for long for he believed that writers were born, not made, and that a talent for writing was an innate attribute that could never be taught or acquired. Before leaving his students, he counselled them to just read volumes of stories.

In 1940, he became the managing editor of the Bureau of Welfare newsletter, the Welfare Advocate. He worked at the Bureau for three years until the latter half of 1943. By then, the country had been under Japanese occupation for two years. He was appointed to the Board of Censors and was asked to serve in the Japanese propaganda agency. But Arguilla had also just become an agent of the Markings Guerillas. Thus, while apparently working for the Japanese, he was actually heading the “Porch,” the Markings’ counter-intelligence and propaganda unit operating in Manila.

It was not long before the enemy discovered his guerrilla activities, and subsequently, had him arrested in February 1944. Along with his mother and a few relatives, he was incarcerated to Fort Santiago. His wife was initially unaware of his arrest but later, was able to evade the dragnet. After two months, Arguilla’s mother and relatives were released, while he was transferred to the Old Bilibid Prisons. Later, after being tortured and subjected to a sham trial, he was brought back to Fort Santiago for execution.

Arguilla the writer often portrayed the life of the ordinary Filipino, usually the rural Ilocano, in his more than 50 short stories that have permanently enriched Philippine Literature. The critic Leopoldo Y. Yabes cited him as “the best craftsman among Filipino fictionists in English, (whose voice) is the only really authentic voice. He is shamelessly Filipino.” His stories are still considered unrivalled in his depiction of the life of the Ilocano farmer.

In the prime of his life, Arguilla died a hero’s death. Yet he would not be forgotten. On June 12, 1972, Arguilla was honoured with a posthumous award, the republic Cultural Heritage Award. He was cited for producing literary works that have “continued to influence Filipino fiction writing… and literary scholarship.” In his honour, a marker was installed in his hometown on August 25, 1983.

An afternoon on a hut with a tamarind tree beside it, Pablo, an old farmer, came from the farm and unhitched his carabao upon its empty sled and began to feed it with a grass. Then, he called her wife, Sebia, from their hut but no one answers him. He goes to the neighbourhood to ask if they’ve seen Sebia and his children but Osiang, their neighbour, seems not hearing what Mang Pablo is asking and give a question back regarding his husband Andres. Later sometime Osing told Mang Pablo that his wife and three children went to the creek for some snails.

Mang Pablo reminisce the scenario later that morning when he with the several other tenants driven with their sleds to the house of the senora to borrow some grains. But as they go changes come, their usual tersiohan system on borrowing became takipan meaning the amount that they borrow becomes double at harvest time. His co-tenants refuse for this is too much and can’t even know if they can pay it exactly at the time given. In the end everyone leave with an empty sled and will come home without any rice to eat.

Then, Osiang’s voice broke the silence. Asking if he had already cooked their rice and offered him pieces of coal. When he is about to go back home Andres came and give a sign telling he must wait for him. Andres – dark, broad and squat man, wearing a printed camisa de chino appeared asking Mang Pablo if he is coming with them. Mang Pablo advice he not to continue this because they will commit stealing but Andres together with other men is desperate. 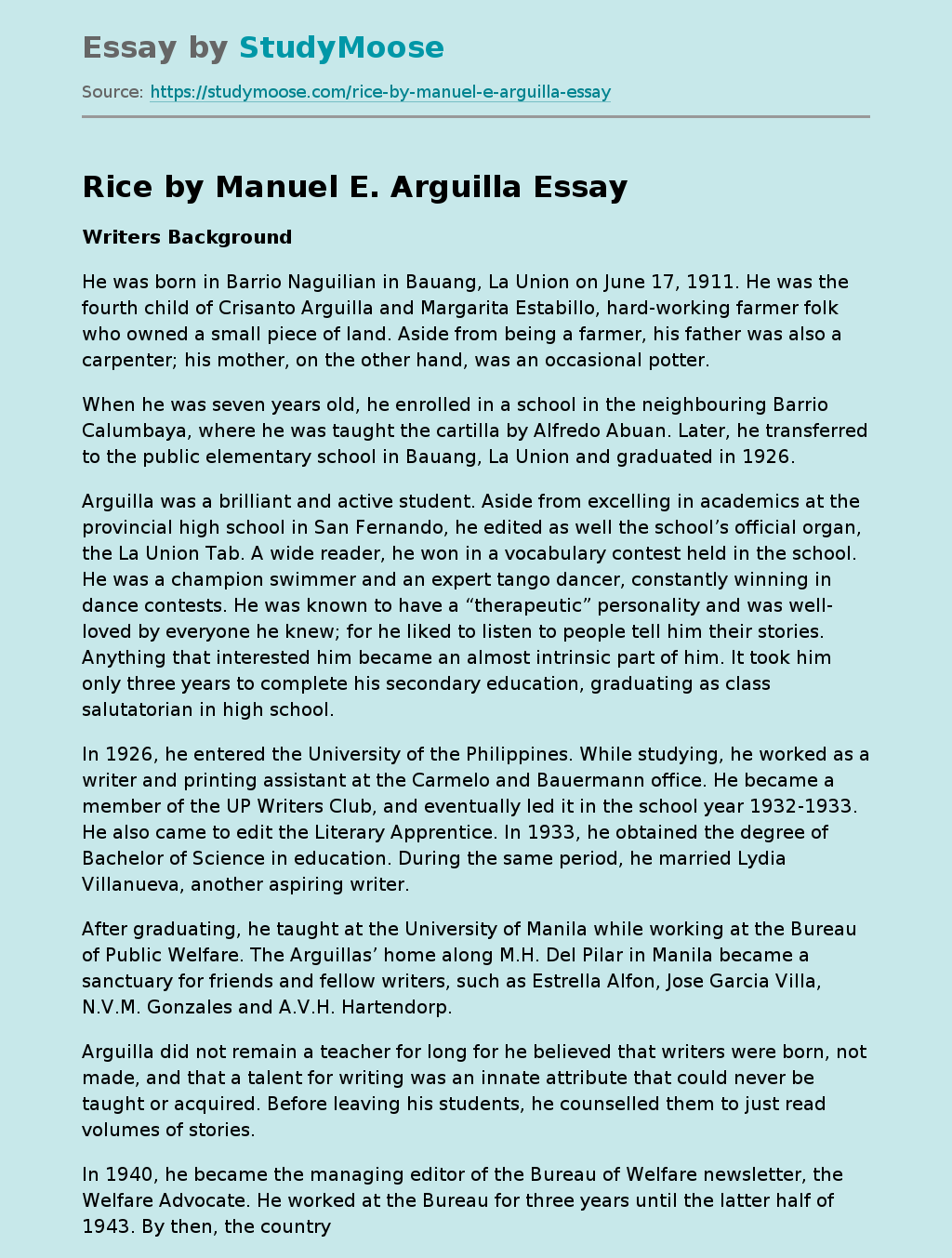