Rice farmers’ socioeconomic status better when they venture into other businesses. The economic and social status of Filipino rice farmers and their families has steadily improved during the last decade, not because they depended on rice, but because they ventured into other activities that supplemented their income from rice. This was shown by a study conducted by the Socioeconomics Division of the Philippine Rice Research Institute (PhilRice). The study group, led by Divina Gracia Vergara, focused on trends transpiring in rice-based farm households and rice lands, and among farmer operators in 33 provinces for the last 10 years.

“This intensive study captures the farmers’ image from 1996 to 2007,” Vergara said. The study shows that the rice-based farm household income is increasing, as gross household income went up from P68,974.85 in 1996-97 to P127,799.95 in 2006-07. The finding is also consistent with the result showing that almost 60 percent of the households are above poverty level (57 percent) in the 2006-07 period. Furthermore, the share of nonfarming activities as a source of income had steadily been increasing, as the study found that rice and rice-based farmers are now engaged in other businesses, such as rubber production, wood craft, welding and work overseas.

“This finding implies an important question. The question in the long run will be about the presence of household members who are willing to pursue rice farming in the future or dependence of rice-farm households on hired labor for the management of their farms,” Vergara said. Aside from improving the status of rice-based households and increasing their income, Vergara also learned that the number of farmers owning rice land had been increasing by 10 percent for the last 10 years. Moreover, there is also an increase in farmers’ yields regardless of season from 3.30 ton per hectare (t/ha) to 3.72 t/ha during the wet season, and 3.37 t/ha to 3.94 t/ha during the dry season. Across three survey rounds, most villages are located in irrigated areas, and results show that irrigation is expanding from 60 percent to 66 percent.

The current trend revealed by the study also suggests that highly educated persons are venturing into rice farming, although the majority is modestly educated or with elementary education only. There is a 2-percent increase in the number of farmers with at least a college education venturing into rice farming. In terms of organizing farmers, however, results show that more than 50 percent of the respondents are not affiliated with rice or rice-based organizations. Most of them have not also undergone training since 2004. Noting that half of the farmer-respondents have been farming for 20 years, Vergara also said farmers’ households are benefiting from the technologies and services that are being provided by the government. Despite the interventions, however, average yields gained during the dry and wet seasons are still below the experimental and on-farm trial yields of 7-9 t/ha. Gaining insight from the study, Vergara and her coauthors recommended that training should be sustained to continuously update farmers’ skills and knowledge. She also stressed the need for the government to encourage farmers to form or join organizations as through organization, farmers can pool resources and have easier access to government incentives. She also suggested the expansion of irrigation areas, as this creates “a more favorable environment for rice farming in particular and agriculture in general.” To attract more people to be involved in rice production, Vergara proposed that technologies lessening the drudgery of rice farming should continually be developed. “It is important that the government continue to monitor the rice-based farm household to determine or approximate the impact of their interventions. This will also give them enough knowledge on the direction of the policies that they would formulate to improve the countryside,” Vergara said. 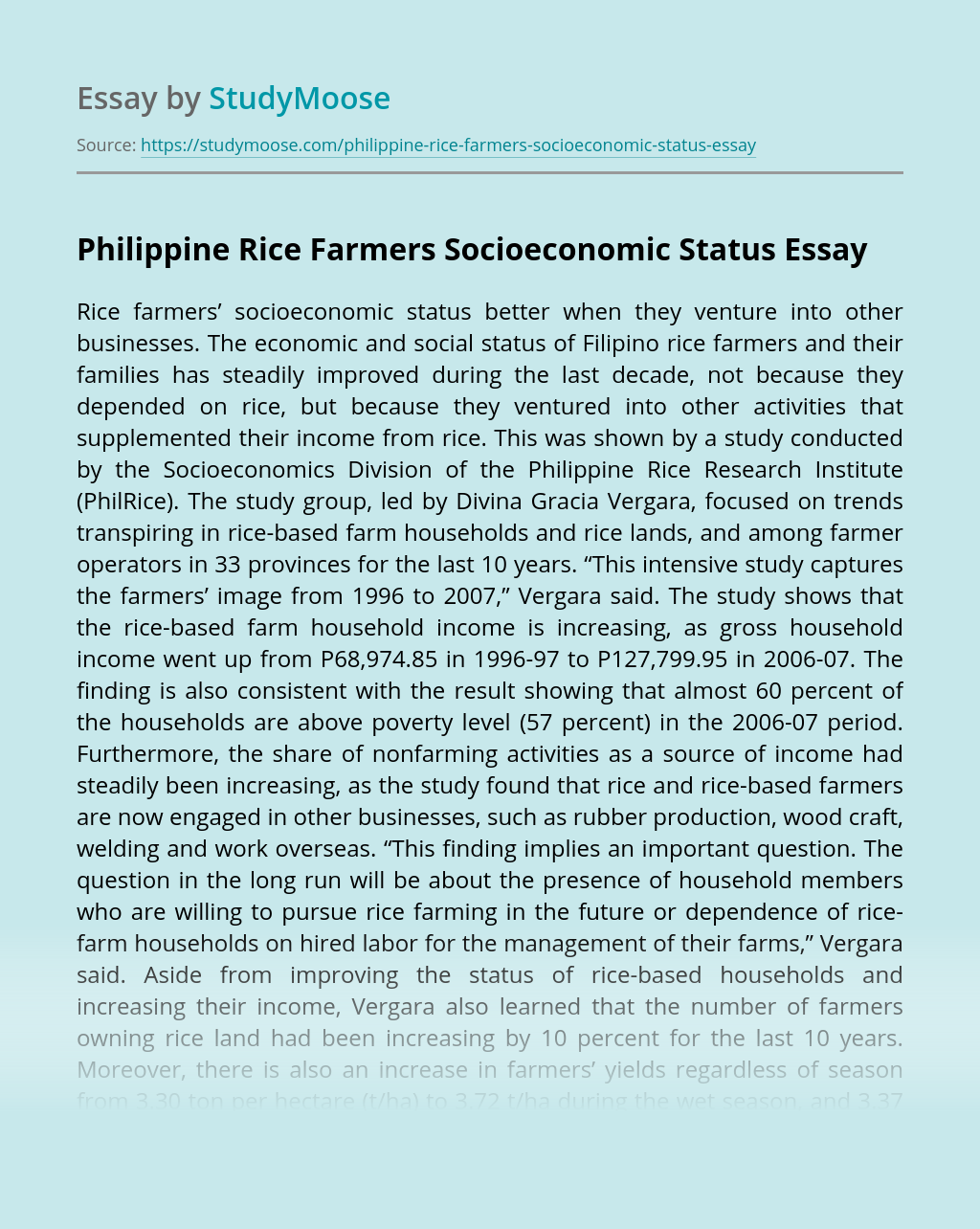