An Analysis on the Socioeconomic Status of Society

In 2012, Tom Hooper, who was widely known for directing historical dramas and periods, directed the famous French novel by Victor Hugo ‘Les Miserables’ together with William Nicholson, Alain Boublil, Claude-Michel Sch?nberg and Herbert Kretzmer re-created the previously well-known adaption of the novel, a theatrical play, into a movie. The movie premiered in December 25, 2012 in the USA and made a stunning $28,027,000 on its opening weekend and $422 million at the worldwide box office (IMDb).

Don't use plagiarized sources. Get your custom essay on
“ An Analysis on the Socioeconomic Status of Society ”
Get custom paper
NEW! smart matching with writer

Thanks to their efforts the film was nominated for eight Academy Awards, was named one of the year’s top 10 best films by the American Film Institute with an AFI awards as well as won three Golden Globe Awards.

The movie is set in 1815 just before the Victorian period starts Jean Valjean or known as prisoner 24601 has just been release but is to remain on parole.

For days he sets out to find some place to work to earn his keep and a place to rest but people are not so welcoming to a man with a criminal record. He wanders on the streets until he is found by a Bishop who takes him in and feeds him. During his stay in the monastery something life changing happens to him, he desired to change for the better but could not due to being on parole therefore with a firm will he decides to break his parole and become a new man, to start anew somewhere and live a life of virtue.

Few years have passed and he is now a mayor of a prospering town and owns a factory in which Fantine works in.

Unbeknownst to him, Fantine is thrown out of the factory and with no income to pay for her daughter’s stay at the Th?nardier’s Inn she desperately looks for money. She went to the dark side of town as is persuaded by a man to sell her body instead for a quick and easy way to earn money. She is later found by Jean Valjean who found out she was sick and took her to the hospital. Not so long after she passed away with Valjean at her side but before her passing she had told him everything about her. Now Valjean was now a man with a mission, to save Fantine’s child, Cosette, but before he could do anything Javert finds out he is prisoner 24601 who had broken his parole, the man he had been chasing for years.

He is found by Javert at the hospital where Fantine lies breathless but makes a successful escape. He then arrives at the Th?nardier’s where he saw the child Cosette being treated as a burden and was made to work despite her mother sending them funds to take care of her. Valjean offers to pay the debts of Cosette and Fantine but the Th?nardier’s drive a hard bargain, but sooner enough they give in and let Cosette go. A few years pass and Valjean and Cosette still continues to be in hiding from the relentless pursuit of Javert and his men. Word goes around that the most influential person in France, General Lamarque, is ill and is about to pass.

Revolutionist who wish to change the way the government treats its people see this as a chance to make the people rise up and fight for their rights. During the commotion with General Lamarque’s news of his near passing Marius, one of the revolutionist, catches a glimpse of Cosette and immediately falls in love at first sight. Marius asks Eponine, who unbeknownst to Marius, also has feelings for him, to find out where Cosette lives and to tell no one about it, thus begins their tragic love triangle. Valjean finds about Marius’ feelings for Cosette and that he is a revolutionist that is going to be fighting against the government and may die anytime.

He steels himself and leaves to find Marius and to protect him from harm. When he arrived at the barricade he finds Javert captured by the revolutionists, he then asks them to let him deal with him. In secret he spares Javerts life and lets him go convincing Javert that he is a changed man whom he previously believed that people like him can never change. Bewildered by Valjean’s decision, he felt like his duty weighed upon him for the first time and his sense of justice was wrong. Now Marius and Cosette are united and once again peace was brought to France.

The movie depicts a dystopic society from the perspective of the main protagonist, Jean Valjean. As stated by Patac, the movie mirrors society where there is a class between the rich and poor, the free and the captive, the one with authority and the ordinary ones It is shown in the movie how he is oppressed even after he was released, like when he was looking for work or a place to stay, people denied him for his records. This goes to show how hard it is to come back to society once you have done something wrong even as little as stealing a loaf of bread to keep on living.

As stated by Barrago, the movie starts with prisoners complaining for their unjust jail time showing how cruel the justice system is during these times. It is also shown how child labor is morally accepted in society, as seen in the film, Cosette as a child is exploited by the Th?nardier’s saying that she owes them a huge amount of debt for taking care of her while her mother is away. She is forced to work without pay to be able to keep on living. During the time skip we see almost hundreds of beggars singing “look down, and see the beggars at your feet. Look down and show some mercy if you can. Look down and see the sweepings of the street. Look down, look down upon your fellow men” asking for scraps from the elites and noble who dine in luxury buffets while the ordinary people starve.

The line “Look down and see the sweepings of the street. Look down, look down upon your fellow men” also emphasizes that the elites class does not see them as fellow humans but rather only trash or lazy people who do nothing but beg all day, this goes to show how the government doesn’t care if these people starve to death and how they are greatly looked down upon. The people wished for change but they know their voices would not be heard unless they did something that would shake the government.

They took to chance the death of General Lamarque as a catalyst for a revolution but they ultimately failed and their uprising was only seen as a rebellion by the higher ups. Even after seeing people sacrifice themselves to what they believe is right, ending children’s futures and the hunger of the masses, they still turn a blind eye. According to Patac the movie presents itself like a montage, it doesn’t focus on one character but many to form a story as how one would depict the lives of the lower and working class of society.

Overall the film ‘Les Miserables’ was an astounding re-creation of the theatrical play. The cinematography, the lights, the sound effects and the mood of each scene is delivered excellently. It effectively showed how the rich will turn a blind eye if it does not benefit them in any way and that the lower class oppressed, forced to work and do the biding of those with higher authority. With all the evidences shown, the people are oppressed by those in power and they suffer and will continue to suffer if nothing is done about it. It is clear as day that it would hell to live in if you belonged to the lower class. The film may be fictitious but its message can still be seen in our world today and will make you think, will there be a perfect society where everyone can be happy?

An Analysis on the Socioeconomic Status of Society. (2019, Nov 29). Retrieved from https://studymoose.com/an-analysis-on-the-socioeconomic-status-of-society-essay 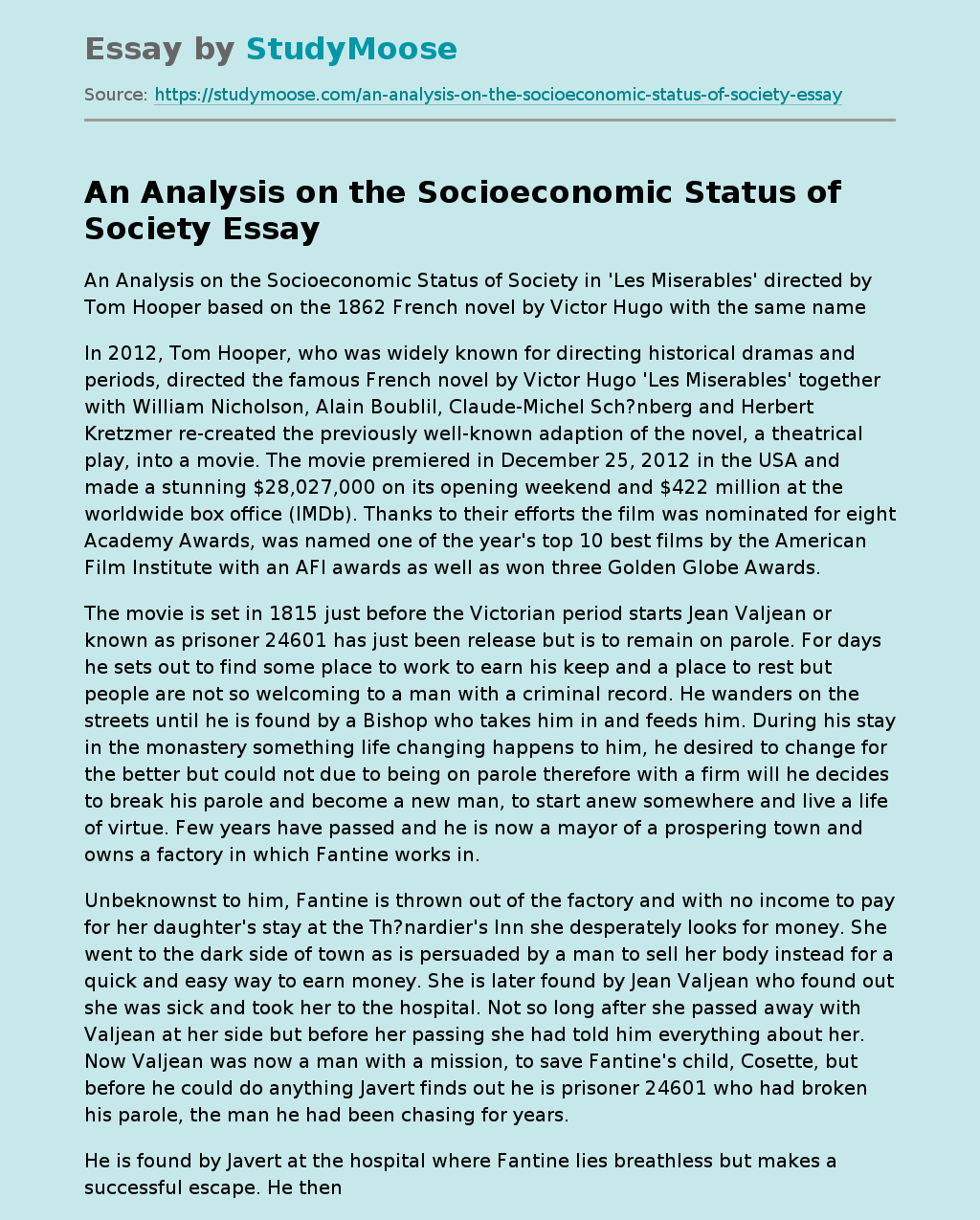