A person’s education is closely linked to their life chances, income and wellbeing (Battle and Lewis 2002). In a world that is continuously changing, access to postsecondary education plays an important role into where and how we find a career and where we want to end up. I know that higher education has put me in a position to do things that I never would have thought I could or would ever do. The United States has millions of people enrolled in colleges and universities and is the world leader in providing a college education to its people.

Don't use plagiarized sources. Get your custom essay on
“ Socioeconomic Status and Education ”
Get custom paper
NEW! smart matching with writer

The United States also enrolls more students from abroad than any other. This is a very large number and we really want as a nation to be a leader in education. When we lead the world with the highest proportion of college graduates, the United States finds itself thriving with an abundance of growth in all areas. Community colleges offer a number of specific benefits.

Affordability and location are very large reasons as to why community colleges like Delta College are playing a very significant role in the lives of thousands of people.

Socioeconomic status (SES), family size, and parental involvement will all influence the amount of resources available to an individual. As SES increases access to higher education will also increase. Higher education in America can put you a step ahead of others as Walters notes. “Higher Education in America has become increasingly stratified, with some institutions enrolling large numbers of students from low-income families.

Because education is so central to upward mobility, it is important for researchers, policy makers, and the public to keep a close eye on this trend” (Walters, 2006). I think we need to really need to concentrate on this, even as students, we can do this and make other students more aware of the importance of education no matter what the student’s background or socioeconomic status. According to Education Department data, students with parents without any education beyond high school account for about 36 percent of all enrollment at postsecondary institutions, with most being concentrated at less competitive four year colleges, two year colleges, and proprietary institutions (Schmidt, 2010).

This is specifically important because I feel there needs to be a shift in the students and staff thinking at all postsecondary educational institutions. Too many students believe that education means nothing and they just go through the motions, this is a problem because these students find themselves not completing classes, dropping out and ultimately never finishing college and earning a credential. They do not realize the importance of education. By 2020, President Obama has said he wants the United States to have a higher proportion of students with college credentials than any other nation. But the nation cannot get to that point unless many more people from modest means enter and complete college (Schmidt, 2010). This is an initiative that Phi Theta Kappa, a two year international honors society for two year colleges, is a part of and it is called the Community College Completion Corps.

I believe firmly that if the United States wants to be the leading nation in the world with prepared college graduates we need to enable and empower more students with lower socioeconomic backgrounds to be able to attend a postsecondary school. There are many areas that can be linked to academic performance including; student role performance (SRP) factors, school factors, family factors and peer factors. Student role performance is how well an individual fulfills the role of a student in an educational setting. Sex, race, school effort, extra-curricular activities, deviance and disabilities are all-important sociological influences on SRP and have been shown to affect access to education (Crosnoe, Johnson & Elder 2004). The affect that sex has on a student’s academic achievement has been debated and heavily researched over the past several decades (Chambers & Schreiber 2004). Past research shows that there was an achievement gap between the sexes, with males ahead of females. In recent years, females have narrowed the gap and in some instances, I think more than we know.

Females are now showing a higher academic achievement. For example, girls have been found to exert more effort at school, leading to better school performance. Other studies show that girls perform better in reading than their male counterparts. But, males are found to outperform females in mathematics and science (Eitle 2005). Race has been shown to play a major role in the life of a student as well. Numerous studies have found non-white, minority students to be at a disadvantage and to reach lower academic achievement that whites (Bali & Alvarez 2004). Both African-American and Hispanic students are more likely to feel disconnected from their school and peers which leads them to lower academic achievement. It is thought that minority students, especially African-American students, come to expect discrimination in school and believe that racial prejudice will outweigh their effort (Battle & Lewis 2002).

This lack of investment in school has been connected not to a lack of ability, but rather, a reaction to the racial prejudice and discrimination that minority students face in the classroom and other areas of life (Battle & Lewis 2002). Good students often seek out and choose to participate in extracurricular activities. The good grades are not a result of the activity, but rather as an indicator of whether or not a student will participate in activities (Chambers & Schreiber 2004). Student deviance and delinquency have been linked to academic outcomes as well. Deviant behavior ranges from less severe acts such as disorderly conduct in the classroom to more sever acts like committing criminal offenses. Poor academic performance is often accompanied with deviant behavior. It is not clear, however, which comes first. The SES of a child is most commonly determined by combining parents’ educational level, occupational status, and income level. Students who have a low SES typically earn lower scores and are more likely to drop out of school. The economic hardships that are caused by low SES lead to disruptions in parenting, an increasing amount of family conflicts and an increased likelihood of depression in parents and in single-parent households (Eamon 2005).

For these reasons, I would say that SES is closely tied to deviance as well as an individual’s home life among other things. When an individual has a poor SES they do not have many options when thinking about higher education. In most places in the United States, those with low SES are very fortunate to have a resource within driving distance that gives most everyone a chance. This place is a community college. At a community college they want to help those with low SES and help those students gain what they need in order to attend that large four year university to obtain a bachelor’s degree to better their lives as well as the lives of others. One of the things that is dear to my heart is the experience of being in a community colleges. This experience has given me some of the best opportunities for growth. Because of Delta College, I have been able to do things that I would have never thought I could or would do.

Critics claim that community colleges actually hinder their students from transferring to four year colleges because they often lack supportive peer groups and dormitories and usually have an anti-academic atmosphere in which the faculty have low expectations of their students (Baker & Velez, 1996). I feel as if this statement and stigma is 100 percent false. Any faculty member that I have come across from any institution has gone out of their way to help any student even if the student is not from the institution they are a part of. Examining the long-term effects of having attended a two year college shows that when educational attainment was held constant, there were great similarities in the occupational prestige and earnings of those who began their education at two year or four year colleges. When attainment was not held constant, those who had attended two year colleges subsequently had jobs of significantly lower occupational status and income (Baker & Velez. 1996).

This is a very good and alarming fact at the same time. To see that the students who attain their credential at a community college then transfer to a four year college are still doing as well as the students who start at four year colleges are doing just as well is an amazing feat. Community colleges provide a number of specific benefits. First, their low tuition cost places college courses and degrees within the reach of millions of families that could not otherwise afford them. Second, community colleges have special importance to minorities. Currently, one-half of all African American and Hispanic undergraduates in the United States attend community colleges.

Access to college plays a very important role in someone’s life. Where someone grows up and their SES can hinder or better someone’s chances of going places they want and doing the things they want in life, especially when it comes to schooling. This is something that is proven in my research and there are a large amount of data and stats that back this up. In order for us to be the nation we want to be, this needs to change. Access to education should not be based on someone’s SES. Most of the authors research shows that they feel the same as I do. The articles have made me think a lot more about the idea of SES and education in general. It helped me expand my knowledge as to how exactly SES and other factors affect a person’s access to not only education but other important things in life.

Socioeconomic status, family size, and parental involvement will all influence the amount of resources available to an individual and as SES increases access to higher education will also increase. As an individual who knows how important education is, I want to find out a way to battle this problem when it comes to access to education. Battling SES and its impact on education could be a career in itself but if I can empower and enable one person that would be amazing. SES includes student role performance (SRP) factors, school factors, family factors and peer factors. Student role performance is how well an individual fulfills the role of a student in an educational setting.

Sex, race, school effort, extra-curricular activities, deviance and disabilities are all-important sociological influences on SRP and have been shown to affect access to education (Crosnoe, Johnson, & Elder 2004). If I could help student battle the issues above that would be the help I could do. If I could help come up with a program that helped students with a low SES come to a community college and bridge the cap and educate them at an early age that would be even better. I guess it is a good thing that I am going into higher education so I can work on these things someday in my career every day. 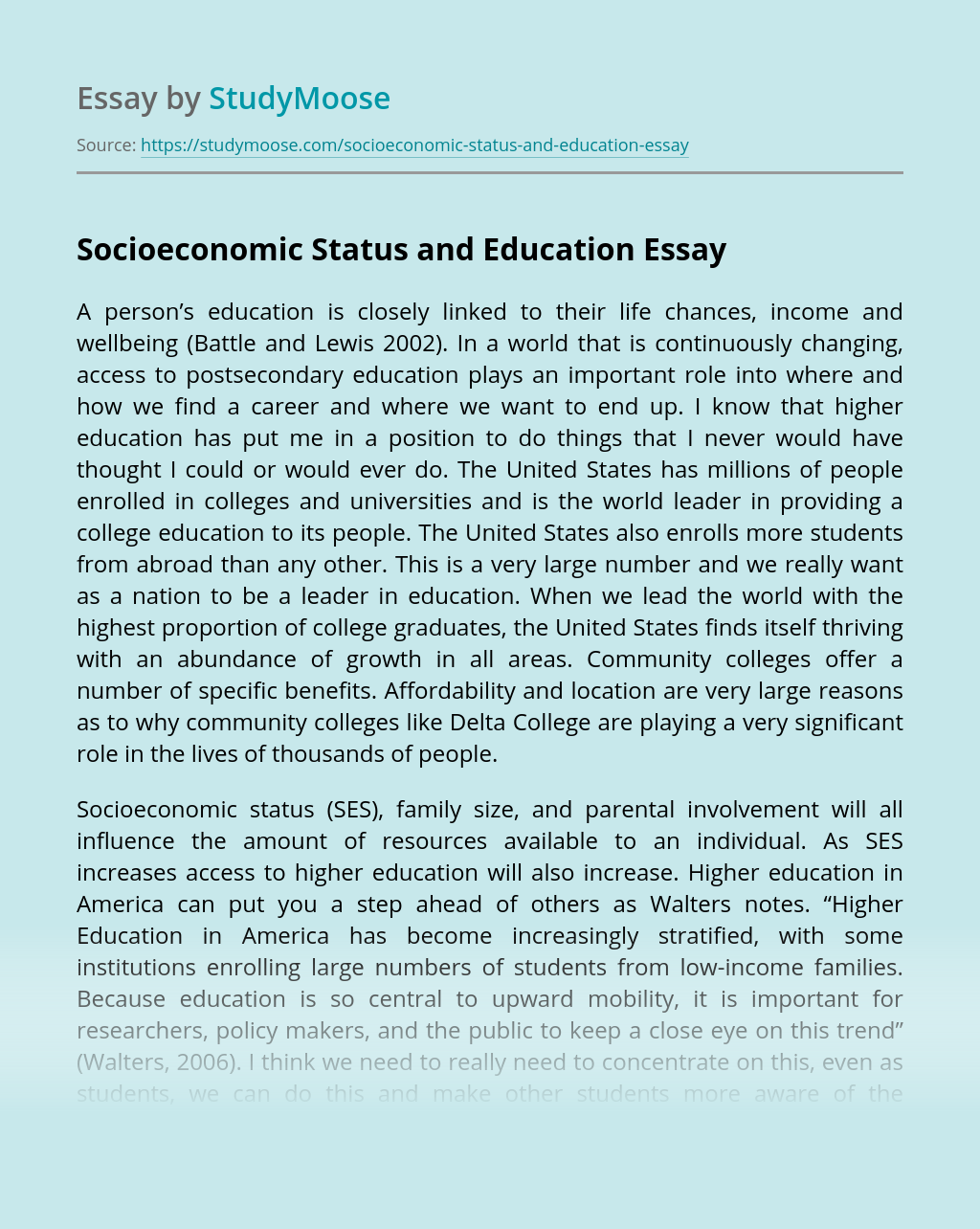