The movie A Day Without a Mexican

The movie “A Day Without a Mexican” is a comic movie that shows how California would be without the help of Latinos workers. When a mysterious pink fog surrounds the boundaries of California, there is a communication breakdown and all the Latinos disappear. The film represents in a sort of comic way the concerns about immigration in California. It clearly highlights the idea from how Americans are dependent on Latinos.

The main point of the film is what would happen if Latinos immigrants who are in here just disappear.

Don't use plagiarized sources.
Get Your Custom Essay on The movie A Day Without a Mexican Just from $13,9/Page

It affects the economy and the state stops working missing the Mexican workers. In the movie when the Latinos disappear, Americans are lost and do not know how to do simple things in life, because they have some Latinos do it for them. This movie shows how people rely on Latinos to do jobs that most people do not want to do. The movie has a good example of how Americans are dependent on Latinos. The senator’s wife is so dependent on her maid. Her maid is a Latina that used to do everything for her, but when the maid disappeared the senator’s wife doesn’t know how to do simple anything.

She doesn’t know how to cook, laundry or clean the house because she used to have a Latina. There are many issues of race and dealing with prejudice and discrimination because of being Hispanic. In the film, they make an important point about the difference between Hispanics and Mexicans. As in another part of the movie, the senator’s wife hires two illegal Latinos to paint the house, but when the senator finds the illegal Latinos in his house he took them out. The next day the senator says “they are illegal Mexicans from Guatemalans and Hondurans”.

Guatemalans and Hondurans are not Mexicans. They think that all Latinos are Mexicans because they speak Spanish. There are about forty countries south of the United States and Mexico border which means they are not Mexicans. It just seems like that society is in uneducated on the subject Latinos do not just come from one country. The disappearance of Latinos causes social and economic chaos in the state. White people are fighting inexplicably in front of car washes. Restaurants don’t have clients, because they don’t have Latinos cockers to do their meals or clean the dishes.

Also restaurant owners are looting and diving into black-market fruits and veggies in order to save their restaurants. Crops are rotting in the fields through the Latinos are gone. The white farmer is going to lose his entire crop, because of his missing workers. He said to the senator “fruit and vegetables don’t wait, I need capable people now”. He refers to the Latinos workers that make agriculture number one industry in the United States. But the true is that Americans are blaming in Latinos for the economic problems of the country is facing today.

The point I am trying to make is that I don’t understand why there is so much fear towards low skilled Hispanics taking low skilled jobs for less pay. As in the movie show, a lot of Americans don’t want do hard work for low pay, so who has to do it? Latinos are not stealing jobs. If they don’t like the system, that is, companies hiring workers for low pay don’t fight the Latinos, fight the capitalism. That is what our economic system is fueled by, minimizing costs to expand the bottom line so the guy at the top can have another vocation home. That’s just how it is.

None is going to hire someone for more money because it is moral. It is called competing for a job. The filmmakers occasionally pepper the screen with alleged facts promoting illegal immigration and contribution that Mexicans and Hispanics make California. The whole point of the film is that the illegal immigrants perform jobs that Americans are not willing to do and immigrants are treated as aliens not what they really are human being. At the beginning of the movie Americans are protesting against the immigrants. They are protesting that it is their nation and the immigrants that cross the border are taking their jobs.

They are going to lose the entire crop, because the Latinos are gone, and like what he says “it’s the INS fault, they making it hard for people that came here and stay California depends on this people to make this fields work. Sergio Arau At the beginning of the movie Americans are protesting against the immigrants. They are protesting that it is their nation and the immigrants that cross the border are taking their jobs As California tries to deal with the loss of an entire race, the remaining folks come up with some great reasons for the Mexicans’ disappearance. Some say that the sombrero is shaped like a UFO for a reason {wink!}.

Others believe it’s a form of the rapture, and the apocalypse is upon us. Still others believe that it is because the other races didn’t appreciate the Mexicans and so they just up and left. Regardless of the reason (true or not) the effect is felt throughout the State. Anglos and other nationalities turn to looting and diving into black-market fruits and vegies in order to save their restaurants. Talk shows swing from one extreme to the other, some saying their glad that the Mexicans are gone while others struggle to stay on the air with a skeleton crew (many camera operators were Mexicans).

The film’s faults are that this probably won’t be for those who live outside California. A Day Without a Mexican has a fairly specific target audience. But the great message, often funny and poignant at the same time, cannot be denied: we all need each other, regardless of race. Special mention of the film’s musical soundtrack must be made, too. The mariachi version of California Dreamin’ is outstanding, as is the theme song A Day Without A Mexican.

The movie A Day Without a Mexican. (2017, Jan 12). Retrieved from https://studymoose.com/the-movie-a-day-without-a-mexican-essay 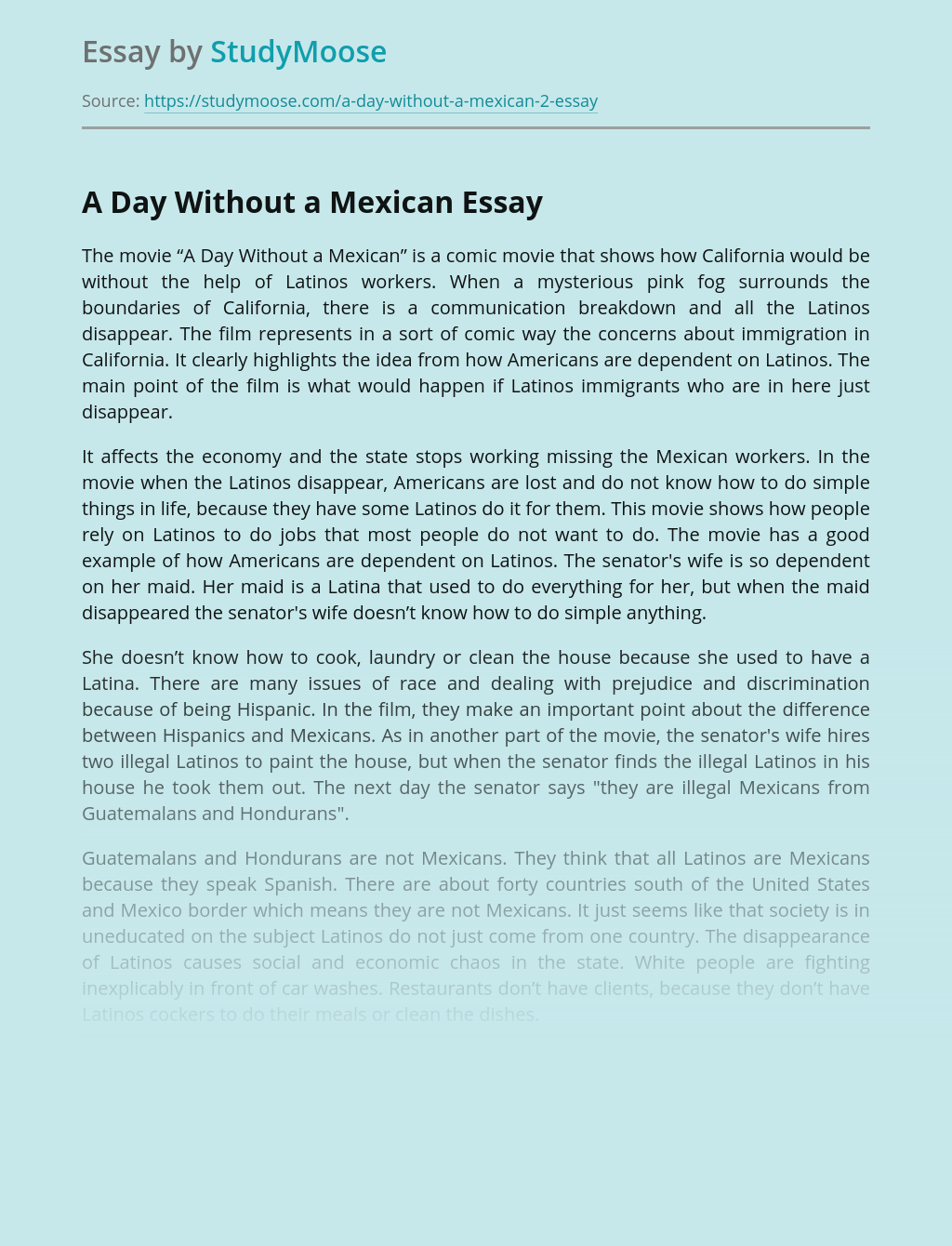 1. Loyalty Concepts: Loyalty is a structured marketing technique that gives you awards and, therefore, encourages you to obey loyal buying behaviour. The main objective of the programme is to have regular customers loyal to an organisation and also increase the commitments with occasional customers as well as develop new customers. It many times compels...

The Vietnam in Me

O`brein’s writing is more of an exploration of his true feelings. As a war veteran, he holds in himself some pieces of information that a normal citizen can’t understand. He has seen too much blood, fired too much bullets, and saw to many dead people. Even as a trained soldier, his experiences as a member...

Get Essay
Frederick Life and Times of Frederick Douglass

Frederick Douglass (born Frederick Augustus Washington Bailey, February 1818 – February 20, 1895) was an American abolitionist, editor, author, salesman, and reformer. Douglass is one of the most prominent figures in African American history and a formidable public presence. He was a firm believer in equality of all people whether they were black, women, native...

The Economy of Hunting and Gathering Societies

The Hudson Valley’s Best Halloween Attractions By Anthony Gadaleta Looking for top recommendations on the region’s best attractions for the upcoming autumn season and the scares, frights, and treats of Halloween? The Hudson Valley has an array of activities that will ensure a safe, enjoyable, and memorable experience. SCARY PLACES & HAUNTED DESTINATIONS Washington Irving’s...