“How My Brother Leon Brought Home a Wife” by Manuel E. Arguilla Essay

Baldo and his older brother Leon were both waiting for their visitor riding a carratela. When Baldo sa his older brother’s wife, who is Maria, he was amazed by her beauty as he narrates their journey to their home in Nagrebcan. Maria was felt a bit anxious because of meeting Leon and Baldo’s parents for the first time, but along their way home, she discovered the differences of the life of the people lived there and the life in the city where she met and fell in love with Leon.

Don't use plagiarized sources.
Get Your Custom Essay on “How My Brother Leon Brought Home a Wife” by Manuel E. Arguilla Just from $13,9/Page

Nagrebcan, Bauang La Union
Plot
Leon and Baldo waited for the arrival of Maria at the barrio. Maria was afraid that she will not be accepted by Leon’s father because she may not able to adapt their way of living in the province.

Baldo was ignoring to his older brother’s question about why did they have to go to Waig instead of Camino Real. (The reason is that their father wanted to test Maria if she is worthy to be Leon’s wife.) Baldo discussed their travel to his father.

Leon’s entire family talked to Maria.
1. Who among the characters in the story you appreciate most? Why? What trait/quality/characteristics you want to this character? Why? For my opinion, I think I appreciate Maria most. Because she accepted and respected Leon for what he really is. She didn’t care what Leon’s life back in Nagrebcan. She was a supportive and a loving wife to Leon. She was so endearing and kind-hearted lady. She was very keen to meet Leon’s family. The fact that the rural is different from the city can be somewhat discouraging but the closer hey get to the house, Maria still manages to overcome any trials.

“How My Brother Leon Brought Home a Wife” by Manuel E. Arguilla. (2016, May 19). Retrieved from https://studymoose.com/how-my-brother-leon-brought-home-a-wife-by-manuel-e-arguilla-essay 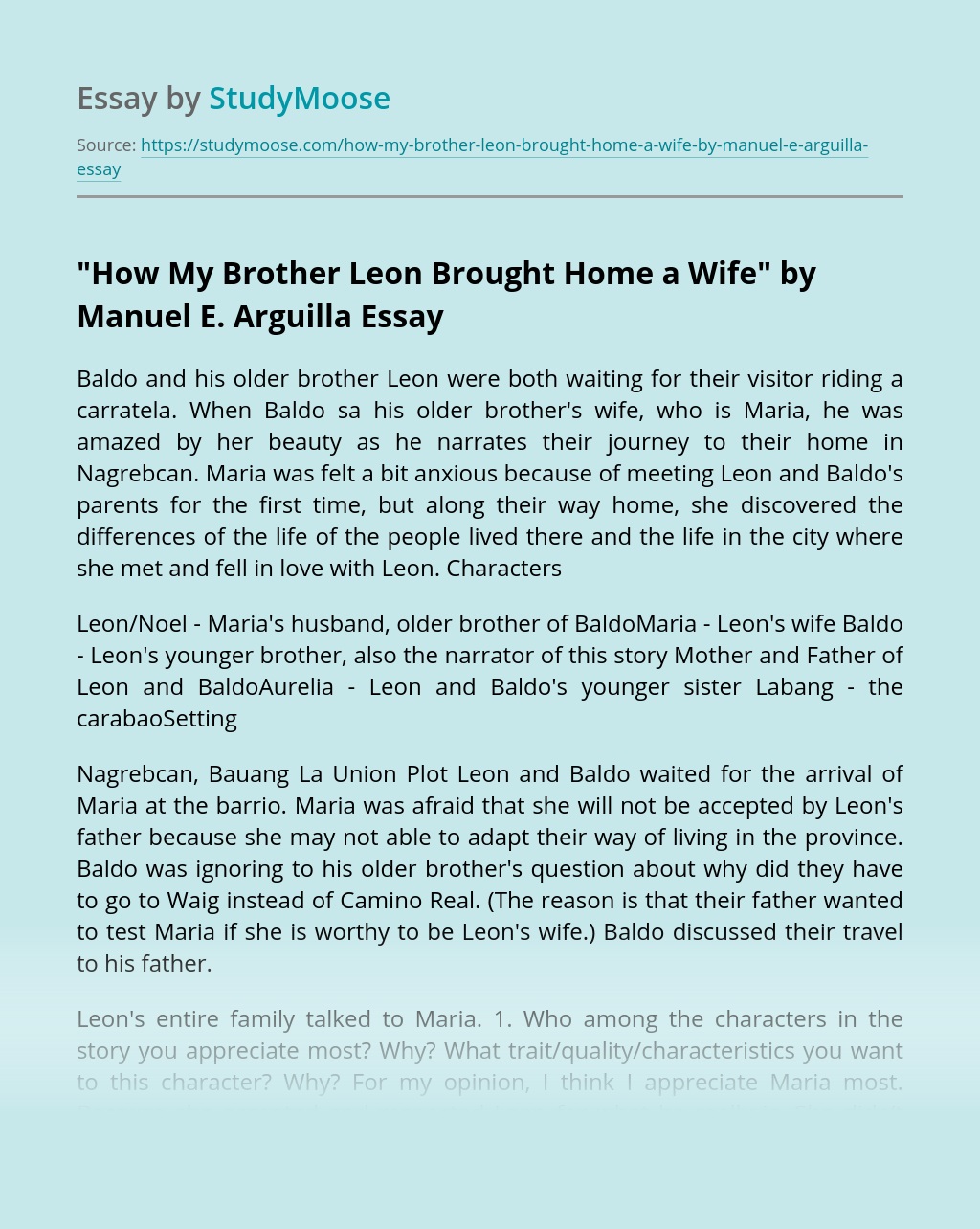 The Causes Of World War 2 History

World War 2 was a global military conflict that lasted for nearly 6 years and resulted in heavy losses for all that were involved all over the world. In this paper I will express my opinion on what I feel were two crucial attributes of the Second World War; why it was fought and how... VIEW ESSAY

In the narrative “The Turtle” by John Steinbeck, he uses description throughout the story. He utilizes objective, personification, similes, and metaphors throughout the story. Steinbeck depicts this through a scene of a turtle crossing the roadway. He is showing the human capacity for guts and perseverance. The turtle is a metaphor for the farm workers... VIEW ESSAY

View sample
Preventing bullying in schools: A guide for teachers and other professionals

The issues associated with bullying and violence in school is seen to be rampant even in the community. These issues are related to threats, physical aggression, and harassment and teasing. However, it is important to note that the behavior should not be accepted as it is an anti-social behavior which destabilizes the quality of school... VIEW ESSAY