How My Brother Leon Brought Home a Wife?

Shame! Manuel Viloria says the collection was only twenty pesos.

Turn in your highest-quality paper
Get a qualified writer to help you with
“ How My Brother Leon Brought Home a Wife? ”
Get high-quality paper
NEW! AI matching with writer

The story, like most of Arguilla’s prose, transpires in Barrio Nagrebcan in La Union, the birthplace of Manuel E. Arguilla himself. You’ll immediately realize how the writer loves his hometown by the vivid imagery and sensuality that he offers on the plate. From the shapes and the sounds to even the scent of the air, Arguilla spares no detail to prove that beauty exists in Nagrebcan.

From the title, you can surmise what type of story this is and how it could develop as it goes along.

Proficient in: My Brother

Leon is actually the big brother of the main protagonist, the wielder of the mystic point-of-view, but his wife takes to him as Noel as the latter coinage is presumably a modern twist of Leon though obviously it is an inversion of the word. Baldo is the little brother and Maria, Baldo taking traditional names into mind as he hears her name for the first time, is the wife whom Leon/Noel brought back home.

Maria is actually city bred and Leon/Noel and Baldo are blatantly townsfolk. There’s the culture clash that serves to be the conflict, though only between the father and the oblivious Maria. Since Leon/Noel brought Maria to Nagrebcan, it can be presumed that they’ll be staying there. As a precaution, unbeknownst to even Leon/Noel and Baldo, their father have asked the younger son to do certain things out of the norm just to see if the wife can really adjust to her new setting â€“ the barrio and the family.

Read more: How My Brother Leon Brought Home a Wife by Manuel Arguilla

Certain characters, with depth, to note are their sister Aurelia and the bull Labang.

What I like about the short story is Arguilla’s character development. They seem to just pop out of the text, giving the reader an impression that they could have been, and could very well be, real people. Most writers often base their characters on real life acquaintances. Whether Arquilla went deeper or not, he still pulled it off and impressively, if I may be so bold.

The ending reflected Baldo’s attraction to Maria or, to be more specific, to the notion of finding his own wife someday.

In its entirety, How My Brother Leon Brought Home A Wife focuses on the aforementioned culture clash or the setting shift when someone from the barrio or the city is transported to the other. The concept is distinctly Filipino but essentially global. People outside of the Metro (Manila, specifically) wish to travel, and to a greater extent, live in the modernist capital because it is widely believed that they’ll find greater pleasures and successes there. In other words, it borders on a “grass is green” idea or immigration issues.

Arguilla makes me want to go visit Nagrebcan and spend one night there.

How My Brother Leon Brought Home a Wife?. (2016, Oct 30). Retrieved from https://studymoose.com/how-my-brother-leon-brought-home-a-wife-essay 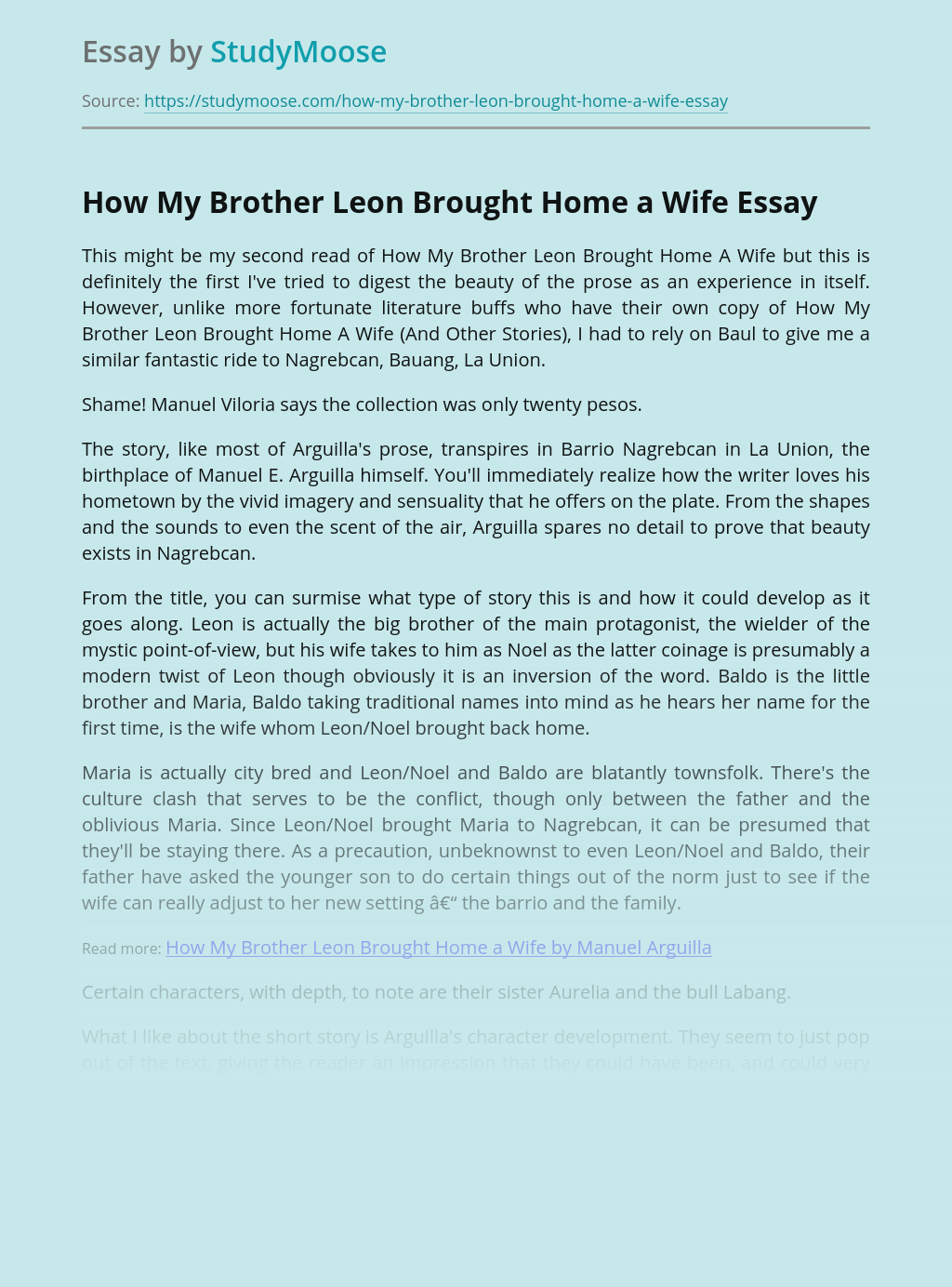 Turn in your highest-quality paper
Get a qualified writer to help you with
“ How My Brother Leon Brought Home a Wife? ”
Get high-quality paper
Helping students since 2015
Stay Safe, Stay Original