‘The Wife of Bath Prologue’ and ‘The Wife of Bath Tale’ is an integral part of the “Canterbury Tales” narration. In these works, Chaucer depicts social and moral problems, ridicules false values and depicts the role of women in the Middle Ages. This is a unique part of the “Canterbury Tales” in which Chaucer portrays events through woman’s eyes and a female storyteller. Thesis The main difference between the Prologue and Tale is the main theme and a type of storytelling.

‘The Wife of Bath Prologue’ and ‘The Wife of Bath Tale’ are based on different themes and topical questions. The Prologue discusses marriage and the relations between men and women, virginity, sexual relations, human experience, etc. The wife says: “The dart is set up for birginitee (line 75). In contrast, the Tale describes hardship and grievances caused by low status of women in the society and inequality with men. In both pieces, the Wife of Bath describes her strong emotional experience atypical for women of her historical period.

Her sexual experience, emotions and psychological states are strong, and mirrored in the texts. She rises above both in the rejection of her aged, crippled, disturbing husbands and in the strength of her passion for men. The burning desire to new sexual relations creates the feeling of physical dissatisfaction and necessity for new emotional feelings atypical for women of her time. Her actions do not correlate to the women of her time, because Christianity and church was a strong force which dictated social norms and social order, values and commandments to women. In Prologue, Chaucer criticizes the role and impact of church on social life using Biblical citations.

The other difference is that the Prologue is based on the central character, the Wife of Bath, while the Tale is based on fantastic character of a rapist. The first person narrative helps to create a unique atmosphere and a message of the Prologue directly addressing a reader. In contract, the Tale reflects morals of wives and their desire to have devoted husbands asking “This is to seye, what wommen love moost” (line 985). The Tale is based on symbolic and philosophical representation of the theme of marriage while the Prologue describes real-life examples and human experience of the Wife of Bath.

The main character, the wife, does not fit into her time described as rebellious and independent women. She has traveled a lot and has great experience in love and has intimate relations with men. The Wife of Bath has married five men challenging Christian morality and norms. The Wife of the Bath has had five husbands: three “good” and two “bad” husbands. Using personal experience, the wife underlines that balance of power between spouses helps to control over marital relationship. During the Middle Ages, the women had no right to choose their husbands because their destiny depended upon will of their fathers and social status of their families.

In the Prologue, the discussion concerns the role of women and men in marriage and dominance of men upon women while the Tale illustrates the themes questioned in the Prologue: “That wol nat be governed by hir wyves” (line 1262). The Wife opposes strongly to any tension on her personality trying to keep and preserve her values and ideals. Her actions do not correlate to the women of her time because religion limited sexual desires of the women, in spite of the fact that church and Christianity were used to defense and legitimatize the institution of marriage. Christianity was used to maintain defense of domesticity and the role of women as mother and wives only.

In sum, this was a time of chaos and great change which left people with a sense of disillusionment. It is possible to say that in the Prologue, Chaucer prepares a ground for further story development and symbolically illustrates these ideas and themes in the Tale. This work is full of feminist ideas speaking about rights of women and their happiness. Chaucer moved beyond traditional roles of women portraying them as loving and sexual characters able to fight against male dominance. 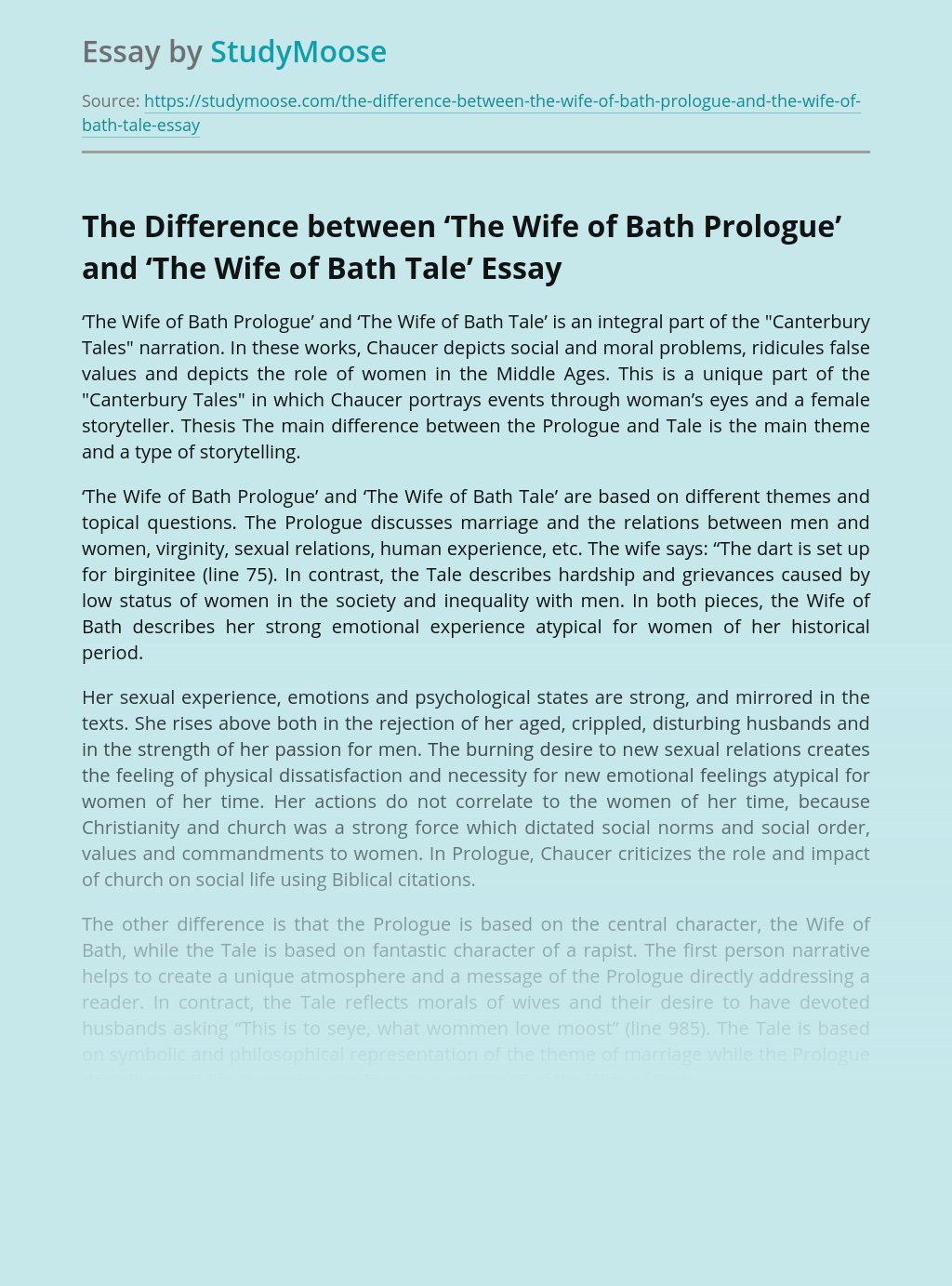 The film “Crash” written and directed by Paul Haggis was taken place in Los Angeles. This movie illustrates how discrimination and prejudice has affected our everyday lives, due to the misconceptions we have of each other. All the characters in this movie are either victims of prejudice and discrimination or are guilty of it. To...

1 Executive Summary According to the American Marketing Association, “marketing is an organizational function and a set of process for creating, communicating and delivering value to customers and for managing customer relationships in ways that benefit the organization and its stakeholders” (Kerin, 2005, p.6). I have completed a marketing audit of Ben & Jerry’s Homemade,...

Since ancient times, human beings have been persistent in modifying their environment through changes in various natural resources. However, the commencement of Industrial Revolution paved way for much of human activity that has had a strong impact on the global landscape. It is without question that the activities of human affect the composition of the...

How to Carry Out Art Appreciation

Whatever form of art we see, its main characteristic is to please our senses. Art expresses the feelings of the artist that can be interpreted by us in various ways. This lesson will discuss the different forms of art, its elements and principles of art design that make our life more enriching. Objectives At the...