Chaucer was born in 1343, and was known for his renowned collection of the Canterbury tales. A group of pilgrims of different social ranks travelled to Canterbury, each telling their tale on the remarkable journey. From the Tabard Inn to the shrine of St Thomas á Becket which lay in Canterbury, they made a pact to illustrate stories to one another. Chaucer uses each individual character prologue to capture the reader’s attention, as well as engage them to a feel for each pilgrim’s behaviour.

Don't use plagiarized sources. Get your custom essay on
“ Chaucer is Successful in Creating Humour in the Wife of Baths Prologue and Tale ”
Get custom paper
NEW! smart matching with writer

Chaucer is successful in creating humour in the Wife of Bath’s prologue and tale. A heavy use of fabliaux, (which are extended jokes that are commonly known to be bawdy and full of sexual innuendo) is used to emphasize the ridicule of the wife of Bath in whom Chaucer satirizes. An example of this is found in lines 706-710 where the wife of Bath is implying that mature scholars unable to hold an erection anymore write ‘tell-tale’ attacks against women at the bitterness of their impotence.

It is possible that she may be indirecting Jankin’s future with her as he himself is indeed a scholar. She says “Therefore no woman of no clerk is preysed. The clerk, when he is oold and may nought do, of Venus werkes worth his olde sho, Thanne sit he down and writ in his dotage That women kan nat kepe hir marriage.” This is particularly hilarious because his penis is being referred to as an ‘old shoe’ with the connotations of his manhood being ‘worn out’ and old- fashioned, as well as subtly implying the wife of Bath needed a new penis belonging to a fresh, new husband.

The most obvious sense of humour in this tale, is in the title itself, it’s biggest implication being that because she has had her fun with men, as well as married some of them; “ I hadde the bettre leyser for to pleye, And for to se, and eek for to be see Of lusty folk” that she is married in a sense to the whole of the town of bath. She also knew so much about marriage from her past experiences that she could lend advice to an women in her village who had problems with men, almost like an agony aunt as shown; “Of remedies of love she knew per chaunce, For she koude of that art the olde daunce.” This is deliberately ironic because The wife of Bath was anything but a wife, as she did not stick to one husband, or treat her husbands in the ideal way a wife were to treat them. Rather she’d dishonour and disrespect them.

A huge irony that is continuous in the Wife of Bath’s tale is the fact that she uses biblical references and religious icons to justify her reasons for her five husbands. Line 28 states ‘God bad us for to wex and multiplie; That gentil text kan I wel understonde.’ She argued that God told us to multiply so she used this as biblical proof to justify her reasons for marring so many times. This is comical to us as the audience because, yes indeed God told us to produce offspring, but the wife of Bath manipulates this verse to suit her, enabling us to believe that she married each time because she was unable to produce children out of each previous one as she went on. This manipulation works against her because she has failed to give the reader evidence that she actually wanted to have children; instead leading us to believe the opposite.

Another justification used can be found in 1st Corinthians 7 vs. 9(Line 52); ‘Bet is to be wedded than to brine.’ The meaning of this being, it is better to get married than to stay unmarried and roast in passion. The wife of Bath again misinterprets this verse and deploys it to suit her situation. Biblically, the verse meant the ‘wedded’ to be once off, therefore discouraging young couples to have sex before marriage, as temptation to do so was as strong in those days as nowadays. It is witty that the wife of Bath uses this to justify her reason for marrying five times. She is implying to the audience that every time she wants to have sex with a man, rather than just committing the adulterous act, it’s her ticket to marry the next bachelor as an excuse to satisfy her sexual desires. Of course, as the audience, we know this is not how the mind of a normal person works, indeed making the wife of Bath a comical character mentally as well as physically.

It is rib-tickling that the wife of Bath exhibits the amount and depth of violence as the ‘evil’ women Jankin has been describing between lines 766-772. An action in almost direct proportion to what the wife of Bath inflicted towards Jankin is that of line 766 where it is said “That somme han slain hir housbondes in hir bed.” She proceeded to punch him in the face after she had provoked him by ripping three pages out of the book that was downcasting wives; “I with my fest so took him on the cheek, That in oure fyr he fil backward adoun.” She lunged at him out of nowhere, and it’s unanticipated, as well as the fact it directly contradicts with Jankin’s opinion of a good and faithful wife. Out of the blue she unleashed her feisty behaviour upon him, and the shock diminished quicly enough as he ‘up stirte as dooth a wood leoun.’

It was particularly entertaining that the wife of Bath managed to single-handedly trick the scholar Jankin into obtaining the mastery of their relationship. A powerful imagery of the wife of Bath is her controlling the ‘horse bridle’ of their marriage, which illustrates the surrender of Jankin between lines 815-825. By exaggerating her ‘near-death’ experience, she was able to cunningly out-smart her husband to return all the land and property that she originally owned but decided to write-off to him previously out of foolish love.

Chaucer is Successful in Creating Humour in the Wife of Baths Prologue and Tale. (2017, Aug 01). Retrieved from https://studymoose.com/chaucer-is-successful-in-creating-humour-in-the-wife-of-baths-prologue-and-tale-essay 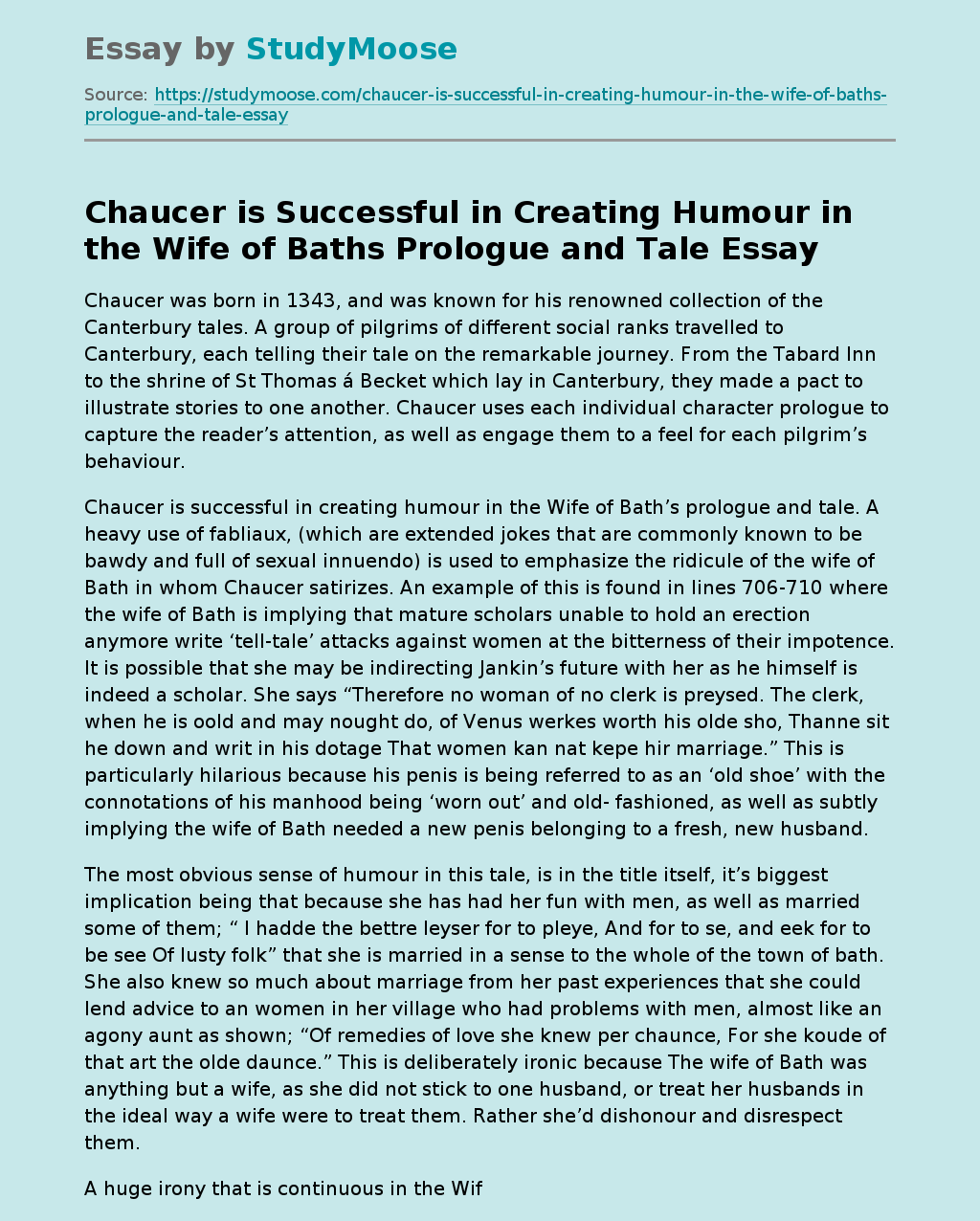