Literary Analysis of “the Millers Tale” by Geoffrey Chaucer

Don't use plagiarized sources. Get your custom essay on
“ Literary Analysis of “the Millers Tale” by Geoffrey Chaucer ”
Get custom paper
NEW! smart matching with writer

Throughout the story, Chaucer makes a mockery of the stereotypical idea that the catholic religion is always right by exposing the church as a form of corrupt propaganda to the public. As a result, Chaucer believes the Catholic Church is a corrupt, immoral organization, and has a negative impact on society. Before the story is told, the reader comes across a prologue. The reader stumbles upon the first challenge on authority against those of higher status. It also sets up the central theme of the story.

A drunken man of lower class interrupts a knight from telling a story.

Despite the Miller being intoxicated, he still knows he is in the presence of the public and therefore says “if you are offended please don’t fret…don’t blame me if the choice you make is wrong” (Chaucer 2). He pleads to the public that his intentions are not to offend anyone but to entertain with a story. In “The Millers Tale” Nicholas is a student studying astrology and rents a room from a carpenter.

Chaucer doesn’t necessarily describe his physical appearance but does take the time to describe his room, stating “around this room one’s eye in wonder roams and sees on shelves his Ptolomaic tomes” (Chaucer 3).

The Ptolomaic models in Nicholas’ room shows how the Catholic Church had an impact on students, scholars, and society itself. The Ptolomaic models are part of the geocentric theory that states the earth was at the center of the Universe and everything revolved around it. This theory’s main inspiration was the church’s idea of the earth being the center of everything. But in authenticity the church was wrong thus Chaucer’s implication of the Catholic Church misinforming its people and creating something that might make the church look good. He also flirts with the carpenter’s young wife and eventually sleeps with her.

Nicolas has full capability of tricking a “simple carpenter” and comes up with a plan by using a religious story in order to continue his sexual sensations towards Alison. Nicolas says “My learning in astrology lays bare that after midnight on next Monday there shall fall a rain heavy…That Noah’s flood” (Chaucer 10). The reason why Chaucer mentions Noah’s Arc is to show the mockery of the church. Chaucer uses the religious story as a defense for Nicolas to have sex with Alison. In a way Nicolas is behaving in the same manner as the church because the church presents religious stories that people believe.

The word of the church according Chaucer can captivate a person’s mind in a matter of seconds just like the naive carpenter. The only female character in the story, Alison is seen as a helpless, young, attractive, girl who is married to the old carpenter. Unlike Nicolas, Chaucer gives us a full description of Alison’s physical appearance because he believes that under the Catholic Church, the role of women is inferior to men; they are to provide instant gratification to men and to serve them. Chaucer describes Alison as: This fair young wife had a quite a lovely face; Her body slim displayed a weasels grace.

A belt she wore that silk strips did adorn; An apron white as milk brought in the morn, With flounces tiered, upon her waist was worn, Her smock, embroidered all in front, was white; Her white cap featured ribbons wrapped about. Just look at me her livery seemed to shout. (4) Her beauty is compared to animals and nature. Chaucer gives us a sense of where women in society stand. Her ribbons and white cap is a symbol of purity under the eyes of the church but Alison rebels against her lifestyle, she commits sin by having a sexual affair with Nicolas.

After the affair, Alison quotes “My husband is with jealousy so filled, That I’m quite sure that I’ll be killed” (5) showing the reader where women stand in society and are nothing more but appealing figures who are inferior to men. Chaucer purposely gave the characters their own unique descriptions to show the separation between men and women at a time where the Catholic Church ruled. In the peculiar character of Absolom, his role in the story is a parish clerk. He is set out to be god’s helper in society, to spread the message of god amongst the community.

These parish clerks represent the face of these intuitions where people are taught to only worship god and shun all those who oppose of it. Absolom literally and figuratively embodies the church. Chaucer purposely describes Absolom physical appearance as ladylike to show the true vision of what people presume of the church from the exterior to be. Chaucer describes Absolom as: Whose ample hair was rolled In graceful curls that shone in color gold; and stretched out in fan shape, large and wide, His skin was ruddy, eyes of greyish hues with gaudy gothic carvings on his shoes. In elegant red stockings he was shod.

All trimly fit he was to worship God. Light Blue the color of his cassock tight. White as a lily, soft as eiderdown, So help me God he was a merry guy. (5) A commentary on the exterior presence of the church towards its community. From the outside these immense structures that are called churches are beautifully hand crafted by men and have a physical appearance that can’t be neglected, which might give a person a sense of purity and holiness. Chaucer further implies that the Catholic Church puts on a display for the people with their gold robes and fancy gold accessories to heighten there place in society.

The people can only conclude what’s on the outside of these religious organizations and assume that they are truthful. Another connection that Absolom brings to the story was his sexual appetite towards the carpenter’s wife and his usual peeking around the town. This demonstrates the true dark side of the Church and the evil that is buried in the interior part of the institution. After Absolom attempt on kissing Alison, he is played a trick on, Alison sticks out her rear and Absolom kisses it. Absolom raged over the fact of embarrassment states “I unto Lucifer my soul entrust.

I would the wealth of this whole town decline” (Chaucer 16) showing signs of evil and revenge a quality of the devil. The interior portion of the church is mysterious. Chaucer tries to imply that the church might be this evil concept to the public. Only the people who work for the church know the true meaning of what the church actually stands for. Epicurus defines injustice as “injustice is not an evil in itself, but only in consequence of the fear which attaches to the apprehension of being unable to escape those appointed to punish such action” (252).

He believes that society sets up rules for people to follow and instill fear. But there is bound to be people who break these rules and get away with the crime. Just like the Church, it informs the public that if one commits sin they are going to hell, putting constraint on people and eventually rebelling against the church. Chaucer clearly believes that the Church is some form of corrupt institution in which people are brainwashed to believe that everything revolves around God. He suggests that the churches influence and ideas ultimately reflects on how people act.

Chaucer provides a vibe on questioning the authority over these holy people. Who are they to say what distinguishes good vs. evil. Does the concept of God is what truthfully bring people happiness? People see these big infrastructures with colorful stained glass, portraits of saints; this gives the public a sense of good. Others may see a man hammered to a cross murder, cruelty, or sexual imagery. But Chaucer sees the Catholic Church is a corrupt and immoral institution that has a negative influence on society.

Literary Analysis of “the Millers Tale” by Geoffrey Chaucer. (2020, Jun 02). Retrieved from http://studymoose.com/literary-analysis-of-the-millers-tale-by-geoffrey-chaucer-essay 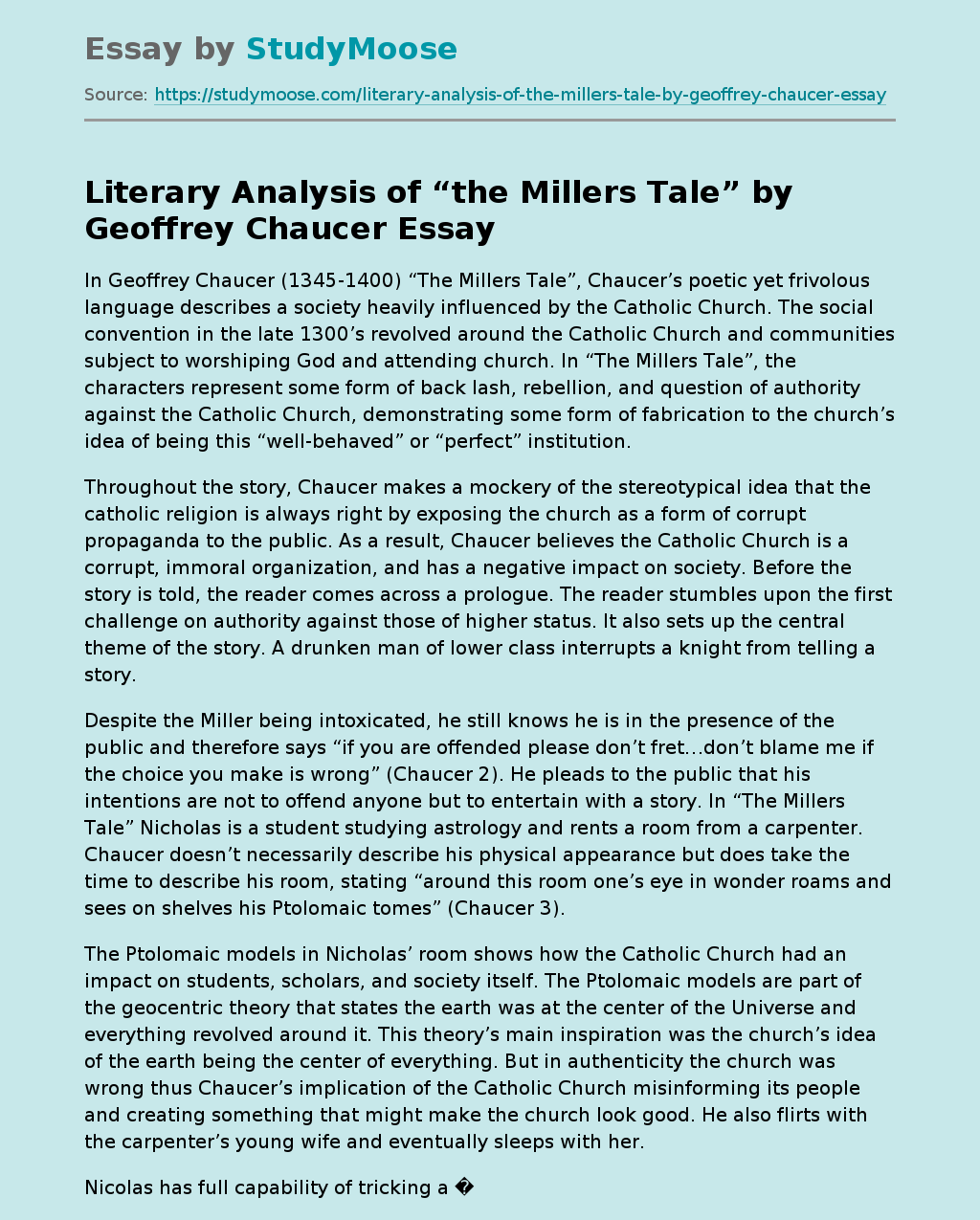