In this essay I am going to reveal how Chaucer uses and adapts the literary conventions of fabliaux and courtly romance in “The Miller’s Tale”. Chaucer plays around with the conventions of fabliau and courtly romance engaging the idea of a carnival narrative, which uses the reversal of roles. There is also a Latin saying the sprouts from this: “bais cul”, which means, “kiss my ass” and basically sets the tone of “The Miller’s Tale”. Fabliau is a mediaeval verse narrative written for and by aristocrats in whom they make fun at the social appirations and customs of the middle classes.

Don't use plagiarized sources. Get your custom essay on
“ The literary conventions ”
Get custom paper
NEW! smart matching with writer

This is the first in the mockery. For the narrator is the miller who is brawny and big boned (L. 548 of The General Prologue) and would steal corn then charge three times the price for it to be brought back (L. 564 of The General Prologue). A man who has no social class whatsoever. The narrative is usually very sexual and earthy.

It contains the main characters of a cunning woman, a prostitute, a jealous old husband, a lecherous student and a merchant or priest, of which the husband is normally humiliated.

The characters are given no characterisation therefore no sympathy can be given. The main stories normally tell of a second Noah’s flood, a misdirected kiss, or of branding. All the main stories and characters of fabliaux are used in “The Miller’s Tale”. The cunning women and prostitute being Alison, the jealous old husband being the carpenter, the lecherous student being Nicholas and the merchant/religious figure being Absolon.

However, this is where Chaucer adapts the literary convention of fabliaux into courtly romance by giving the characters description.

Courtly romance is a narrative that describes the conventional, refined behaviour of aristocratic lovers in high chivalric romance. In courtly romance the would-be lover woos the lady with different arts and would try to win the lady over in tournaments. He would keep his wooing secret to protect the lady’s honour and be unable to sleep or eat through his passion for his chosen lady. Both Nicholas and Absolon try to woo Alison. Both are youthful and vigorous but their approach to Alison is very different.

Absolon is more of a courtly lover this is shown through his singing to Alison (L. 250) and sending gifts (L. 270), even though the gifts themselves were wine, honey spiced ales and money (L. 272) are not courtly gifts. His wooing goes unheeded and is, of course, too far down the social scale to be seen as courtly for is just a perish clerk (L. 204). Nicholas uses a lot of language of love (L. 172-173). For example, sweetheart and claiming that he will die if he cannot have Alison but is undercut by his obvious lustful actions: grabbing Alison by the “queynte” (L.168).

This gives a humorous contrast to the seriousness of the love in “The Knight’s Tale”, and also reminds us that the ultimate purpose of courtly love, no matter how noble it sounded, is sexual conquest. When introducing a Lady, all narrative is stopped, and she is described in physical detail using conventional metaphors and similes. Alison is first shown as charming (L. 125) but is mainly described against conventions of courtly romance as a wholehearted endorsement of youth: “young and wild” (L. 117), “skip and frolic about” (L.150).

Again against conventions her descriptions are filled with animal and nature images: her body is as graceful as a weasel’s (L. 126), she’s softer than sheep’s wool (L. 141) and better to look at than a pear tree (L. 140). This also relates to “The Merchant’s Tale”, where the pear tree becomes a symbol of adultery. This is called proleptic – where Chaucer anticipates the future. He also uses this in the pun licorice (L. 99)/ lecherous (L. ) preparing us for Nicholas’s future intentions. Alison is as skittish as a colt (L.155) and wore an apron around her loins as white as morning milk (L. 128).

That sounds sweet but her eyes are “wanton” under her plucked eyebrows (L. 157). She is also called by flowers’ names – a primrose and a “piggesnie” which also means “pig’s eye” (L. 160). Therefore the suggestion of innocence is offset by a sense of natural instincts and unthinking passion. When the Hero is described it is in terms of his conquests and character. Nicholas is described in the courtly romance conventions, by his character and conquests, although his conquests and character are not honourable.

He knows all about love, sexual pursuits and astrology (L. 92, 94, 100). He is also described as “hende” (L. 91), which means “nice” and “pleasant”, but also means “sly” and “handy” in other words ready for action, which is very ironic. When Absolon is described he is undercut by his effeminate description. With prettily curled hair (L. 206), rosey complexion (L. 209) and his dislike for farting (L. 229-230), he is described as a romance lady rather than a man. Plus a courtly romance man is never described in physical detail.

Unlike Nicholas he is not “hende” but “jolly” (L. 231), perhaps that explains why he is useless in wooing Alison. Against the conventions of courtly romance and fabliaux Chaucer also uses everyday language and imaginary that are taken from and are descriptions of everyday life in the provinces in mediaeval England. This gives realism to the story, for example, John going to Osney on business, Alison’s clothes, Nicholas’s belongings, and the curfew bell. 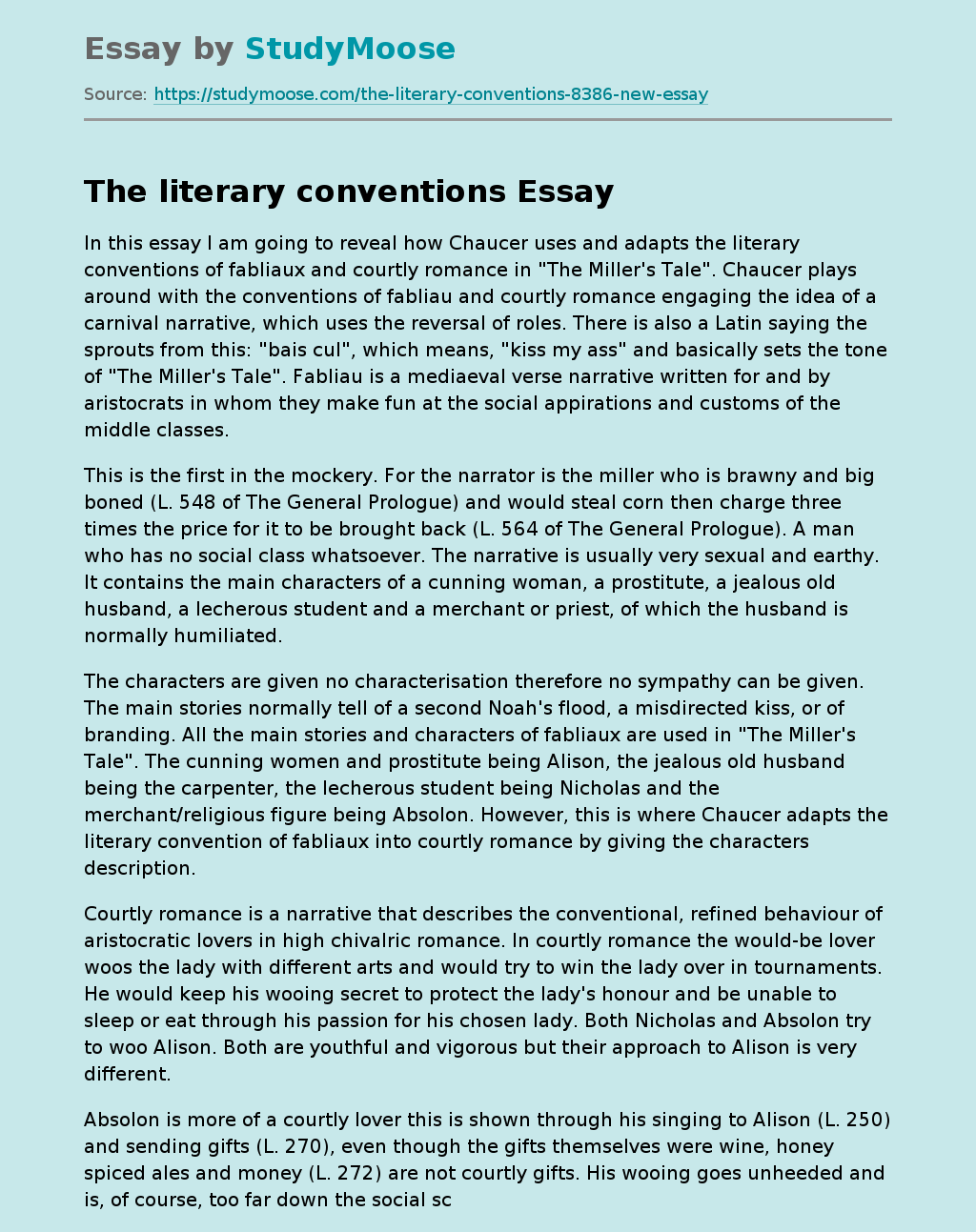