Gothic conventions in 'The Others'

The film ‘The Others’ made by Alejandro Amenabar in 2011 is a film about a woman who lives with her two photosensitive children in their large, old home which she believes is haunted by ghosts. This film uses a large range of techniques and ideas to emphasise and contribute to its gothic themes. These techniques include dark and light imagery, symbolism and setting. The Others also uses traditional gothic ideas to develop these themes throughout the movie, including suffering, fixation of death and supernatural elements.

Don't use plagiarized sources. Get your custom essay on
“ Gothic conventions in ‘The Others’ ”
Get custom paper
NEW! smart matching with writer

Over all these ideas and techniques contribute to the eerie feel and suspense which makes this movie so captivating and gothic.

The first technique used in ‘The Others’ is dark and light imagery, throughout the entire film there is a battle between truth and how it is perceived and Amenabar uses this light and darkness as a symbol of this. An obvious example is the curtains which as used to block out all light and ‘protect’ the children.

They create a haunting darkness throughout the entire house for the most part of the movie, this is contrasted by the candles the mother walks around with showing how she is the key to the truth. At the end of the movie when the children become aware of the truth- that their mother killed them and they’re ghosts the curtains are removed allowing light or the truth to flood into the house. The use of dark and light imagery helps enhance the gothic themes by creating the mood and setting of the film.

Another technique used to create a gothic feeling in the film is symbolism. Symbolism is used to make subtle hints to what the ‘truth’ is and to make you feel like things aren’t what they seem. Some examples are the clothing used in ‘The Others’ where Grace (the main character) wore dark, long dresses which covered up the majority of her body. These outfit choices were not only used to set the time period of the movie but it was also used a symbol. Her clothing was symbolic of the dark, repressive nature of her society and her internal suffering shown in the dark reds of her dresses. One more example is the constant looking of doors which is resemblant of entrapment of the mind and physically. This symbol also is used to depict the hidden secret which the family keeps throughout the film and the doors are only unlocked when the secret is released.

The setting was used in the film ‘The Others’ as the key stepping stone to making the movie have a gothic feeling to it. The main characters live in a large home with many different secret areas and rooms which are made more secretive by the darkness that the curtains create. These rooms are used to foreshadow for the hidden secrets which are contained in their home. The house is surrounded by a large forest which cuts them off from the rest of civilisation, this is used in gothic stories to create a feeling of isolation and to physically represent the psychological separation which the family has from the world. Beyond the forest is covered in fog which emphasises the isolation and secrecy which was a key idea which was repeatedly brought up in the film.

A common gothic idea which was used in the film ‘The Others’ was the idea of suffering both physically and psychologically and how they are linked together. Suffering is very often used in gothic stories because it shows the inner darkness of the mind and the evilness of humans. Shown in the film through Grace (the main character) who has been waiting since the war finished for her husband to come home. After years the stress of raising two children on her own and potentially losing her husband weighs on her and causes a psychological suffering which she can’t show in front of her children or staff. Eventually Grace can no longer live with the pressure of her psychological suffering and she snaps which shows the link between psychological and physical suffering and she kills her children and then herself as she can no longer bare living with the thought of what she had done. This traditional gothic idea was used in the movie to show that every day people are capable of evil and dark things when pushed.

A recurring theme throughout the entire film is a fixation with death. This is an idea used in gothic texts because of its darkness and mystery as no one really knows about what happens when one dies but we know it is the ultimate payment in life. Most gothic writers are fascinated with it and have a preoccupation with it in stories as it creates a feeling of eeriness and shows that something is not quite right. This is also linked in with supernatural elements which work as a symbol for death. In ‘The Others’ supernatural themes and a preoccupation with death are used throughout the entire film from the lingering death of the husband in the war, the book of the dead, the cemetery which surrounds the house and the constant idea of ghosts. All of these examples were used by the director to create suspense and to slowly build up and lead to the ending of the film.

Over all the film ‘The Others’ used a large range of techniques and gothic conventions in order to captivate the audience and contribute to a scary and unsettling feel over the course of the movie. These techniques are dark and light imagery which emphasises the perception of truth, Symbolism which uncovers the secret themes and ideas of the film and setting which was used to create the idea of isolation. This movie also uses many gothic ideas in order to communicate the gothic themes, these ideas include psychological and physical suffering, preoccupation with death and supernatural elements. All of these conventions were used effectively in order to create the movie’s gothic feeling.

Gothic conventions in 'The Others'. (2016, Apr 01). Retrieved from http://studymoose.com/gothic-conventions-in-the-others-essay 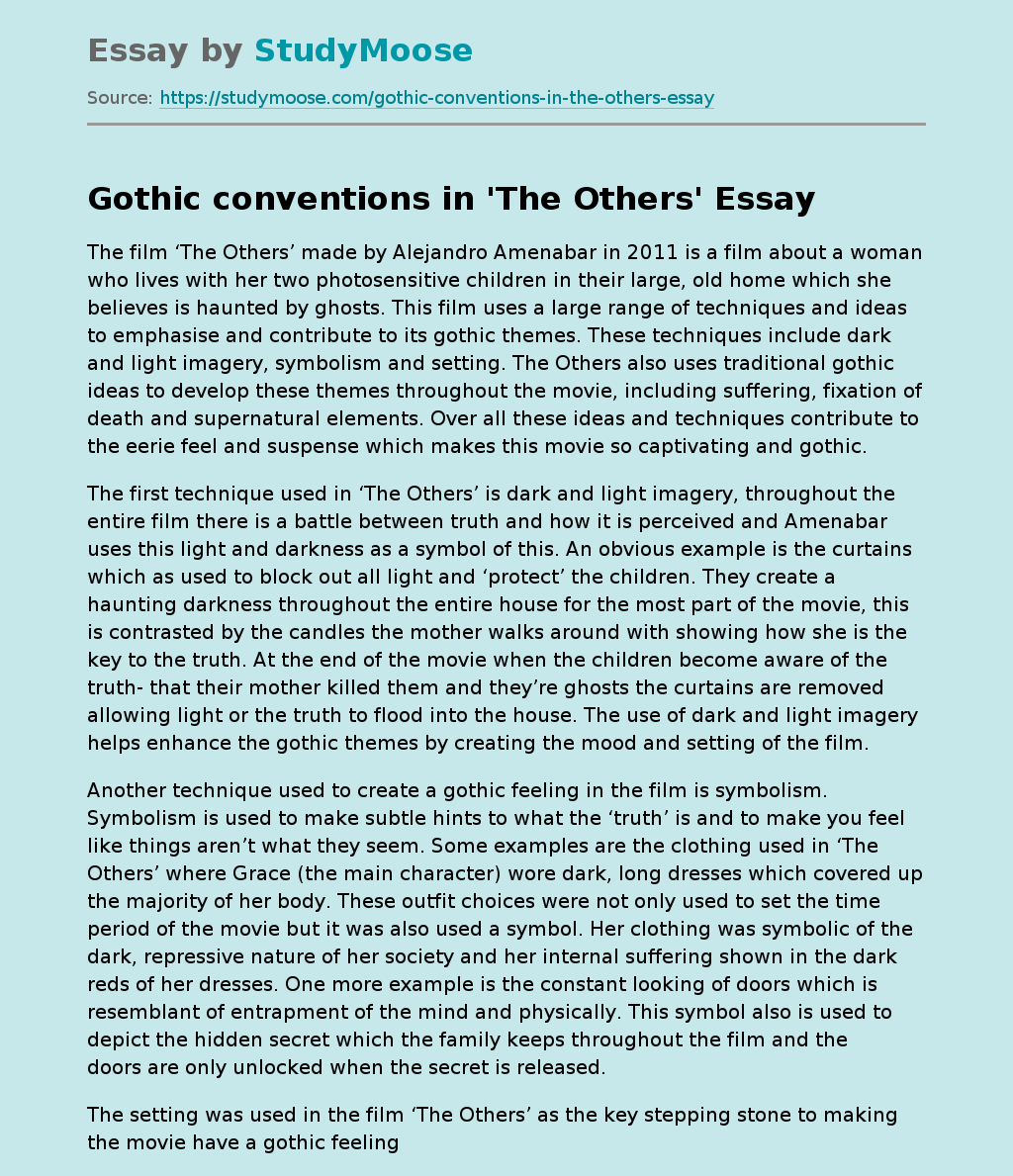