Tolerance, as defined in the dictionary, is a fair and permissive attitude toward those who race, religion, nationality, etcetera, differs from one’s own. In today’s society we misuse the word tolerance. In such examples as, I am very tolerable of so-and-so. So to emphasize the true meaning of tolerance, society should look at the events that took place in history. There has been no tolerance in races, religions, and other characteristics of human nature.

In AD313 the Roman emperor Constantine the Great decreed toleration of Christianity.

Twenty years later, Constantine the Great set the pattern of religious censorship that was to be followed for centuries by ordering the burning of all books by the Greek theologian Arius. After the emperor Theodosius made Christianity the established religion of the empire, the Roman government and the church began to persecute both pagans and Christian heretics who deviated from orthodox doctrine or practice. The pope was recognized as the final authority in church doctrine and government, and the secular state used force to compel obedience to his decisions.

Books or sermons that were opposed to orthodox faith or morals were prohibited, and their authors were punished. Not until the end of the 18th century did the ideals of religious toleration become firmly established in Western civilization. This “toleration” of Christianity, ruled out the ability of people to be able to practice other religions. However, in 1636, Roger Williams purchased lands from the Narragansett, tribe. Together with a few companions he established the settlement of Providence and the colony of Rhode Island, naming the settlement in gratitude “for God’s merciful providence unto me in my distress.

The government of the colony was based upon complete religious toleration and upon separation of church and state. Here, Williams gave freedom of people to practice the religion of there choice. Why, in today’s advanced society do we blame religions for acts of terrorism and begin discrimination against the religions. The example being use here is 9/11, and how the Islamic people were treated during the aftermath, and are still being treated. Religious beliefs are rarely tolerated in today’s society.

Elizabeth Eckford was one of the Little Rock Nine students. In 1957 nine black students desegregated Little Rock, Arkansas’s Central High School, despite strong resistance by many white members of the community. President Dwight Eisenhower called out federal troops to enforce the desegregation and to ensure the safety of the students. Eckford was interviewed about her attempts to gain entry to the school on the first day of term in 1957; here is her response: “At the corner I tried to pass through the long line of guards around the school so as to enter the grounds behind them. One of the guards pointed across the street. So I pointed in the same direction and asked whether he meant for me to cross the street and walk down. He nodded ‘yes.’ So, I walked across the street conscious of the crowd that stood there, but they moved away from me. For a moment all I could hear was the shuffling of their feet.

Then someone shouted, ‘Here she comes, get ready!’ I moved away from the crowd on the sidewalk and into the street. If the mob came at me I could then cross back over so the guards could protect me. The crowd moved in closer and then began to follow me, calling me names. I still wasn’t afraid. Just a little bit nervous. Then my knees started to shake all of a sudden and I wondered whether I could make it to the center entrance a block away. It was the longest block I ever walked in my whole life. Even so, I still wasn’t too scared because all the time I kept thinking that the guards would protect me. When I got in front of the school, I went up to a guard again. But this time he just looked straight ahead and didn’t move to let me pass him. I didn’t know what to do. Then I looked and saw the path leading to the front entrance was a little further ahead. So I walked until I was right in front of the path to the front door. I stood looking at the school – it looked so big! Just then the guards let some white students through. The crowd was quiet. I guess they were waiting to see what was going to happen.

When I was able to steady my knees, I walked up to the guard who had let the white students in. He too didn’t move. When I tried to squeeze past him, he raised his bayonet and then the other guards moved in and they raised their bayonets. They glared at me with a mean look and I was very frightened and didn’t know what to do. I turned around and the crowd came toward me. They moved closer and closer. Somebody started yelling, ‘Lynch her! Lynch her!’ I tried to see a friendly face somewhere in the mob – someone who maybe would help. I looked into the face of an old woman and it seemed a kind face, but when I looked at her again, she spat on me. They came closer, shouting, ‘No nigger bitch is going to get in our school. Get out of here!’ I turned back to the guards but their faces told me I wouldn’t get any help from them. Then I looked down the block and saw a bench at the bus stop. I thought, if I can only get there I will be safe.’ I don’t know why the bench seemed a safe place to me, but I started walking toward it. I tried to close my mind to what they were shouting, and kept saying to myself, if I can only make it to the bench I will be safe.

When I finally got there, I don’t think I could have gone another step. I sat down and the mob crowded up and began shouting all over again. Someone hollered, ‘Drag her over to this tree! Let’s take care of that nigger.’ Just then a white man sat down beside me, put his arm around me and patted my shoulder. He raised my chin and said, ‘Don’t let them see you cry.'” After hearing this account, many people respond, “Why didn’t she say something to that man who spit on her?” And that is a very good question, but Eckford was not going to degrade herself anymore, by getting a crude response. Races have also been affected because of 9/11. Along with no religious tolerance, Afghans have been treated terribly because somehow they are all ‘related’ to Osama Bin Laden, or Sadam Hussein. Again in today’s society we should certainly be over racial profiling, or prejudice.

Many little things have also created an issue with tolerance. It almost seems as if society tries to find something to pick on people about. Tolerance should certainly not be limited to races and religion, but to the little characteristics. One such characteristic could be handedness, which is a preference for the use of either the right hand or the left hand. Social pressures have had a considerable effect on handedness. A few decades ago in the U.S., using the left hand for writing was strongly discouraged, and only 2 percent of the population wrote with the left hand. Today in Taiwan, only 1 percent of the population writes with the left hand because left-handedness is socially condemned. Indeed, only in recent years has society become sufficiently tolerant of differences among people to accept left-handedness as a benign trait, and language still reflects the negative view that used to be held of left-handers. The word sinister, meaning “evil,” also means “left-handed,” and the French word for left (gauche) is also commonly used to mean “awkward.”

Left-handers are, of course, no more awkward than right-handers; any awkwardness or psychological disturbances observed in left-handers in the past could well be attributed to the problems that were created for them by an intolerant society. Many famous persons, including Leonardo da Vinci, Benjamin Franklin, and Lewis Carroll, were left-handed. Another characteristic of not being tolerant toward is age. A research study has clearly shown that the way you talk to elderly people is very important. ‘Baby-talk’ is frequently used in nursing homes, but the study suggests that it only robs the elderly of their dignity and is bad for their general well being and shows a lack of respect. All these have a very negative affect on their health, which in turn accelerates their physical and mental decay.

The childish ‘baby-talk’ also reveals the underlying attitude. The Association of Elderly Care says that some language terms should be eliminated from the nurses’ routine. Lastly, one characteristic that should certainly not be forgot is the type of job a person has. No one should be intolerable to anyone because they have a job that is useless, because there is no such thing as a useless job. There is a definitely a stigma surrounding janitors, especially school janitors. One janitor recalls, ” I’d run into old teachers and they’d always ask me what I was doing.

When I’d tell them that I was a janitor at the high school, their eyes would glaze over a little, like they were looking just beyond me. They’d start talking to me in pronounced, simple sentences as if I were a child. If you clean up other people’s messes for a living, you must automatically be stupid.” This is unfair. Unintelligent people work all kinds of jobs and not all of them are low-cost labor. So as you can see tolerance can also run into little characteristics such as what hand you write with, how you talk to the elderly, and what kind of job you have.

In summary tolerance is basically another word for respect. If you do not respect a person’s religion, race, or any other little characteristic of them, you are being very ignorant. By being respectful or tolerant of them, you don’t have to like them, you just have to acknowledge the fact that they are unique, just like you, and just because they may be different than you, you are certainly not inferior to them. So today when you meet a new person, take a minute to acknowledge the fact that they are different compared to you, in any characteristics, and that you will be tolerant of them.

Tolerance Towards Others. (2016, Jul 24). Retrieved from http://studymoose.com/tolerance-towards-others-essay 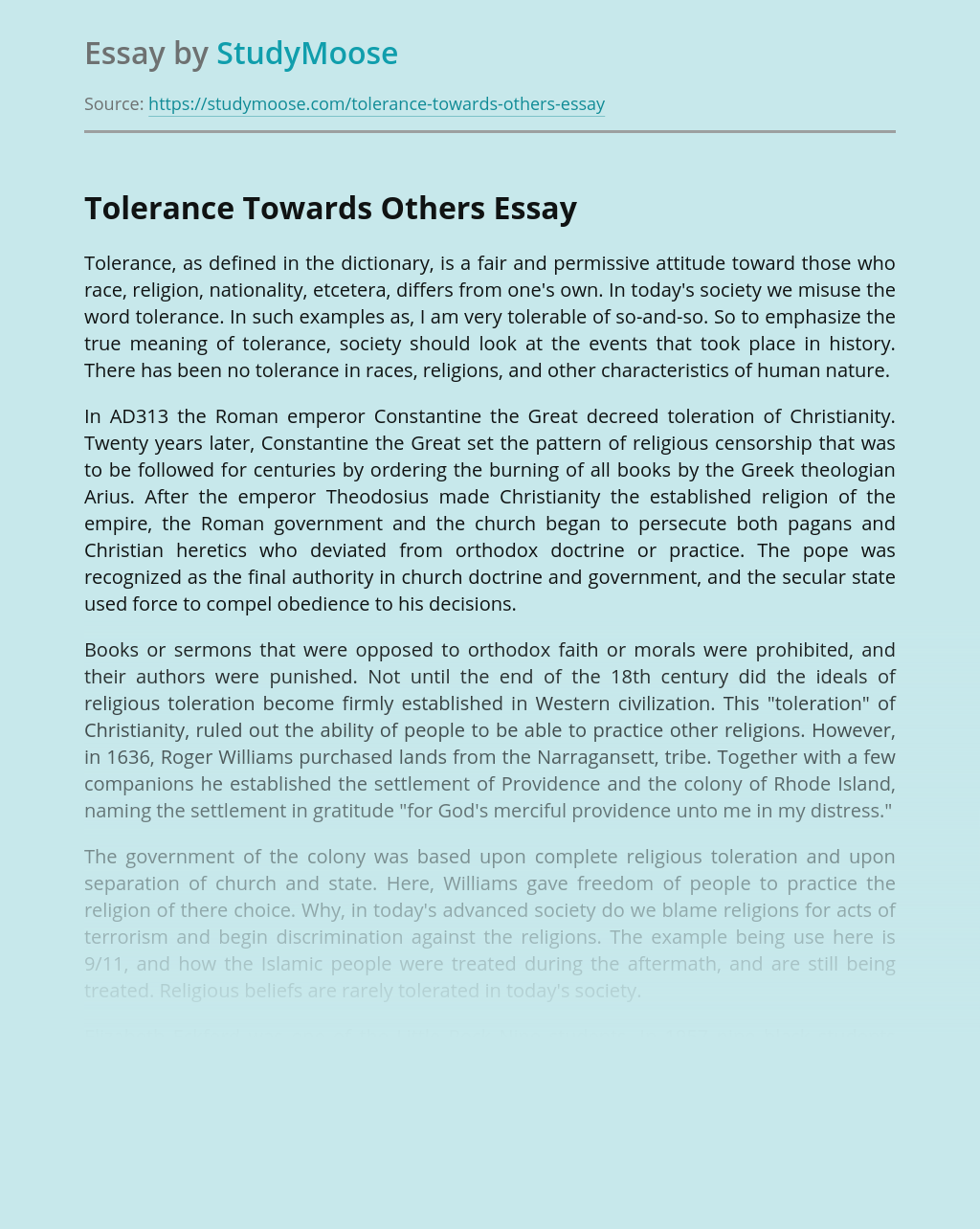 Don’t waste time
Get a verified writer to help you with Tolerance Towards Others
Hire verified writer
$35.80 for a 2-page paper
Stay Safe, Stay Original