There can be a great deal of confusion surrounding the words addiction, physical dependence, and tolerance. People will use these words as if they are referring to the exact thing, but there is a significant difference between them . Misunderstandings about these terms can not only be confusing for the general public but also many in the medical profession. One of the main culprits blamed for this confusion is the fact that the Diagnostic and Statistical Manual of Mental Disorders has chosen to use the word dependency instead of the word addiction and people assume this to mean physical dependency.

Turn in your highest-quality paper
Get a qualified writer to help you with
“ Drugs -Tolerance, Dependence, Addiction and Treatment ”
Get high-quality paper
NEW! AI matching with writer

Drug tolerance is commonly encountered in pharmacology, when a subject’s reaction to a specific drug and concentration of the drug is progressively reduced, requiring an increase in concentration to achieve the desired effect.

Drug tolerance can involve both psychological drug tolerance and physiological factors. The following are characteristics of drug tolerance: it is reversible, the rate depends on the particular drug, dosage and frequency of use, differential development occurs for different effects of the same drug.

Physiological tolerance also occurs when an organism builds up a resistance to the effects of a substance after repeated exposure Drug dependence is that it is a condition resulting from the prolonged and usually intense consumption of a drug or drugs which has resulted in psychological and/or physiological dependence on drug consumption.

This dependence causes significant problems in one or more areas of the person’s life.Humans adapt so well to having these substances in their system that they suffer negative consequences if the drug is stopped abruptly – these are referred to as withdrawal symptoms.

Addiction is a complex disorder characterized by compulsive drug use. While each drug produces different physical effects, all abused substances share one thing in common: repeated use can alter the way the brain looks and functions. Drug addiction is a dependence on an illegal drug or a medication. When you’re addicted, you may not be able to control your drug use and you may continue using the drug despite the harm it causes. Drug addiction can cause an intense craving for the drug. You may want to quit, but most people find they can’t do it on their own.What many people do not know trying a drug for the first time is that it can make you addicted after the first time you use it. People think to themselves, “I won’t be that person who gets all messed up on drugs”, they try it, and their hooked. Drug addiction is a serious problem we are facing in our culture today.

There are many forms of evidence-based behavioral treatments for substance abuse. Some of the most strongly supported include: Cognitive-behavioral therapy. CBT can help addicted patients overcome substance abuse by teaching them to recognize and avoid destructive thoughts and behaviors. A cognitive-behavioral therapist can, for example, teach a patient to recognize the triggers that cause his or her craving for drugs, alcohol or nicotine, then avoid or manage those triggers. Motivational interviewing. This therapy technique involves structured conversations that help patients increase their motivation to overcome substance abuse by, for example, helping them recognize the difference between how they are living right now and how they wish to live in the future. Contingency management. Using this method, addiction counselors provide tangible incentives to encourage patients to stay off drugs. Those rewards might include offering cash, clinical privileges, work at a steady wage or even restaurant vouchers for each clean drug test. Although these rewards might seem small in comparison with the force of addiction, studies have found that carefully structured contingency management programs can help people stay clean.

These behavioral treatments can sometimes be particularly effective when combined with pharmaceutical treatments that either mimic the effects of the drug in a controlled way (such as methadone and buprenorphine for opiate addiction or nicotine chewing gum for cigarette addiction) or reduce or eliminate the “high” the user gets from the drug (such as naltrexone for opiate or alcohol addiction). Drug abuse is an increasing epidemic in today’s society. There are so many types of drugs being abused today, both legal and illegal. These drugs affect the human body in many different ways. Drug abuse can lead to addiction. Drug addiction involves the repeated and excessive use of a drug to produce pleasure or escape reality despite its destructive effects.

Some medications used to treat pain can be addictive. Addiction is different from physical dependence or tolerance, however. In cases of physical dependence, withdrawal symptoms occur when a substance suddenly is stopped. Tolerance occurs when the initial dose of a substance loses its effectiveness over time. Addiction is a psychological and behavioral response that develops in some people with the use of narcotic pain medicines. People who take a class of drugs called opioids for a long period of time may develop tolerance and even physical dependence. This does not mean, however, that a person is addicted. In general, addiction occurs in only a small percentage of people when narcotics are used under proper medical supervision.

The use of and abuse of illegal and prescription drugs are affecting our health, our society, and creating law enforcement problems all across America. Drug usage is destroying the lives and homes of people each and every day. First, it shatters their lives, breaks families up, and takes away peoples hopes and dreams. Once drug addiction begins, an individual’s problems doesn’t go away, it causes their mental state as well as physical ability to continue to diminish from the immediate and long-term adverse effects from the drugs. They think while they are high that their problems are gone but when they come down from the high they realize the problems are still there. Old saying goes: ‘Once an addict, always an addict’. This is often stated by drug users themselves, and it may be more relevant than it sounds.

Like ‘recovering’ or ‘ex’-alcoholics, many dry alcoholics still state that they are alcoholic until the day they die. It is true that heroin addicts who have not used the drug for a number of years are still at risk of returning to drug use should certain circumstances arise. This may mean easy availability of the drug or painful life situations, or both. Throughout history there have been waves of drug and alcohol use. When new drugs are introduced into naive populations, there is a sudden rush of enthusiasm, followed by a learning process as the drug is assimilated by the community. However, the menace of drugs can be fought.Education is the first battle. Children need to be told at home and in school about drugs. People need to be aware of the effects so that they can make avoid this problem A second approach is to increase police manpower and powers to stop dealers and to enforce the law. However the main target should be the user. Families and counselors need to talk to children and people at risk. Parents need to look at their children and help them to become responsible. Jobs are needed to give people a role in society. 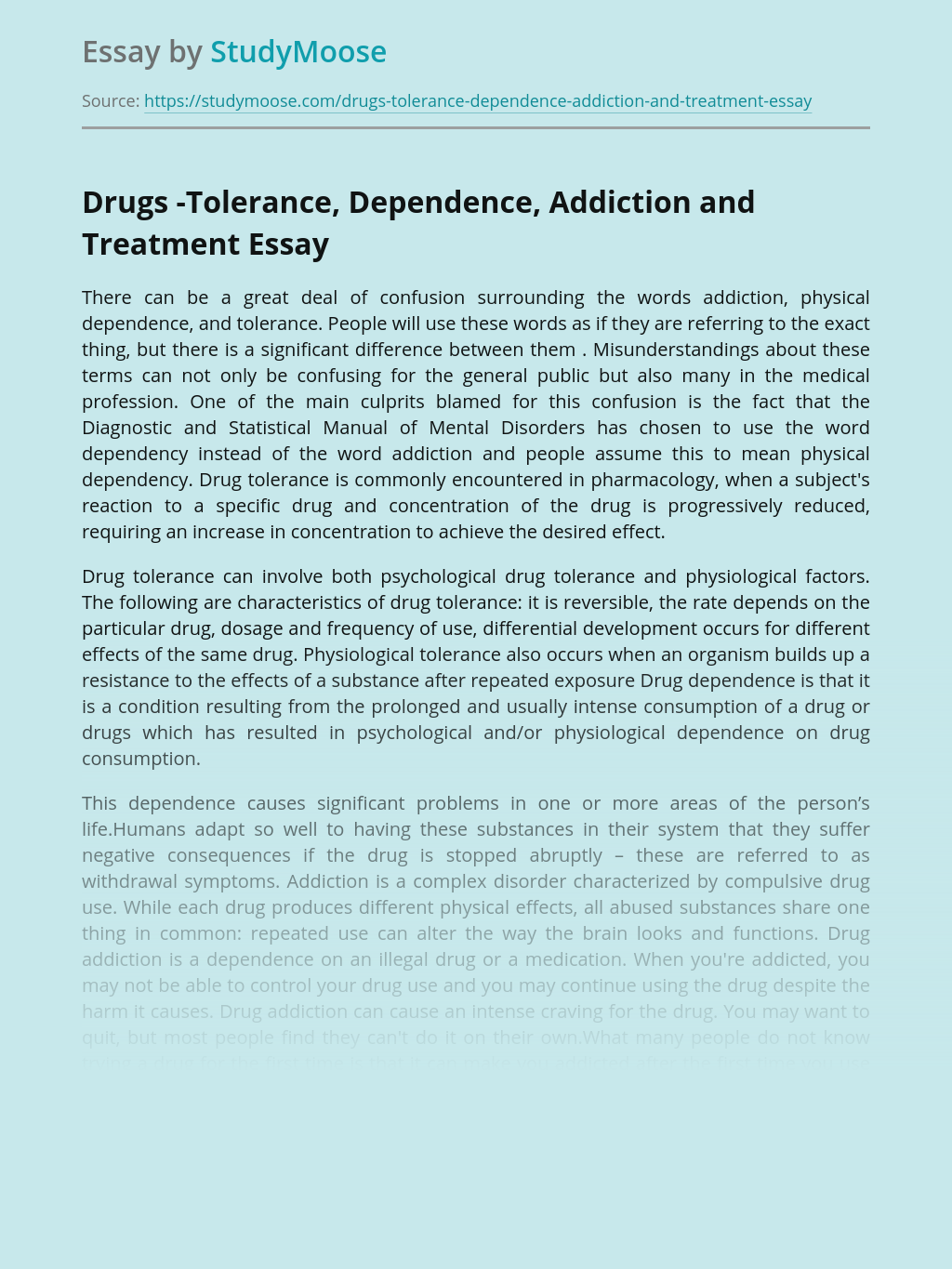 Turn in your highest-quality paper
Get a qualified writer to help you with
“ Drugs -Tolerance, Dependence, Addiction and Treatment ”
Get high-quality paper
Helping students since 2015
Stay Safe, Stay Original