Modernization theory is a theory used to explain the process of Modernization within societies. The theory looks at the internal factors of a country while assuming that with assistance “traditional countries can be brought to development in the same manner more developed countries have. This theory of modernization however failed because it can be argued that it was too Eurocentric in its methodologies. That is to say its centered focus was on Europe or European peoples. The theory never considered the Caribbean region or other third world when explaining its concepts.

Don't use plagiarized sources. Get your custom essay on
“ Dependency Theory ”
Get custom paper
NEW! smart matching with writer

This resulted in a paradigm shift from Modernization to Dependency.

The Dependency theory was established to provide the scholarly community with a different way of understanding the circumstances of the non-industrial countries of the world. According to Osvaldo Sunkel, dependency theory can be sociologically defined as an explanation of the economic development of a state in terms of the external influences, political, economic and cultural on national development policies. Therefore this essay would take seek to explain the advantages and limitations of the central new insight that is provided about development by the Dependency theory.

Dependency theory rejected this view, arguing that underdeveloped countries are not merely primitive versions of developed countries, but have unique features and structures of their own; and, importantly, are in the situation of being the weaker members in a world market economy, whereas the developed nations were never in an analogous position; they never had to exist in relation to a bloc of more powerful countries than themselves.

Dependency theorists argued, in opposition to free market economists, that underdeveloped countries needed to reduce their connectedness with the world market so that they can pursue a path more in keeping with their own needs, less dictated by external pressures. Prebisch, an Argentine economist at the United Nations Commission for Latin America (UNCLA), went on to conclude that the underdeveloped nations must employ some degree of protectionism in trade if they were to enter a self-sustaining development path.

Another advantage the Dependency theory provided about development is that it explains the reasons why the lesser developed countries are the way they are. The lack of development within the third world rest within the first world. Advocates of the Dependency theory agree that only substantial reform of the world capitalist system and a distribution of assets will free third world countries from poverty cycles and enable development to occur. Measures that the third countries could take would include the elimination of world debt and the introduction of global taxes such as the Tobin Tax. This tax on foreign exchange transactions, named after its proponent, the American Economist, James Tobin, would generate large revenues that could be used to pay off debt or fund development projects.

Also these third world countries could try to eliminate themselves from world debt by trying to stop depending on the financial institutions for loans. These third world countries believe that they are benefiting the country by taking loans from these institutions to support themselves economically. However, what these third world countries don’t realise is that these institutions are developed to make them take loans and go into more debt where they would have no other alternative but to depend on the first world for assistance, thus, leading to dependency and by extension further underdevelopment. For instance, Dominant first world countries have such a technological and industrial advantage that they can ensure the global economic system works in their own self-interest. Organisations such as the World Bank, the IMF and the WTO have agendas that benefit the firms, and consumers of primarily the first world.

Freeing up world trade, one of the main aims of the WTO, benefits the wealthy nations that are most involved in world trade. Creating a level playing field for all countries assumes that all countries have the necessary equipment to be able to play. For the world’s poor this is often not the case. The third-world debt crisis of the 1980s and continued stagnation in Africa and Latin America in the 1990s caused some doubt as to the feasibility or desirability of “dependent development”.

Vernengo (2004) has suggested that the sine qua non of the dependency relationship is not the difference in technological sophistication, as traditional dependency theorists believe, but rather the difference in financial strength between core and peripheral countries – particularly the inability of peripheral countries to borrow in their own currency. He believes that the hegemonic position of the United States is very strong because of the importance of its financial markets and because it controls the international reserve currency – the US dollar. He believes that the end of the Bretton Woods international financial agreements in the early 1970s considerably strengthened the United States’ position because it removed some constraints on their financial actions.

Although there are various advantages of the new central insight that is provided for the explanation of development, there are also some limitations. One of these limitations is that, the Dependency theory is a way of explaining economic underdevelopment outside of such industrially advanced parts of the world as North America and Europe. According to dependency theory, the politico-economic advantages of more technologically advanced countries are based on the disadvantages to countries that are and remain less developed. Critics of the theory claim that such an outlook is fatalistic, historically inaccurate, and simplistic. For example, parts of Africa, Asia, and South America are considered disadvantaged and underdeveloped. Yet all three areas previously were the locations of ancient civilizations of great cultural, economic, philosophical, political and social achievements. Dependency theory doesn’t come up with convincing arguments to account for how these areas fell by the wayside, and why areas in Europe and North America took the lead.

The Dependency theory explains how the countries are the way they are but they did not explain why and how they got that way. The theory just labelled these three countries as less developed because of their relationship with the more developed countries, it did not explain why is it that Europe and North America was able to develop and why is it Africa, Asia and South America wasn’t able to develop and how they lost their cultural, economic, philosophical, political and social achievements while North America was able to keep theirs and be considered first world countries. Another disadvantage of the Dependency theory is that doesn’t have all of its convincing points in order to relate to the theory’s implied invulnerability of development and simultaneous vulnerability of underdevelopment.

In other words, it emphasizes the importance of external forces on underdeveloped countries and minimizes the role of internal motivations within those very same countries. In most instances it is because of these third world countries internal forces they are underdeveloped. The reason for this because of the country’s small size it causes them to be vulnerable towards the first world dependence. Along with this, it can also be seen that most third world countries contain a high level of corruption which causes them to be in the situation that they are presently in. Advanced democracies like the UK, USA, Canada and Australia have virile electorates, media and criminal justice systems to combat corruption.

But Third World political and civil institutions are weaker, and in effect license corruption with impunity, thus allowing corruption within these countries to become effortlessly available. Along with this the Dependency theory likewise locks countries into a hierarchy of world leaders in which once an underdeveloped country, always an underdeveloped country. And the previous faults quickly become glaring when the dependency theorist tries to account for politico-economic changes within the Russian Federation, certain Middle Eastern countries, India, and China, to name a few.

In the final analysis, it can be seen that there was a paradigm shift from the Modernisation theory to the Dependency theory in explaining development. The Development theory provided the scholarly community with a different way of understanding the circumstances of the non-industrial countries of the world. Dependency Theory is in large part a theory of development in the third world, it seek to provide explanations for third world development and explanations that the Modernisation theory failed to give.

Like any other theory, the Dependency theory has its advantages and limitations. One of its strengths is its recognition that from the beginning, capitalism developed as a multinational system. Dependency Theory therefore spends its time on the question, “how can we have a development in the periphery that more resembles that at the core?” Or a more charitable account, if the core-periphery link is broken, can we have development in the periphery that has some or all of the elements that we identified as desirable in the core?

The Latin American Periphery in the Global System of Capitalism”, 1981, UNCLA Review 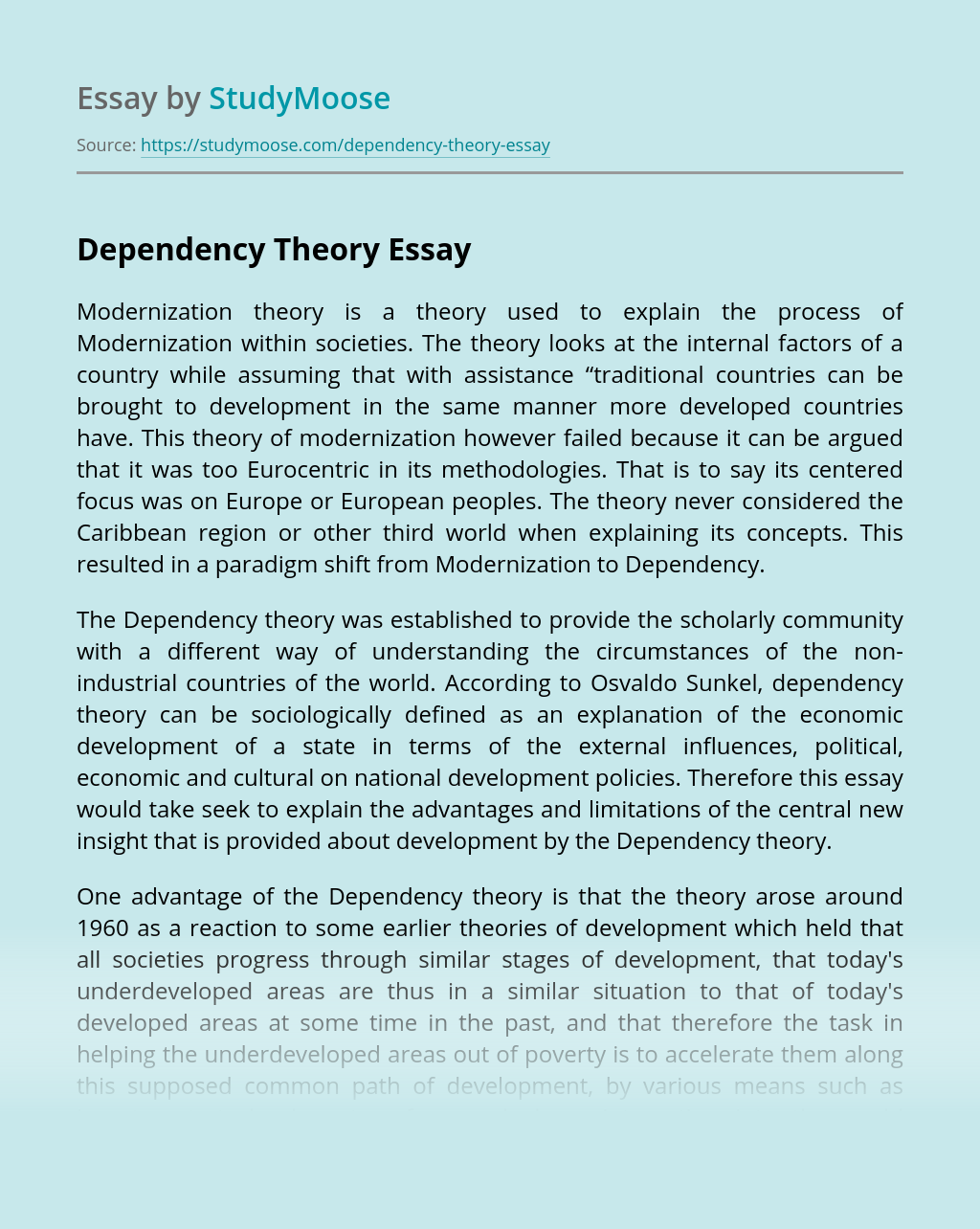