In psychology when the word development is mention to two theorists, stand out. These theorists are Sigmund Freud and Erik Erikson. Freud being the father of psychology changed the technique of studying the development of individuals. Erikson was influenced by Freud but he felt that be underestimated other significant dimension that shape our development. They both agreed that personality develop is mostly an unconscious process and when it does happen, it is over time and has universal stages.

They believe that personality is developing through a sequence of predestined stages.

Turn in your highest-quality paper
Get a qualified writer to help you with
“ Psychosexual stages vs. psychosocial stages ”
Get high-quality paper
NEW! AI matching with writer

In each stage, there is crisis that needs to be conquered in order to advance to the next stage in life. However, Freud believed the libido, person’s biology and basic needs are major factors in our development of personality (Simon & Gagnon). Although Freud’s theory influenced Erikson, instead he believed environment and culture were major factors that influenced our personality (Wallerstein, Robert & Goldberger, 2000).

Both have similarity within their theories as the age group are divided the same. Even so, they differ in way. Freud believed that the first three stages were the most important. He also understood personalities were developed by conflicts resolved and the demands from reality. Erikson believed all stage were equally important and cultural experiences helped develop personally (Wallerstein, Robert & Goldberger, 2000). They both had a different development process and outcomes. In order to grasp the theories, I will examine each theorist and personality stages individually.

In the first stage, that Freud called this psychosexual stage the oral stage and Erikson called this psychosocial stage the trust vs. mistrust stage. Both Freud and Erikson acknowledge the trust and dependency infants have to their mothers. In the oral stage, the child makes the connection between the mother’s presences with satisfying of their hunger. In the trust vs. mistrust, the child develops trust when they can depend on the mother to fulfill their needs thus developing a trustworthy relationship. However, these theories express different outcome when need are satisfied or not.

For Freud, the crisis here is weaning the child from the mother. As time progresses the infant begin to differentiation itself from their mother. The child comes to acknowledge there is no longer an umbilical connection and they a separate person from their mother (Simon & Gagnon). As a result, later in life they grow to be optimistic and passivity. On the other hand, if the infants who do not make the distinction turn out to be pessimistic, immature and gullibility and obsessed with the mouth. Some of these obsessions include biting nails, thumb sucking, and eating and drink obsessively and verbal aggressive.

This will cause the child to be controlling, stingy and stubborn. For Erikson, although toilet training is important the crisis in this stage is control and independence. If the child does not feel supported, they will develop shame and doubt. It is important that the child feel supported by parents in order to develop autonomy, the ego skill will, law, and order in respect to society (Cloninger, 2004).

In the third stage, Freud called this psychosexual stage the phallic stage and Erikson called this psychosocial stage the Initiative vs. guilt stage. Both Freud and Erikson recognize that at these stages the child finding identity with his or her parent, and sex difference. In phallic stage, the child begins to identify him or she with their parents thus acknowledges sexual difference. According to Freud, this process occurs through the Oedipus and Electra conflict. The Oedipus conflict is when the son wants to murder his father because he wants to be with his mother. The reason the wants to murder the father is for fear. He fears his father will discover the desire for his mother, and will be punished with castration (Cloning, 2004).

The child believe the more they are like the same-sex parent they will be able to replace the other parent. Thus the superego will develop and the end of the crisis. If the child cannot resolve this struggle they will have trouble forming the superego, sexual role identity and sexual confused (Simon & Gagnon). In the initiatives vs. guilt, the child acknowledges sex difference and parent identification through these social roles. According to Erikson, the child decided the person they want, affirm their power and control through playing and social contact (Widick, Parker & Knefelkamp, 2006).

The child must feel encourage to play and have social contact in order to have initiative. The child will also have a sense of purpose and learn ideal prototypes in society. However, if the child is not encouraged they will believe they are bad and have guilt (Widick, Parker & Knefelkamp, 2006). In the fourth stage, Freud called this psychosexual stage the latency stage and Erikson called this psychosocial stage the industry vs. inferiority stage. Both Freud and Erikson acknowledge the importance of development thought school. In the latency stage, the child develops into a more socially and academically driven person.

This helps the child become constructive. In industry vs. inferiority, the child works on tasks until they are complete. The child hopes to receive recognition for constructing something for society. During this stage, Freud explains that the child’s sexual drive is inactive thus there is no crisis. This is because there is a repression of sexual impulse (Simon & Gagnon). Instead the child use this repressed energy in to their social and academic lives. Yet, Erikson believes the crisis here is how to become a product individual in society. During this stage, the children want to learn new skill like reading, writing, counting and drawing (Widick, Parker & Knefelkamp, 2006).

Those children who are not encourage or praise for their accomplishment from their parents or teachers will develop problems with competence and self-esteem and inferiority. However, the children who are encouraged or praise for their accomplishment develop confidence, pride, competence and technological order in society (Cloninger, 2004). In this fifth stage, things are a little different. This fifth stage concluded Freud‘s psychosexual stage while Erikson had four left.

These stages are identity vs. identity diffusion, intimacy vs. isolation, generativity vs. stagnation and integrity vs. despair. I will compare and contrast these four stages with Freud’s psychosexual stage the genital stage. Both Freud and Erikson acknowledge the importance of building the self through previous experience through the genital stage and identity vs. identity diffusion. In the genital stage, there is no crisis but after being able to overcome each psychosexual stage now the individual can began to live a balanced life. However, sexual desires are no long dormant instead; they are strong sexual interest in the opposite sex.

Adolescences are in search of sexual or romantic relationships with other adolescences (Simon & Gagnon). Some of the characteristics that are developed include vanity, appearance and attention. For Erikson, the crisis here is finding self and personal identity. In order for an adolescence to establish a sense of self, they must go out and try new things. If the child is not encouraged, they can develop negative identity or identity foreclosure and identity confusion (Widick, Parker & Knefelkamp, 2006).

Nevertheless, if the child is encouraged to explore different roles, activities and behaviors the adolescence will be able to develop their identity, the ego skill of fidelity and learn ideological worldview in society and is able to move to the next stage (Cloninger, 2004). Erikson called this intimacy vs. isolation. Both Freud and Erikson acknowledge the importance of seeking a relationship with the opposite sex through their theories. In the genital stage, there is no crisis but latency has been conquered and the focus is seeking pleasure through sexual contact (Simon & Gagnon).

In Erikson’s intimacy vs. isolation, the crisis is finding love not sexual pleasure. Since the young adults have a sense of identity, they can seek an intimate relationship without fears of losing their identity (Widick, Parker & Knefelkamp, 2006). If a person does not find intimacy with someone, the young adult will become isolated. However, if they do find intimacy they will develop the ego skill of love and learn pattern of cooperation and competition in society and advance (Cloninger, 2004).

Erikson called this generativity vs. stagnation. Both Freud and Erikson recognize the significance of seeking welfare of life and society through their contributions. In the genital stage, as the individual mature in to adulthood, they are no longer just interested in their selves but others. In Erikson, generativity vs. stagnation, the adult want to contribution to society and that will ultimately outlive them. This contribution is range from children, social or political change or art (Wallerstein, Robert & Goldberger, 2000). If the adult is unable to cultivate a contribution then they will have sense stagnation, failure, disconnected or involved in their life.

On the other hand, if they are able to contribute they will feel a sense of generativity, develop the ego skill of care and learn currents of education and tradition in society thus move to the final stage (Cloninger, 2004). Erikson called this integrity vs. despair. Both Freud and Erikson identify this stage when the personality is complete formed. In the genital stage, the personality is well balanced in all aspects of the person (Simon & Gagnon). In Erikson, integrity vs. despair, the individual reflect on their life. When reflecting occurs if there are regrets or dissatisfied with life, they will have despair (Wallerstein, Robert & Goldberger, 2000).

However, if there is a sense of fulfillment then they will have integrity, wisdom as an ego skill and in society (Cloninger, 2004). Now that I have examined each theorist and their stage individually, it is clearly to see where there theories are similar and different. When compare the theories we are able to see why personality development is unconscious, slow and universal. In contrast, we can see how they differ in the process of development by recognizing the outcome.

Psychosexual stages vs. psychosocial stages. (2016, May 13). Retrieved from https://studymoose.com/psychosexual-stages-vs-psychosocial-stages-essay 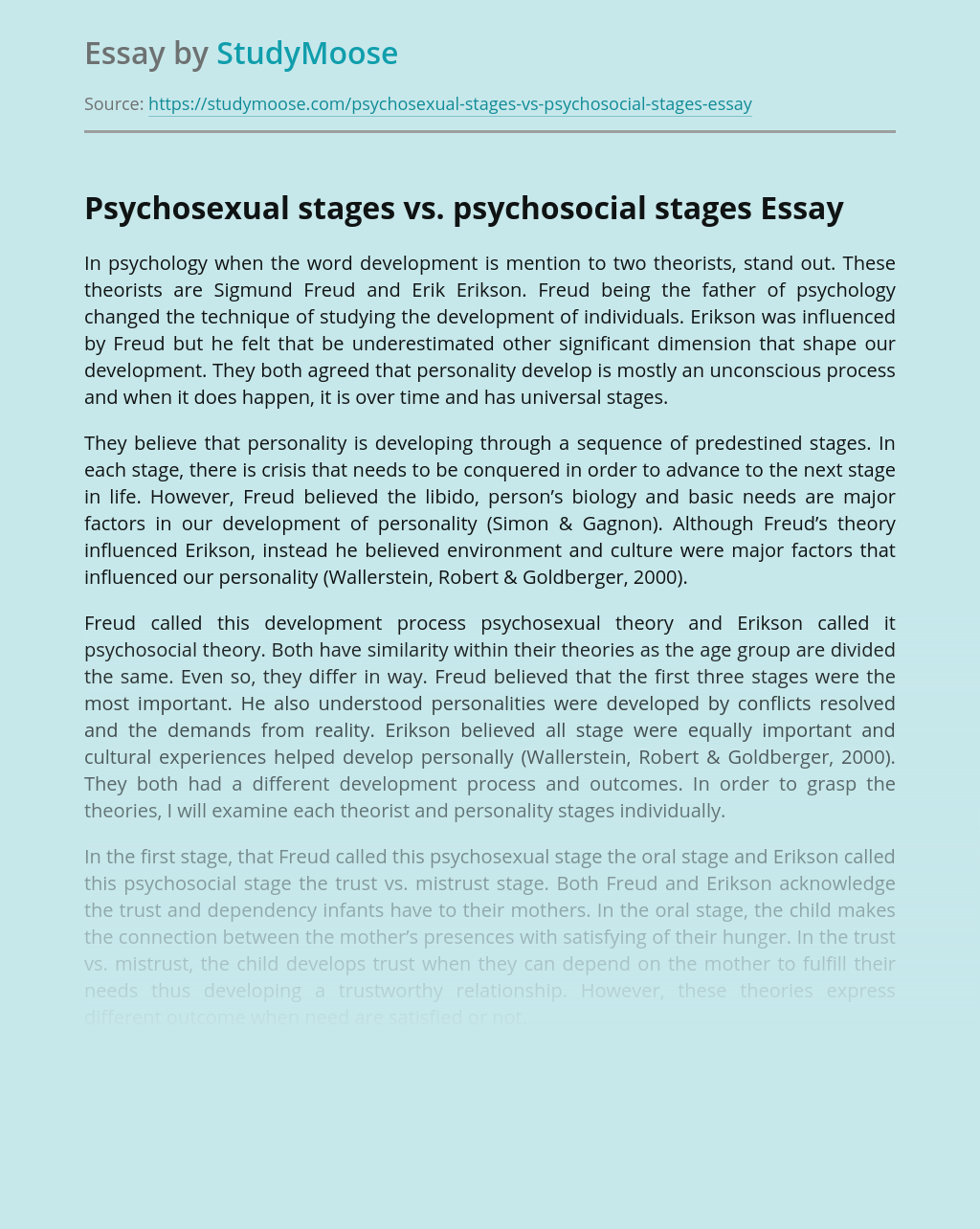 Turn in your highest-quality paper
Get a qualified writer to help you with
“ Psychosexual stages vs. psychosocial stages ”
Get high-quality paper
Helping students since 2015
Stay Safe, Stay Original