Critically compare and contrast Freud and Erikson’s stage theories of development, and debate how well each has been supported by research.

Although there are lots of similarities as Erickson theory of development is heavily influenced by Freud’s work, but it is also very different in its own unique way (Bee, 1992).

Don't use plagiarized sources. Get your custom essay on
“ Freud and Erikson’s stage theories ”
Get custom paper
NEW! smart matching with writer

This essay is focused on similarities and differences between these two theories and also research for and against each theory.

Freud (1905) proposed that child development happens in fixed stages, which he named as psychosexual stages of development. He introduced the concept of libido, which is concentrated on different erogenous zones during different stages of development. Freud believed that if psychosexual stages are completed successfully, a healthy personality is developed, but if a conflict is not resolved at any stage, a fixation can occur, which means that individual will be stuck at that stage until the conflict is resolved. Erickson (1958) also believed that development takes place in the form of predetermined stages, but instead of five, he proposed eight stages. He suggested that development of healthy personality is formed by mastering the inner and outer dangers and if a certain capacity is not formed at its schedule, it can have unfavourable consequences on the development.

According to Freud and Erickson, the first stage starts from birth and lasts approximately up to a year. Freud (1905) called this an oral stage and the libido is concentrated on the mouth area. The infant drives the pleasure from the mouth by sucking, feeding and biting. Freud believed an over oral stimulation leads to oral receptive personality which results in over dependent and self-centred individual. Whereas, under oral stimulation could lead to an oral aggressive personality i.e., scornful, greedy and pessimistic.

Erickson (1950) on the other hand, called this stage as Trust vs. Mistrust and suggests that during this stage; child is dependent on the caregiver for his needs and the quality of care defines the personality of the person. This stage is comparable to Freud Oral stage as Ericson believed that failure to develop trust between infant and caregiver will result in mistrust in the self and the world, which is similar to oral aggressive personality traits. But too much protectiveness can lead to over-dependence and gullibility which are also the traits of oral receptive personality. The balance is required to achieve a healthy personality by both Freud and Erickson (Gay, 1988).

According to Freud, the third stage of development, phallic stage is very important in a child’s development. This stage begins at the age of 3 until 5 and the focus of libido is at genitals in both sexes. The pleasure is gained through masturbation. The most important aspect of this stage is Oedipus complex; it is a conflict which appears in young boys as a result of sexual desire for their mother but restrain these feelings due to castration anxiety. The similar feelings girls experience for their father, which is known as Electra complex but instead of castration anxiety a girl experience penis envy. The fixation at this stage can lead to relationships problems in the later age (Wittels, 1924). Erikson’s third stage is initiative versus guilt and according to him, child takes more control of the world and successful completion leads to self-initiative personality and failure leads to sense of guilt.

The fourth stage in psychosexual development is Latent stage starts around 5 until puberty. It is supposed to be a dormant stage as libido is suppressed and child’s abilities are taken up in socialisation with the same sex and learning. Freud did not talk about fixation at this stage as the complex development of a child is completed by the third stage (Sulloway, 1979). The fourth stage in psychosocial stages of development is industry versus inferiority, and it is very similar to Latent stage as this is a stage of social interactions, sense of pride, and accomplishments. But unlike Freud, Erickson defined outcomes of this stage. Successful completion of this stage leads to self-confidence and failure can lead to inferiority complex.

The last genital stage in psychosexual development starts around the age of 12 to 18 years and libido is reawakened but in a more mature form and child looks for romantic relationships in the opposite sex. But unsuccessful completion of any of the previous stage can lead to inversion or even more complex sexual and personality disorders. This stage in psychosocial development is called Identity vs. Role confusion, during this period of development; children develop a personal identity and sense of self. The successful completion leads to fidelity and unsuccessful completion will leave that individual in a crisis of confusion about self and the world.

The major difference between Freud developmental theory and Erikson’s theory lies after genital stage as according to Freud no further development takes place and the rest of the life individual strives to keep the balance in all areas of life. The successful balance is hugely dependent on initial stages of development and fixation at any of the previous stage can lead to an unhealthy personality. Whereas Erickson proposed three more stages to cover the whole life span of an individual. Unlike Freud, Erickson believed there is plenty of room for personality growth and development after puberty and development of an individual continues till death.

There are several studies, which are focused on Freud’s developmental stages, some of these stages even got an empirical support whereas, other stages have been heavily criticised for being too illogical and unscientific. Yarrow found a significant correlation between the amount of time an infant spend on mother’s breast and thumb sucking in later life (Yarrow, 1973 as cited in Ulvund, 1980). Fisher and Greenberg (1977) also found that traits of oral receptive personality exist and such people crave for approval and support. They also claimed that although there are lot of traits which can be found in people as described in the five stages of development but it cannot be explained in the context of child development (Fisher & Greenberg, 1977).

Freud concept that an infant draws pleasure from feeding in an oral stage is challenged by Harlow. Harlow and Zimmerman (1958) used monkeys to provide evidence; they placed infant monkeys in cages with one wired monkey with food and one cloth monkey without food. Harlow (1959) suggested that if Freud is right then infants will spend more time with wired monkey as it has food, but experiment results showed that infant monkeys spent most of their time with comfy cloth monkey and only went to wired monkey when hungry and as soon as the need was fulfilled they returned back to the cloth monkey. Therefore, Freud’s claim of pleasure from feeding in an oral stage seems a bit dubious.

In contrary to this, Harlow published his paper addressed to psychoanalytic society of America that Freud is right about developmental stages but for all wrong reasons. He claimed that research on his monkeys unfolded some interesting facts. Harlow pointed out that an infant spends a lot of time on mothers breast, almost all of the monkeys which were reared apart from their mothers developed thumb sucking or toes sucking in the first few weeks. Harlow also noticed that in the anal stage, the same monkeys smeared their faeces over themselves, whereas, monkeys with mothers will not let their infant soil themselves (Harlow, 1964 as cited in Zamanian, 2011).

Erickson’s psychosocial theory also received some empirical support for some of his concepts. His first stage trust vs. mistrust is depicted in Bowlby’s study of secure and insecure attachment. Bowlby (1958) proposed that an infant forms an attachment with the caregiver and caring attitude of a caregiver forms a sense of trust in the child which is exactly what Erickson suggests in his very first stage of trust vs. mistrust. The children who have developed secure bond in infancy are more social and popular and observed to be more dominant and exhibit initiative (McAdams, 1989). The second and fourth stage of Erickson’s psychosocial development corresponds to attachment in children outside the home with peers in school. The fifth stage of Erickson corresponds to the attachment in adolescence and sixth stage is similar to attachment in adults.

Levinson (1977) studied Erikson’s seventh stage, generativity vs. stagnation and collected data from middle aged men. He found that 80% of his participants find it hard to resolve the conflict between inner-self and the external world. He found a positive correlation between individuation and generativity and also found that individuals generate more in order to leave behind more for their future generations. Osche & Plug (1977) studied concepts like trust, autonomy, initiative, industry, intimacy and generativity among different cultures to test universality of Erikson’s theory. Although, they found some differences but found a general support for each concept. Cooper (2010) studied initiative versus guilt and found support for the age group Erikson defined.

Freud psychosexual theory of development is based on his clinical work and most of the evidence is gathered from his patients. However, he did not describe the case studies in detail in order to maintain the anonymity of the patients (Storr, 1989). This is not a very good qualitative data and posses a big question mark on the validity of some of his evidence used. Also, it has been questioned, that whether it is appropriate to base the normal child development on the case studies of neurotics as Freud did not work with Children (Torrey, 1992). Erickson’s work also was largely based on observations and intuitions, mostly reflection on his own past and little data to support his stages empirically. Erikson (1968) himself accepted the fact that his theory was too subjective, and a result of his artistic sense and was not guided by scientific methodologies.

In Conclusion, Freud and Erickson both will be remembered as original thinkers and also for providing a conceptual framework of human development and personal identity in psychodynamic tradition. Although, the initial developmental stages of both theorists are very similar, Erikson expanded Freud’s developmental theory in his own artistic way and also broadened the concepts of development by adding social and environmental elements into it. Where Freud looked for pathological outcomes from each developmental stage, Erickson had a more optimistic view as he was more open to the positive resolutions of the identity crisis (Esterson, 1992). Unlike Freud, Erickson’s developmental stages give a second chance to the individual to improve themselves and allow the possibility of obtaining the opportunities misses earlier in life (Macdonalds, 1988). 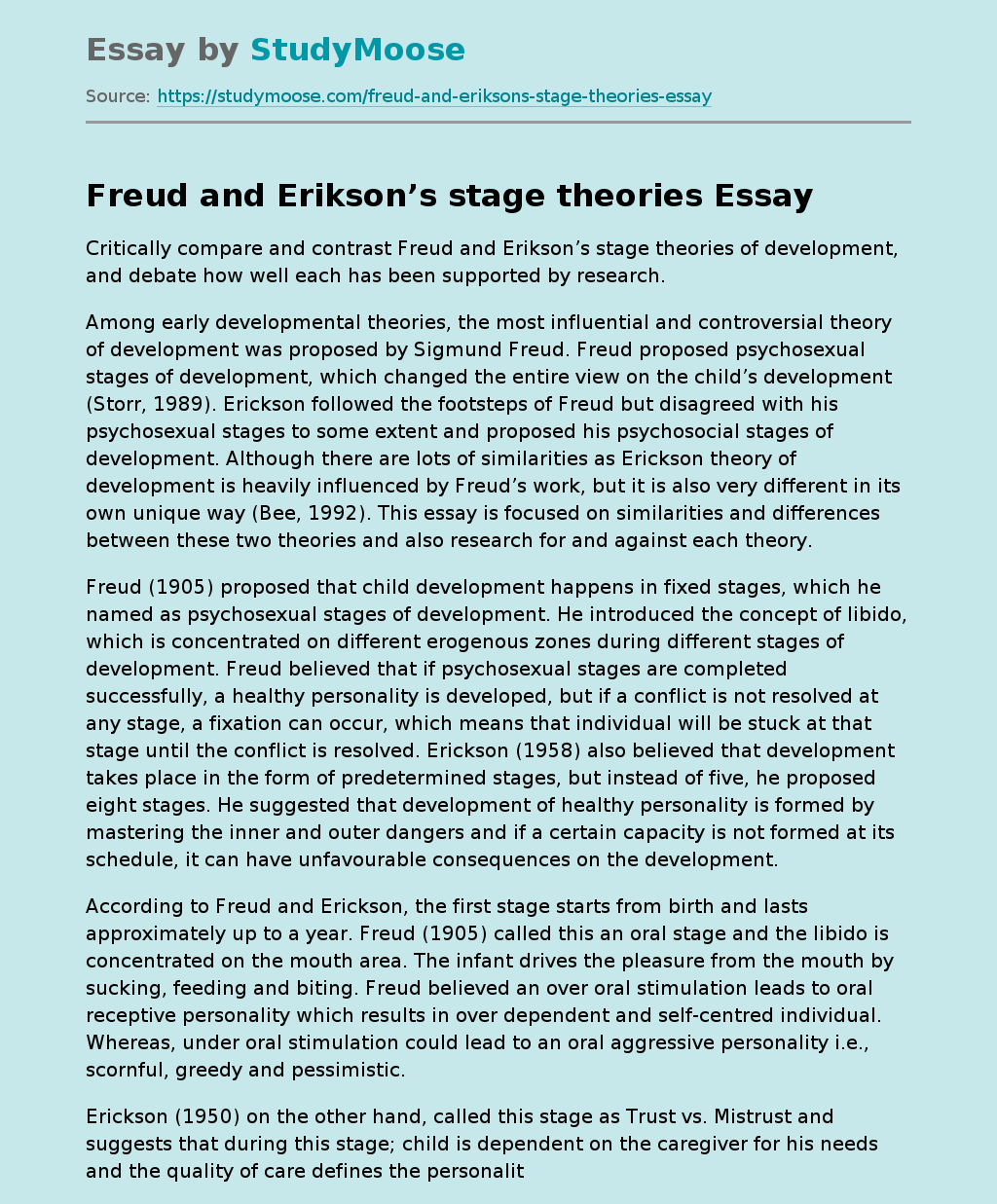