Erik Erikson stages of human development with a particular approach of the Identity crisis of adolescence and implications for youth policy and practice.

“They say is human to experience a long childhood, but is also civilised to have an even longer childhood as it leads the person to achieve more technical and mental abilities known as virtuoso; at the same time it can also leave a long residue of immaturity and emotional confusion” (Erikson, 1994- Erik Hamburger Erikson, 1902-1994).

Don't use plagiarized sources. Get your custom essay on
“ Erik Erikson Stages of Human Development ”
Get custom paper
NEW! smart matching with writer

In the collected works there was a researcher who spent a lot of time studying about human development and his name was Erik Erikson; most of Erikson`s work is based on real life situations such as the war and human depression which could influence the behaviour of one person, the author believed that the culture one individual lives in is also influencing their behaviour as an example of such arguments is Erikson`s study Sioux Indians investigated in a reservation.

Erikson argued that the human behaviour is influenced by the body interactions, by the human mind and the overall cultural influences (Marcia, 1966). Erikson developed a theory which states that there are eight major stages in the human development dividing the adulthood developmental stages into young adults, middle age adults and older adults experience.

The first stage Erikson described is the Infancy starting from birth up to 18 months also called the Oral Sensory stage and the main concept of the stage is emphasising the importance of love and care given to an infant by their mother as well as the visual contact and touch as the forms of communication and emotional exchange; this stage is also known as “Trust versus Mistrust” which stands for the infant`s basic needs accomplishment as when the infant`s needs are fulfilled by the mother as the role model the child will form trust and confidence where as if the basic needs such as visual contact are not offered by the mother it can lead the infant to develop mistrust in the closest person due to the lack of positive communication (Oswalt, 1995-2012).

The second stage starts at 2 and continues up to 4 years old is also known as the “Autonomy versus Shame and Doubt” which stands for the fact that the child is actually asking if their person is ok and accepted by the others due to the fact that he starts to explore the close environment and gains motor abilities; at this stage the children are developing their first interests and the parents still play a fundamental role in encouraging and supporting the child`s autonomy and independency skills (Erikson, 1970).

The third stage is also known as the Preschool stage “Initiative versus Guilt” starting at 4 until the child reaches 5 years old and although is a short stage the child development is significant as they start to master the nearest environment by achieving basic learning skills of life for instance the child learns that the things are falling down and not up. At this stage the child develops a certain level of independency and courage but at the same time they can develop some negative behaviour such as frustration, rudeness or aggressive intentions (Erikson, 1993).

Between 5 and 12 years old is the stage of “Industry versus Inferiority” when the child is asking if they have a place in the world and becomes more aware of the fact that they are individuals, become more responsible, start to share more and to cooperate better in certain situations as they understand the meaning and sense of life to a deeper extend, at the same time the child discovers new talents and interests (Erikson, 1980). The fifth stage is the Adolescence starting at 13 up to 19 years old also known as “Identity versus Role Confusion” which stands for the crisis the teenager might experience when identifying their own personality; it is the most critical period as it could influence the person` s life as it is characterised by confusion in most cases, it will be critically appreciated in the last part of the essay.

The sixth stage is the young adulthood starting at 20 up to 40 years old also called “Intimacy versus Isolation”, period governed by the conflict of love. Although, at this stage the identity crisis is coming to an end, the young adult can isolate because of the intimacy need and the fear of being rejected by the groups, overall the stage refers to the person`s need of finding the right partner for life (Erikson, 1990).

The middle adulthood starts at 40 up to 64 years and is also known as “Generativity versus Stagnation” and is characterised by the adult intention and concern of helping and guiding the younger generation so the main focus of the adult is to contribute towards society development by offering support to the new generation (Erikson, 1980).

The last stage described by Erikson is called the late adulthood starting at 65 till death also known as the “Ego Integrity versus Despair” when the adult is meditating upon their life events and what they have achieved throughout the life, if they realise that their life has been successfully will form integrity if not it can lead to despair and the feeling of failure (Erikson, 1980). One of the Erikson`s most talked stages of human development is the Adolescence which main focus is the teenager`s concern about how they look, how they are interpreted and accepted by their peers, friends and groups (Marcia, 1976).

Erikson claims that in the late stage of adolescence the teenager develops a sexual identity which will define them as a person for their future life; the teenager makes a transition from the child to adult life which will actually mark their future roles in the society. The first stage of the transition is marked by the confusion of who the teenager wants to become, who they are at the moment and how will they be accepted by the society as an example of such uncertainty is the teenager`s preoccupation to fit into small jobs, they will try different roles such as babysitting or catering assistants until they will decide what they want to become in the future.

Erikson claimed that eventually the teenager achieves a sense of identity but before that there is a crisis and a confusion stage which influences the teenager`s future decisions and interests; the period is critic as it can lead the teenager into bad groups, drugs, violence and other dangers since they are really confused and easy influenced so the parents must support and guide them towards the right path (Marcia, 1980).

Erikson believes the transition is marked by the identity crisis which makes the stage unique as it becomes a synthesis of earlier stages and a kind of anticipation for the adulthood life as the youth stage is a bridge between child and adult experience (Fletcher and Branen, 2009).

The stage is a radical change in terms of puberty, ability to search and find own life directions, awareness development of the society meanings and roles; the teenager is challenged to establish boundaries for themselves and this is when their identity crisis becomes hard to deal with, but Erikson believes the society will help and guide the adolescent to find their own way by offering different experiences which will impact the teenager`s interests and will define who they want to become as adults(Erikson, 1980).

The theorist claims the identity crisis might be prolonged for some individuals due to the society and because it takes time to achieve certain life skills, personal interests and form a clear overview of the adult life, so there is no exact deadline for the teenager to create a life strategy, but Erikson thinks that by the age of 18 to 20 the adolescent must know their own interests and head to a certain direction in life gaining a psychological and social stability (Fletcher and Branen, 2009).

Finally, Erikson thinks that the major impact and influence on a teenager identity crisis is the sociological environment the person lives in and the youth culture existing in that specific society, although the youth culture might be particular from a country to another or from a race to another, overall the youth policy needs to be SMART which stands for systematic, measurable, achievable, reliable and time related so that it will help the teenager to establish their own direction more clearly and investigate the opportunities they might have within the adult world (Kail and Cavanaugh, 2004).The way a teenager experiences the transition period impacts the future psychological, sociological and youth developmental skills, so Erikson believes it is fundamental what kind of “tools” the society and mostly the youth environment offers to the adolescent so they can choose from and establish their future path in terms of career opportunities, personality definition and overall place in the society (Oswalt, 1995-2012).

As the essay showed, Erikson made a comprehensive induction in the human developmental stages emphasising the meaning and role of each stage; the infancy is governed by the love and care offered by the mother to the child, as the child grows up they become more independent and, have bigger autonomy but yet they are uncertain about their place in the world as the second stage described, at the age of preschool the child learns the basic skills and define their ego in order to become more responsible with own interests and talents towards the fourth stage.

The fifth stage is governed by confusion as is the adolescence identity crisis when the teenager decides their future path, as a young adult the person will be interested in making a family and ensure they are loved; the middle age adult will be concerned in offering guidance, support and advice to the new generation of children but towards the late adult stage we saw that the retired person is concerned about their life events and motivated to meditate upon their life cycle. 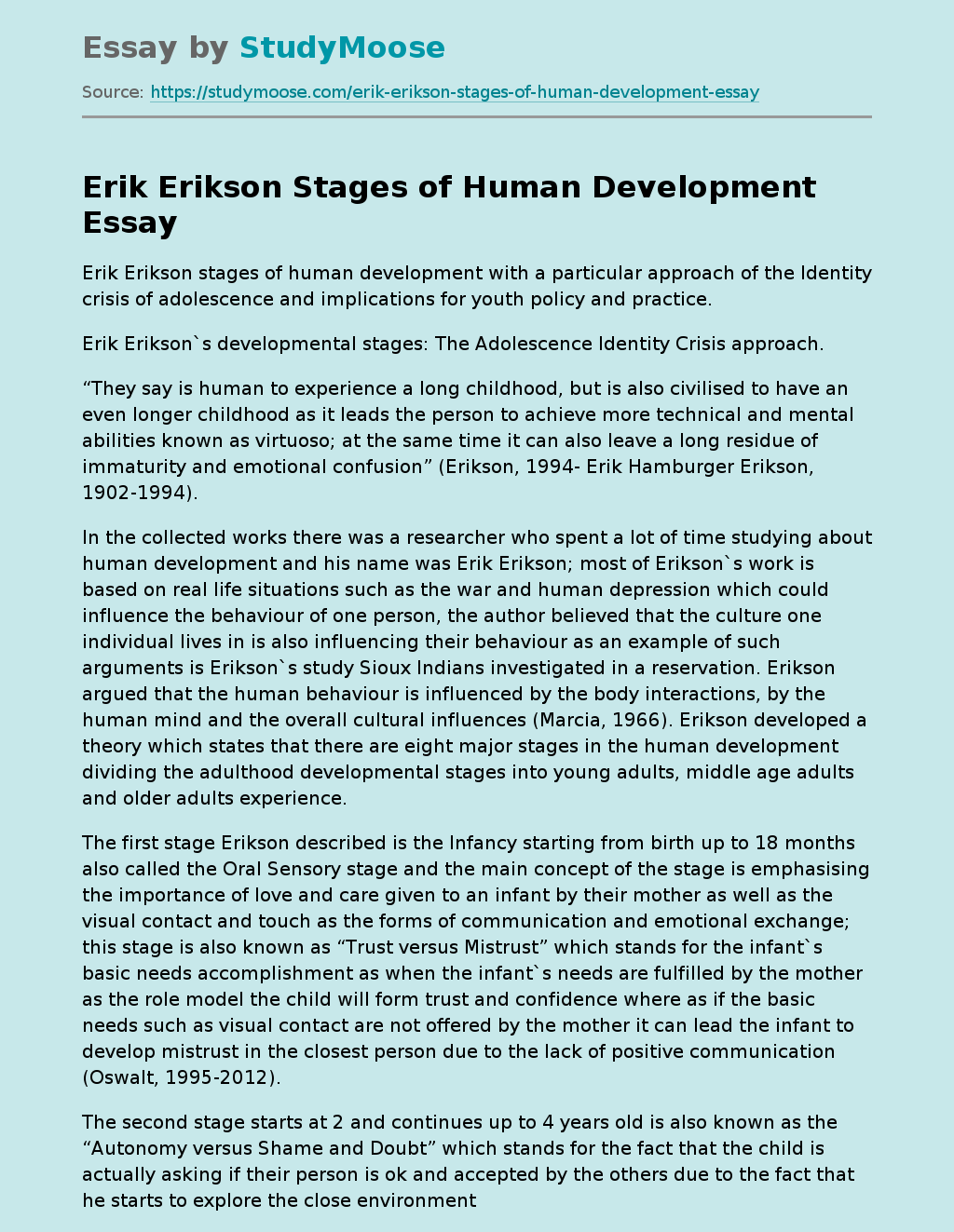