Erik Erikson is one of the best known neo-Freudians in psychological history.

He Grew up in Europe and spent most of his young adult life under the direction of Sigmund Freud. Erikson’s psychosocial development model was heavily influenced by Freud, and shares a number of central ideas from Freud’s psychosocial development theory. Instead of five stages, like Freud, Erikson came up with eight stages. The first stage, known as trust vs. mistrust, focuses on birth to roughly 18 months. Erikson also referred to infancy as the Oral Sensory Stage, which is the term Freud used for his first stage.

The major emphasis on this stage is the parent-infant relationship. If the parent was nurturing and loving, the infant would gain trust in the parent and vice versa. Erikson said that: “Hope is both the earliest and the most indispensable virtue inherent in the state of being alive.

If life is to be sustained hope must remain…” (Cherry, 2013). The second stage is autonomy vs. shame and doubt which is characterized by self-control, courage and will.

The general age is about 18 months to two or three years old. Children learn to master basic skills such as using the ‘potty’, walking, talking and feeding themselves. If children master these skills, they build a sense of confidence and autonomy. One of the worst skills a child learns during his or her “Terrible Two’s” is the ability to use the powerful word, “NO!”. If shamed in the process of mastering a skill or potty training, children tend to feel a sense of guilt and doubt; therefore, lowering self-esteem. From roughly three to five years old, children tend to observe and mimic adults around them and take initiative in creating play situations.

This is the third stage, also known as initiative vs. guilt. The child strives to gain the ability to do things on his or her own, such as dress him or herself. If “guilty” about making own choices, the child will experience guilt and won’t function well. The fourth stage is industry vs. inferiority. This is “school-age”, usually six to twelve years old. ‘Child compares self-worth to others, such as in a classroom environment’ (Wikipedia, 2013). ‘At this stage, we are capable of learning, creating and accomplishing numerous new skills and gaining knowledge, thus developing a sense of industry’ (Harder, 2002). If we feel inadequate and inferior among our peers, we can experience serious issues in terms of competence and self-esteem. In the fifth stage, development depends primarily upon what the child does and what is done to the child. Life is now definitely getting more complex as the child attempts to find his or her own identity, struggle with social situations, and grapple with moral issues. The age range is from about twelve to eighteen years old. This stage is known as identity vs. role confusion. This is also where the child tries to find him or herself and figure out his or her own identity.

The sixth stage of Erikson’s psychosocial development theory is intimacy vs. isolation. The average age is 18 to about 25 or 30. The young adult tries to find long lasting love and have mutually satisfying relationships with family and friends. Adults in this stage tend to generally begin to start a family. ‘If negotiating this stage is successful, we can experience intimacy on a deep level’ (Harder, 2002). The seventh stage is generativity vs. stagnation. This is during middle adulthood from about 35 to 65 years old. This is where work is one of the most crucial things in an adult’s life. ‘Strength comes through care of others and production of something that contributes to the betterment of society…’ (Harder, 2002). This is what Erikson called generativity. This stage is also notorious for the “mid-life crisis”.

This basically means that once the adult’s child or children has gone off and flew the coop, the parent now has to find new priorities to tend to and struggle with finding new meanings and purposes. ‘If a person is not comfortable with the way their life is progressing, they’re usually regretful about the decisions and feel a sense of uselessness’ (Wikipedia, 2013). This is what Erikson called stagnation. The last stage of Erikson’s development theory is ego integrity vs. despair. The adult is usually about 65 and it goes all the way to death. The individual has now reached the last chapter in their life. Retirement is steadily approaching his or her way or has already taken place at this time. Many have achieved what was important to them like graduating high school and college, getting married, raising a family and retiring from a great job. If the individual feels like he or she has done nothing with his or her life, a sense of despair will consume him or her. If he or she feels very positive about looking back on life, he or she will feel a sense of integrity. Erik Erikson’s psychosocial development theory is one of the best known stage theories in the psychology world. It does a great deal of explaining why humans act the way they act and why they are who they are. 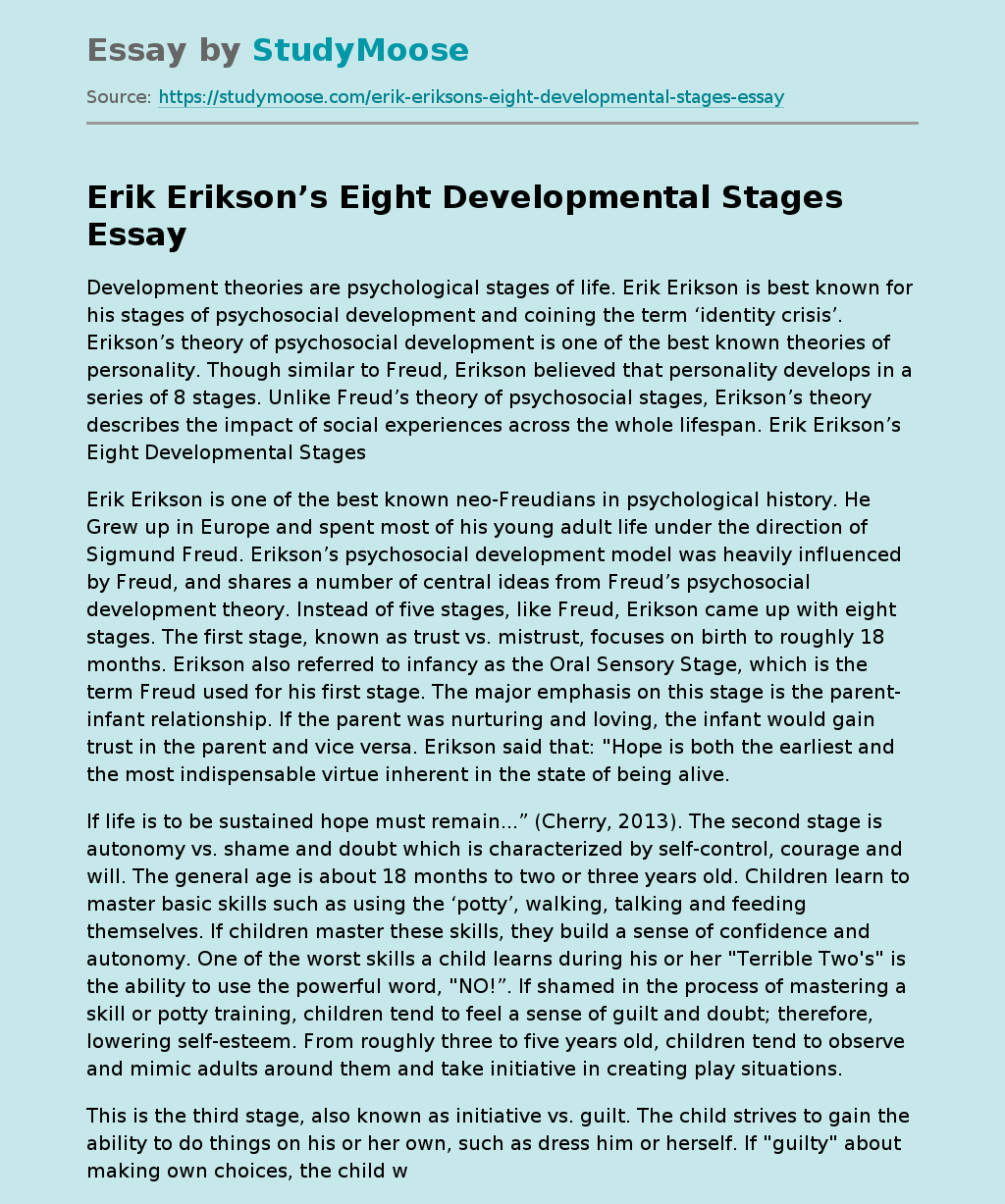